Noticed I had my LinX Europa game still posted - although not in its proper location, so I figured I should make it available in here where it after all belongs!

This is a very complicated rail network, developed before some of the changes with new graphis were implemented - (something that means way points and some stations may look a bit odd).

Anyway, this is the way I usually develop my TTDLX maps. Starting with a plan that during the playtime gets revised several times. As a result thereof an initial simple and "easy-to-understand" rail network tends to grow in the most mysterious ways with long tunnels and bridges, and finally ending up with a solution that I myself can't get a grip of after awhile. And especially after an absence...

Here is the link to the "old" LinX Europa showcase with more images, and below is the file itself. Please feel free to comment the rail network!
Top

Impressive.
However there is a bottleneck where traffic jam occurs easily. See picture below.


and also would you mind telling me where you got those station and tunnel graphics?
hope you won't mind me being too greedy

collingwood wrote:Impressive.
However there is a bottleneck where traffic jam occurs easily. See picture below.

The thing is that the last time I actually played this scenario I was planning to extend the "incoming goods" station area - which is basically the main reason for keeping trains waiting long times. As you can tell, a majority of the trains waiting at the so called "waiting area" south of the station area are "incoming goods" trains, and with a more sufficient system the station would work better. I also believe I had in my plans to create another line to somewhat minimize the bottlenecks when train arrives/leaves the station.

It should be noted that there are some problems with other station areas as well, but I need to take a closer look at the map in order to understand what I was thinking when building the system up...

However, since I played this map new patch features have been implemented and I'm looking forward myself to continue this map.

collingwood wrote:and also would you mind telling me where you got those station and tunnel graphics?
hope you won't mind me being too greedy

Sure, if only I knew what tunnels and stations you're talking about!

Oh silly me...I assume you refer to the image I posted myself above!

Actually, the station in question is made by Andres as a replacement to the in-game station, (made before we could actually use additional ones). It can be found HERE

The tunnel is worse. I can't remember exactly where I found it. Anyone else perhaps?
Top

if i release a bugfixed version of megarail the same as the original without the bits of tram track every where would any of you use it it would'nt have any of the other bugs trams introduced.
those tunnels are from the chezch rail set. i dont know if the tunnel only grf is still available as if you dwnload the whole rail set you get there tracks aswell.
Formerly known as r0b0t_b0y2003, robotboy, roboboy and beclawat. The best place to get the most recent nightly builds of TTDPatch is: http://roboboy.users.tt-forums.net/TTDPatch/nightlies/
Top

Actually, I managed to find the post were this tunnel was attached:

At last, I've managed to finish laying the tracks connecting all cities!
This game was based on one of my scenarios posted before
Have a look, although this isn't any tremendous network

Why go over hills when it's easier to go around them? And why so many tracks, you can run many trains down just two tracks. Your harbour crossing could easily be two tracks rather than 7.

Do you mean the exit signals when choosing platforms? Yes, I was finding the trains acting a bit strange when they line up stupidly without taking the empty platform, but I couldn't tell what's wrong.

So maybe I'll change them now.

EDIT
and how could you go around the hills? That will take a much longer distance if you consider a diversion
Top

collingwood wrote: EDIT
and how could you go around the hills? That will take a much longer distance if you consider a diversion

I have in game one train with income 2,6 milion.

collingwood wrote:Do you mean the exit signals when choosing platforms? Yes, I was finding the trains acting a bit strange when they line up stupidly without taking the empty platform, but I couldn't tell what's wrong.

So maybe I'll change them now.

I'm thinking a little more major than that. Your whole network is weird. Two one-way tracks are more efficiant than four two-way tracks.


collingwood wrote:and how could you go around the hills? That will take a much longer distance if you consider a diversion

With some of your layout it'd actually be more direct (cutting corners). Basically, (although I don't have your train grf's), it's faster to make the track longer than to make a train climb an hill, especially the 5-tile climbs you have.

I have in game one train with income 2,6 milion.

It works on the direct distance between the two stations, not the length of track travelled.
Top

A save of my lastest game in 1963. There's nothing terribly special here, I just thought it was a pretty spiffy network, being reasonably far-reaching and almost all steam-run.

Lemme know what you guys think. 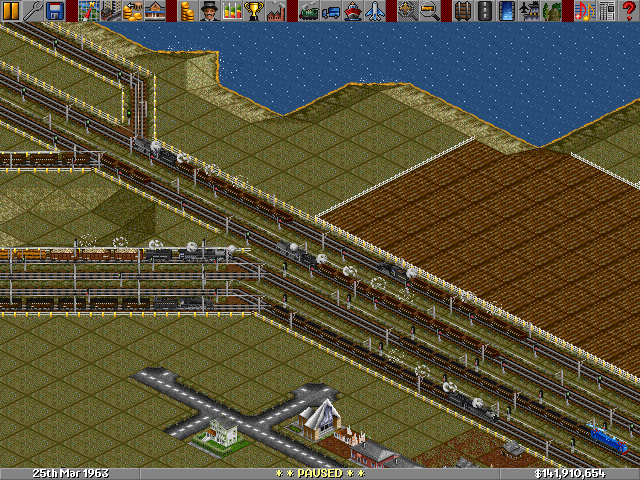 Together that causes it to become a bit sluggish.

how do i get more than the standard 240?
Top

My latest game with the US Set and one of Danmack's Sub-Arctic scenarios (North Country). When he said it was going to be hard, he wasn't joking! The year is 1977 I've only managed to squeeze in 49 trains, while there are 110 RVs, 12 planes and 26 ships in the game. Also, I've used the towngrowth values on the TTDPatch manual, so don't be surprised at the unusual number of big towns on the map.

Quite a lot of GRFs are used, but only a few are actually required to play the savegame (namely the ship, RV, plane and train sets).

To install:
Unzip the cfg and savegame files into your main TTD folder and the TTDPatch shortcut into any folder of choice, edit the address bar of the 'AresPatch' shortcut according to the location of your TTD folder and finally run AresPatch to play.

EDIT: Reuploaded with a savegame in 2024.

All these savegames look great

But none of them work for me, I put them in the right place but TTD cant see them

have you got the patch. Also are there numbers with an underscore bfore them, if so remove those numbers aswell as the underscore.
Formerly known as r0b0t_b0y2003, robotboy, roboboy and beclawat. The best place to get the most recent nightly builds of TTDPatch is: http://roboboy.users.tt-forums.net/TTDPatch/nightlies/
Top

Works now, thanks.
Numbers and underscore were the problem.
Top

Ive made an update to Owens Orkney scenario that he made before the patchs day. All ive done is made it ukrs industry compatable. so you jjust need that and the newcargo switch on in your ttdpatch.cfg

Formerly known as r0b0t_b0y2003, robotboy, roboboy and beclawat. The best place to get the most recent nightly builds of TTDPatch is: http://roboboy.users.tt-forums.net/TTDPatch/nightlies/
Top
Locked
1272 posts