oops, didn't even notice that. i must have thought i was on the latest page when i was on an older one, sorry for that!

Where I live there are 126 & 127s from Dewsbury to Wakefield and the 232/231 Wakefield to Huddersfield, with a 268 to Bradford from Wakefield too (a few more but they're mostly smaller shuttle ones). The Huddersfield ones are every 30 minutes and never run on time, i don't even know why they have timetables. The 126/127s are every 10 minutes, so naturally bunch up a lot. The 268s are also every 15 minutes, but amazingly don't bunch up all that much, despite the slightly ridiculously long route to Bradford and going through lots of estates and housing areas where there are people getting on every stop for 10 minutes.

My address is a Wakefield City Centre one, so i'm near enough to just walk into the city centre, but to get anywhere else i have to use the godforsaken buses. Really annoyingly, the 231/232s are operated by two different operators, early morning and late evening services are by First, the rest are by Yorkshire Tiger, one of Arrivas companys. So if you want to go out between companies you have to fork out £6.40 for a ticket for all companies instead of just £4.50 for the Tiger services during the day. It doesn't exactly scream "use the buses, save the planet, don't use cars!"

026 - the first to go - arriving at her final destination.

Contrary to that Braggart Lei’s view I’m not a crank! But I was gutted by this pic. It just feels so final.

I saw them twice tonight but my timings didn’t work out to have one last spin. I got two last rides in on Friday. Weather is about right for their demise.

Is there something fishy in the tunnels being bored for Crossrail? Some workers seem to think so, after five workers have died in their sleep over the past six month.

The Class 313 Goodbye tour is next Wednesday, and there's been a little surprise for us all.... 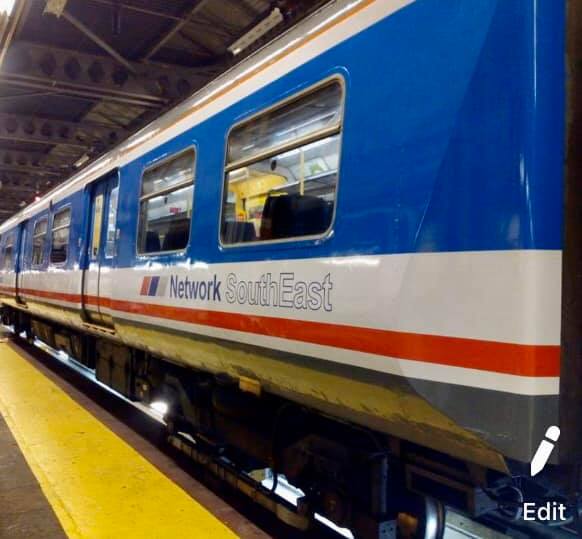 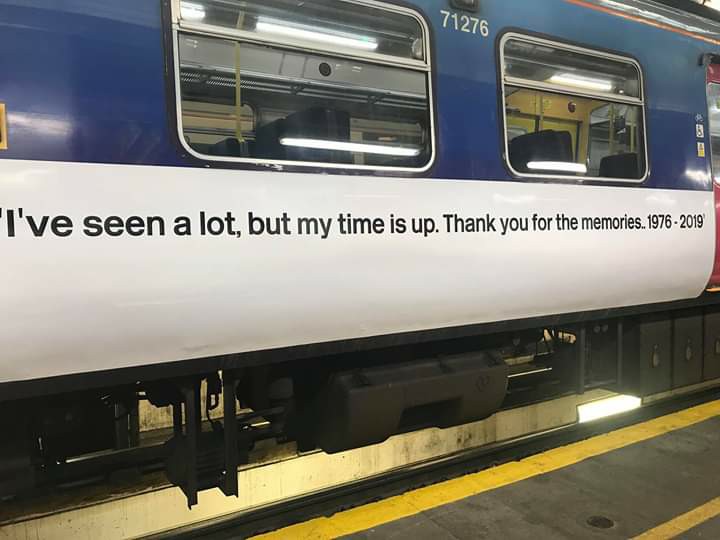 Aw, that ruins my chances of ever completing the 313s on myl ist of seen units. Been trying to get them as i visit the south, but it s only a few at a time

The NSE looks gorgeous and has reaffirmed the commitment to get out and see it.
Official TT-Dave Fan Club

This week, our class 313 fleet officially retired after 43 years in service. The last two units ran a special 'Farewell Tour' across the route.
I was able to find the time to see it a for an hour, and of course get some photos of it as the front of 313064 had been specially painted in the old Network Southeast livery.

Of course, being the geek I am with old railway stuff, I got an old manager of mine, with my DSLR, to get a picture of me standing by the last unit. But after looking at the photo when I got home, it suddenly felt very special to me..
Now most friends saw it as 'just another photo'. But to me, I ended up seeing something meaningful to it.

To understand why.. bit of background info! The livery in the photo, for those who don't know, is the old 'Network Southeast' livery which existed through the late 80s and early 90s in the final years of British Rail.
Now with that in mind, back in the early 90s, I saw these units and that NSE livery all the time up and down the line. Along with 317s, 365s, and Intercity 1252/225s. That's still all a very strong memory I have as a child seeing those colours.
When I was young there was always that childhood dream of being a train driver,plus seeing that livery again is amazing!

So! To look at a photo and think "I use to see that as a child and dreamed of driving that..." then seeing myself, as a driver for those units and previously driven that very train before, standing along side it... that's something very special to me!
Sadly no, I didn't get to drive the tour! But I have plenty of trips on 313s and memories of breaking them to last me forever anyway

That didn't take long. One of the new Azuma (800109) trains has collided with a HST (43300) on approach to Neville Hill Depot, in Leeds. No injuries reported, and both trains were not in passenger service. I suspect the Azuma will be going forr a lengthy repair after that, i suspect some damage may have been done structurally with the way the carriages have twisted, given they're fixed setups so you can't just swap a carriage out like a HST. 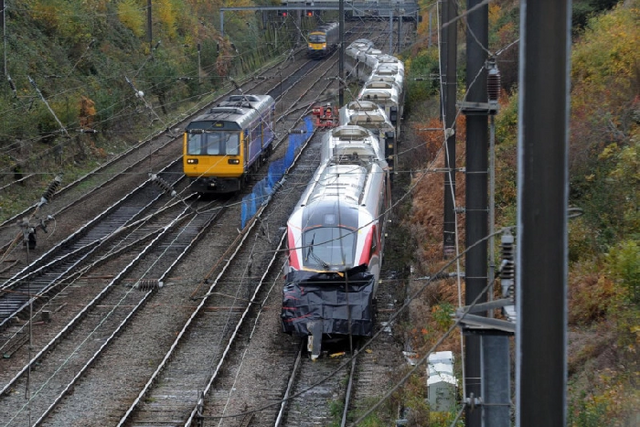 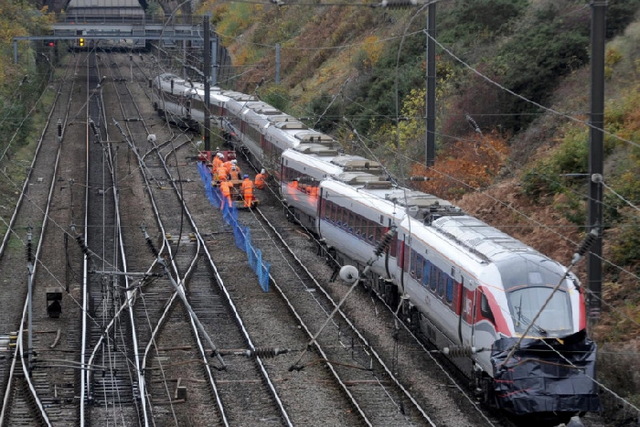 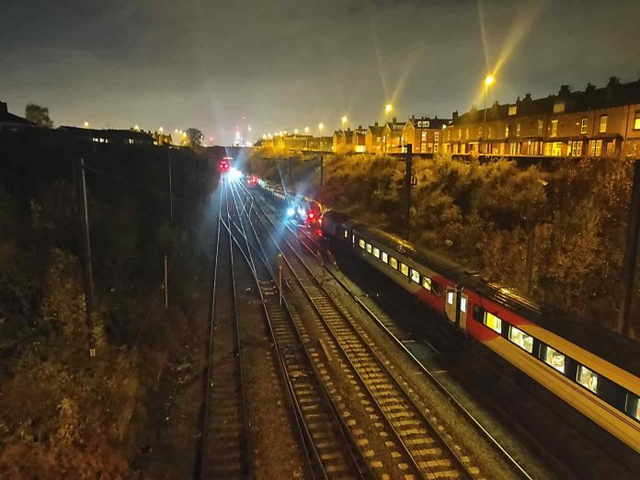 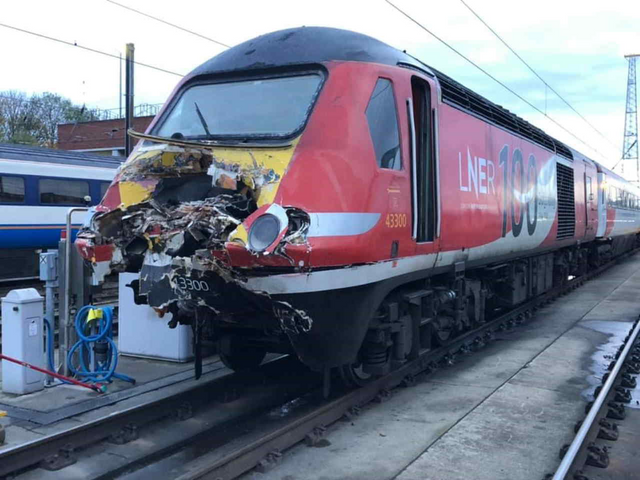 Both look worse than they potentially are due to the fibreglass which is designed to crumple.

Some rumour of damage further down the Azuma. As for 43300... the first HST withdrawals were due in a couple of weeks. The loss of the Azuma set notwithstanding, this potentially indicates a bleak future for the loco. It might not be repaired.
Official TT-Dave Fan Club

I'd say almost certainly write that HST off. Given that they wrote one off last month with lesser damage after being shunted by something.
Fair to say, I don't think they're having the best of times at the moment
My Photography - YouTube
Top

Have heard that there's a fair bit of underfloor damage, which would make some sense. Good job the production line is still open and spares are still plentiful.


Dave wrote: ↑17 Nov 2019 13:25As for 43300... the first HST withdrawals were due in a couple of weeks. The loss of the Azuma set notwithstanding, this potentially indicates a bleak future for the loco. It might not be repaired.

Well, this particular power car was earmarked as one going to EMR, can just see it being swapped for another one that wasn't meant to be going though.
POTM August 2012 Joint Winner
My Screenshot Thread
Top

There’s the other Azuma which was involved in a very, very nasty incident which caused rather a lot of damage to the pantograph and underfloor (I don’t think I need to elaborate) and has been out of action ever since.

A couple of rumblings these incidents might point to their fragility, although both cases are pretty unusual, and as I said the Azuma nose cone is designed to crumple.

So the anti Azuma wibble is a bit of a nonsense.
Official TT-Dave Fan Club

The main thing I've looked at when it's come to this incident is whether the actual passenger carrying part of the train suffered any significant damage. Looking at all the images I've see, the actual shell appears to stood up very well, with the picture seen of the nose before it was covered showing the bulkhead behind the coupling having suffered very little to no damage (as you say, the nose cone as worked as intended in it's crumpling). In an accident, I'd happily have the bogies, traction motors, engines, pantograph's, nose cone etc. suffer significant amounts of damage (as long as this didn't cause a fire through a fuel tank rupture or similar) as long as the passenger carrying parts remain intact and safe. After all, a train is replaceable, a human life is not.

It's like when the 390 derailed at Grayrigg. It looked a mess as a result, but the actual passenger carrying areas themselves stood up to the punishment and kept the people onboard safe. And to think that these no longer live up to modern crash regulations. Didn't the anti-unit brigade come out then too?

Of course, I'm sure the RAIB will investigate this, and no doubt enlighten us further in both the cause, and resultant damage (I'm not a structural engineer, so my assessment of the integrity of the train means zip, so there is a strong chance the RAIB will have a different opinion to myself) that has occurred as a result of this "bump".

The unit-basher in me is also hoping that the unit isn't a write-off. Still need it for travel! (Not so fussed about 43300, had over thousand miles with it)
POTM August 2012 Joint Winner
My Screenshot Thread
Top

Going by some whispers I've heard.. I wouldn't count on that

Grayrigg though.. good grief yes, that really proved that 390s were built like tanks. Was only 2 coaches that weren't returned to service I believe?
Fortunately we've never seen anything quite as serious as that since, and hopefully won't again. Though I have had worries in recent times.
My Photography - YouTube
Top

Well... What will RAIB tell us? "Driver A misjudged the braking distance and the trains collided"?

They won't report if there's no learning points. I don't think the criteria for a mandatory report will be reached here.

033 largely survived but was formally written off after Grayrigg. There's wide consensus that a similar incident with 87+mk3s would have led to several (if not more) fatalities.

Ultimately, the front of that Pendo hit a soft field, not a 400 ton train with brakes and handbrake on. Comparisons aren't THAT useful, although the passenger survival space wasn't impacted in the slightest, so I understand. Expensive day out still...
Official TT-Dave Fan Club

Well, given potential mitigating factors regarding leaffall (that track doesn't see an RHTT (should still be done by hand however)), driver fatigue, etc., as well as the relatively higher profile nature of this incident, I'm surprised they haven't wanted to look into it further, if only to put the travelling public's mind at ease. Even if a mere safety digest were to be released, it's better than nothing. Heck, they release a safety digest every time there is a bit of human idiocy when passenger's decide to "self-evacuate" themselves onto open lines..
POTM August 2012 Joint Winner
My Screenshot Thread
Top

See I'd argue that the same could be said for a lot of reports.
Buffer stop collisions, trap and drags, SPADS etc. Most of them are all pretty simple results majority of the time

A Ukrainian plane that crashed yesterday (Wednesday 8th) may have been shot down by a missile from an Iranian source, is what is currently being reported by the US media, usually citing 'officials' as the source.
There were no survivors of the accident, 176 passengers and 9 crew were killed.

If this is proven to be true, it might be another unpleasant escalation in an already tense situation

Was confirmed here (https://www.bbc.co.uk/news/world-middle-east-51073621) this morning. The Iranians admitted they shot it down in error. Not the best plan to have a SAM site 1 mile from an airport. The site"s targeting was automatic and recognized the aircraft as hostile.
Top
Post Reply
1939 posts