I'll be flying with Aer Lingus Regional from EGPF to EIDW on Saturday, returning the Wednesday after.
Top

I know IATA codes (easy, most people do), but not many ICAO codes (well apart from EGLL).
Screenshots

I have never been to GLA but DUB is quite nice.

Ameecher wrote:JetStar A320 from Auckland to Christchurch. Cramped and all in all not great. We're already for boarding and then a crew member is taken ill, then when we finally board an hour later the tyre on the right landing gear needs changing so we get de-planed for another hour. Admittedly beyond Jetstar's control but they could have provided better customer service.

Should have flown Air New Zealand.

Bah, flight with jetstar was $39 hand luggage only whereas the same flight with Air New Zealand that ran 10 minutes later (in theory) was $89 but did have hold luggage included, and bigger seats and food. Still for what was a 1h30m flight, I didn't care too much about the lack of food and leg room.

Class 165 wrote:I know IATA codes (easy, most people do), but not many ICAO codes (well apart from EGLL).

Well, I know EGPF as it's my home airport, but I had to look up EIDW. I use IATA mostly, but I felt like being weird!

Much annoyance at the dead mileage incurred - plus the connection at Rome was so tight, they only managed to load 3 out of our 4 bags onto the London connection. Still waiting for the final one!

Nonetheless, Delta exceeded my expectations (partly cause I expected them to be crap - as US airlines are meant to be!) - definitely a solid Economy class product - it's no Emitrates or Singapore Airlines (which we're used to travelling when to Singapore) but they get you there pretty comfortably, fed, rested and with in-flight entertainment on international routes 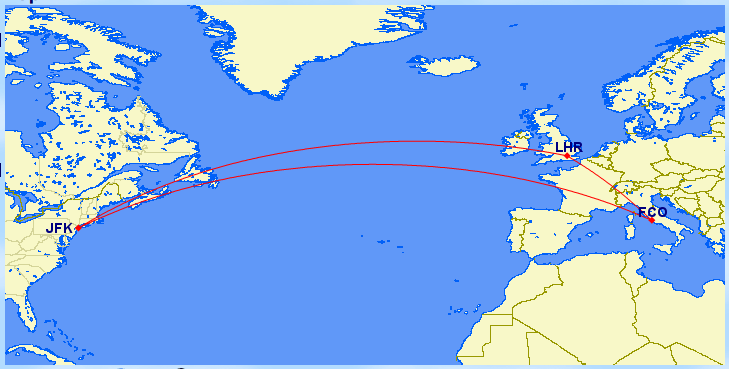 What kind of a frequent flyer wannabe are you? That's an extra 826 miles you've earned with that itinerary. Some people go out of their way to do that!

Comments on the A380? Roomier, quieter and generally a nicer ambience than that of the 777.

- but it worked out rather well since 2 of my mates are also flying from Birmingham on that flight, and I'll be joining them for until Dubai

My latest trip across the Atlantic:

Trip: ZRH - ORD (Zurich - Chicago)
Airline: Swiss International Airlines
Flight No: LX8
Date: 17th August 2010
Aircraft: Airbus A330-300
Seat: 4A (first row of Business)
Comments: An absolutely delightful flight to the US. Brand new plane, and my seat was incredibly spacious (I believe it is nicknamed "the throne", since that's kind of what it looks like). Sat in the little two-row "mini-cabin" just behind First Class. Very good service, plenty of drinks imbibed, nice food, good entertainment (woo Bill Bailey - alas, not in person, though), and overall a very nice experience. Alas, not something I can ever really afford to actually pay for with cold hard cash, so I'll just have to keep saving those miles!

Trip: ORD - MSP (Chicago - Minneapolis/St Paul)
Airline: United Airlines
Flight No: UA687
Date: 17th August 2010
Aircraft: Airbus A320
Seat: 6F (first row of Economy Plus)
Comments: By this point, I was rather grouchy and tired, after immigration in Chicago took an hour, security took another half an hour, and so on. Anyway, the flight got me there - although not my bags. They'd been conveniently left in Chicago. Hmph. Those were delivered the next day.
Owen Rudge
owenrudge.net | Owen's Transport Tycoon Station | Owen's Locomotion Depot | The Transport Tycoon Wiki
Top

I really don't understand how plane ticketing works. Whilst I understand yield management, this situation is preposterous:

All Nippon Airways and Virgin Atlantic both fly from London Heathrow to Tokyo Narita Airport, and they codeshare on each others' flights. In fact, if you book through the Virgin Atlantic website, each flight is the same price, no matter who is flying the plane (about £630 for when I looked). However, on the ANA website, their lowest fare is £777 according to their special promotion, and when I entered in the exact same dates, the fare comes to over £2,000!

Secondly, regarding one-way tickets. Originally I was going to book a one-way ticket to Japan, which is ridiculously difficult to find. Through opodo, Alitalia offer the cheapest one-way ticket to Osaka Kansai, yet on their website they will only sell a Business class single, not an economy one. Most other airlines will sell singles which are at the price of a return, or more expensive (which I can understand... sortof!)
Any opinions expressed are purely mine and not that of any employer, past or present.
Top

Flag carriers offer cheaper tickets to those in other countries. i.e. If you want to book a BA flight between LHR and NYC they will offer cheaper prices if they think you are in the US (rather then in the UK).

Likewise, for frequent traveller programs, the mileage boundaries are lower if you live in a different country to the airlines base (so for example if Lufthansa thinks you live in Japan, rather then Germany, it is much easier to get gold status...)
John Mitchell
http://www.johnmit.net
Top

Of course things can also get confusing when an airline is not just an airline, but also a branch of the government. Emirates Airline is owned by the government of Dubai, and is doing a great job of promoting tourism in the Emirate (after all, everyone upon landing in Dubai is force-shown a Dubai tourism advert), and then everyone transits in an absolutely lovely and gleaming airport. The costs of such advertising can be offset by the government.

It is worth pointing out though that Emirates pay the same landing fees as everyone else at Dubai though.
Any opinions expressed are purely mine and not that of any employer, past or present.
Top

The oft-quoted mantra on FlyerTalk is basically: don't try to understand airline ticket pricing, it actually makes no sense. And that's coming from the Internet's most experienced frequent flyers.

I flew quite a bit in my short 15 year life. But I can't remember the dates and stuff of my last flight. Anyway I just want to say that I love the 717 and the A330, MD-80's are noisy, the 747's flexible wings in turbulence for some reason freak me out, the KLM Fokker 70-100 interiors are getting pretty old, Air France's cabin crew is most often rude, JFK is a pain in the ass and Eurofly is one of the worst airlines ever.

The oft-quoted mantra on FlyerTalk is basically: don't try to understand airline ticket pricing, it actually makes no sense. And that's coming from the Internet's most experienced frequent flyers.

Quote from 'The Flying Book' by David Blatner':

(From a piece by Dave Barry originally published in the Miami Herald, June 12, 1998)

Q. Airline fares are very confusing. How, exactly, does the airline determine the price of my ticket?

A. Many cost factors are involved in flying an airplane from Point A to Point B, including distance, passanger load, whether each pilot will get his own pilot hat or they're going to share, and whether Point B has a runway.


Q. So the airlines use these cost factors to calculate a rational price for my ticket?

A. No. That is determined by Rudy the Fare Chicken, who decides the price of each ticket individually by pecking on a computer keyboard sprinkled with corn. If an airline agent tells you that they're having "computer problems", this means that Rudy is sick, and technicians are trying to activate the backup system, Conrad the Fare Hamster.
Screenshots