Screenshots of your games! All Transport Tycoon games acceptable (including TTDPatch and OpenTTD).
Post Reply
12 posts • Page 1 of 1

So, I've decided to start uploading screenshots when I take ones I like. Maybe I'll be able to keep this save going for long, or my attention span will make me drop it. But until then, screenshots!

I'm focused primarily on getting things to look nice, and have as such given myself lots of money, because I enjoy playing with trains,

Trainsets are:
- Iron Horse 2 (Main Trainset, it's really good)
- Dutch Trainset 2 (Might use some intercities and express trains from here, but I'm primarily focusing on Iron Horse)
- Vactrains 0.2.2 (Because I like the Generic Vactrains for the Future)
- DBSet XL (Again for express trains because fancy liveries)

Industry-wise I'm using ECS and the Lumber Camp sets. For buildings I use the UK Town Set, Town & Industry Houses, and Swedish Houses. I'm using NuTracks for tracks, but I also have Planning Tracks & Track Beds. I technically also have Pikka's Finescale Tracks, but they're enabled purely for the signals. I like the smaller signals it gives, and unfortunately I have no idea if there's a GRF out there that adds just the signals, because sometimes combining tracktypes gets a bit weird.

Oh, and to get my Locomotives to be in the shade of black that they are, I'm using the Mauve-to-Black GRF I found somewhere on here.

Anyway, here are some opening shots, in no particular order!

First Shot! I like this one because I think it shows off pretty well how busy my railway is. I started with Wood Transport, but now also focus on Food, Oil, Fruit, Goods, and a few others.

Second Shot, showing my mess of a junction a bit further down the line!

Third Shot, this time a bit zoomed in, showing one of my three locomotives that is not 0-6-0 Gwyt. Of my 32 trains, 29 are of the Gwyt type that I employ for my Cargo Routes. The remaining 3 are 4-2-2 Spinner locomotives for what little passenger transport I have.

Nice screenshots. Could I include some here?

Of course! I'd be honoured to have my screenshots on there.
Hi~
Top

Thanks, I've added this one. download/file.php?id=209088 It will show up on the OpenTTD website in a few days / weeks hopefully

Started a new game! Mainly because I struggle to keep games going for extended periods of time...

This time, we'll be taking a look at the Birmingham Valley Transport Company, or BVTC. Established in 1870, it's named after the fact that it's starting town (Birmingham) lies in a bit of a valley. It operates two lines so far, one from Birmingham to Rhosneigr, following the Birmingham River.

Double-posting is allowed on your own thread, right...?

Well, anyway, been making a bit of progress!

First up, I expanded by connecting two of the largest cities in the area! Specifically, Latimer and West Nottingham. I also added a side-route to bypass my cramped mainline around Birmingham, and funded some industry to produce food for my main cities. 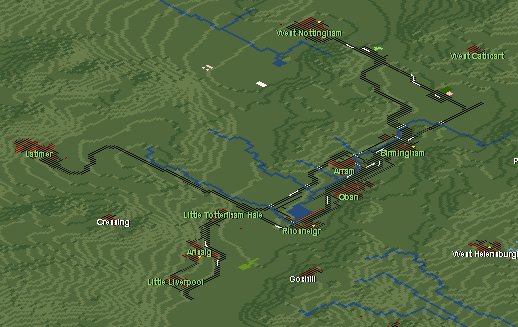 (Is this how I'm supposed to make images appear as actual images? By uploading them elsewhere?) 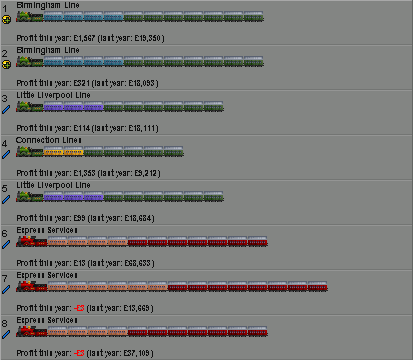 (Oh, this one does show up when uploaded as an attachment. Is it related to file size?)

And finally, a shot of some trains at work on my mainline. I added sidings so my food-delivery trains can reverse.

That mainline between Birmingham and Oban certainly looks like it's going to be fun to upgrade in future!

As for making attachments appear "inline", the file size needs to be less than 800x600px if my memory serves me correctly. The other way, as you've already found is hosting the image elsewhere and using the [img] tags.
POTM August 2012 Joint Winner
My Screenshot Thread
Top

the rules and details for screenshots are mentioned in the sticky at the top of the forum.
Creator of the Openttd Challenge Spinoff, Town Demand patch
After action reports: The path to riches, A dream of skyscrapers
Top

Pilot wrote: ↑
13 May 2020 08:54
That mainline between Birmingham and Oban certainly looks like it's going to be fun to upgrade in future!

Yep... and things are only going to get more and more crowded. So far things are mostly running smoothly, but it's only 1881 by now, so not a lot of traffic yet.


Pilot wrote: ↑
13 May 2020 08:54
As for making attachments appear "inline", the file size needs to be less than 800x600px if my memory serves me correctly. The other way, as you've already found is hosting the image elsewhere and using the [img] tags.

Yeah, I saw that, but I couldn't find a section regarding double posts there...

By now, the year is 1880. I've funded some industry, towns have grown a bit... so future expansion of the mainline is going to get more and more crowded. Fortunately, I've already built a line to bypass the crowded mainline so future services can bypass the majority of the network. I might also have to make a secondary Birmingham station to accomodate more trains sometime soon...


Just beyond Rhosneigr lie a bunch of junctions that have given me a headache from time to time, but I've reworked them to jam less often. I'm really fearing how much of a mess this can become in the future.


But all that future stuff is something for future me to be worried about! Right now, I'm focusing on trying to climb down a hill, since I just learned that Birmingham Valley isn't actually the lowest point in the area! I seek to link up the city of March, and I fear that a straight line won't really work well for trains, not in 1880, at least, and especially not cargo trains! So, I'm gonna have to figure out how to take the long way down...

as far as I know, in your own screenshot thread you can post as often as you want.

If not, I'm in big trouble

Creator of the Openttd Challenge Spinoff, Town Demand patch
After action reports: The path to riches, A dream of skyscrapers
Top

Some developments have been made so far!

Clerestory coaches have been introduced, so I've been quick to phase out most of the 6-wheel coaches. Right now only one train still uses them, though I might replace it's carriages soon as well. Unfortunately, there's no depot nearby, and I'm lazy, and the train is never full, so for now, it gets to keep it's 6-wheel coaches.
Furthermore, the descent down towards March has been completed, only for me to realize afterwards that it wasn't a city, just a big town. Oops.

Birmingham has received a bit of a rework, though it's only partially complete. I made room for a bigger station, though I have yet to decide whether to make it part of Birmingham CS, or to make it a seperate station. Decisions decisions... also some new Clerestory coaches visible in this image!


And finally, a shot of the descent into March, currently very sparsely serviced by only two locomotives...