Screenshots of your games! All Transport Tycoon games acceptable (including TTDPatch and OpenTTD).
Post Reply
97 posts

I've been meaning to share screenshots here since forever of our games, but just could never quite get round to it till today! We usually play games with a set country theme, the current one being USSR/Russian themed to start off with. I might dig up the best shots in my archive at some point in the future to keep the thread going as well. Most of the images have scenes by various other players as well and I will try to credit them when I can but for the most part it's a collective effort and hopefully they'll post stuff here too, who knows!
In the current game we've got Romazoon, Jake, Giles, Oliy, DeltaNorth and myself.


I'll start of with my favourite place on the map; Gdov city. Railway facilities are under Southern Transportation Bureau's (myself) management, which also operates trams and local buses for the city. The ports are run by Central Co-Prosperity Sphere (Giles) that also operate a few buses to nearby villages. Thanks to the Central Co-Prosperity Sphere, enough tuna is canned each day to serve the region and beyond - it's no wonder the city reeks when a good sea breeze blows through. The goods yard can also process minerals; a small TGM3 diesel shunter shuttles loads down from an industrial branch nearby.

Coal reserves are not scarce in the region and Southern Transportation Bureau's efforts to extract as much coal with as little effort really shows in the landscape round the mines. Usman is the biggest mine in the region, rumoured to have a 24/7 workforce and hints of Iron Ore among an excess of coal. The lucrative nature of moving coal and lots of it at once meant that the lines connecting the mines were electrified, Southern Transportation Bureau choosing the 25 kV AC system. Communities such as Meleuz receive the rare treat of electric train services, though given the size of such isolated places it might as well be overcompensation for a reduction in the population's lifespan. Most stopping services from the city either terminate at Meleuz or make use of the headshunt to continue northbound to Sovetskaja.

Usman_LabourCamp.png
(1.09 MiB) Not downloaded yet

Meleuz_Mining.png
(1.08 MiB) Not downloaded yet

Absolutely gorgeous, I love the coal mines! Haven't seen that before.

I also really like these screenshots. Nice to see that you're using in the game xUSSR Railway set. Well done

. Waiting for for new screenshots or even better video of the game. The second option will be much better

Thanks for all your kind comments

. We'll have plenty more to share soon enough! Just to keep this ticking over, I was talking to Romazoon who was missing his castles from previous games... So, I present two of Romazoon's finest châteaux and the small city of Esskov, notable for its major out-of-town TGV station. Enjoy!

RomazoonsSwissCastles1.png
(482.39 KiB) Not downloaded yet

RomazoonsSwissCastles2.png
(881.58 KiB) Not downloaded yet

EsskovTGV.png
(1.23 MiB) Not downloaded yet

Thanks Tin, I love those casttle tiles ! Thank you Quast for making those possible !

Here are some more screenshots, of our running game.

The Railing Dutchman, 27_10_1988.png
A Huge Harbor fully functional, with three different docks for ships, two different platforms for trains, two different loading bay for trucks. many eyecandy ship and some working ships. It also feature some narrow gauge train inside the harbor. Hope you enjoy as much as i did building it :)
(9.45 MiB) Not downloaded yet

The Railing Dutchman, 07_11_1988.png
same as before, but with smaller resolution, you can zoom less, but it should load faster.
(1.77 MiB) Not downloaded yet

The Railing Dutchman, 08_11_1988.png
A busy refinery served by a dedicated harbor and freight station. This is a work made by Giles (mostly)
(1.66 MiB) Not downloaded yet

Three more for the one actually enjoying it

The Railing Dutchman, 09_11_1988.png
A busy freight station where my company produce most of its supplies.
(2.26 MiB) Not downloaded yet

The Railing Dutchman, 14_11_1988.png
Tin's cute little transfer harbor for Oil in the river mouth, the second harbor is for supplies as gasoline is delivered there (this is cooperative work, me and Tin)
(1.42 MiB) Not downloaded yet

Great shots. I especially like the use of narrow gauge inside the ports.
Soccer Mad Boffins
Watch my YouTube Channel
Top

As a good follow-up from the previous screenshot showcasing the modern business district, port and airport of Bestezwaag - I thought I'd mention the 1990 S-Bahn development plan! See if you can find the stops in that screenshot...

Bestezwaag and Hellsnisse being two large cities within close proximity are served by a multi-track mainline, which by 1990 had reached capacity. With both cities expanding outward and many towns between both cities of prosperity, it was decided that the motorway and mainline services were not enough. It was agreed to develop a comprehensive new S-Bahn system using dedicated new infrastructure where possible (S3 being the only one to use existing lines) to enhance the connectivity of the two cities. By 2010 S-Bahn Hellszwaag completed the core objectives of the main plan and released the following network map following the full-line launch of S2. The map also shows the recently upgraded 'Bestzijl and Peninsular' local services, an independent project to S-Bahn Hellszwaag going out further west of the two cities. 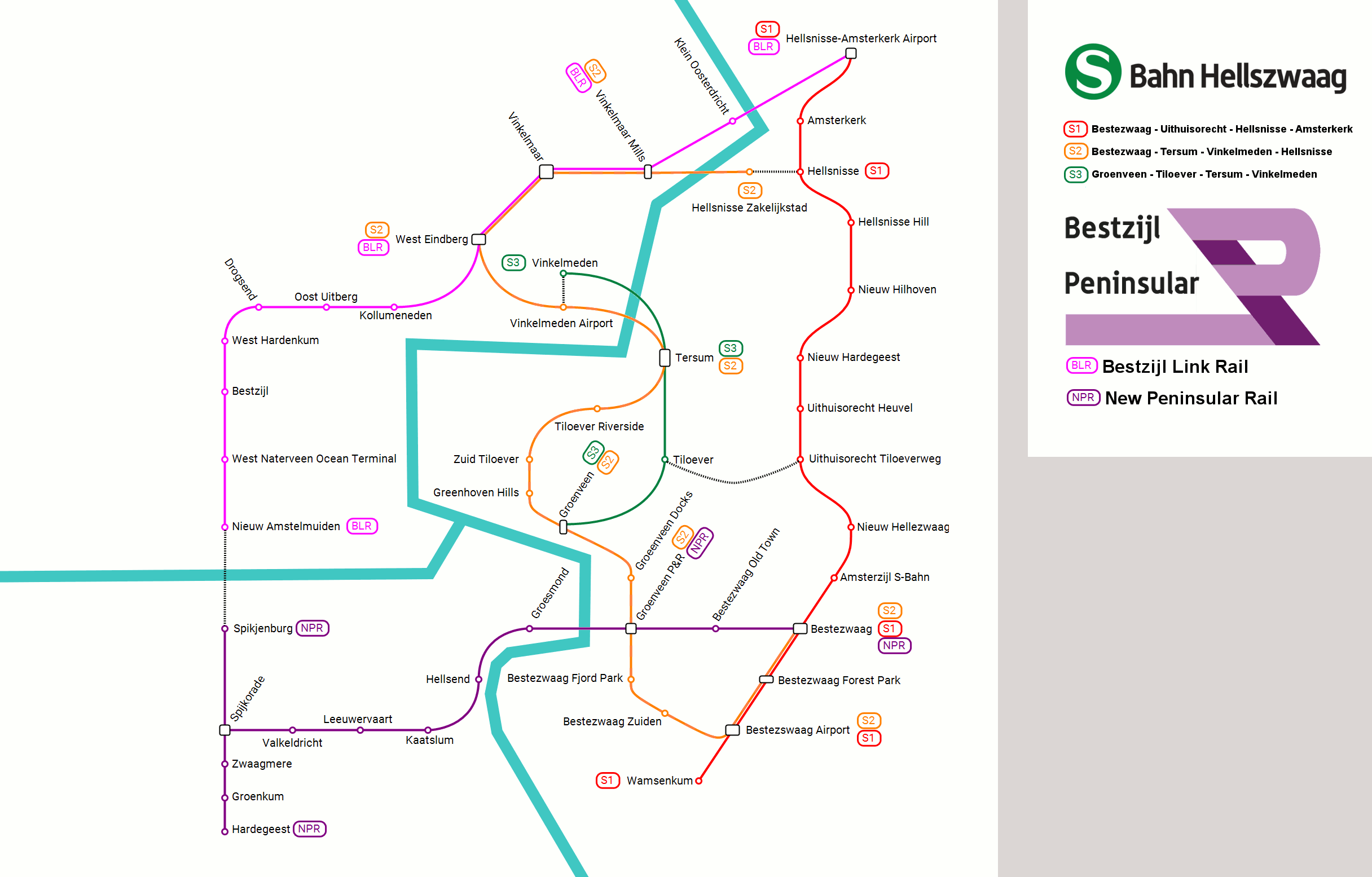 following that nice map here are some screenshot of the same area of that S-bahn map, not sure if tin's map is updated to those fresh screenies taken straight from today.

I'm not going to play on this server. The reason is too large the brakes in terms of performance. It's pretty difficult to build the railway network in such conditions. Maybe my computer is unable to cope with the workload. This is quite possible. In any case, I from time to time I'll just go to the server as guest to see everything that is already built on the map

I'm a regular on Tin's servers and an extremely long time lurker here on the forums. Iv'e been promising Roma and Tin for weeks that I'll get round to posting some screens of my own and I felt it would be nice to highlight some of the more rural areas of the map in contrast to what Tin and Roma have posted below.

Our current game is three weeks old as of yesterday and, naturally, much of the map is now developed. The north-western coastal cities of Hellsnisse, Bestezwaag and Dokoever hold the majority of the world population but the further south and east of these cities one travels the urban environment quickly transitions to a rural landscape dotted with small towns and villages.

1.) The Uitdorp Valley is isolated from the rest of the map by a ring of hills and mountains. This region was one of the first areas of operations for the Mid Coastal Railway but has remained mainly unchanged from the 1940s as a result of its isolation. Here we find one of many orchards and a sheep fold situated in the foothills of Oostervorst Mountain. 2801 2005 has just returned to load the latest harvest of apples, which will eventually be used to make cider courtesy of the Bobenburg Co, whilst trucks wait for the new year and a new shipment of lamb. The canal the far south is one of the oldest still in service with canal boats taking agricultural goods up the orchards from a port at the mouth of the Uitdorp river and foot of the valley.

2.) A good example of the undeveloped nature of much of the country. The station in Kollumelmuiden was opened as recently as 2015 as part of a critical new link between the distant town of Eerrade and Klein Eindhalen. This new link shaves off hours between these two destinations, which previously required trains to travel via Mid Coastal's southern mainline, and opens up new opportunities for industry in this region. Critics of this project have raised valid concerns about the effect that this will have on the picturesque landscape and have highlighted the co-incidental discovery of significant oil deposits in the region. Locals are keen to maintain the character of the area, but, with the government backing further investment in the region it is likely that further change is to come.

3.) The rural economy in action ! Uithuisellum is one of the larger logging camps situated to the south of Klein Eindhalen, with 651 1001 and 651 1002 making near monthly trips to the major yard at Noord Driemeer in exchange for fertilisers and logging equipment. This facility follows the model for rural industry that the government promotes with workers living on site and subsidies being paid to develop education and healthcare facilities in the town. It is hoped that this will help promote sustainable development and prevent a loss of rural populations to the cities as was prevalent in the 60s and 70s.

Hope you enjoyed, I'll certainly be back with more sometime

Everything is done tastefully and gently

You still go on here are new screenshots.
I like on this server to watch how others play

This is just cool

We play a new game, Japan theme, here are some screenies from it

We use daylenght x9, Renewed City Growth script, and many newgrf, as well as Infrasharing

Some companies decided to be specialed in freight and have no real network, some other decided to specialise in passengers with a network (this is how some freight company can remain without their own network), there is also companies that do both. Finally Shinkansen network is owned by various companies, each usually run their own trains on their tracks, but it s not a rule, it can happen to share tracks.

Japan Rail Freight, 24_05_2027.png
Toyama was a small city, until Japan Rail Fraight, and Shinsekai Tetsudo decided to make it a central location for their railways.... after 70 years of continuoous development it just became the most important city on the Island, thanks to the Harbor stations allowing lots of delilveries, and to the dense passenger network, wich keep growing with the town
(10.16 MiB) Not downloaded yet

Japan Rail Freight, 26_05_2027.png
Hitachiota, is a mountainous city, that became huge too with the important industrial discrict. It produce lots of Booze, this seems to be a reasonnable cause of a high growth rate XD
(3.68 MiB) Not downloaded yet

Japan Rail Freight, 27_05_2027.png
Those towns were small, very small...until again the two same companies decided to make it a central point of the network. A few industries installed themself there when the railway arrived and helped to achieve a nice town growth.
(3.06 MiB) Not downloaded yet

and here are some mini map screenies so you can have a glimpse of the size of the network of each companies and even te kind of tracks used ; )