Screenshots of your games! All Transport Tycoon games acceptable (including TTDPatch and OpenTTD).
Post Reply
150 posts 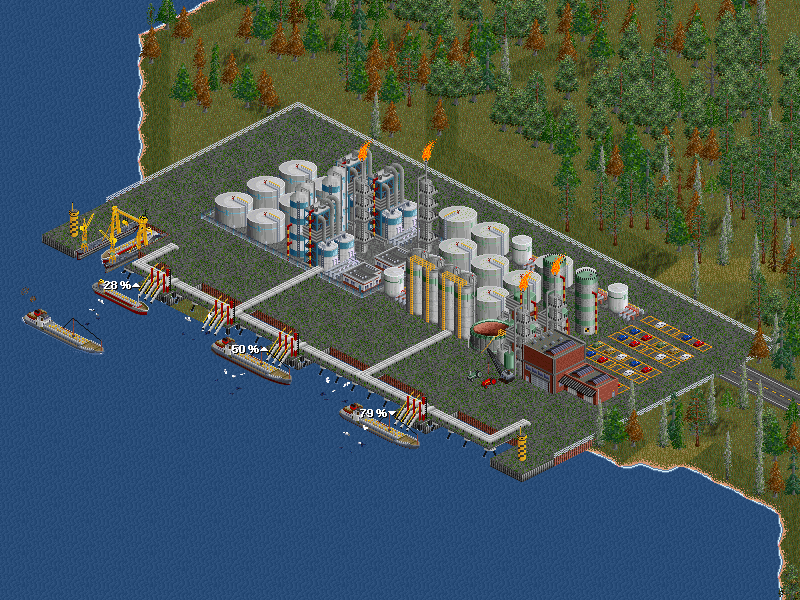 The Honsjø refinery has been upgraded with piping, including dock-overlapping tiles. It looks a lot more like a real oil harbour now.
My screenshots
The 1700-2050 Ships & RVs thread
Norwegian Alternate Town Names
Top

You are using my ISR-style Dock GRF right? To change the appearance of the dock to ISR style tiles?
What parameter have you set? It looks like the parameter that gives two tiles. There is also a parameter setting, that changes one of those tiles into water.
That way the pipeline-dock-overlapping tile appears to be in water. (now its over a ISR-tile)

This off course also changes the appearance of your other docks, but there are also dock-overlapping tiles (that can be placed in water) that have foundations to overlap the watertile to correct the "gap" you get, like this: 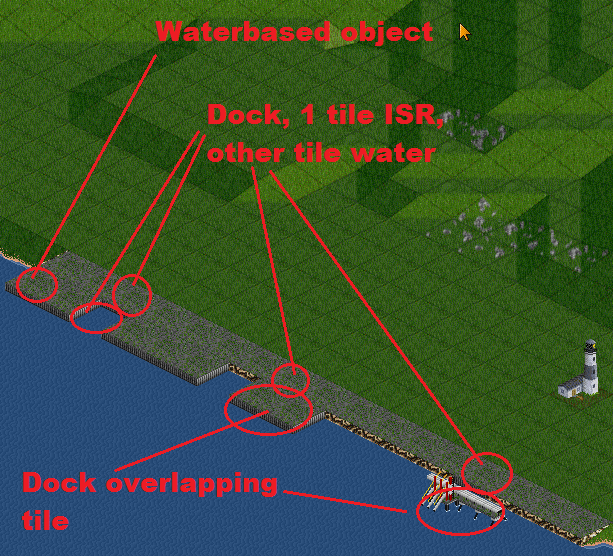 Quast65 wrote:You are using my ISR-style Dock GRF right? To change the appearance of the dock to ISR style tiles?
What parameter have you set? It looks like the parameter that gives two tiles. There is also a parameter setting, that changes one of those tiles into water.
That way the pipeline-dock-overlapping tile appears to be in water. (now its over a ISR-tile)

I've set the parameter 1 to 4, empty tile without rails. I have found that to be the best fit all-round, in particular in the sailship era. I have tried most of the dock variants, but this is the one that has stuck.


Quast65 wrote:And dont forget to let the water fill all the tiles before you place an object

The overlap objects are quite tricky to work with, and I hadn't figured out until now that you have to place it on the tile next to the dock. I'm reworking several harbours now. 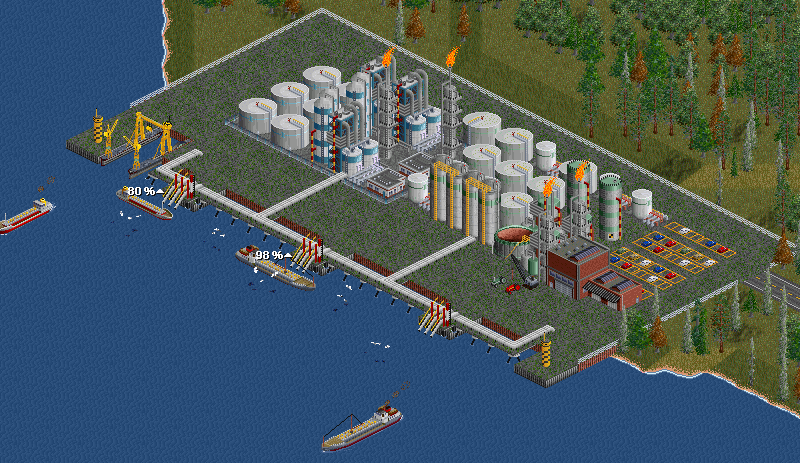 I think that I'm getting the hang of it.
My screenshots
The 1700-2050 Ships & RVs thread
Norwegian Alternate Town Names
Top

I hadn't figured out until now that you have to place it on the tile next to the dock. 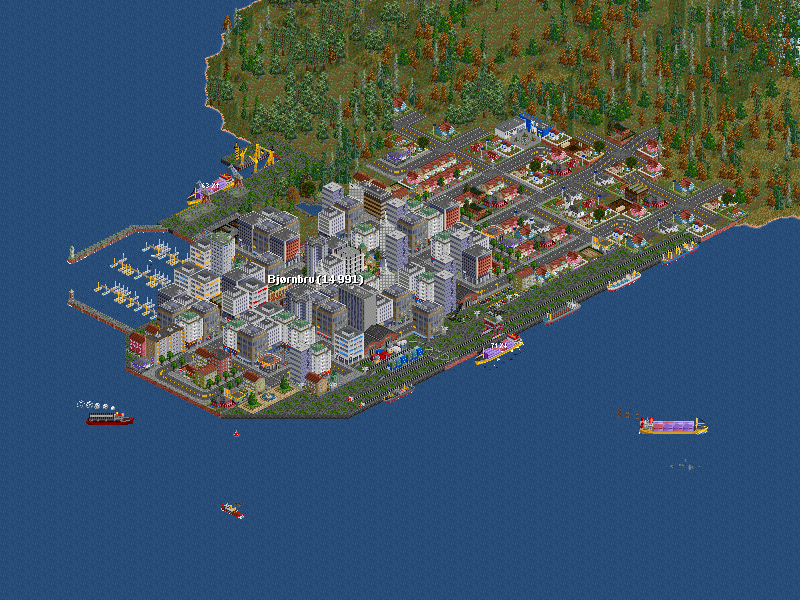 Bjørnbru in 2149. The main east side harbour has recently been extended all along the waterfront. On the west side, a harbour for recyclables has been added, and a leisure boat marina.

A closeup of the same view. 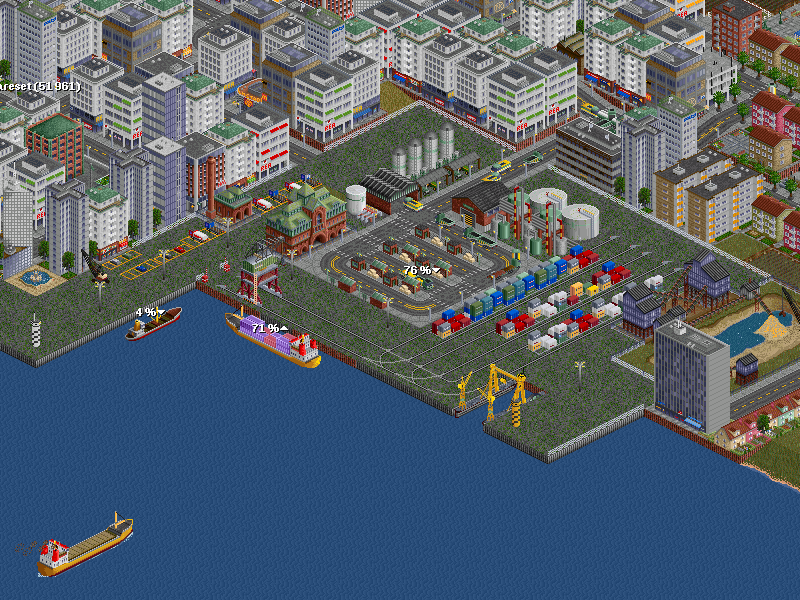 A long-needed expansion of the Hareset brewery harbour. This site has become rather cramped over the years.
My screenshots
The 1700-2050 Ships & RVs thread
Norwegian Alternate Town Names
Top 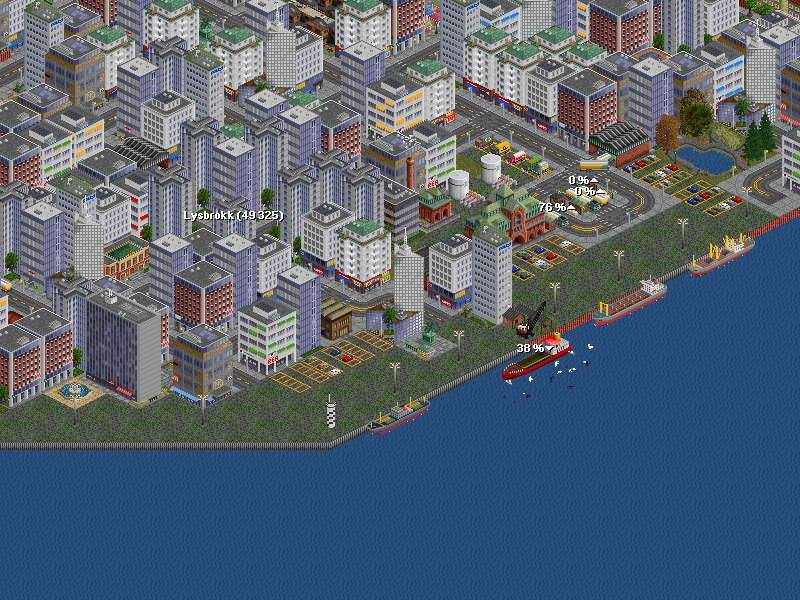 The Lysbrokk brewery now gets manufacturing supplies from the Torstjern recycling plant, and the production has skyrocketed. The 8 integrated tanker trucks have been replaced by 32 long articulated ones.
My screenshots
The 1700-2050 Ships & RVs thread
Norwegian Alternate Town Names
Top 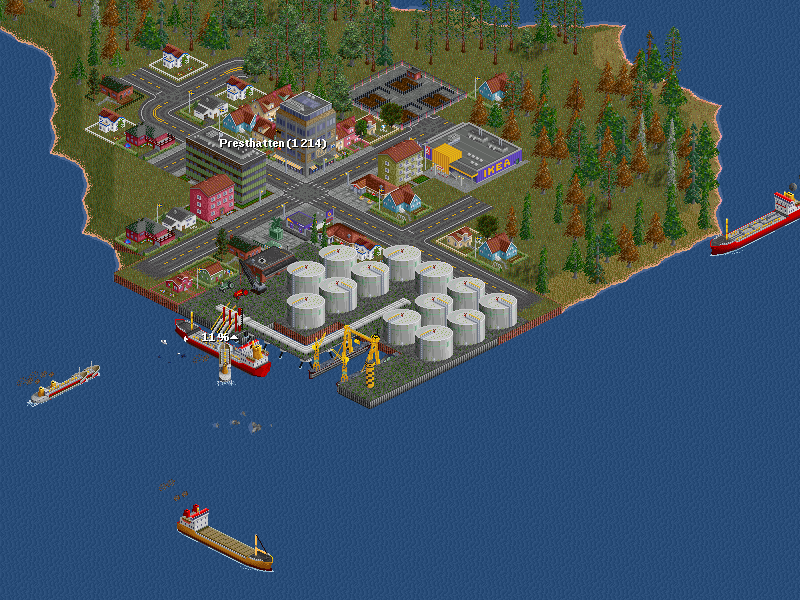 The new oil transit harbour at Presthatten, a simple facility with just one dock. The small tank ships from 8 offshore platforms in the southern ocean transfer their loads here. The oil is then carried to the Honsjø refinery by 7 Yokohamas. 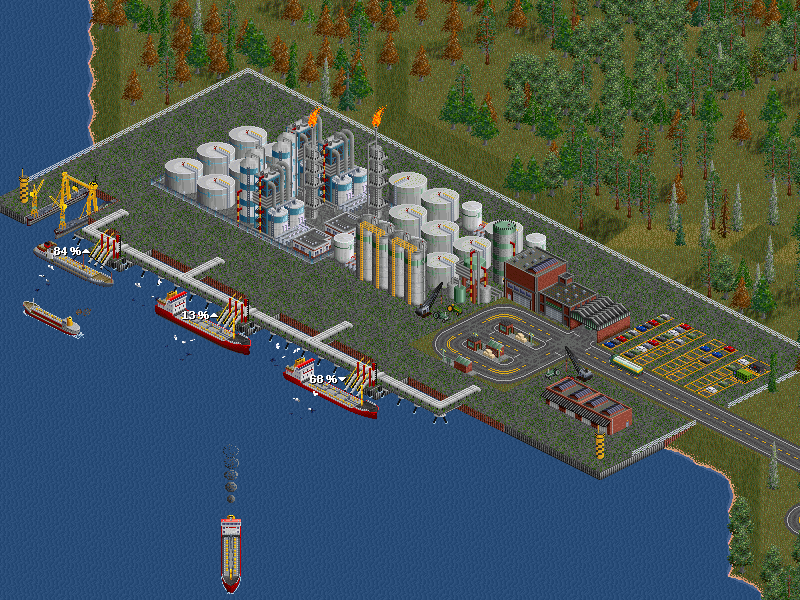 The Honsjø refinery has been expanded with a truck station. There has also been a substantial increase in oil deliveries from the southern offshore platforms, which has prompted the upgrade of the chemical tankers from Eddystones to Hopetowns, and the gasoline tankers from Hopetowns to Yokohamas. The key factor in the latter upgrade is of course that the refinery must be able to provide a shipment at least every third month, in order to keep the Stakskog bulk terminal going gung-ho all the time. 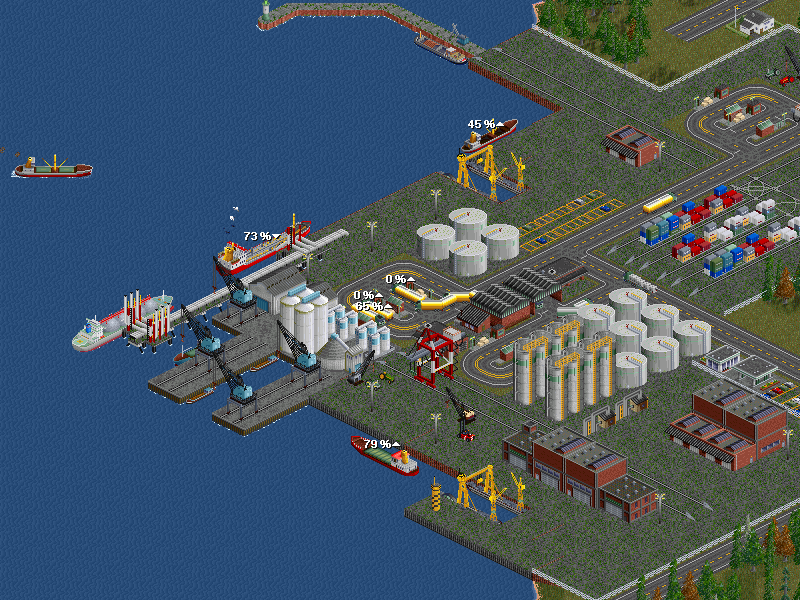 One of the Honsjø gasoline tankers is unloading at the Stakskog bulk terminal. A new Marico LNG ship can be seen at the harbour too.
My screenshots
The 1700-2050 Ships & RVs thread
Norwegian Alternate Town Names
Top 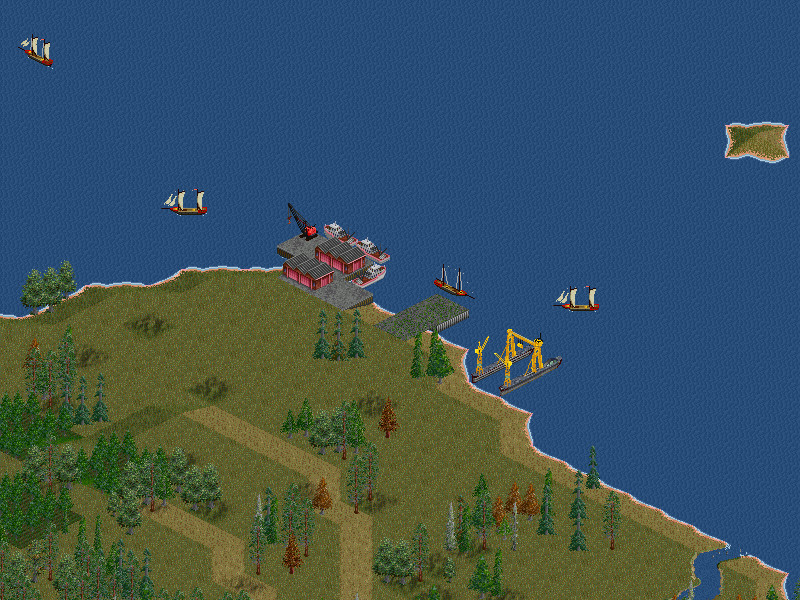 New game, the previous one was getting rather old. This is the Ranglesund Transport Company's first venture in 1803, two years after its inauguration. 22 schooners serve 3 fishing banks. The company is heavily indebted, but the economy is sound. The installation is still just the bare necessities; a dock and a depot, and no adornments. That will have to wait until the money starts rolling.
My screenshots
The 1700-2050 Ships & RVs thread
Norwegian Alternate Town Names
Top

Looking at all your shipping screenshots, I realize what's missing. Instead of having seagulls as objects, we need tugboats as objects for the ships to sit between, so it looks like the tugboats are helping to keep the ship pushed against the jettys!
Do you like drones, quadcopters & flying toys? Check out Drone Strike Force!

Sure, some tugboat objects would be nice. There are also some Marico lights under "Moles" which could be used as ship guidings. Personally, I like the seagulls 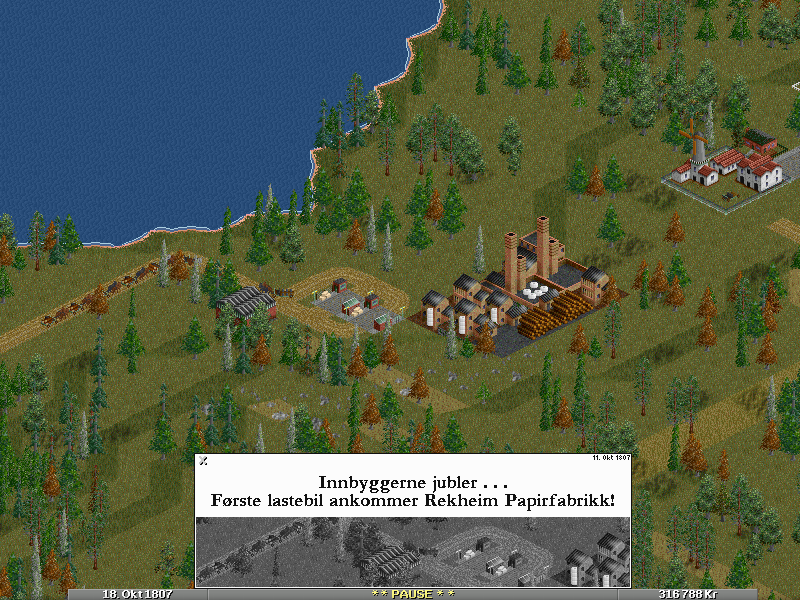 As industries are closing all over the place for lack of deliveries, a paper mill has been secured for the company. It's located at a nice distance from the fishing harbour, which it will supply with cardboard. The forest has a base production of 99 tons per month, about the limit of what the horse carts can comfortably handle. 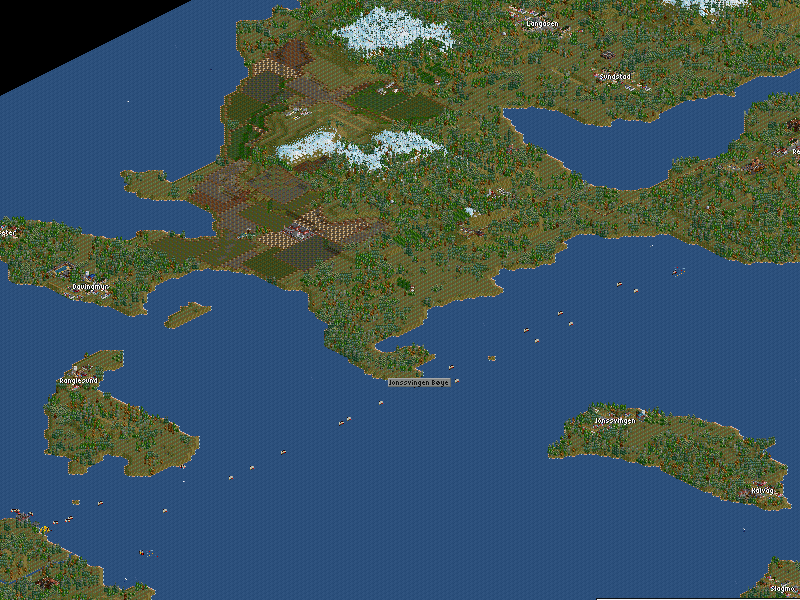 An overview with the fishing harbour in the lower left, and the paper mill in the upper right. The isthmus with the timber road will be penetrated by a canal for the cardboard ships. The picture also shows the company's fourth fishing ground, yielding 140 tons per month. It employs 22 fishing schooners, effectively doubling the company's fishing fleet.
My screenshots
The 1700-2050 Ships & RVs thread
Norwegian Alternate Town Names
Top

I think the blank water tile object works. It's just difficult to see where you put it, so I like the seagulls too. 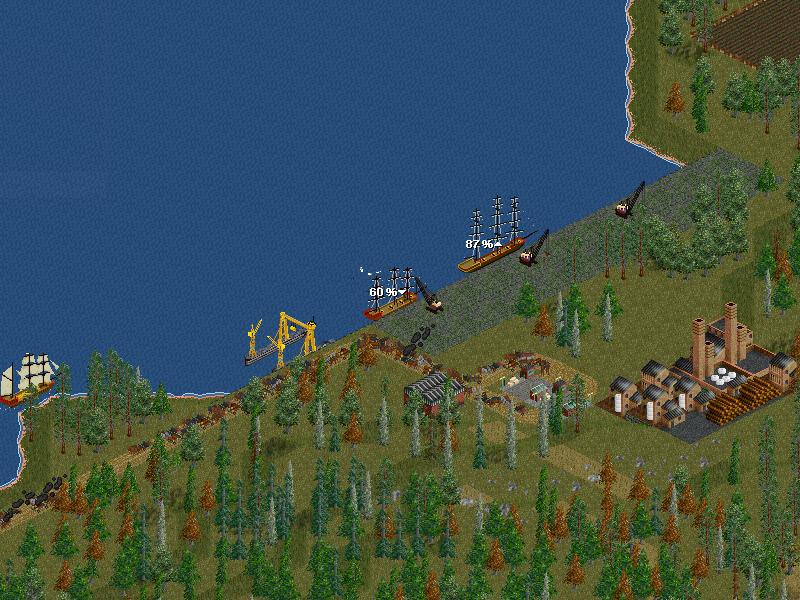 It's 1820, and a harbour with three docks has been constructed for the paper mill. Clay and chemicals are delivered by barques and merchantmen respectively. The brand new Clipper is being deployed for the transport of cardboard to the Ranglesund fishing harbour. 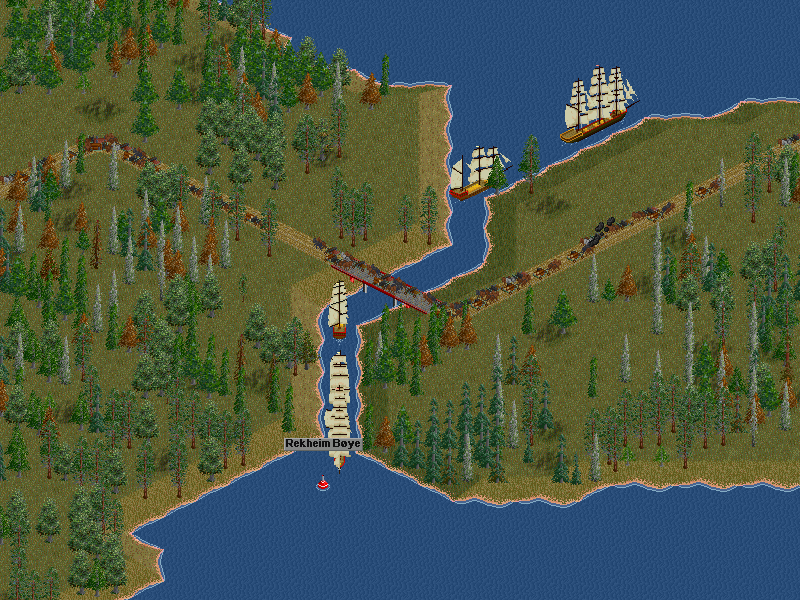 Very beautiful and gorgeous screenshots. I really like your style of building ports. Well done 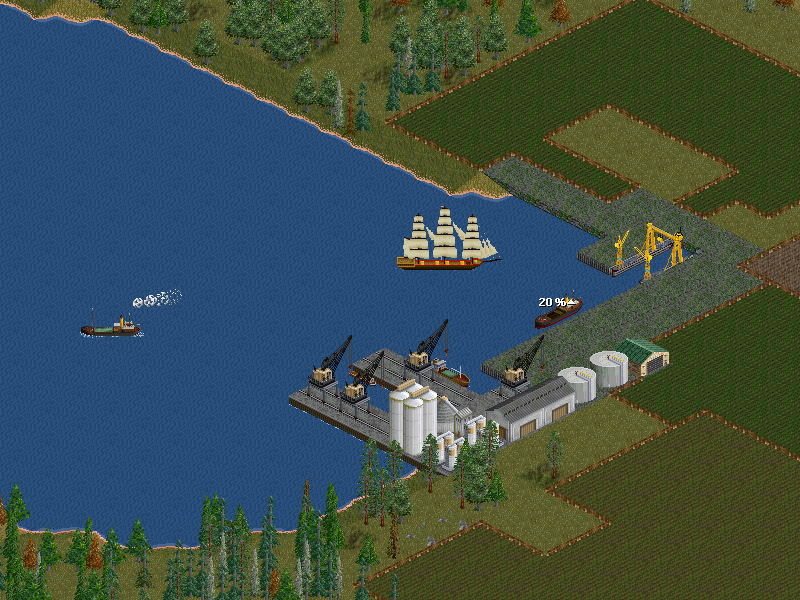 The Moltedokka bulk terminal, which is providing chemicals for the Rekheim paper mill. I'm in the process of replacing the clippers with small steamers.

There are several reasons why I don't like playing with trains. The primary one is that they take up far too much space for my taste. They also tend to require more attention than ships and RVs. I've got a very relaxed playing style, and I've found that ships and RVs suit my temper well.
My screenshots
The 1700-2050 Ships & RVs thread
Norwegian Alternate Town Names
Top

I agree with you about trains. With ships and cars easier and safer as you say. Trains require a lot of attention, otherwise there will be different traffic jams, accidents. I'll try to play with ships and vehicles later in another new game 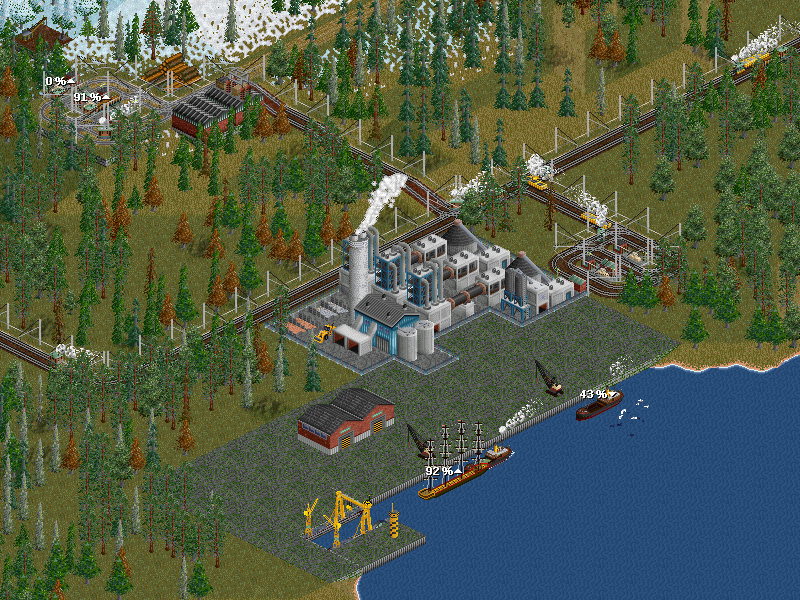 The Rekheim cement plant, just south of the Rekheim canal. It receives stone, coal, and clay by ship, and recently a tram line from a nearby quarry has been opened, sharing part of the tracks with the timber line to the paper mill. The first forest can be seen uphill behind the cement plant, and the old horse road, which has now been partly abandoned. Due to the much larger capacity of the trams over the horses, a second forest a short distance to the west has also been added to the paper mill supplies. 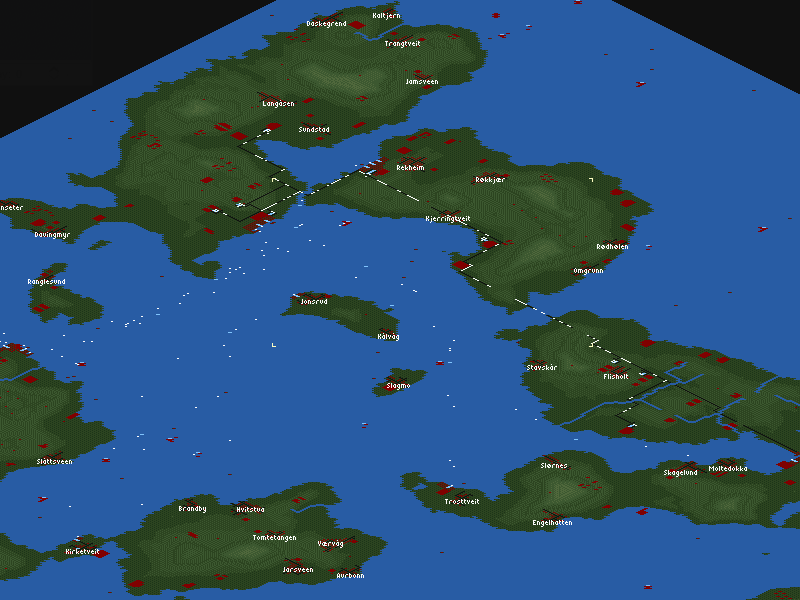 A map showing most of the traffic in 1881. A tram mainline has been constructed between Rekheim and Flisholt, where two forests have been connected to the paper mill. Two clay pits that previously were served by ships, are now served by trams. One is the pit east of Kjerringtveit which is supplying the cement plant. The other one, situated by tje fjord opposite of Slørnes, is supplying the paper mill. Further eastwards the line passes yet another two forests, and will ultimately also provide transport for the chemicals from the Moltedokka bulk terminal at the inner end of the fjord. However, the trams still lack the capacity to go much further than the Slørnes clay pit. 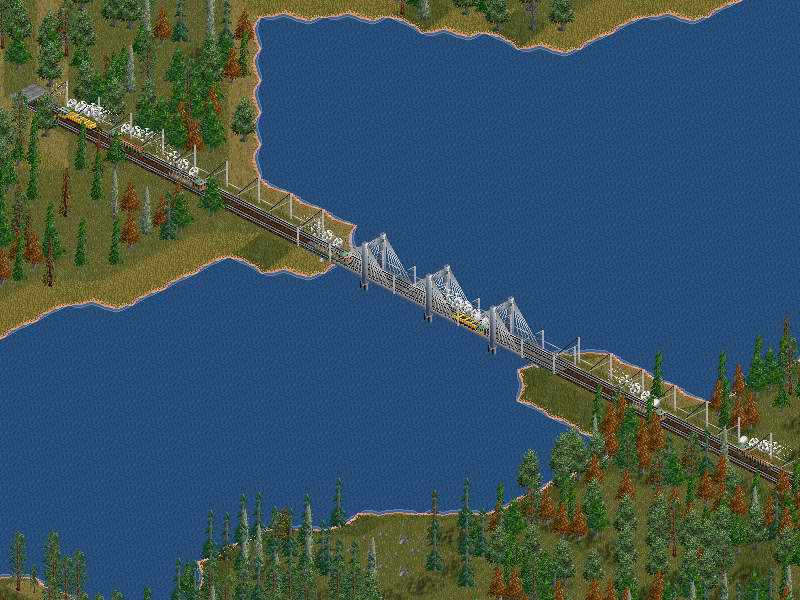 The suspension bridge connecting the two north-eastern mainlands. Spanning 10 tiles, I assume it's about the limit of what might realistically have been constructed at the time. The excavation of tunnels on both sides of the sound provided a lot of landfill to shorten the bridge span.
My screenshots
The 1700-2050 Ships & RVs thread
Norwegian Alternate Town Names
Top 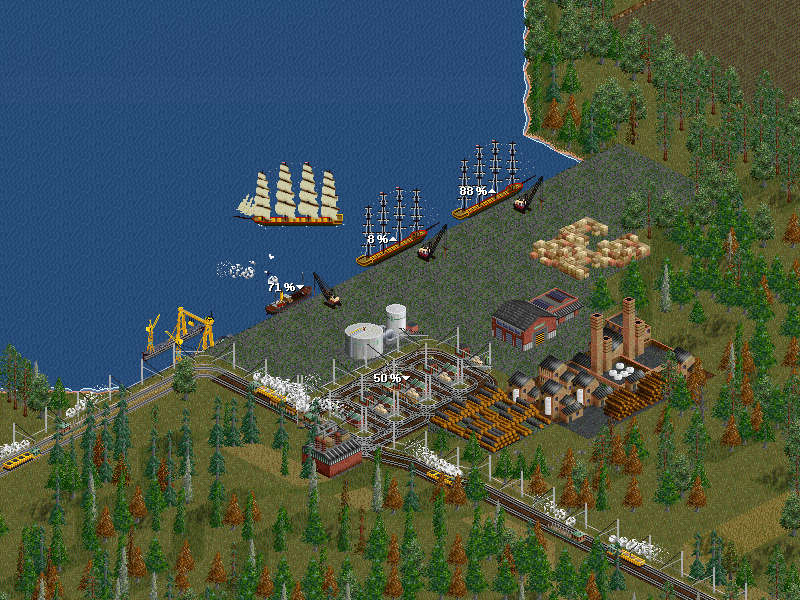 A visit to the Rekheim paper mill. A Cumbrae is delivering a load of chemicals, while wood and clay are delivered by trams. A Windjammer filled with cardboard has just left, destined for the Ranglesund fish market. Another Windjammer is loading paper, destined for the Slåttsveen hardware store.
My screenshots
The 1700-2050 Ships & RVs thread
Norwegian Alternate Town Names
Top

No breweries??!! Some thing is seriously wrong with your economy!!

Lovely shots, by the way!

I promise, there will be breweries 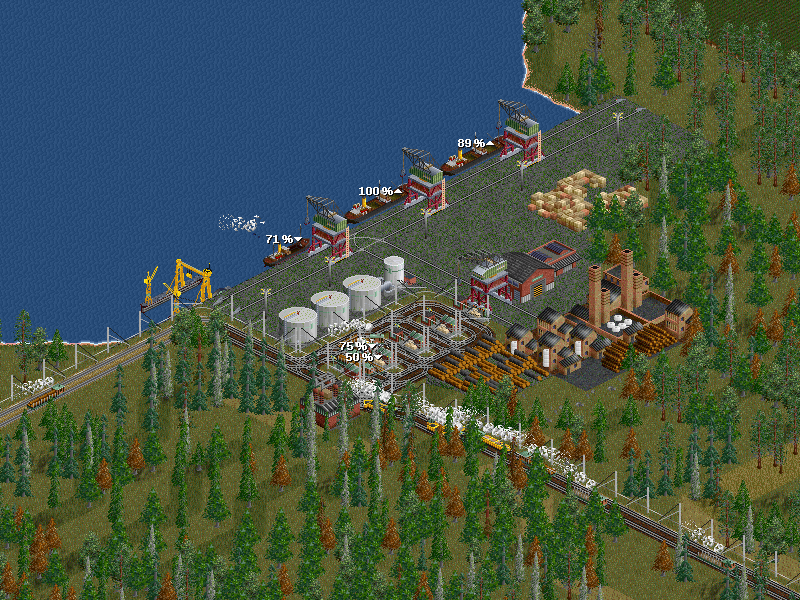 In the meantime, the tall ships are gone, and the paper mill harbour has been refurbished with big cranes and electric light. It may be a bit anachronistic, or at least this ought to be a hyper-modern harbour in 1895. 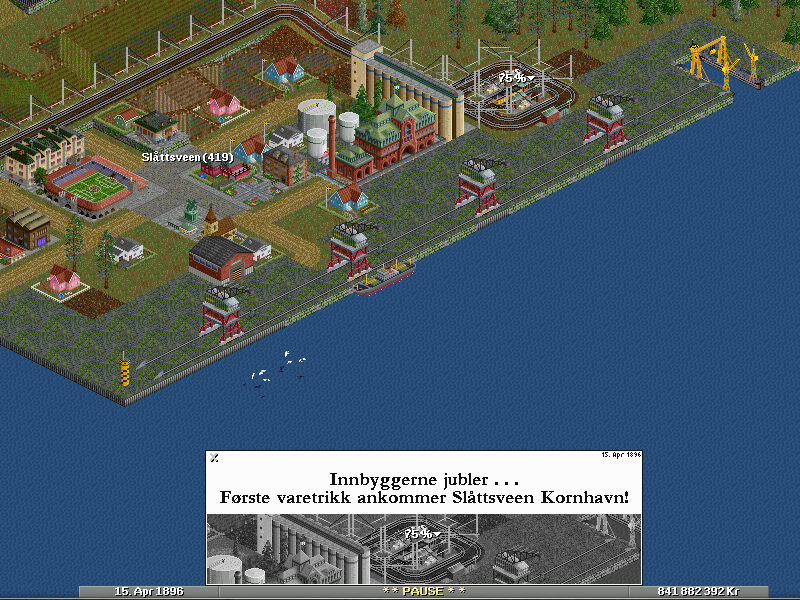 So, like I told you, here's the brewery, financed out of the company's own pockets. There were only two breweries on the map, rather awkwardly placed. (Number of industries is set to Low.)

The company already had a harbour at Slåttsveen and an outstanding reputation with the town authorities; the paper (Goods) from the Rekheim paper mill is going to the hardware shop at the left edge of the picture. There's a fake dock and ship at the second crane and some seagulls to lead the paper ships out of the way of the new brewery docks. The third and the fourth crane are at the docks for outgoing and incoming cargo respectively. A farm producing grain is conveniently situated a short distance west of the town, and the grain is for now brought to the brewery by Amblecote box trams; covered hoppers are promised to be available in a few years.
My screenshots
The 1700-2050 Ships & RVs thread
Norwegian Alternate Town Names
Top

My faith in your economy has been restored!!