Screenshots of your games! All Transport Tycoon games acceptable (including TTDPatch and OpenTTD).
Post Reply
42 posts

What are some of the more complex junctions you have made?

starting the bidding with a 4 way grand union where to the south (bottom left) there is a busy goods line, to the north is a branch off the main line that serves both branch PAX and goods, east leads to one of the main suburban pax stations,
and west leads off towards another busy interuban station with a busy goods yard attached.

again with transparency turned off

I think this might be one. The long recyclables trains waited too long and also jammed other trains, so it ended up looking like this.

I'm fond of this portion of the network. A mainline runs left-to-right through it, which sees express passenger, local passenger, and lumber trains hauling through it. Numerous branch & spur lines service farms, the city at bottom-left, and run northwards to a steel mill.

Supercheese wrote:I'm fond of this portion of the network. A mainline runs left-to-right through it, which sees express passenger, local passenger, and lumber trains hauling through it. Numerous branch & spur lines service farms, the city at bottom-left, and run northwards to a steel mill.

I gotta ask, where is that big airship from? and is that a dirt International Airport?

nettrans33.PNG
The swirly thing near Tinmen Golf, a result of having lots of space on one side and none on the other. Works in all directions.
(413.44 KiB) Downloaded 4 times

nettrans35.PNG
Lines around the outskirts of Neutral Milk. Passenger and freight is intertwined, but mostly separate.
(996.43 KiB) Downloaded 4 times

Emperor Jake wrote:I gotta ask, where is that big airship from? and is that a dirt International Airport?

Ah, that would be the Hindenburg-class; I made a grf out of these sprites but I have no idea what sort of license they are covered by, so I am loath to post the grf publicly.

The dirt International is a personal addition I've made to OGFX+ Airports. It doesn't quite look as good as the other dirt-runway airports, so I haven't added it to the nightly branches.
Eyecandy Road Vehicles | Fake Subways | Supercheese's NewObjects

Complexity of the 5 junctions here stemming more from aspect of size:

Cool system of interchanges. I think that in such a system should be much more trains. Or show more screenshots with a large number of trains. Thanks in advance

Thank you, and yeah, although with my world pop having grown by ¾ million just the past 8 years, the system is built for eventual swarming by trains. As it's been, when platforms to a few stations show little sign of being freed by passengers, I meld a string of new services into my highly-regulated network..at a rate of about 1 dozen/year.

I forgot about this 5-prong junction many tiles away:

Errrr better-looking pronginess to this pair's worth:

This cluster of laced junctions is the clumpiness that stumped me..lots of fiddling..mystifyng threading..no ability at conceptualizing, which felt really queer..&, afterwards, surprised at noticing its altogether being trilevel..oooo + I now see it's 6-prong: 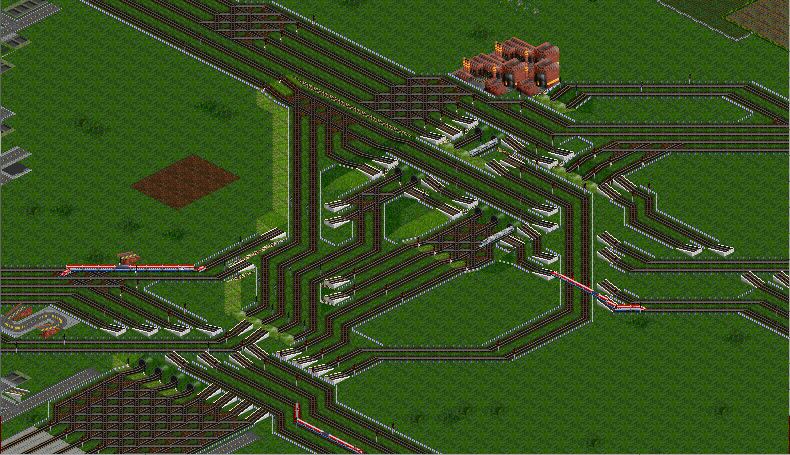 This monster was in my last save game. I'm not sure if the screenshot even shows its final evolution, because S2013PP seems to have committed seppuku over this 40+ MB save game.

3%20Frutigen%20Junction.png
Just south of Frutigen, one of the network's most complicated junctions is located. Six railway lines meet here:
1) to the north: the line we came from (Stans & Lenzburg)
2) to the east: mixed-traffic main line to Pratteln-Frick-Presinge HB via Altwis
3) to the east: high speed railway to Pratteln-Frick-Presinge HB, bypassing Altwis
4) to the south: South West Coast Main Line via Luterbach, Bronschhofen and Zeihen to Leibstadt (with an extension to Vuillerens)
5) to the south: the Luterbach-Bronschhofen freight bypass going through below the main station of Luterbach with non-visible additional steep gradients to avoid colliding with the pedestrian entrance level of the station
6) to the west: to Schönengrund (-Selma / -Genesterio) and to the grain mill, stockyard and bauxite harbor between Frutigen and Chermignon 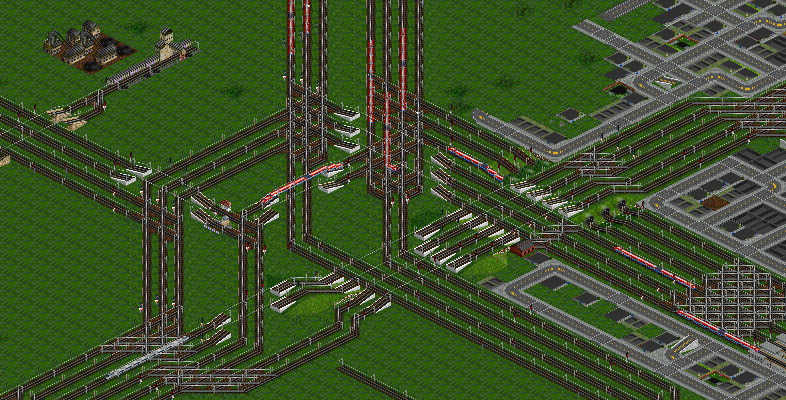 Here's a flat Junction. It's a mess of tracks. I have around 10-15 trains that pass through it. I have no regrets.

A messy junction indeed! But really cool.
Forgive my curiosity, but I wonder which train set you're using, as well as which tram tracks? I don't think I ever saw them before... Are some locos push-pulling?
Some screenshots of mine...
Top

As for the freight trams, they are in the HESQ set.
Something goes here, hell if I know.
Top

Thank you for the quick answer!

I didn't remember this push pull feature in UKRS 3.04, I guess that's because it only works in TTDPatch, right?
Some screenshots of mine...
Top

It works in OTTD, you need a shunter engine, five or less cars, and a brake van.

Here's a complex junction for you.