Never heard of tunnels then DeadFish? At least, that's my guess.

Ah,. that explains - Duh, I must be stupid - mind you I just started playing OpenTTD. Thanks Puggy.
Top

BlasterTransport wrote:ok thanks for the info! I hadn't noticed that plane before in av8. EDIT: Well, I might as well post a screenie of my own
feedback please!

The station looks nice and effective. The two airplanes in the sky are more smoking guns.

Just one thing I can't see where it stands for. The way-point "Dutlet Brundhattan" is at the and of a track, or?
Keep life simple...
Top

Theres a corner piece of track there, its just covered by a section of road thanks to the diagonal crossing patch in the MiniIN.
Top

Here the beatiful city and most expanded at this moment.

My first post of game images: lets see what you think!

plonnleycanton.PNG
Here the former isolated villages of Plonnely and Canton have rapidly grown along the new railway as new jobs and opportunities have been created.
(473.42 KiB) Downloaded 835 times

I think they look nice. The tunnels are a good way of saving space. You're using German instead of British signals though, and the functionality of Ninninghattan Docks can't match its looks. See, if two trains from opposite ends both choose the same platform, one of them will arrive at the station first, and the late train will be stopped at a red two-way exit signal, thus causing a deadlock.

Since Ninninghattan Docks is a three-platform station, you could take a look at http://tt-forums.net/download.php?id=59716 and see how trains from both ends can choose the middle platform without any possibility of a deadlock, and little interference between arriving and departing trains. I think it's the best (but not necessarily good) layout for such a station, until there's a better way for trains to reserve platforms.

EDIT: I've got some screenshots myself now.

We'll start off with the map which, unfortunately, can't fit into a 800x600 screenshot.

Little Hendingstone Transport, 15th Nov 1937.png
As you can see, the towns have grown quite a bit since 1929, as has my transport empire. New additions include a fully electrified line to the east, a mountain line to the west, and lots more vehicles.
(69.55 KiB) Downloaded 797 times

Here's some pics from my current game. a couple of these stations were deadlock nighmares up to recently when I started remodelling them. "north" is top-right.

Exford Transport, 1st Dec 2016.png
this was very bad for deadlocking but it's smooth as slik now. the junction took lots and lots of tweaking to get fast speeds on the &quot;straight through&quot; movements.
(344.38 KiB) Downloaded 656 times

Exford Transport, 24th Jan 2017.png
My biggest station and the original hub of the network. 3 main lines converge here from north, south and east. major remodelling in the 1990s to add platforms and remove deadlock, which meant turning it through 90 degrees.
(369.62 KiB) Downloaded 766 times

Little Hendingstone Transport, 29th Dec 1932.png
Donston is an excellent site for a heavy traffic through station due to flat terrain to its south, so we started off big. This is just a rare 'gathering' of EE1s. Normally, you would only see one or two trains at the station.
(160.27 KiB) Downloaded 543 times

Little Hendingstone Transport, 9th Oct 1932.png
Let's go back a few years first. This is Ronnley Market just after the launch of our new electric train service. RVs and planes were added later to augment the trains.
(190.15 KiB) Downloaded 593 times

All of the screenshots will be from 1937 now. Construction on the mountain line started in 1934/35, but I only had something to show 3 years later.

Also, remember that the pictures are in wrong order.

Little Hendingstone Transport, 22nd Jun 1937.png
This is the intermediate station of our mountain line: Little Hendingstone Valley. Sadly, the station's capacity is reduced by its small number of platforms, and its long tunnels.
(207.15 KiB) Downloaded 408 times 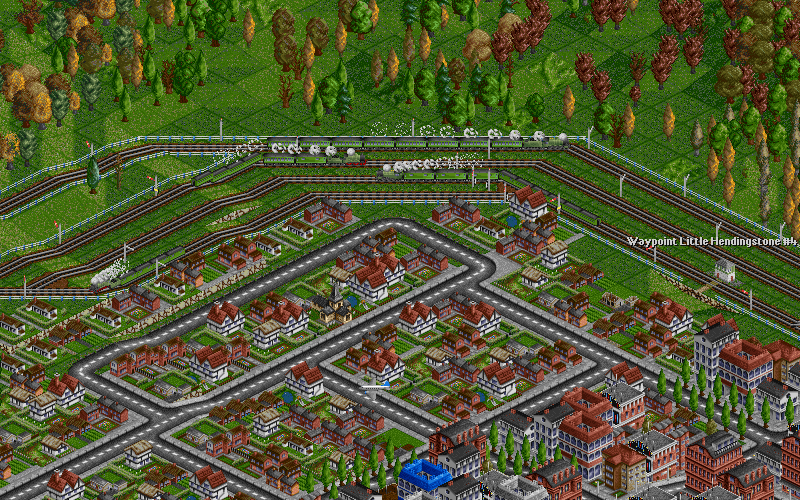 Here's a good view of the new Tank engine and the Standard Five. The outer track is for the faster Pacifics/Standard Fives only, with a nice downwards slope.
Little Hendingstone Transport, 13th Jun 1937.png (107.69 KiB) Viewed 14711 times

Little Hendingstone Transport, 31st Oct 1937.png
Two Streamliners fly past each other as an older 4-6-2 enters the tunnel at a relatively slow speed. Now that we're mixing the fastest with the...not-as-fast, we've had to construct a passing lane to allow the Streamliners to overtake.
(191.86 KiB) Downloaded 388 times 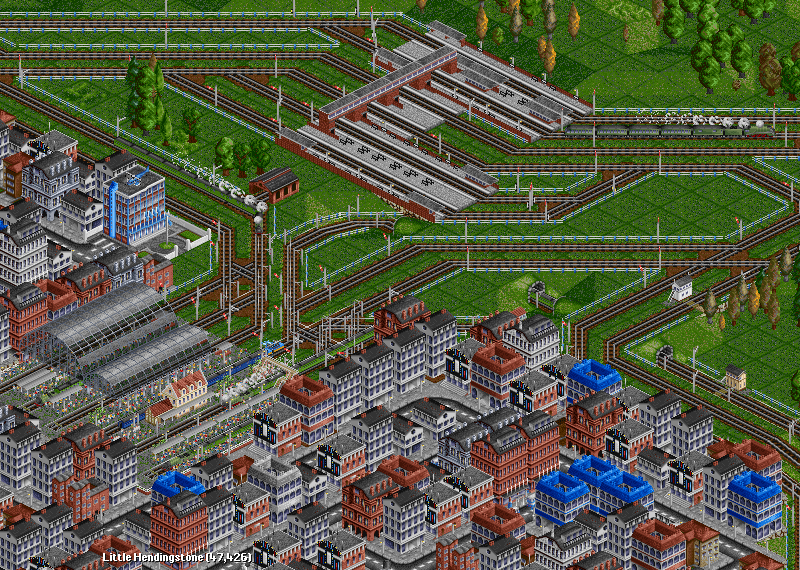 A second generation of Pacifics was made available in 1937: the 4-6-2 Streamliner. It even comes with its own unique beaver-tail observation wagon at the rear. :) This 4-6-2 is seen departing from the new addition platforms of Little Hendingstone.
Little Hendingstone Transport, 31st Aug 1937.png (114.95 KiB) Viewed 14698 times 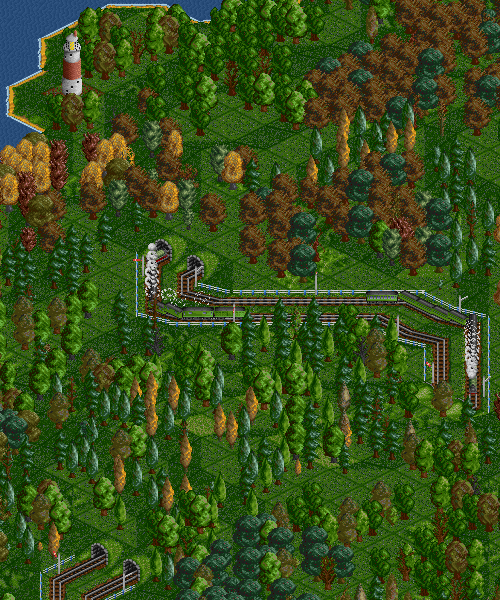 Continued from above. Last two. 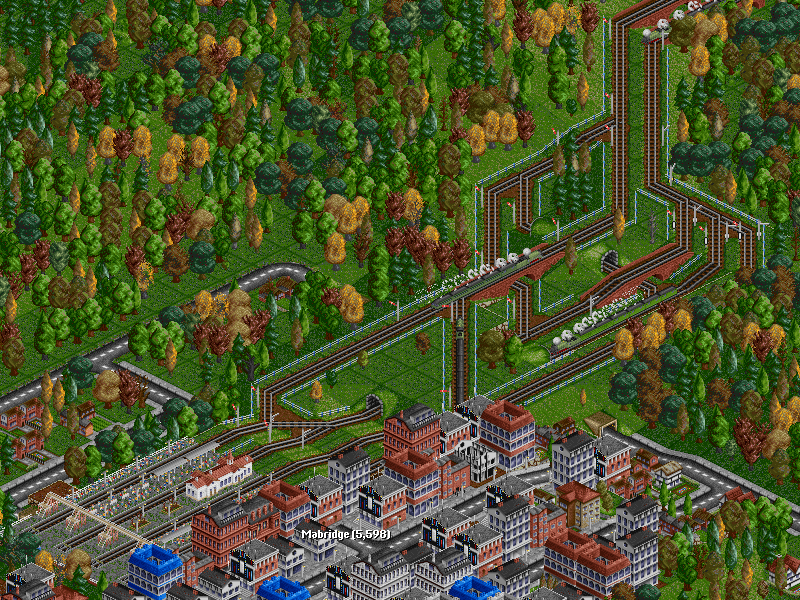 Finally, the terminus station of Mabridge. It's the only one to have more platforms than it has PBS signals. While the entrance is unfortunately very large, you can't complain about the way trains navigate it.
Little Hendingstone Transport, 4th Jan 1938.png (163.03 KiB) Viewed 14689 times 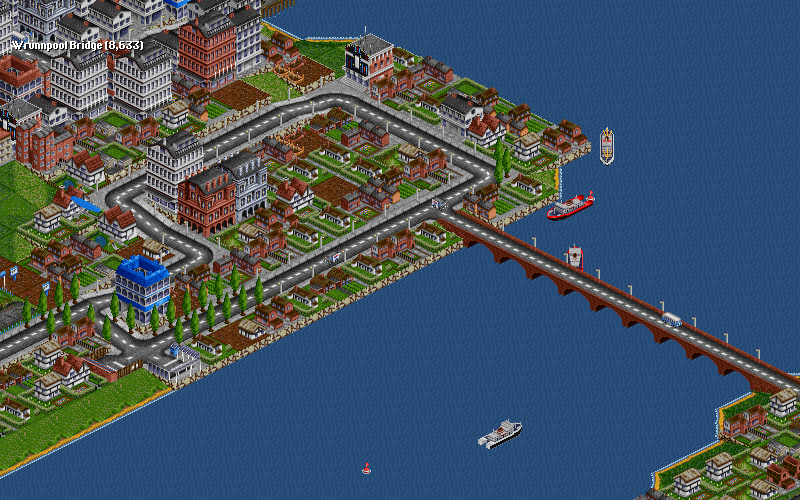 These three station is the busies station in my network.

Servicing mainly for main line P01, there are two station that also servicing for other line (P02 & P04) making it the busies area. I have split these three stations to passenger and cargo using stepping station.

orcaz wrote:These three station is the busies station in my network.

I asume that you have written a handbook for using this huge network?

He, 2 more screenshots of my new odisea with my new used OpenTTD source code and more grf's than my others screenshots ^^

RiTi wrote: I asume that you have written a handbook for using this huge network?

Here the latest service map. P stands for main line, PX is for the branch line. P09. and P10 are in contruction and have been delayed for almost 1 year. Local authorities sure give a headache.

My UKRS game has just become even more British.

This screenshot of Lartfingburg in the early 40s shows the new UK Roadset with the UKRS, HOVS, Av8, UK waypoints, and other generic western architecture that could be British or not.

It also shows a pathetic amount in the bank, especially given that inflation is off..less than £8 million. But I spend tens of millions every year bribing the local authority. 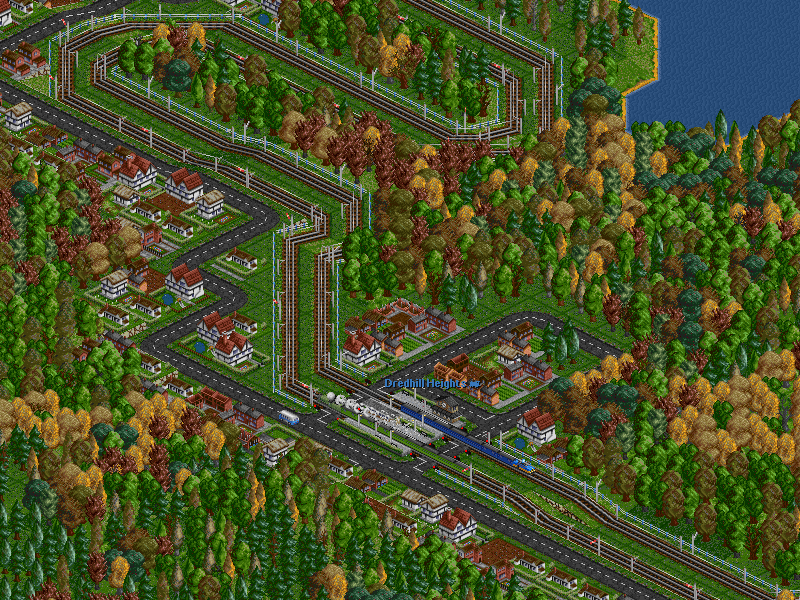 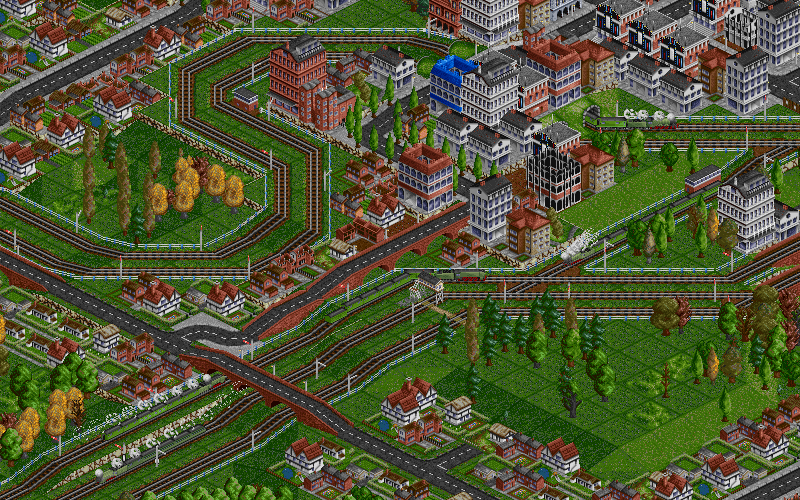 The third generation of Pacifics came in 1942, the 4-6-2 Merchant Navy, also for express passengers. Here are two of the new Merchant Navys, as well as an old Pacific and a Streamliner.
Little Hendingstone Transport, 21st May 1942.png (127.39 KiB) Viewed 19026 times

Besides, I probably own 1/3 of all the road tiles on the map.

A few screen shots from a game of me with a friend. I just love busy spaghetti networks