Those track crossing is not the problem. PBS helps.

Now I try to explain how is the situation.

There are four tracks, 2 tracks in each direction. The outer track are often used by passenger train (5-cars for line P01). and those trains stop at each station. There are also other trains that skip those station. When the passenger trains stop, it cause some trafic-jams.

That why four tracks system came in. All trains except the passenger train use the middle tracks. By the way, only some part have 4-tracks. For now, these 4 tracks make a skip-way for 4 stations only. Other still use 2 tracks.

Just a coverup for a station walk

Don't panic - My YouTube channel - Follow me on twitter (@XeryusTC) - Play Tribes: Ascend - Tired of Dropbox? Try SpiderOak (use this link and we both get 1GB extra space)

Looks nice, but how do you get up production with only two station entrances for two forest that with, I think, a huge production?
Keep life simple...
Top

Looks nice, but how do you get up production with only two station entrances for two forest that with, I think, a huge production?

The production of the two forests wasn't so high, they produced a total of ~240 tonnes every month. I only had a few trains running to that station.
I can't look up what for production the station exactly had because I never saved the game

.
Don't panic - My YouTube channel - Follow me on twitter (@XeryusTC) - Play Tribes: Ascend - Tired of Dropbox? Try SpiderOak (use this link and we both get 1GB extra space)

To deal with a large number of trains I had to build a kind of snakepit. You see in pic 001 and 002 the snakepit for 8 main railroadlines (4 lines to enter and 4 lines to exit). This all is one station, situated in the corner of a game. There are waypoints to force the trains to take the right track (no waypoints mean that all the trains take the short way, resulting in huge traffic jams).
In the corner there are 2 big cities with a total of 3 main stations (see pic 003). The main stations are divided in one to one lines and ro-ro lines. About 400 trains are using the 3 stations. I think I can set up a max. of 800 trains before jamming gets a problem.

(And yes, I use tunnel crossing).

Just completed "stage1" of my game - connecting all coal mines on the map (512x1024) with one power station. 273 trains going through this station. 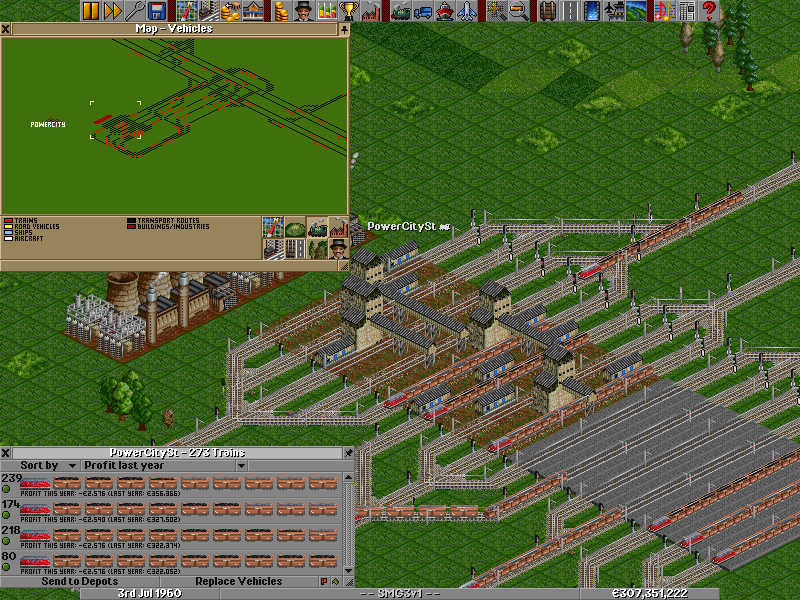 Just to show that mine is bigger than yours

Don't panic - My YouTube channel - Follow me on twitter (@XeryusTC) - Play Tribes: Ascend - Tired of Dropbox? Try SpiderOak (use this link and we both get 1GB extra space)

XeryusTC what do you do for a living, one look at that and it reminds me of an electerial curcuit, you know the ones that you find on a pbs board.
Top

XeryusTC wrote:Just to show that mine is bigger than yours

That's the way we want to see screenshots here

# Programming is like sex, one mistake and you have to support it for the rest of your life. (Michael Sinz)

XeryusTC wrote:Just to show that mine is bigger than yours

Size doesn't matter, it's the way you handle it. But it sure looks nice Xeryus

this is actually from my TTDPatch game, but someone over here at the OTTD forums wanted to see it, and i can't find the post.

this game has UKRS V2, and UKRSI for UKRS V2, therefore the steelmill needs coal too.

down to the southwest is towns, coal mines and iron ore mines. up to the north east is a powerplant(which you can see) and a factory.
therefore the coal and iron trains come up to the steel mill and the power plant, , steel trains go up to the factory, and goods trains pass through back down towards the towns.

the genius part is that 2 way signal at the entrance to the south section of the steel mill factory, that allows passing trains to go down the middle lane, while also forcing trains to take the north bypass lane to the north part of the station when the 2 way signal is red (either train still entering, or both platforms full with a train waiting to enter)

it looks like i just happened to take a screenshot at a not so busy time, but IIRC there are about 35 trains that either pass through or use this station, and it is a rather small line.

JPG SUX!!! USE PNG!!!
There are times when JPG is useful, TTD screenshots is not one of them. Please use PNG instead.

My game, got 394 trains running at the moment....and some busses ^^
some very bussy points in network

another screen and save file:

Three screens from my latest game, taking place in Africa and Middle-East!!

Hopefully it will handle everything I need:

Well I decided to put some pics up...

My most complex savegames' first station - 4 farms connected to one factory, with my two-staged Ro-Ro design

Same savegame - my biggest station here. 7 farms to one factory. It's big and I like it altough it isn't very busy (yet) 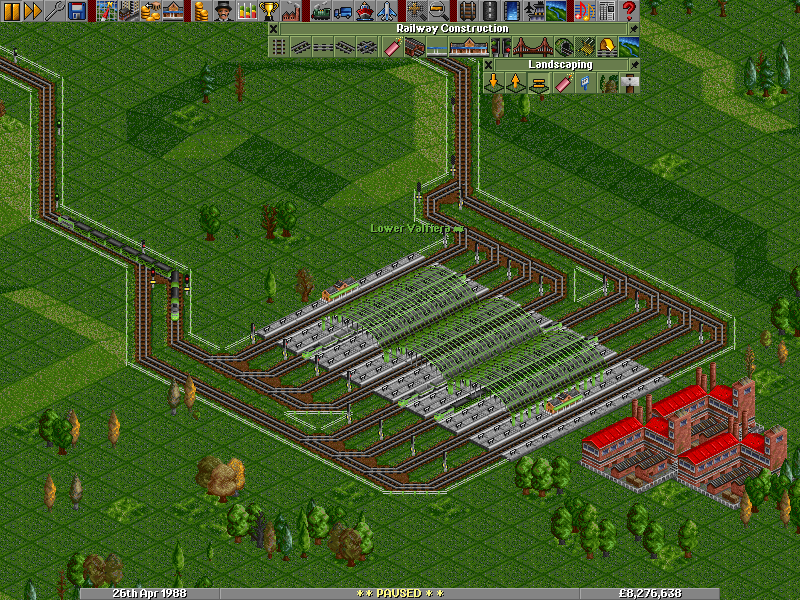 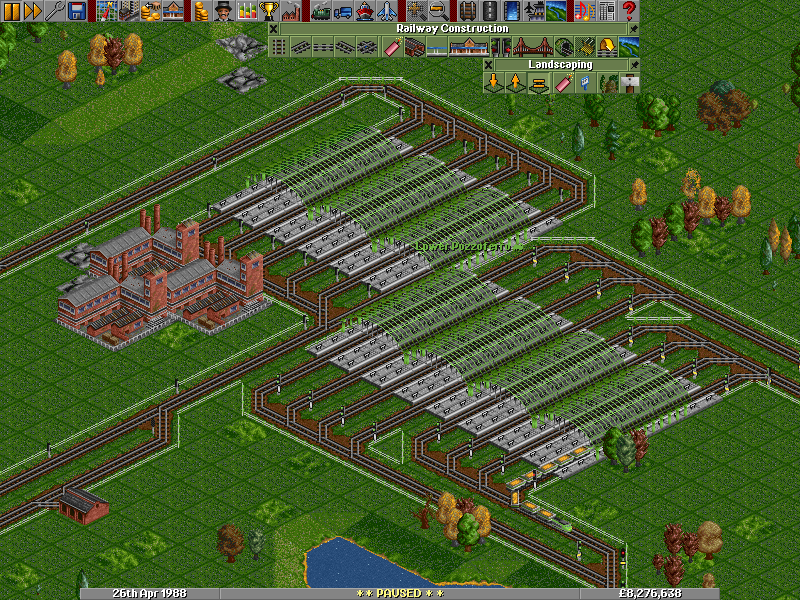 Top:
Little Hendingstone is the largest town on the map, so the largest station was also placed there. The idea was to have it as a terminus for longer distance trains, and a through station for local trains, but I was £200,000 short.

Middle:
The 0-6-0 operates a direct service between Little Hendingstone (now quite large), and Sindhead Cross. When Sindhead Cross also started to grow, I quickly sold the new tank engine to get my money back and bought two 4-4-0s, with accompanying wagons, using a £100,000 loan which I recently payed back. I'm broke again, but no gain without investment.

Bottom:
A few months later, I'm able to afford a 4th Express engine, this time with proper passenger and mail wagons, not the short covered carriage trucks (note the difference in lengths). Stations are now much busier than during last year, and the company tries to maintain a 'one train waiting on every station' policy. The moment one train arrives at Wrunpool Bridge, the waiting train on the other platform will leave, ensuring a good station rating. 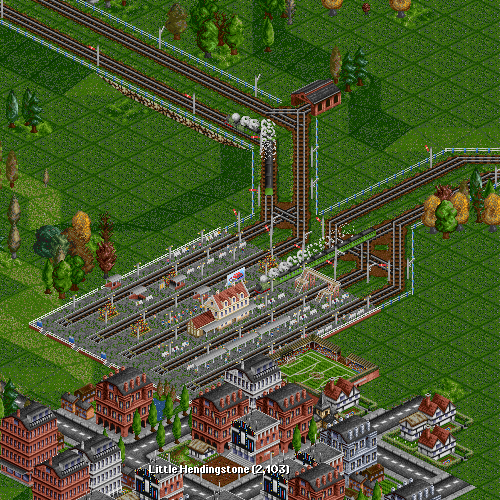 Top:
A small passing lane, which has now lost more money than it saved after three extra trains were added to this part of the network.

Middle:
Little Hendingstone has had its junction expanded to accomodate trains from the south, and, as you can see from all the trees, plans are underway to build two extra platforms.

Bottom:
Lartfinburg is our most unique station, the only one with underground parking.

It is well connected to Little Hendingstone and several other cities, so the company is expecting to buy some road vehicles pretty soon. 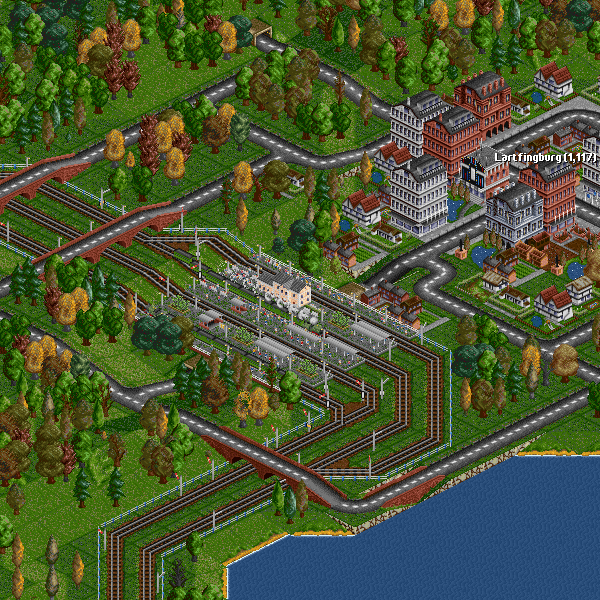 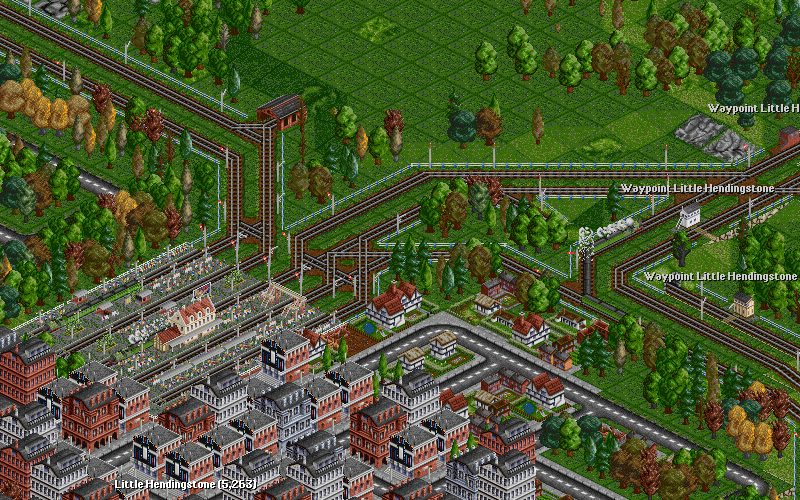