Screenshots of your games! All Transport Tycoon games acceptable (including TTDPatch and OpenTTD).
Post Reply
602 posts

The City Of Kiev. Passenger and freight station. The beginning of winter.

Farm between Kiev and Dnepropetrovsk

The City Of Kharkov

Coal mine between the Black sea and the Caspian sea

Farm near the city of Astrakhan

Farm and fruit plantation near the city of Astrakhan

The City Of Astrakhan. Refinery oil.

The loading station of fertilizers. A railroad line between Astrakhan and Baku.

The City Of Baku. Oil mine

The City Of Saratov. Grocery plant.

The City Of Vyatka. Grocery plant.

The City Of Kazan. Refinery oil.

Farm on the coast of the Aral sea

Farm and fruit orchard near the town of Aralsk. Loading different goods on a freight station and sending to the city of Tashkent.

Railway Between Tashkent and the Aralsk

Unloading iron ore at a steel mill. Transportation of steel to the river Bank. Transport steel by ship to the coast of the city of Irkutsk.

The Village Of Obdorsk. Cannery. Unloading of ships fish to the plant.

A bit of history about the city of Salekhard.
Salekhard (formerly Obdorsk, which translated from Komi language means the place with Obi) was founded as a Cossack fortress in 1595.
At that time it was the northernmost Outpost of the Russian state. Subsequently Salekhard has gone through many transformations, but has always remained an administrative centre. In 1635, the town was renamed in Obdorsk Outpost, and in the late 18th century and completely eliminated, while the Outpost was transformed into the village of Obdorsk, a center of Obdorsk volost of Berezovsky County Tobolsk province. At the same time in Obdorsk Russians began to move to permanent residence, the city became the center of Commerce, it hosts the annual winter fair of Obdorsk, with a turnover exceeding 100 thousand rubles. Merchants brought here flour and bread products from metals and jewelery, cloth, wine and tobacco, and took away furs, walrus tusks, fish and bird feather. In 1897 in the village there were already 30 houses, 150 retail stores and were were 500 permanent residents, the main occupations were hunting, fishing and trade. In the years of Soviet power Obdorsk became the capital of the newly formed Yamalo-Nenets national district, and in 1933 received a new name – Salekhard. Transformed into a city of 20 June 1938. Today Salekhard is a modern center of cultural and business life.

Navigation path from the sea to the village of Obdorsk.

I decided to show screenshot, which I sent for competition December "Christmas Markets" 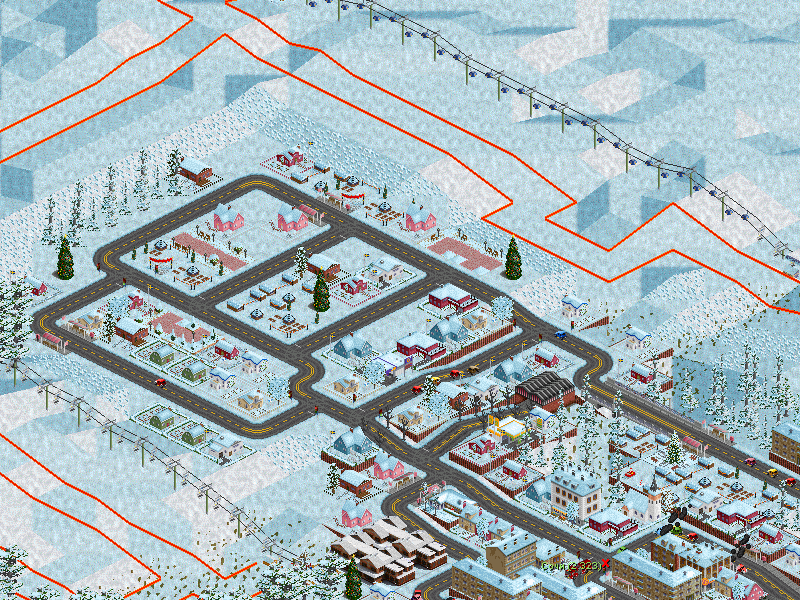 Even was another option - gif screenshot

Company info.
The number of transport (The end of 1931):
341 trains
316 road vehicles
139 ships
13 aircraft
The aircraft is still only fly between Dnipropetrovsk, Kharkov and Kiev. In the future the company plans to build airports in other cities.

Map scenario. As you can see on the map, there is a development of Siberia. Construction of new Railways. The extraction of mineral resources - sand, coal, oil, iron ore. Harvesting of forest resources. Fishing in the seas in the Arctic ocean, in the area of Sakhalin island, near the city of Vladivostok.
The population is growing in cities and towns. Most major cities - Moscow (44612), St. Petersburg (22957), Samara (19683), Kiev (18002), Tsaritsyn (12250), Saratov(7387), Kharkov(5898), Astrakhan(4628), Baku(4603) and Kazan(4153). In these cities the population is over 4000 people.
In most major cities is very well developed transport infrastructure - trams are the main transport for the carriage of passengers. In Moscow, the buses still used to transport passengers on the 4 train station.

Coal mine in Siberia

The railway between Omsk and Novonikolayevsk (Currently in Novosibirsk)

Logging and oil production in the area of the Ob river,

Another area of logging in the area of the Ob river

The City Of Tomsk. Paper and furniture factories.

The City Of Petropavlovsk. Glass and food factories

The City Of Kurgan. A sawmill and a factory for the production of goods.

I plan to explore the entire map and build the TRANS-Siberian railroad to Vladivostok. Soon will be new screenshots from the game

The TRANS-Siberian railway between Tomsk and Krasnoyarsk, railway fork - turn left to Turukhansk

The City Of Semipalatinsk (Located in the North of Kazakhstan). Created bus routes.

The Yenisei River. Transportation on the ships a variety of cargo - coal (power plant in the city of Krasnoyarsk), wood (to Turukhansk) and others.

Timber harvesting and transportation by trucks to the ships.