Screenshots of your games! All Transport Tycoon games acceptable (including TTDPatch and OpenTTD).
Post Reply
214 posts

I'm not very good at documenting the development of my games, but I thought it might be worthwhile to post some screenshots.
I normally play Chill's Patchpack with UKRS2, FIRS and quite a few other grfs.
First lot - Pinlow Minerals c.1990
The main steel mill station, surrounded by junctions for other lines.

Oil refinery station, next to one of the primary main lines.

More stations and junctions, just west of the first picture. This one has some sharp bends that might have been worth dealing with.

These two are a quick overview of my new map. Extra height levels very much in evidence, the network rises from sea level to 10,800ft

This one has some boats, too. Detail screenshots (with trees but not signs) to follow at some point.

Picture 1: West corner of the map. The line from Brickworks Jct on the coast to St Austell summit is rather steep, as is the one through Dovercourt.
The mainline along the coast is obvious at the bottom.

Picture 2: East end (for now) of the network. Other end of the coast mainline is also obvious, Matlock steel mill, its approaches and supply branches are near the centre.
Most of the ocean industries are served by boats.

Smaller screenshots - should show inline now.
Anyway...Aberdaugleddau Docks not as busy as usual, it's one of the three main ports along the coast. 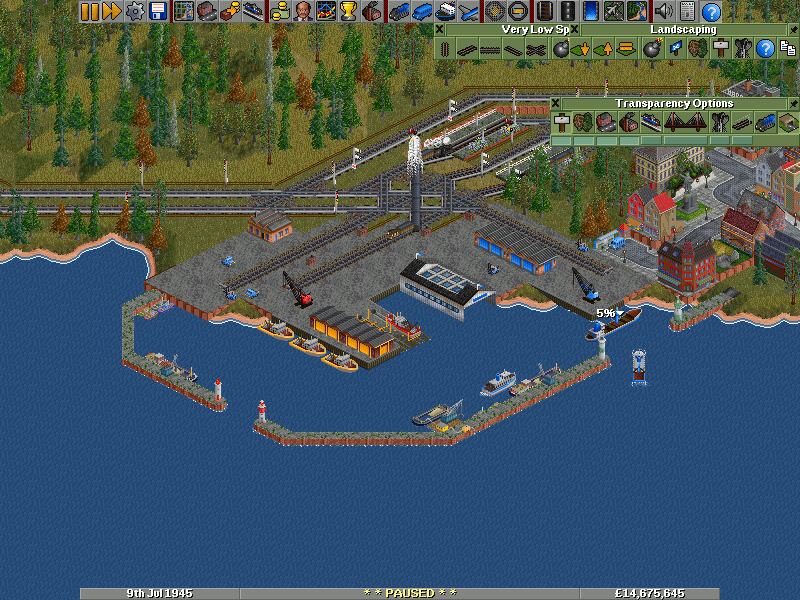 The agricultural stations at Chadwell Heath - Milk, Livestock and Plant Fibres. The milk train is reversing into the station, due to space constraints. The quarry trains go up the hill to Chapel-en-le-Frith. 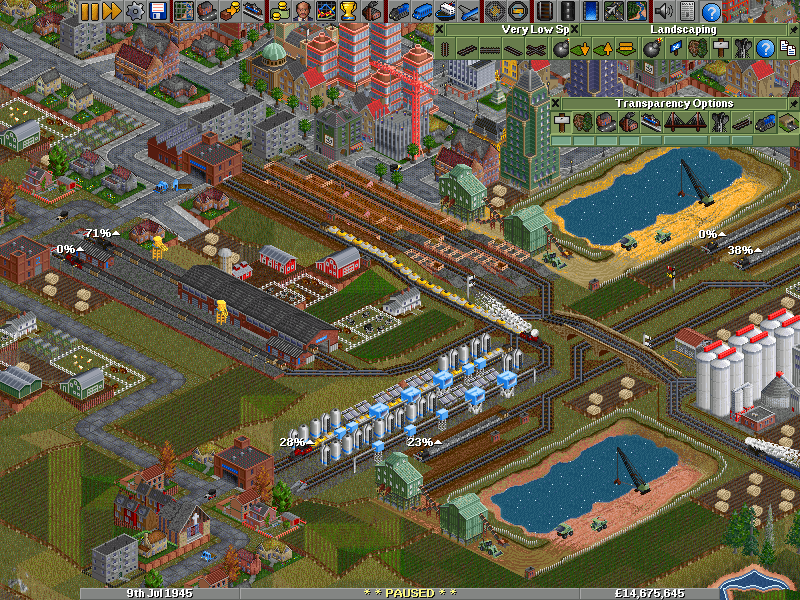 FLHerne wrote: The milk train is reversing into the station, due to space constraints.

Nice job! 90 degree turns look awful, especially in tight situations like that. That solution is much more realistic (if the trains actually went in reverse, that is

Just one picture.
Steel trains cross Crowthorne Viaduct on their way to/from St. Austell. In the background is the twisty, steep, flat-junctioned line which the line via the viaduct replaced, only used now for shorter-distance mineral trains.

Sorry it's been a bit quiet, I've been busy this week.
More screenshots!

Having crossed the viaduct, empty livestock and loaded steel trains slog up Dovercourt Hill. This bit of line is rather steep. 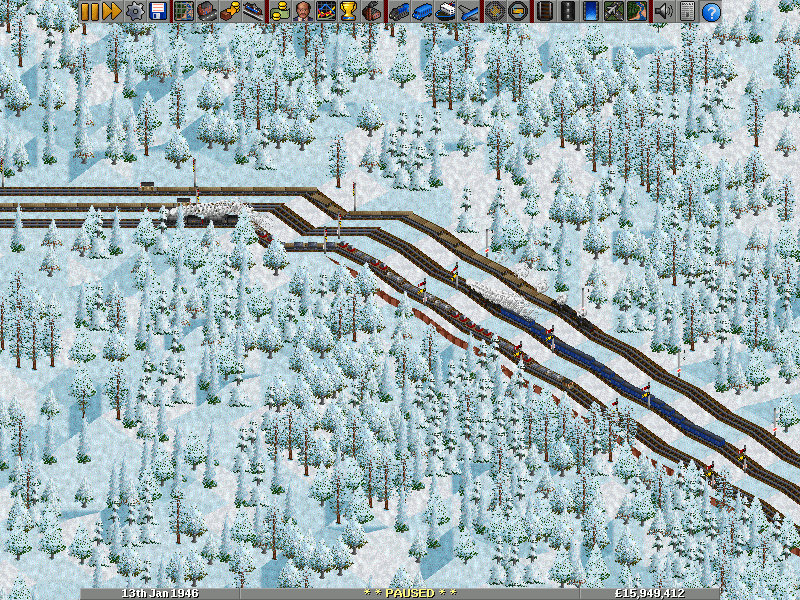 The livestock train above was heading here - Dovercourt Farm. Serving several farms on the slopes of the mountains, it's a transshipment point for livestock and plant fibres. 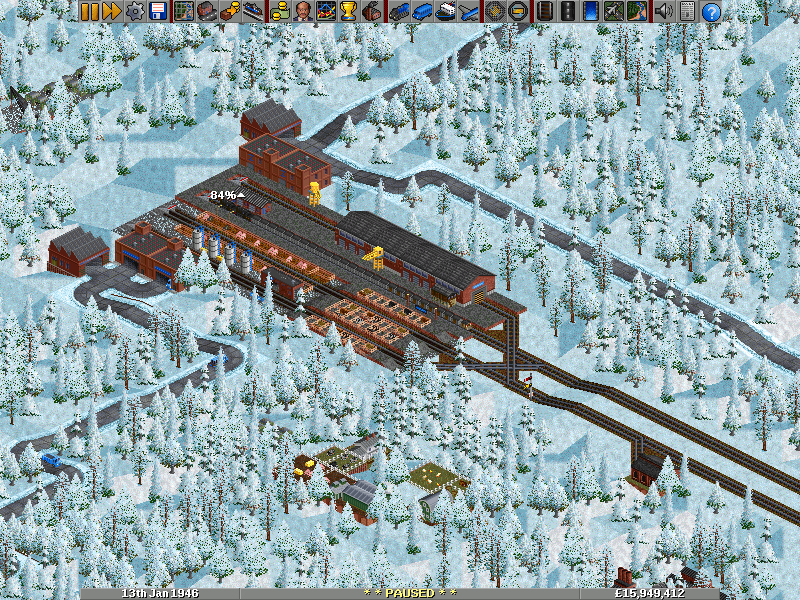 Random screenshot. Fort William, the most westerly station on the network and hub of the small passenger network in the area. A railmotor waits for the platform as a train begins the long climb to St. Austell. 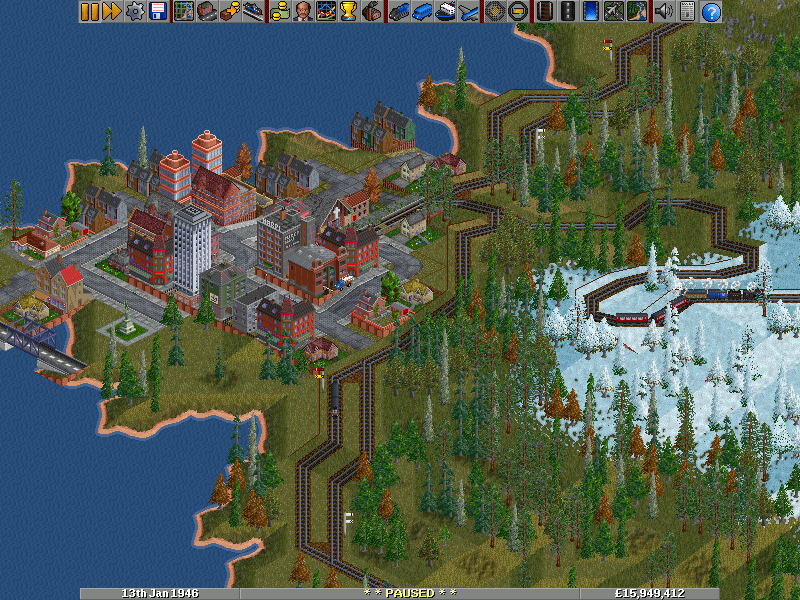 More pictures - is anyone looking?

The steel mill at Matlock - a major traffic centre, possibly the busiest point on the network.
To the top left is the line towards Crowthorne Viaduct and the mountains, lower left is the line up from the coast. To the right are some short mineral branches, and another route to the coast. 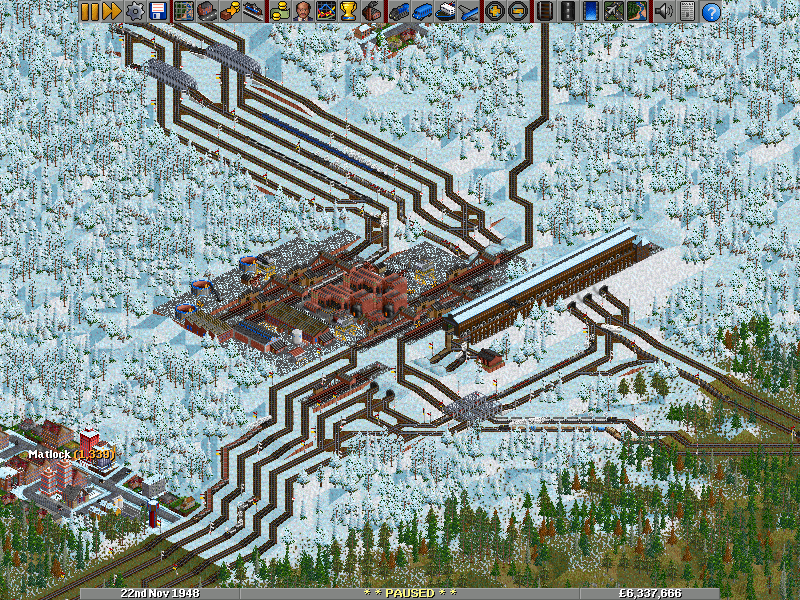 Sutton East Junction, where the line from Matlock joins the coastal mainline. 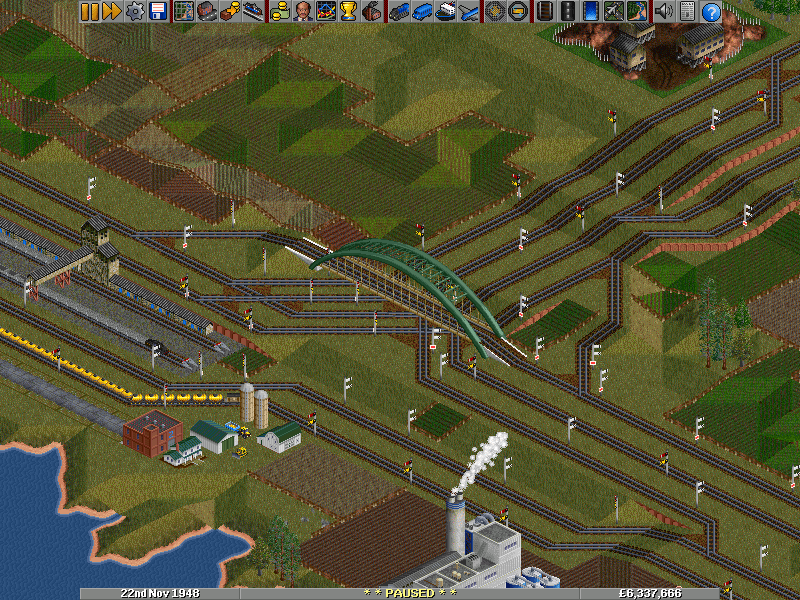 Just east of Matlock, a scrap train comes off the branch, as trains carrying oil and plant fibres to the coast pass. A short train loads at the ore mine in the background. 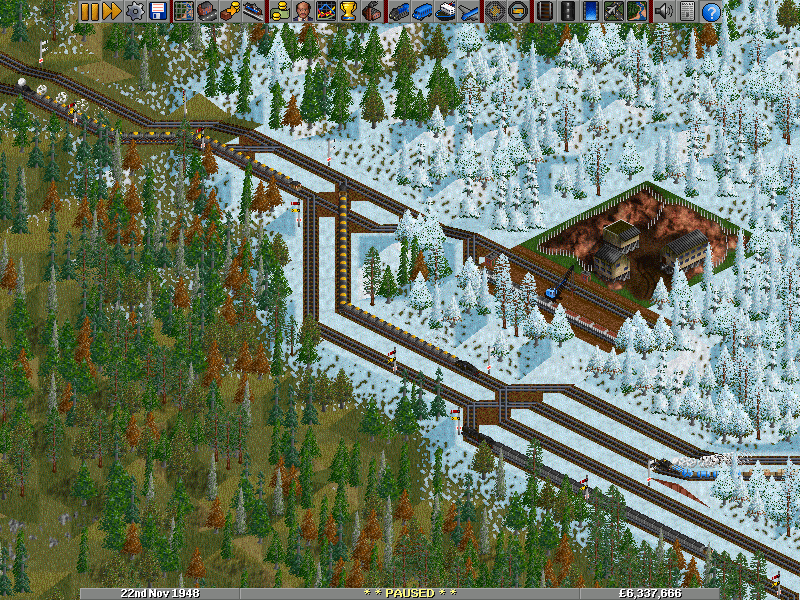 I'll even tell you more: I'm liking what I'm seeing.
Keep it up!
Top

I'm looking I'll even tell you more: I'm liking what I'm seeing.
Keep it up!

Keeping it up...heading east from the second picture of the last post, the first station is the sugar-beet terminal at Sutton.
Lorries bring in sugar-beet from the surrounding farms, where it gets loaded for its train ride to Chadwell Heath. 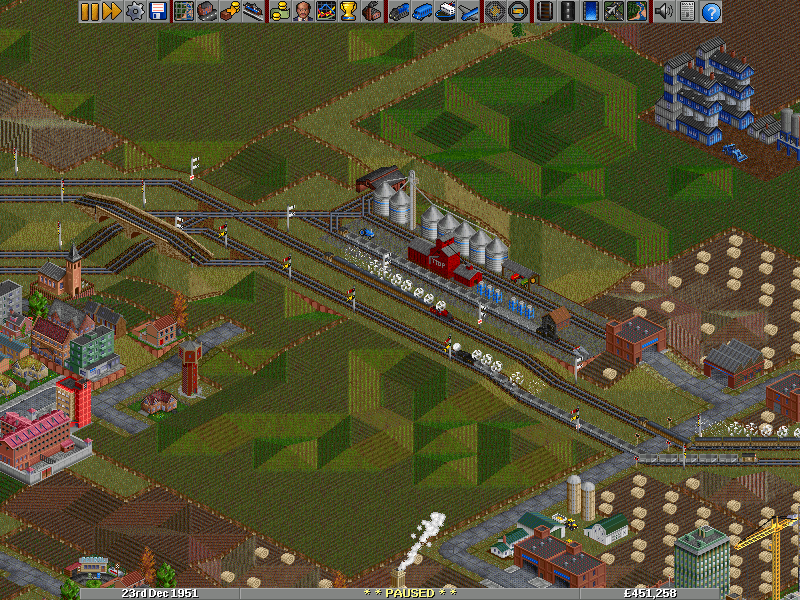 Continuing east, Furness Dairy is rail-served; trains for butter and cream wait for their loads. A livestock train heads east, barely missing some buses heading to Furness, as a couple of sugar-beet lorries trundle around. 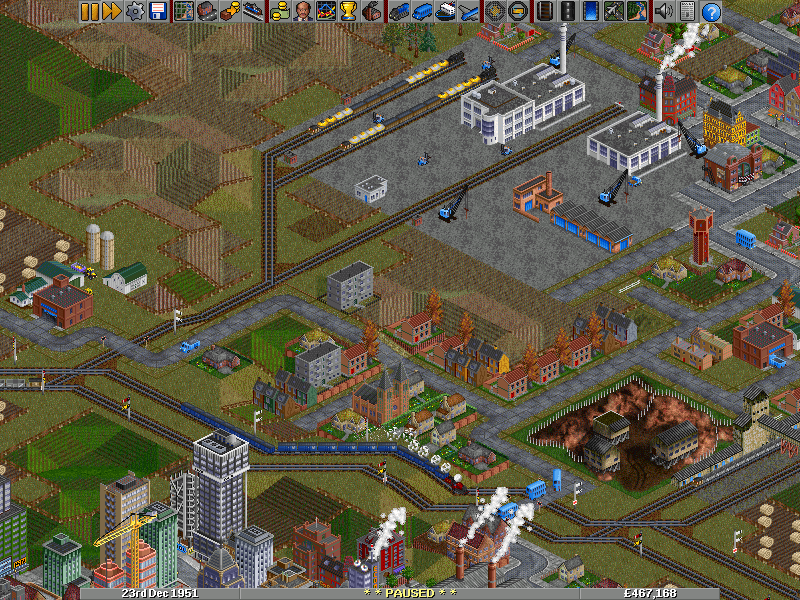 I like last picture and its industrial area with CHIPS stations. Nice Screenshots and I am watching these too!
My screenshot thread
Top

I'm also watching, and admiring the fantastic use of various station bits. Keep it up!
The Revamped West Country
Top

Just a few more pictures, carrying on from where I left off - nothing particularly interesting...

Oil refinery, quarry sidings. I finally found a short, high-volume route to use the HEQS crawlers on 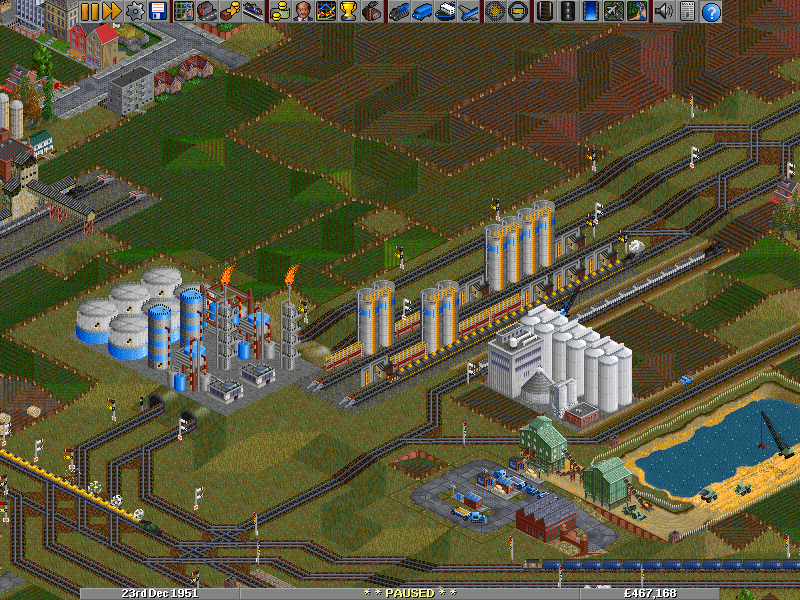 Directly below the previous picture - the junction was recently remodeled, but still causes delays. A chemical train arrives for the factories, while the trucks leave the dockside to trundle across the line, having been filled by the departing freighter. The platforms by the dock are for fish traffic, a fishing boat has just dropped off its catch. 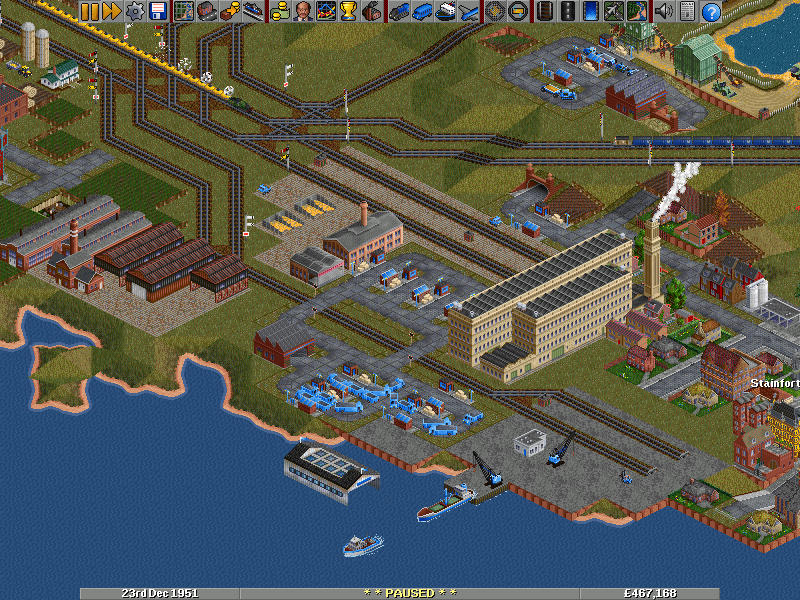 The eastern end of the coast line - for now at least: a sausage train waits in the yard, as another batch of cows arrive to meet their doom

. Branch trains load in the local scrapyard.
NOTE: the hideous trackwork for the depot (and the depot itself) is temporary 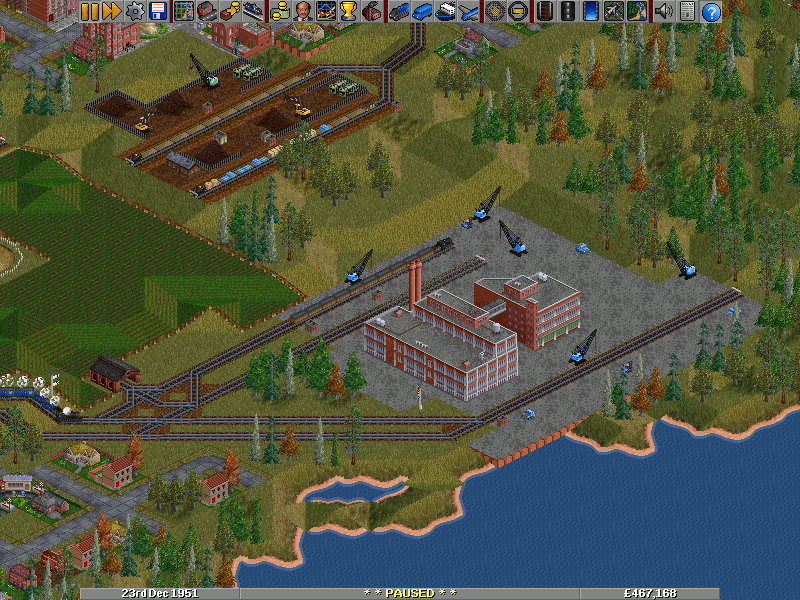 Hopefully I'll have some more interesting stuff next time, I've been quite busy.

Sorry - I've had coursework to complete so not much time to play, or post screenshots.
Anyway, another series of screenshots, this time heading west from Sutton East Jct, along the core part of the coast mainline.

The stone loading point is full, so much so that the fish platforms have stone heaps too! 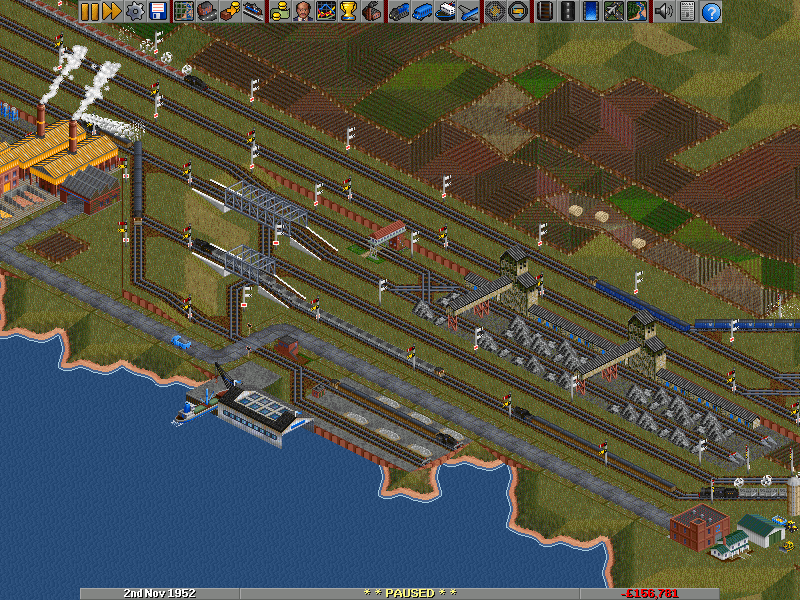 Sugar-beet is loaded at Sutton West, as stone and iron ore are dragged past on the mainlines. 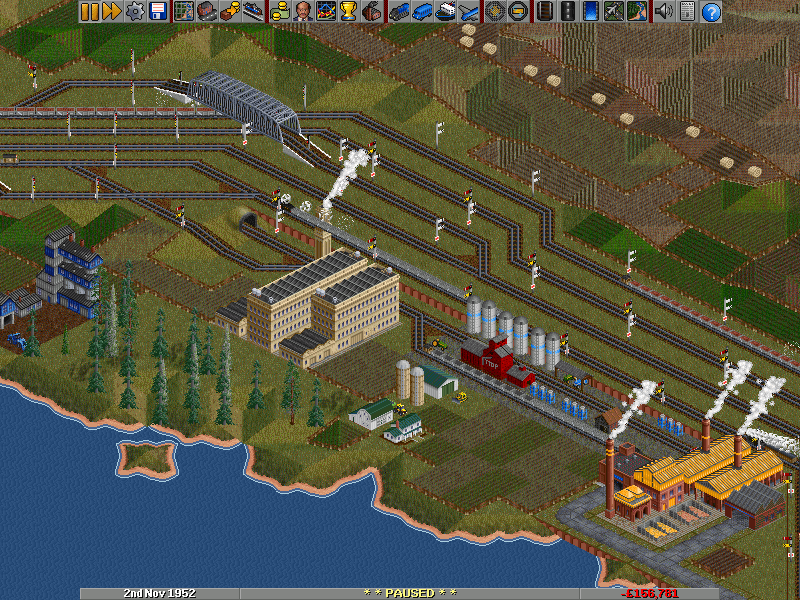 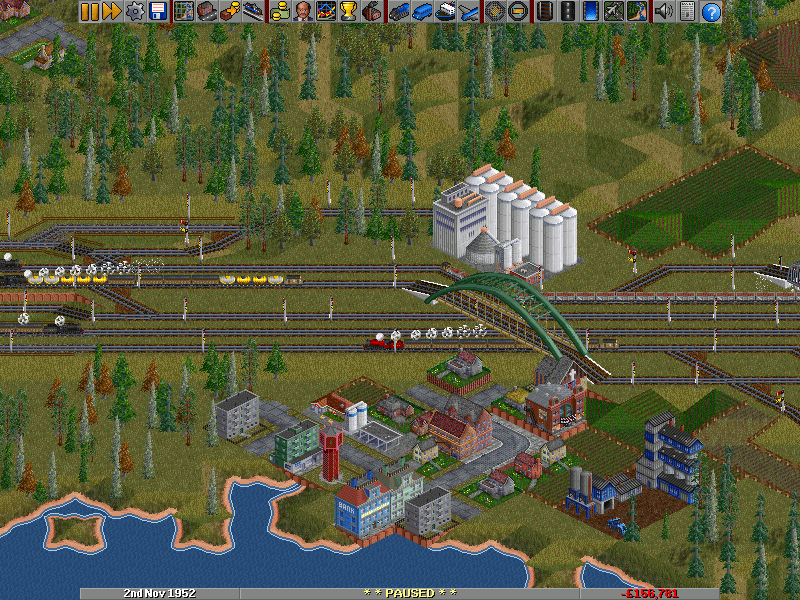 The other half of West Jct - the actual split. Empty mineral trains come down from the mountains, ore gets loaded, random depots should have been removed (again)

.
This is also the terminus of an electrified passenger service. 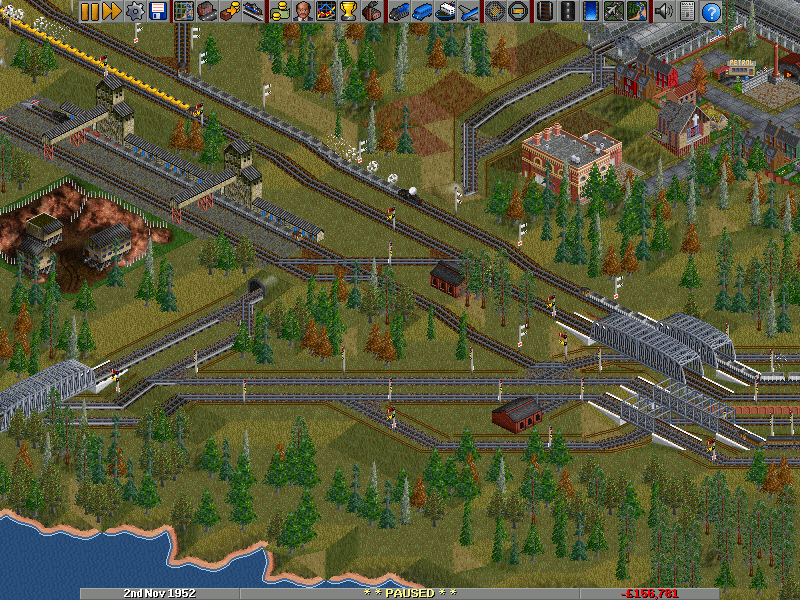 whoops, your running in the red

but why do you use third rails, are their any metro trains running there? i find it rather ugly (don't get me wrong) when normal trains move over third rails

He is using UKRS which has third rail locos.
Visit my screenshot thread--> http://www.tt-forums.net/viewtopic.php?f=47&t=54118
If you want to have a go at War Thunder, PM me, I have an invite code.
Top


why do you use third rails, are their any metro trains running there?

This is also the terminus of an electrified passenger service.

The aforementioned EMU service runs from Stowmarket (with overall roofs, seen in the last shot), and calls at...

...Adderley Park (once the terminus, hence the odd layout)...
[Fish heads to Aberdaugleddau, scrap metal to Matlock via the Preston Heights avoiding line] 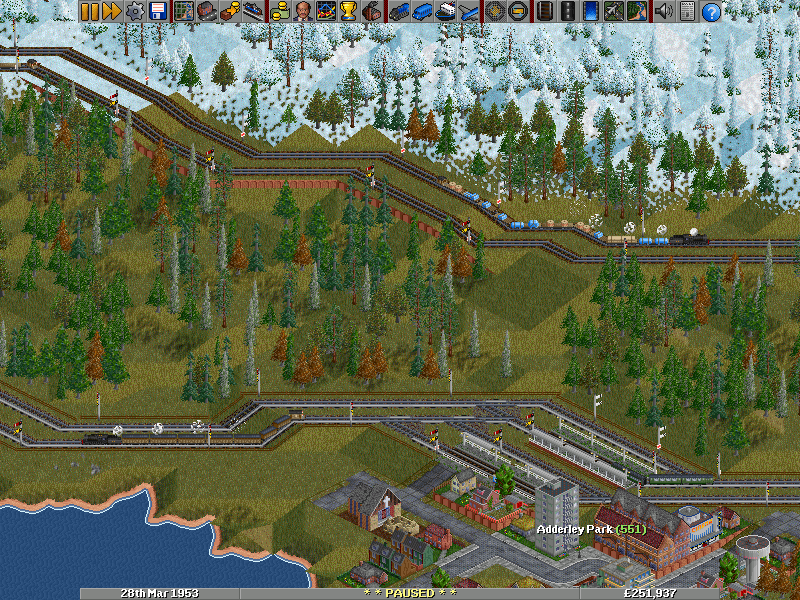 ...Aberdaugleddau (station and docks shown earlier, the other side of town)...
[Buses grind up the hill, a sugar-beet train takes the flyover before heading under the town. I think the brick arch makes a good tunnel portal 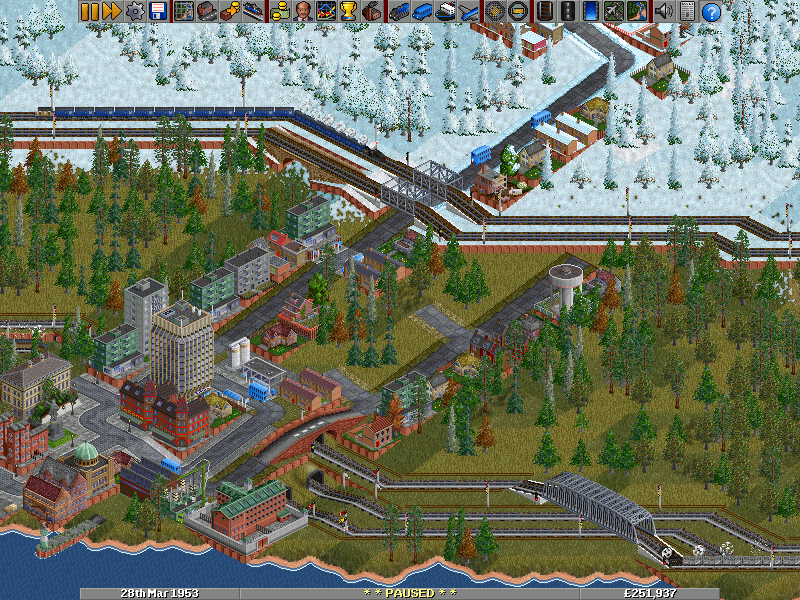 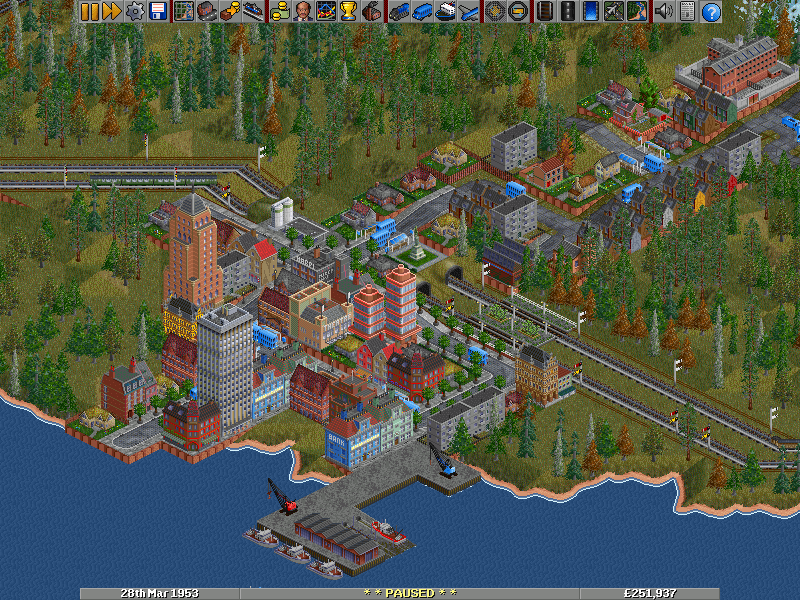 Totally random screenshot from another game...ships in great multitude!
One airship, too. 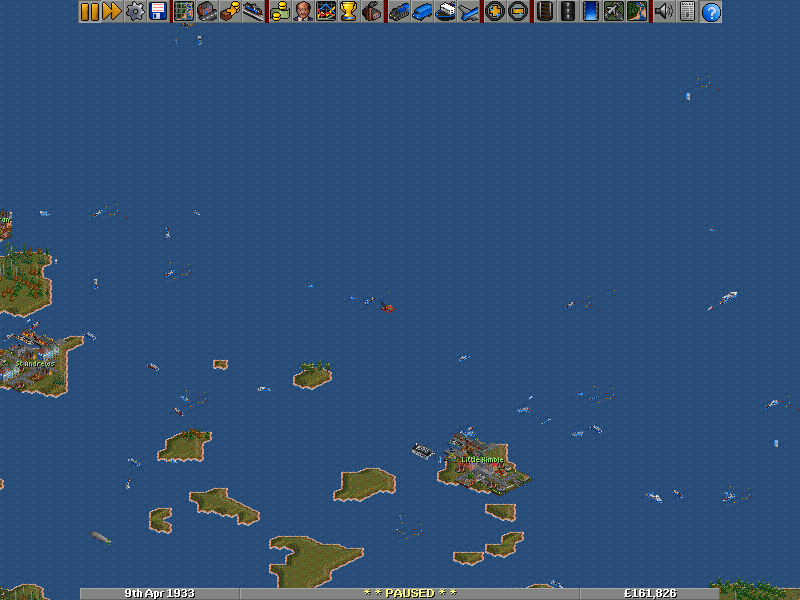