Screenshots of your games! All Transport Tycoon games acceptable (including TTDPatch and OpenTTD).
Post Reply
1063 posts

here is the link to the map used as inspiration to creates most of my lines : http://www.google.fr/imgres?imgurl=http ... QUCh0v4QkA

Polska Rail, 19 Jul 1956.png
a view on Katowice area, it grew, and i added a line(inspired from reality) from Dabrowa to Tarnoskie bypassing the dense area in order to release much of the traffic caused by the steel mill at Dabrowa.
(6.1 MiB) Not downloaded yet

Polska Rail, 23 Nov 1956.png
Zabkowice, and the gold mine near by (truck transfer at station, then gold is sent to Lodz and Warsaw, the two only towns with banks that can t be demolished (they are industry) and also having a stockpile i have to take care of.
(1.34 MiB) Not downloaded yet

Where'd you get that map anyway?

Do you use goods trains running to multiple station to deliver supplies to mines and such?
Top

i think inside Mczapkie signature there is a link to his repository, that s where i downloaded it from.


and yes i deliver vehicules to mines sometimes with one train for two mines (and a last condtionnal order to deliver to a car dealer what could be left), but i supose daylenght help me a lot there to reduce the number of vehicules needed, also note that cargodist is turned on only for passengers and mail, so i can t deliver to multiple station in one go and still need to overfill the stockpiles so that the "second" industry get some vehicules/supplies once it s done.

I do the same with cargo that often fill up stockpiles like fertilizer, dyes or even glass , with some conditional orders to reduce unecessary trips, but well it works well in my game because i serve many industries so i always find a nearby industry that can take the excess cargo (and when not, i try to connect a new industry to my network)

Polska Rail, 26 Fév 1976.png
works around Warszawa started, no urban lines open yet though, just track planning for the future lines and industry's stations.
(4.49 MiB) Not downloaded yet

Polska Rail, 4 Mar 1976.png
a small town, for a change ;).
two local trains are making slow some express behind them, at least the express are much more confortable so people still pay higher price even though local "often" make the trip in the same time (no place for overtaking on this line)
(514.89 KiB) Not downloaded yet

Nice pictures, but this are not all Polish trains, or?
Greetings, S-Transport
My pictures
Top

no indeed, i mentionned it when i started the serie of screenie, i use many trains set : the SBB set (swiss), Dach trains (german, ostereich and swiss), the hungarian train set (GYV), and of course the PKP set (polish) (and the serbian narrow gauge...but I use it nowhere yet)). It gives me plenty of choice of wagons, more or less capacity, variety of looks, same for locomotives.

edit: and the dutch set too
Top

Wow, nice to see my map in right hands

New version will be created soon, but I must run it on Daylenght server, otherwise it will end as usual, with desolated lines instead sophisticated network like here.

This was possible because :
- i loaded your "original" scenario in a new game, THEN i changed the grf list in the running game and started to play directly....i had to make sure i never close the game though because if i saved the game AND reloaded it the script would crash. (if i modified anything in Scenario Editor and saved...i could say bye bye to the industry being created where they belong)

my computer rebooted with a f***** automatic updates...so i looked for a solution to the scriptcrash and :

- the script crashing is not a big issue, well at least i found a solution to make it rework : once the script crash after a reload, make a savegame with the crash and reload it, the script will reinitialize and work like a charm for the town growth part only, the industries are not created anymore though (this solution works until next save and reload where you can repeat the process to keep going on your game)

And about next version soon, may i suggest you add more towns ? in my game now i fund the one missings so it s not such a big deal, but it would be cool i think (nobody is forced to service them, and the one who like to service them could do it)

Also, a small note on your ECSex, i know you said you don t want to add hotels...but i think they would come handy for the smaller town... now i used the logging camps (but only for the passengers not at all for the wood) to help them grow. I use a strong symetry of distribution (95%) and very hard settings for the town growth script (320)...so it s sometimes hard to see the town grow only with it s own houses (not enough people are sent there unless i boost passenger production with a log camp...but sincerely i would prefer a hotel, or even some small houses from the polish sets...to keep the centre of town looking like a village for exemple

... i m not so fan of the town building big buildings once they past 500 pop...i really like the japanese building set for this reason...it allow to keep rural look for towns until 3000 pop, and it s a setting you can choose to reduce ...anyay i start to be off topic now as it concerns more the polish building set than ECSex....

Polska Rail, 21 Mai 2007.png
a relatively important node of the polish network i believe, well in my game too ;)
(1.32 MiB) Not downloaded yet

Great screenshots and descriptions to them. Looks very nice.

This one is really nice:

How did you made the trucks go by the industrial roads in the top right side of the image? You photoshoped it?

BTW. I live about 50km from there

Thanks Lukasz, here is some more then

And no photoshoping for the trucks, they are real and usefull, i use the eyecandy overlapping tiles from ISR/DWE newobject

Polska Rail, 4 Aoû 2032#3.png
and Warszawa have evolued too, and i started using some industries near by. all freight (to grow town and to produce vehicle) delivery is made at the Ursus Vehicle factory
(6.36 MiB) Not downloaded yet

Well done job, romazoon. I like your style of construction of the railway and stations.

Here is some more of my Polish game.

note that i cheated the time back to the 1950', because i just like so much the architecture of the buildings in that period (and yes i use trains that are not from that period....but this i dont mind at all ) 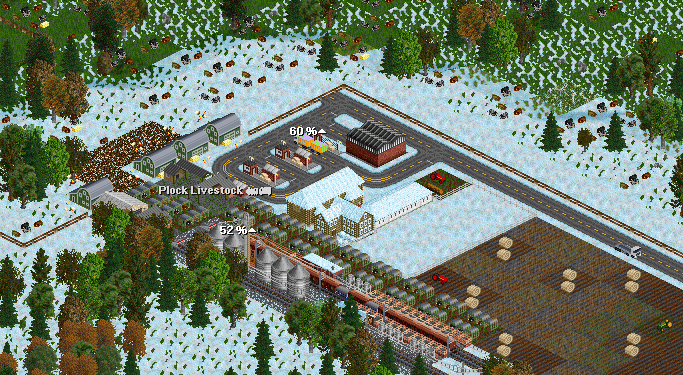 Polska Rail, 29 Mar 1951.png
Warsaw pretty much develloped (but i intend to deliver more needed stuff (growth script) to reach near the 120k population later)
(7.58 MiB) Not downloaded yet

I had to improve the capacities and output of Plock's refinery....so i built a new one near by, they are both at maximum output rate (no oil spiled tough, if there is too much incoming it will be taken by the pumps to Warszawa Powerplant.) 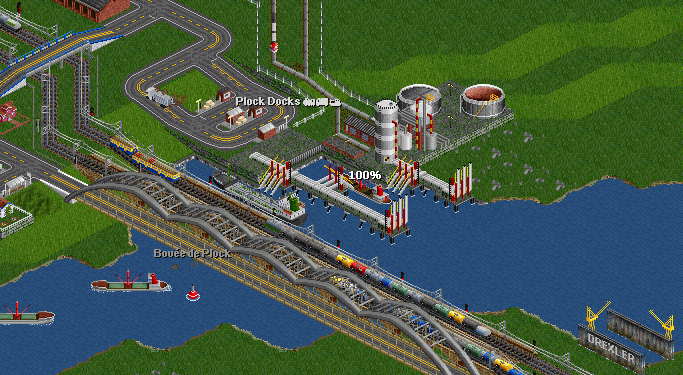 Polska Rail, 1er Sep 1955.png
just a map view (the black and quite straight line with no white points is the pipeline taking oil from Russia to Plock and to Gdansk in te future, it is mostly a tunnel all the way)
(543.03 KiB) Not downloaded yet