Screen 26:
The corner of this local diesel line (which was also very significantly extended to the north-east), was turned into a triangle, with services running along all 3 sides. The new branch to the south-west runs to Connbridge and Tratfield, which were struggling with rather a paltry bus service.

Screen 27:
This station used to be a bit of a bottleneck, but the new arrangement of two through lines and two platforms, and the widening/re-routing of the short span of track to the junction outside Huntford, has greatly improved matters. 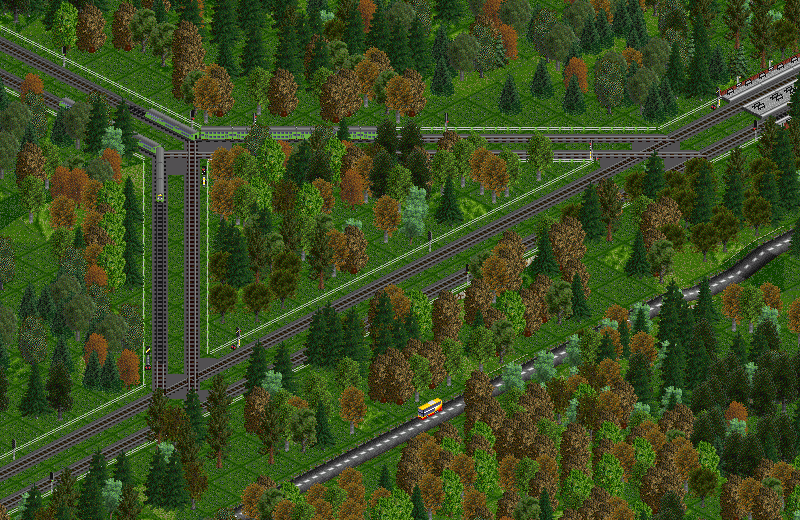 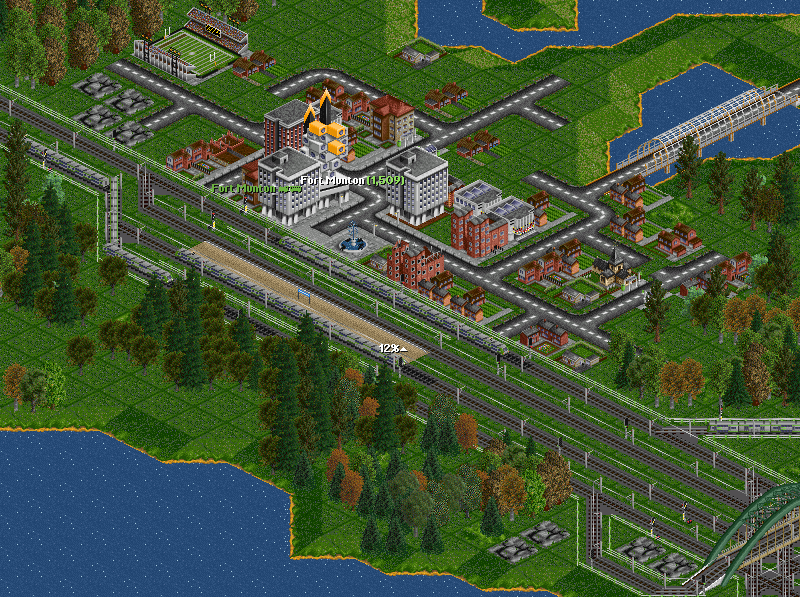 Screen 28:
Nardham is a major junction and a bit of a bottleneck.
Despite the amount of traffic, the demand between Nardham and Brondhattan Springs Woods (at the top) outstripped capacity. To fix this and relieve pressure on the high-speed line, line R14C was extended through two new platforms next to the high-speed ones, to Wunfingford and Traningbury.

Screen 29:
A train crosses the bridge on the new extension of line R2A to the island of Fonnbridge.

Screen 30:
A vessel arrives at the port town of Dronnley. 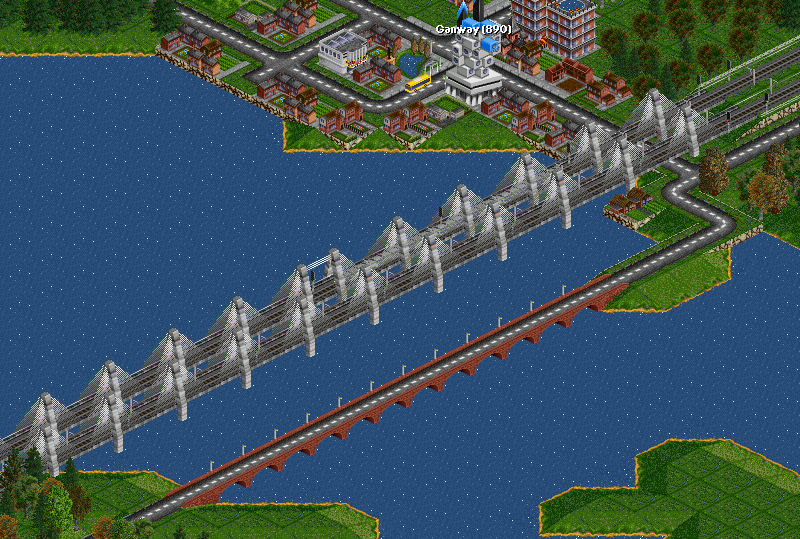 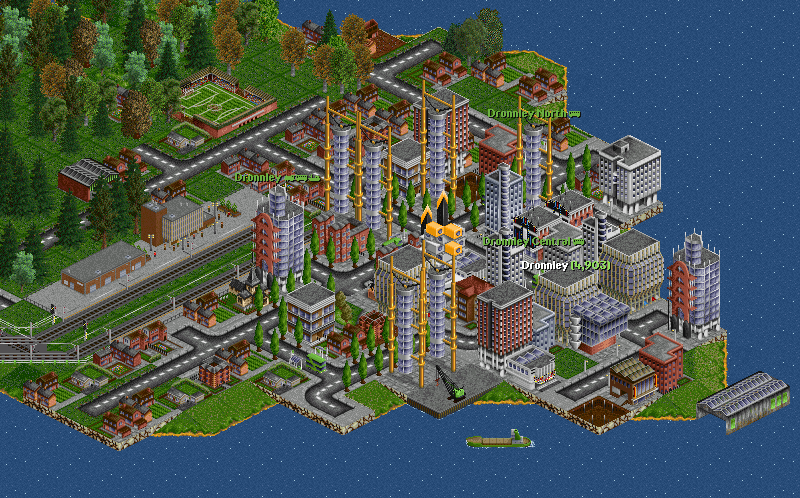 Your network maps is very cool! Impressive work!
Sorry for my ugly English.

Screen 31:
Grindhattan Ridge has rather alarmingly grown to become the third largest town on the map, at just over 39k.
The shot shows the newly re-designed Grindhattan Ridge West station, which now has a new branch of line L17 running across it.
The new branch skirts the north and west edges of the town (and also has a sub-branch to Kenningville), whereas the original branch runs along the south edge and through the centre

Screen 32: has encountered a problem and needs to close :3
Here the (not really very local) local line L11 meets line L15, on the southern edge of the largest town (the Capital?).
The two lines used to share the same two platforms, but this became problematic as I increased the number of trains on both lines. 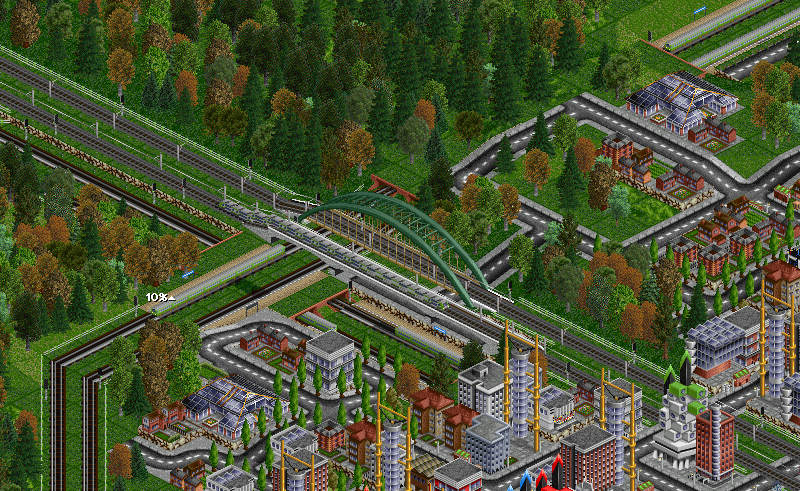 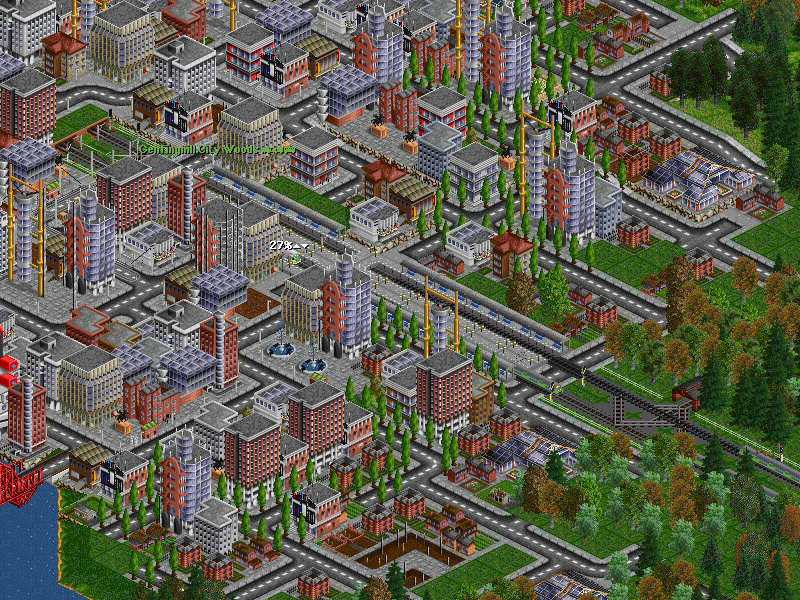 Screen 33:
I re-jigged this area and the routes through it, again, mainly to deal with the hopeless over-congestion at Nardham and the poor rail service at the airport.
Nardham is also increasingly starting to sprawl onto the adjacent island in the lake.

Screen 34:
Slunningpool is ever busy, with about 100 trains calling there and an arrival every 1.5 days or so.
I ended up adding another two platforms to the through section, and having finally worked out how to use the set, rebuilt the whole section using a lovely station from the modern stations set.

Screen 35:
An express train on the viaduct into Sanford. 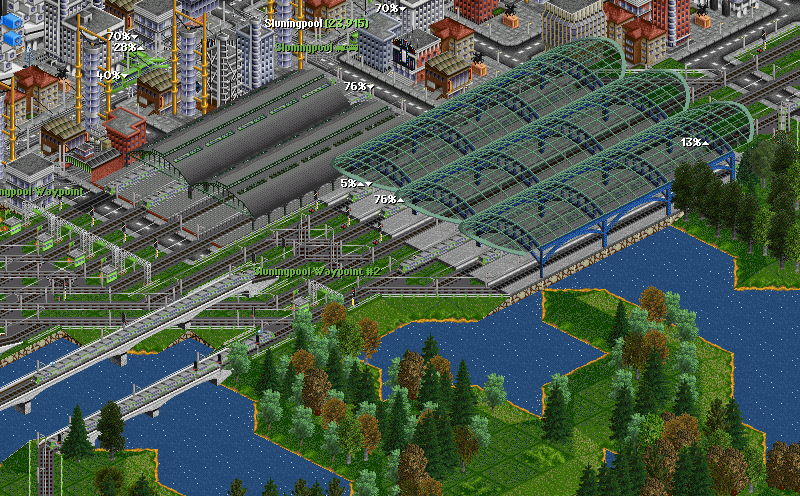 Screen 36:
The coastal town of Paningpool has been thriving in recent years.
Because of the increased traffic, a new light-rail service (L20) was built to Tudstone, calling at Kendinghall.
The new station sits at the top of the coastal cliffs.

Screen 37:
With the introduction of the long-distance express route E7, the track from here all the way up to Drefingford ended up being double-tracked, making it the second long stretch of track to be widened.

Screen 38:
A bus trundles along the new causeway to Rundworth.

I've been doing a fair bit of work on this game recently, so here are a couple more shots...

Screen 39:
Here a diesel train trundle over a bridge on the new branch of line L12 through Great Trondingville.

Screen 40:
Trains on the newly built L21 cross over the mainline between Slundhead and Wardham, at Great Parnington.
Traffic at right angles to the mainline used to be by bus service only, which became increasingly overloaded.
Further north, the new line connects multiple stations in 2 major towns, making changing lines easier.

Network Map:
I've added/changed quite a lot things, and done a certain amount of reformatting since the last map posted in this thread... 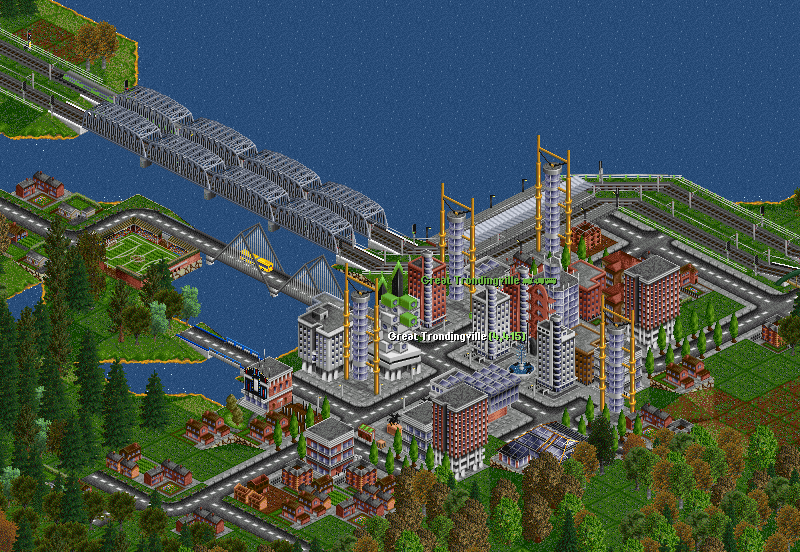 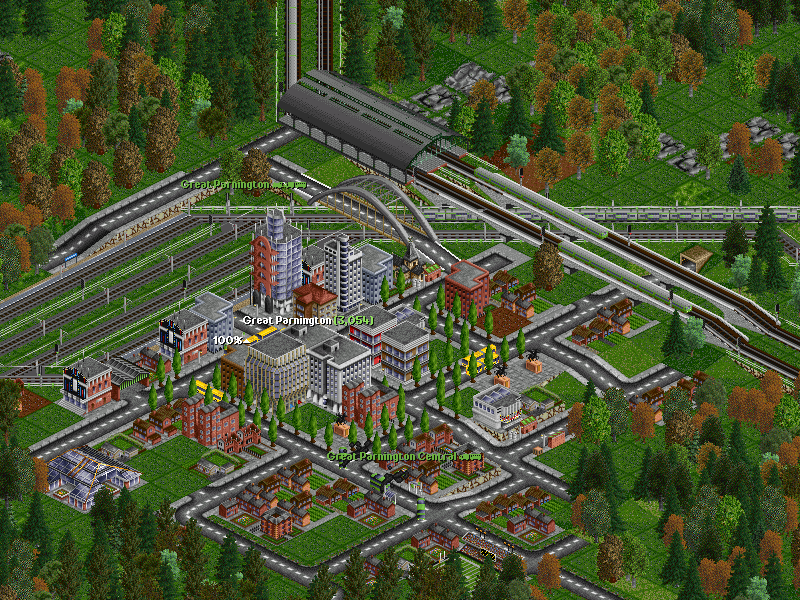 It's been a while since I last posted anything, as I've not had the time or inclination to play as much.
Here are a few recent updates I've made though...

Screen 41:
I'd been unhappy with this station/junction for quite some time, as it didn't make much sense from a passenger routing point of view, and looked quite messy, so after rebuilding a good chunk of it from scratch, the result is as shown.
Along with the physical station changes, a few lines were re-routed to improve passenger transfers.
Line E5A was trimmed back between Drefingford and Overdingham Valley, and line E6A extended to cover the cut section.
Line R8 was then extended with branches to Drefingford and Sunbury.

Screen 42:
The DMUs (L12) coming from the South used to terminate at the station on the left, and a single-track shuttle (L13) ran to the main station and one on the other side of town. This was rather suboptimal though, and caused quite a significant bottleneck.
To get round this, the DMUs were re-routed to the a new part of the main station, and the shuttle route was rebuilt as a double-track system with longer stations. The upshot being that 5 trains could be run, instead of 1.

Network Map:
As well as the above changes, there have been some routing and cartographic changes around Slunningpool, and line R29 has been extended along the track used for R11, between Wadwood and Rinfingford. 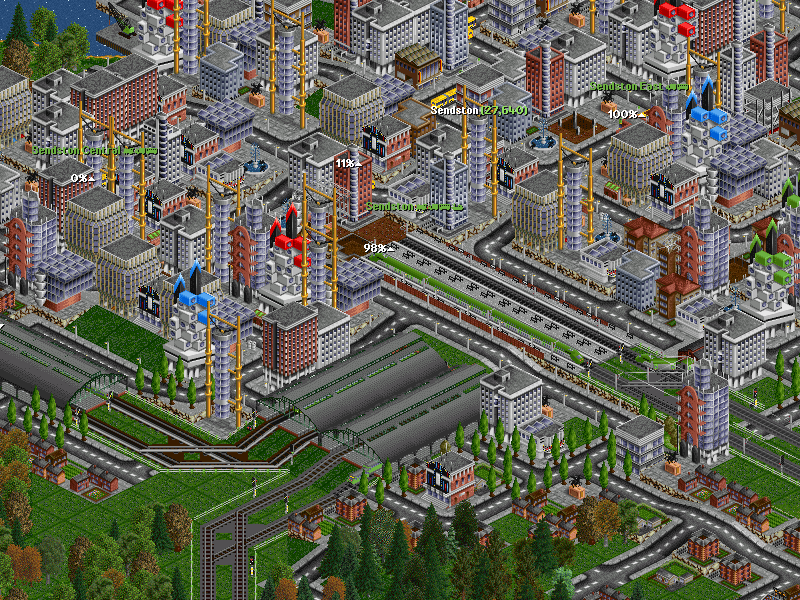 Screen 43:
Route L8, which had previously terminated at Fondinghall Valley was extended through Fondinghall's main station, and out the other side of the town. Eventually it was extended all the way to Genfinghill City Airport (the Capital, the way I see it), stopping at Sindington Central, Gruham and Puhill on the way.

Screen 44:
A small branch was added to connect Gruworth to Hartfield. With this and the main extension, the (rather overcrowded) bus route between Cardham and Rardworth Falls has rail services running in parallel for the whole route.

Screen 45:
Shock horror!
I've actually decided to close a branch line down (more or less a first for me). The line connecting Keningville and Grindhattan Ridge Valley never had any worthwhile amount of traffic, and is even more redundant now that R27 connects Gruningstone to Grindhattan Ridge. 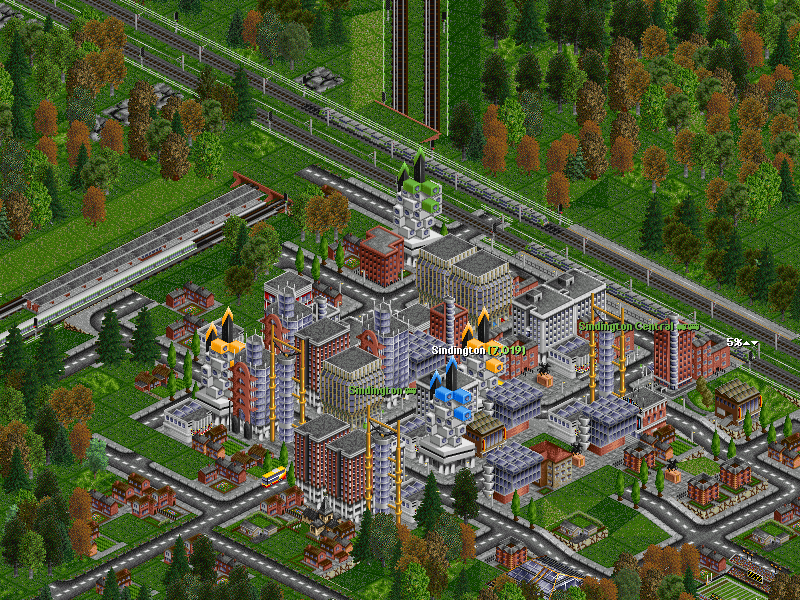 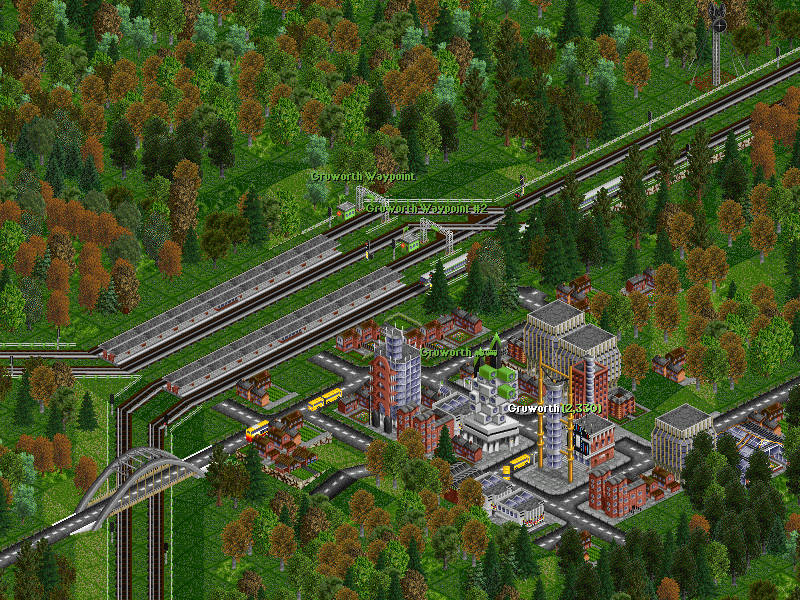 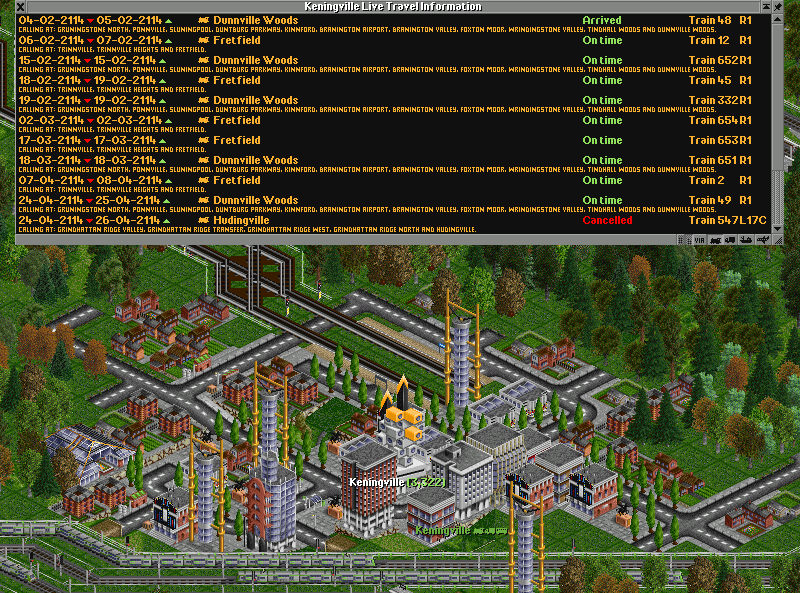 There have been quite a few changes to train routing recently, many of them due to severe congestion and lack of demand between Drefingford and Hudingville, and routing/congestion issues through Windham Junction (the station in Screen 46).
Line E6A has been cut back to it's earlier terminus of Hudingville.
R13 was cut in half at Windham Junction, in part as it had become too long to manage easily; the north-west section became line R30, and the remainder was then extended through to Frefingfield.
Some R9 trains now only run as far as Windham Junction, and not out the other side to the north.
A new route connecting Genfinghill City Airport and Grindhattan Ridge with no intermediary stops, E8, was added due to the huge demand between those two cities.
Line E5B was extended along to route of R20 to Chinnway Woods, as that city has grown quite significantly.
R6 no longer calls at Hadhattan and Puhill Central, instead a short new route between Genfinghill City Airport and Rardworth Falls, R31, serves those stations.
R8B also no longer calls at Grafingford Woods, due to low demand.
As described in my last post, L8 was extended quite significantly, and the L17 branch to Keningville was axed.
Not to mention lots of changes to service frequencies to keep things going (relatively) smoothly.

Back in the good old days...

Nice shots and I love when i see Finnish SM4 multiple units in screenshots (From 2cc set.)
My screenshot thread
Top

I've been re-jigging route E2, the one high-speed train line.
Previously there were too many stations on the route, making it somewhat ineffective as an express service. Furthermore due to a mix of rolling stock types on the line, the faster trains were not really being fully used.
The LOK2000s were replaced with more TGV Duplexs, and the platforms at Brondhattan Springs Woods and Hudingville Woods were closed (and the latter demolished).
As part of upgrade work, the whole line was converted to unlimited speed track and Brondhattan Springs Airport station was also partially rebuilt.
Some trains were re-ordered to not stop at Bunfingbridge, Traningbury Valley and Windham Junction.

This left a bit of a gap between Hudingville and Cardham.
R26 from Hudingville Woods was extended to a new terminus at Slonningstone, via another station at Hudingville, Prondinghattan Ridge, and Cardham Woods.
E8 was extended from Grindhattan Ridge to Cardham Woods.
The two ends of L17 meeting at Hudingville were joined together to form a loop.
The (drearily named) Hudingville stations were then collectively renamed to Hudingville: Central, Westgate, Bridge Street, East, and Common.
A number of stations in Slonningstone, and Grindhattan Ridge main station were also renamed to avoid ambiguity.
Further East, L7 was branched such that some trains from Foxton Moor now go to Windham Junction, to increase capacity through Rartbridge.

Screen 49:
Cardham Woods and the junction on the west side.

Screen 50:
Hudingville East and Bridge Street stations.
The local platforms used to be both terminuses and part of the same station. When they were joined together the south platforms were reassigned to Hudingville East. 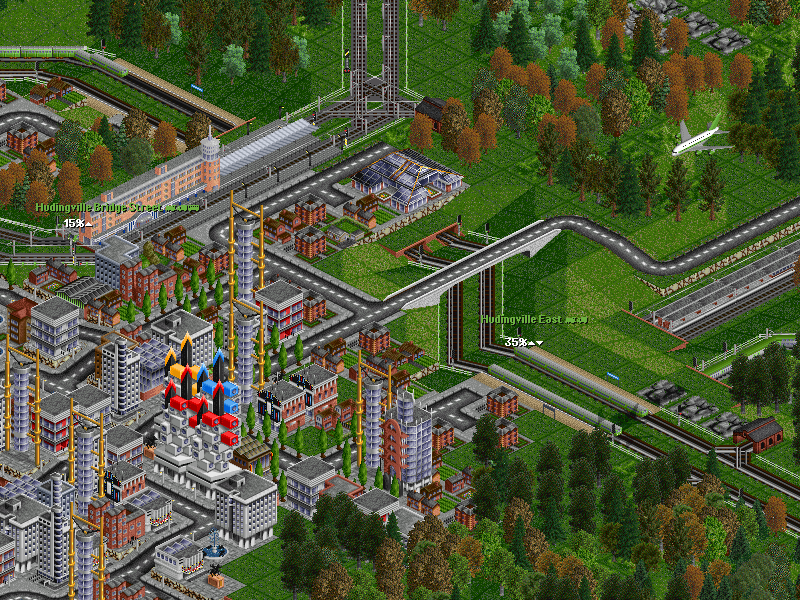 A few shots from around the network.

Screen 51
Bus services in Nardham were extended to cover the islands in the lake...

Screen 53
This island is an intermediate stop for long-distance ferries. 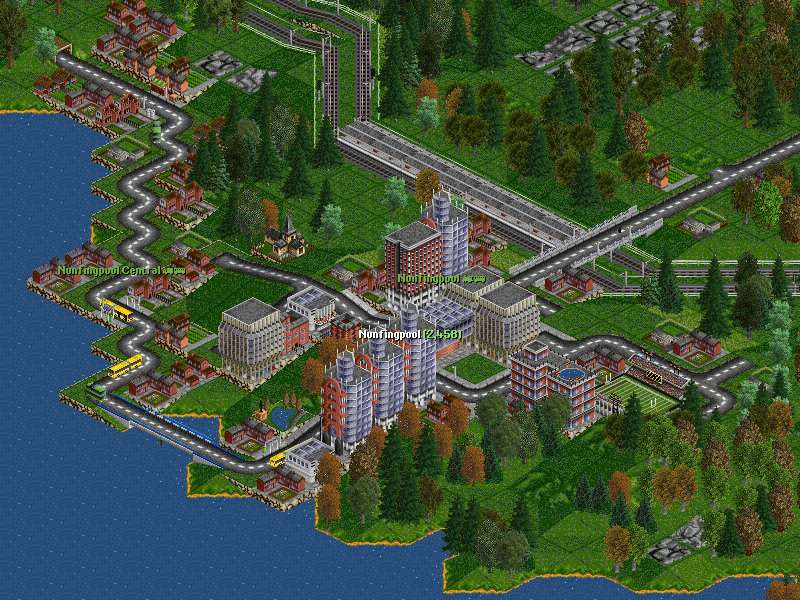 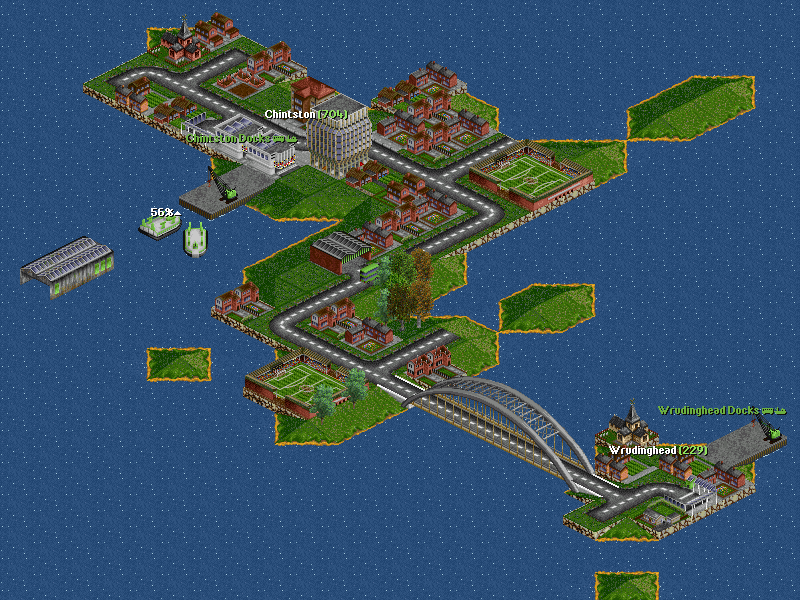 
Most of the changes are around the Farnville Lake area, through Slonningstone, and along the West coast. A new local line also now runs through Rinningley and there have been yet more routing changes through Ponnville.

Screenshots of the more traditional sort will probably come later. ^^

Screen 54:
Wadwood has become a fairly important (and busy) junction, with the addition of the new line to Sludhead.

Screen 55:
Two relatively rural routes cross here at Tindhall, the new line underneath (L25) was built about 130 years after the original diesel route to Tudstone (L9). 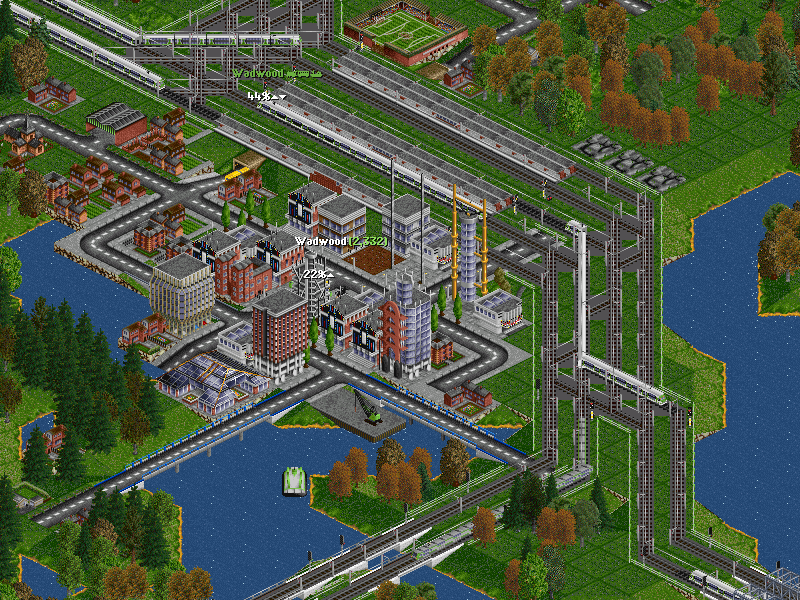 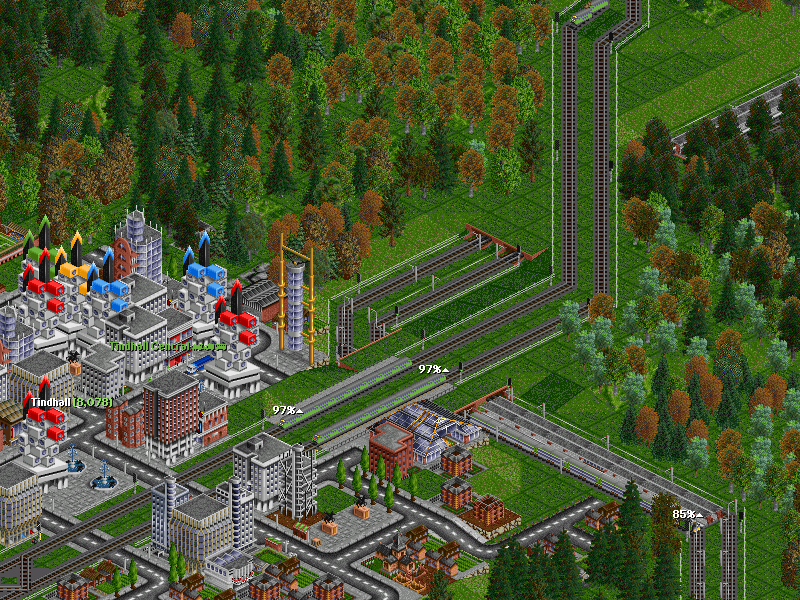 I've decided to give this game a rest, and start another (hopefully better, by some metric). 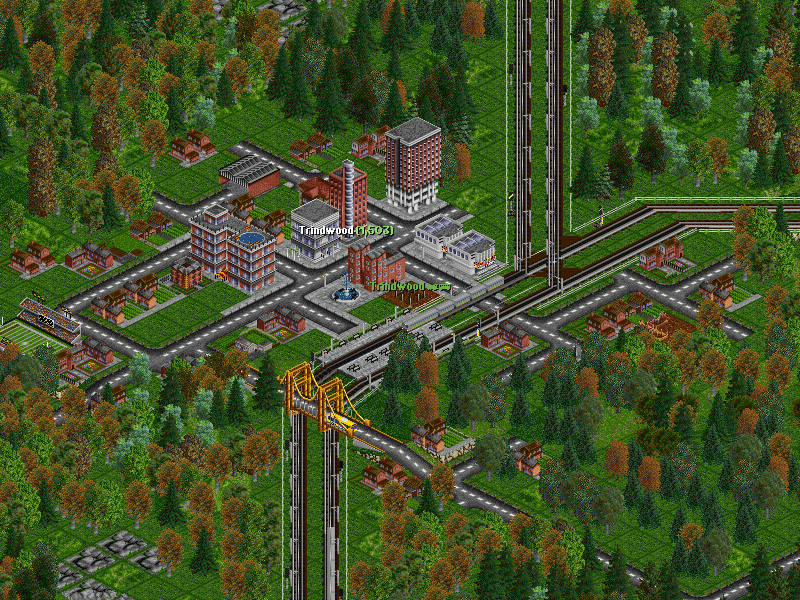