Screenshots of your games! All Transport Tycoon games acceptable (including TTDPatch and OpenTTD).
Post Reply
90 posts

New game, scrapped the old one as I got bored

We join Oxford Transport in its first year of operations, 1950. With a secured loan of £100,000, the company set out to provide local transport in the region. The first step was building a link between the city of Oxford and the nearby commuter town of Southampton. This link was built un-electrified to save money, and because on such a short distance journey, the better speed and acceleration of some electric trains was negated by the cost. An AEC railcar was bought along with an extra passenger car and mail/luggage car.

Commuters seem very pleased with the new fast and frequent service between the two towns, and it is making a tidy profit.

NB. There are file comments! 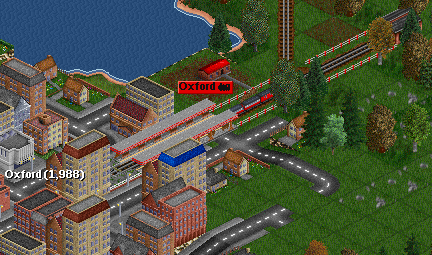 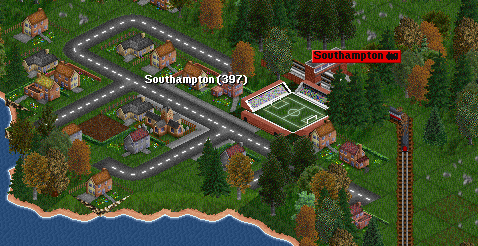 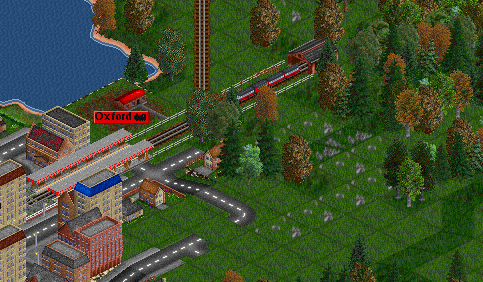 Later in 1950, an extra AEC railcar was purchased to marshal the train in to a DMU. This reduced journey times and increased the passenger capacity, helping the company to keep up with popular demand.
Oxford Transport, 03-06-1950.png (95.9 KiB) Viewed 8676 times

By mid 1951, Oxford Transport decided to build a new line, between Oxford and Dundee, under pressure from shareholders to increase profits. The engineering department decided that a 3rd rail line would be more suitable than a diesel line due its higher capabilities over longer distances. The new line came in on budget, at £25,000, but the new train, a 4COR EMU unit, cost over £50,000, although it had a top speed of 75mph and 900hp. 3 extra passenger cars were bought to bring the train to a total of 5 cars.

The return journey from Dundee to Oxford. The depot has been electrified, as well as Oxford station. Redevelopment of Oxford station to two platforms was deemed unnecessary, because the two services were timetabled to arrive at different times.
Oxford Transport, 01-01-1952.png (214.61 KiB) Viewed 8644 times

Class 165 wrote:3 extra passenger cars were bought to bring the train to a total of 5 cars.

Wouldn't that be a 5COR then?

, they wouldn't exist without your wonderful grfs

By 1953 it was decided that the route to Southampton should be extended, and money was provided for an extension north to Aberbourne, and the possibly further around the lake to the resort of Crosby. Both trains were making good profits, and other extensions to services were under consideration. 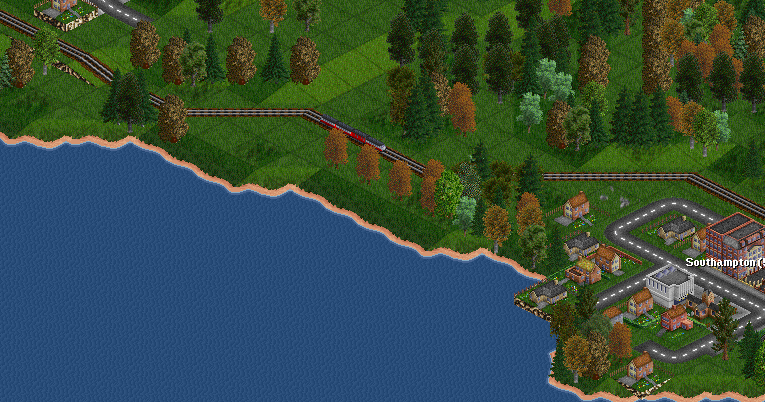 Little map for you.

Get british town names instead of renaming manually!

Meh, couldn't get them to work.
Screenshots

Meh, couldn't get them to work.

Have to load the grf before you start the game and go to game options and select UK Town Names before starting a game.

1 & 2) The route from Oxford-Aberbourne is a real money spinner, and so the decision has been taken to extend it again, around the lake to the sleepy resort of Crosby. To keep the train frequency up, a second AEC DMU was ordered, and a passing loop between Southampton and Aberbourne built.

3) Soon after this, the board took a decision to make a foray into the intercity market, purchasing an A4 Pacific with a rake of 6 articulated coaches to make the journey between Oxford and Plymouth. 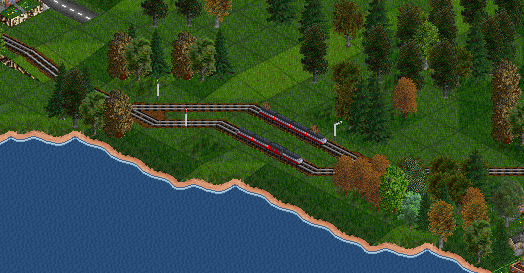 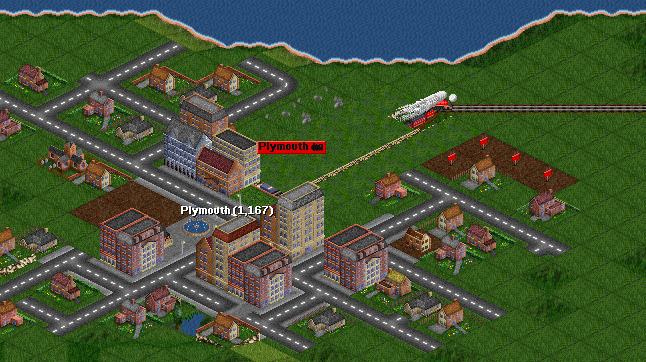 Since the route to Plymouth shared track with the DMUs between Oxford and Aberbourne, this part was dual-tracked. 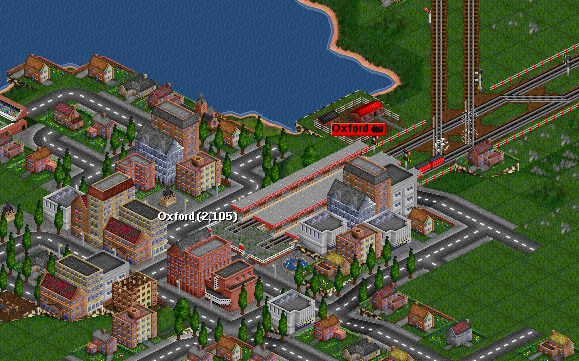 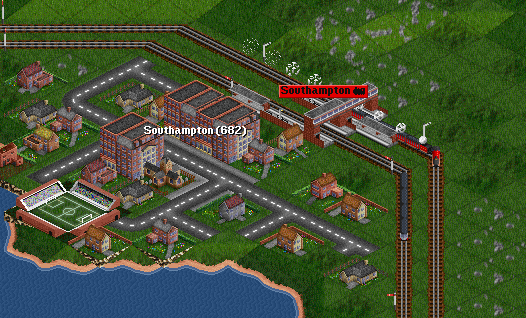 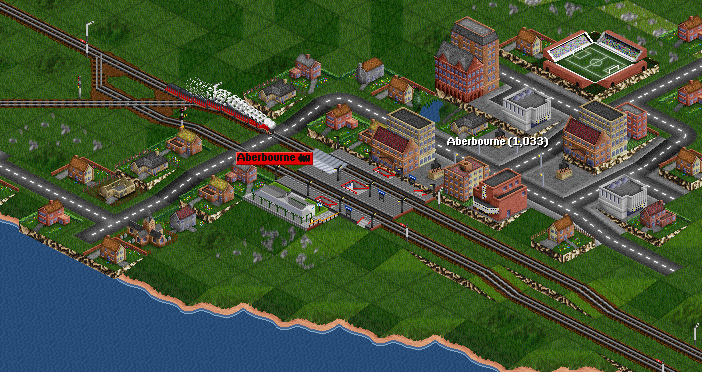 The new station at Aberbourne, and the Aberbourne North Junction, where the AEC DMUs split to the west to Crosby, and the new InterCity services continue north to Plymouth.
Oxford Transport, 03-08-1954.png (165.01 KiB) Viewed 8162 times 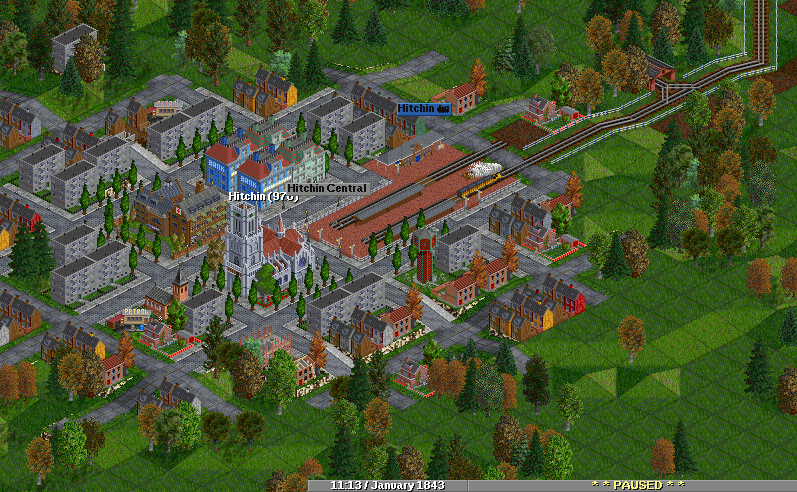 Hitchin station in 1843 - the station was built with two platforms in the hope that it would be a hub for services to eastern cities such as Kirkburton. The companies only locomotive, a 2-2-0 Planet, hauls a rake of four coaches towards Great Malvern. Hitchin is a large central city, whilst Great Malvern is a sizable town on the city's eastern outskirts.
Hamilton & Co., 12-01-1843.png (275.51 KiB) Viewed 7965 times 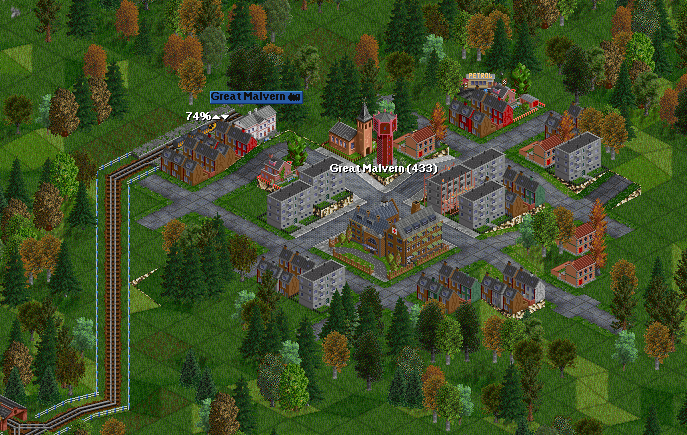 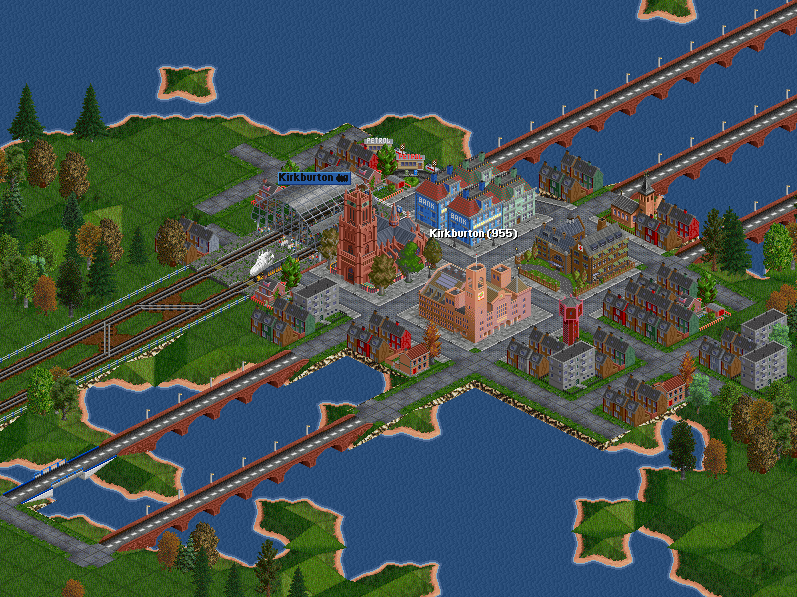 By 1844, the line had reached to the east coast and the city of Kirkburton, sandwiched between a lake and the sea. The tracks are in the process of being dualed in preparation for an increase in train frequency when Coppernobs are introduced on express trains, reaching speeds of 40mph.
Hitchin & Great Malvern, 12-01-1844.png (236.92 KiB) Viewed 7965 times 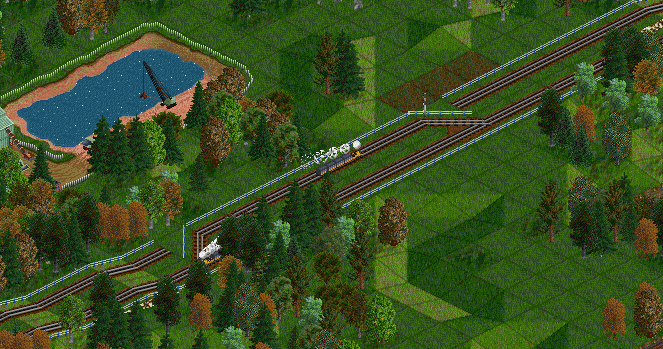 The two Planets pass each other in the open countryside between Gt. Malvern and Kirkburton. The double tracks are nearly complete, and just need to be extended to Hitchin and signalled.
Hitchin & Great Malvern, 16-02-1844.png (154.35 KiB) Viewed 7930 times

And in 1846 the new services had settled down. In this photo we see No. 3 descending the hill from Hitchin, hauling an express service to Kirkburton. No. 2 is in Platform 1 of Hitchin station, loading passengers for a slow service. Both of these are being hauled by 0-4-0 Coppernobs capable of 40mph.
Hitchin, Malvern & Kirkburton, 30-10-1846#1.png (105.39 KiB) Viewed 7930 times

A busy scene at Great Malvern - a slow service to Kirkburton is at P2 loading passengers, whilst the express service is held up at the signal beforehand as it was late leaving Hitchin due to a medical emergency. The slow service to Hitchin is passing both on the up line (up being towards Hitchin, the hometown of the railway).
Hitchin, Malvern & Kirkburton, 09-11-1846.png (240.18 KiB) Viewed 7930 times 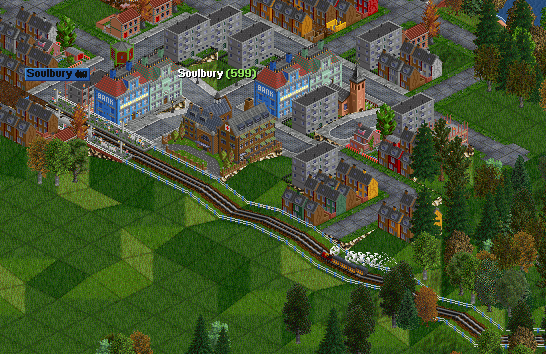 And the new station throat at Kirkburton. The lines to/from Hitchin come in from the west, and the single line to Soulbury leaves to the north. At the station we have No.1 arriving at P1, as the new service to Soulbury departs P2.
Hitchin, Malvern & Kirkburton, 30-10-1846.png (104.54 KiB) Viewed 7926 times

Yeah, it has panned out quite well

By 1847, the station at Kirkburton had been extended to 3 platforms in anticipation of an extension to services to Soulbury and possibly Egham. Hence the line to Soulbury has also been doubled and is now being operated by two trains to keep up with demand. In the shot is No. 6 departing to Soulbury, and the express arriving from Hitchin.
Hitchin, Malvern & Kirkburton, 11-10-1847#1.png (178.59 KiB) Viewed 7920 times

Hitchin, Malvern & Kirkburton, 11-10-1847#3.png
The residents of Hemingbrough had thought that the railway would be extended north-east to the peninsula town, however it was decided that a light rail service would be introduced, serving stops in Kirkburton...
(337.27 KiB) Downloaded 2 times 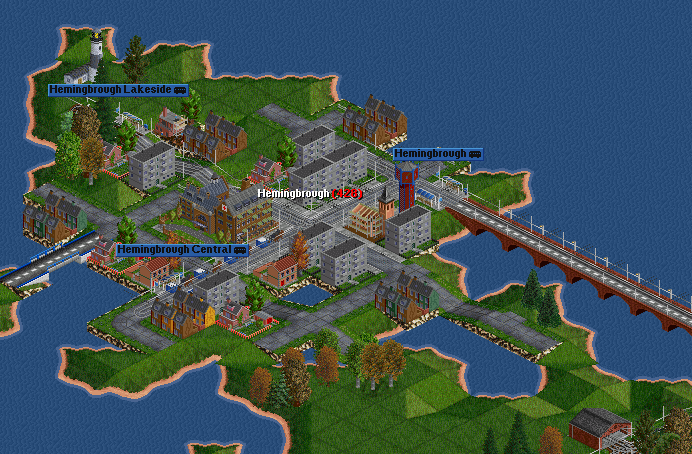 Which tram tracks are those in the shots? They don't seem to be the Standard ones.
POTM August 2012 Joint Winner
My Screenshot Thread
Top

A321Pilot wrote:Which tram tracks are those in the shots? They don't seem to be the Standard ones.

They're the light rail/tramtracks grf on bananas, which reminds me that I didn't turn the catenary off

A321Pilot wrote:Which tram tracks are those in the shots? They don't seem to be the Standard ones.

They're the light rail/tramtracks grf on bananas, which reminds me that I didn't turn the catenary off

Thanks, will remember that. Also the wires being on doesn't bother me, but might bother others. I was hoping however that you would reply and post another batch of screens.
POTM August 2012 Joint Winner
My Screenshot Thread
Top 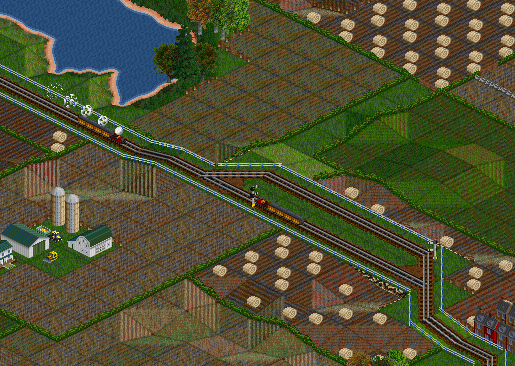 And by 1848, the Soulbury line had been extended to Hartlepool. In the countryside just north of Soulbury is the passing loop, where No. 6 is patiently waiting to pass the up service to Kirkburton.
Hitchin, Malvern & Kirkburton, 16-11-1848.png (106.32 KiB) Viewed 7914 times 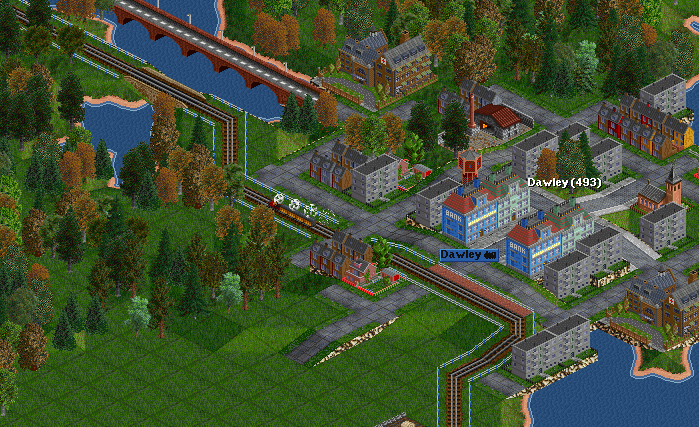 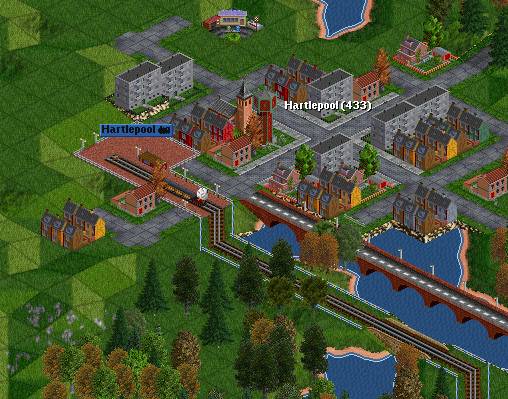 And a bit further along is the line's terminus, Hartlepool. No. 6 is just departing the station with a trainload of commuters on the up service to Kirkburton.
Hitchin, Malvern & Kirkburton, 25-10-1848.png (129.08 KiB) Viewed 7914 times

A321Pilot wrote:Thanks, will remember that. Also the wires being on doesn't bother me, but might bother others. I was hoping however that you would reply and post another batch of screens.

Haha, I think I pre-empted you on the more screenshots! And the wires bother me

, but I'm glad they don't bother you.

Just in case anybody was getting lost..