Screenshots of your games! All Transport Tycoon games acceptable (including TTDPatch and OpenTTD).
Post Reply
7 posts • Page 1 of 1

Okay, so while I have been playing OTTD for years, good rail design is still new to me. I thought I would develop a nice, efficient network on a fairly small map (256x512) and show you how I get on. The first pic, is a zoomed out view of my network so far, giving you a rough schematic of it.

Only one station is hidden, being just out of the upper right of the screen. 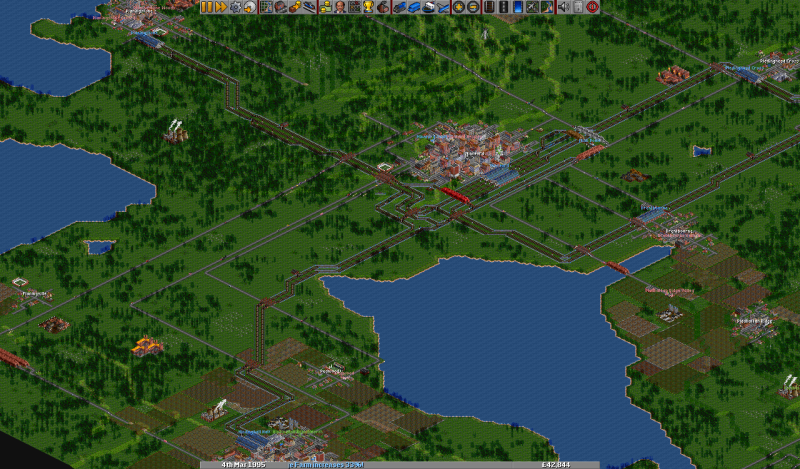 Zoomed out view of my fledgling network

In this second pic, I have taken a close up view of my only real junction so far. It is my cobbled together attempt at a safe four-way junction. Since I built the circular route first (served by a dash in either direction), I didn't want to add to the network at that point, rather than ripping up the track on the circular route. It took time for me to gain enough cash to add the junction (I am playing on Medium) so I had plenty of time to think about it. In time, I would like to give preference to the trains running on the Dindingstone - Ninnford - Nindinghall route. I am not sure how to do that though.

BTW, the isolated track to the right of the station is the track that allows trains to get back into the junction without having to go through the station again. It is a bit of a dogleg but it works. 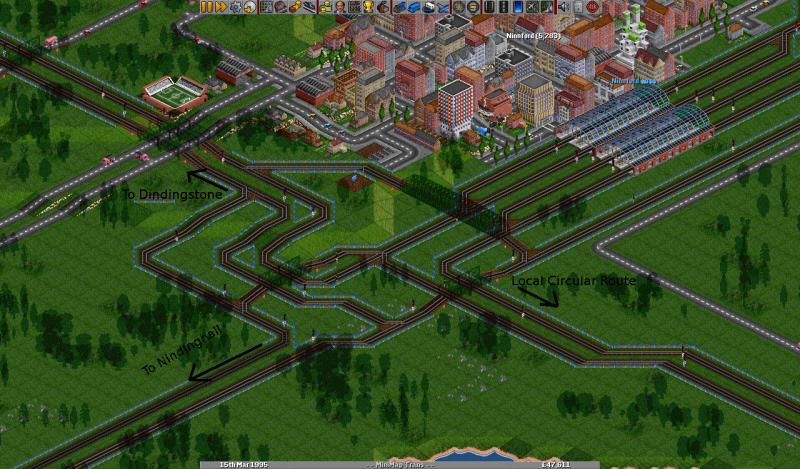 Well, here I am again. Today I have a mix of screenies to post. 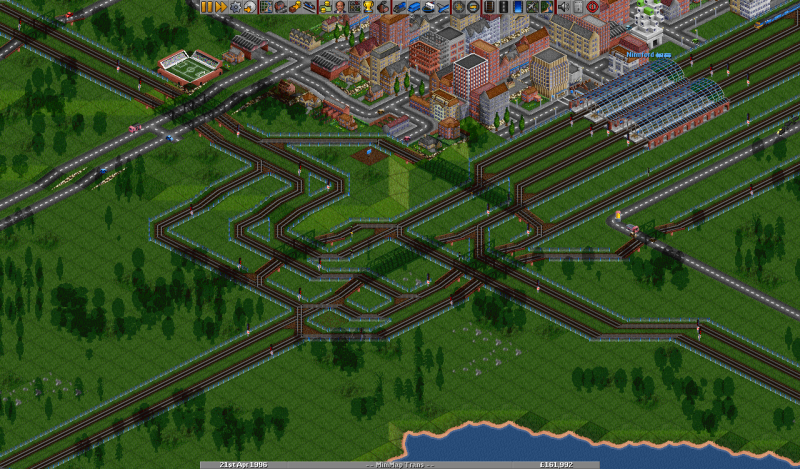 I don't really want my express trains to get access to the circular route so that is why the junction is skewed away from allowing that. Any ideas on giving the express trains priority?


Next up is a close up view of Ninnford, my busiest rail station, and its surrounding junctions. You can see an express train on one of the passing tracks, heading for a Southbound platform. I might end up improving this layout by blasting the bridges and running a single tunnel along most of the length of the passing tracks. The only problem with this would be signal distance. Any ideas of how I get around this? 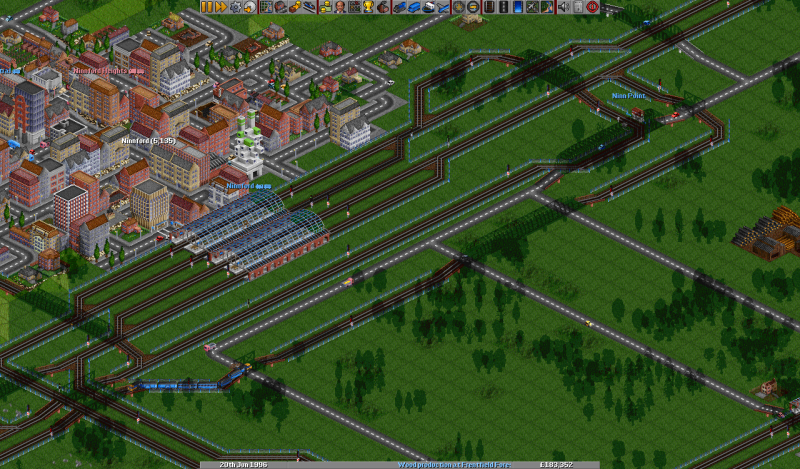 My next post will be dedicated to some AI silliness.
My Screenshot Thread
Top

looks pretty interesting, however the turns on your junctions are quite sharp and would drasticly decrease train speed.
I'm leaning on a lamp.
Top

Yeah, I have noticed that. I might try and increase junction size or something. I am trying to work out how to improve things for trains coming from the southern end. Apart from that, I would love help on the priorities thing.
My Screenshot Thread
Top

The promised AI silliness, with apologies to the author of NoCAB.

First off, when pathfinders go wrong! 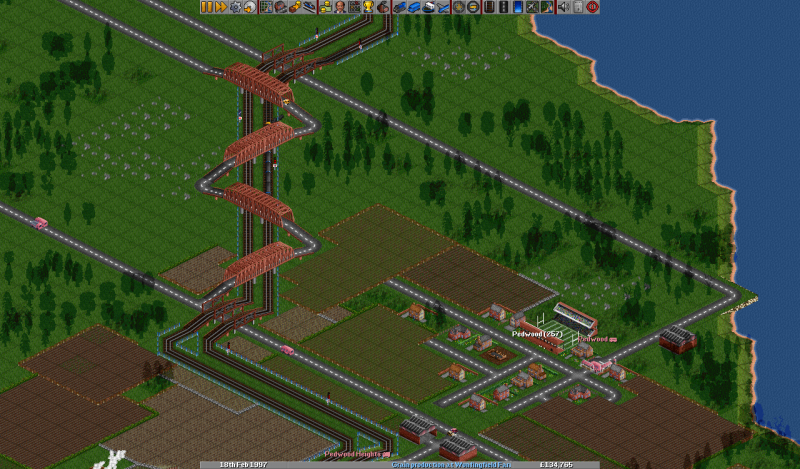 Next, a hom-ahge to the great British queue. 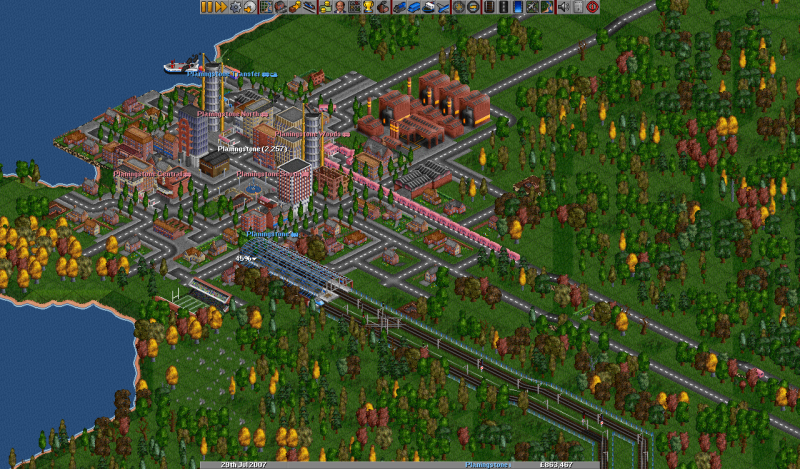 Last, a philosophical question, if you travel from three airports in the same town, do you get triple the luggage limit? 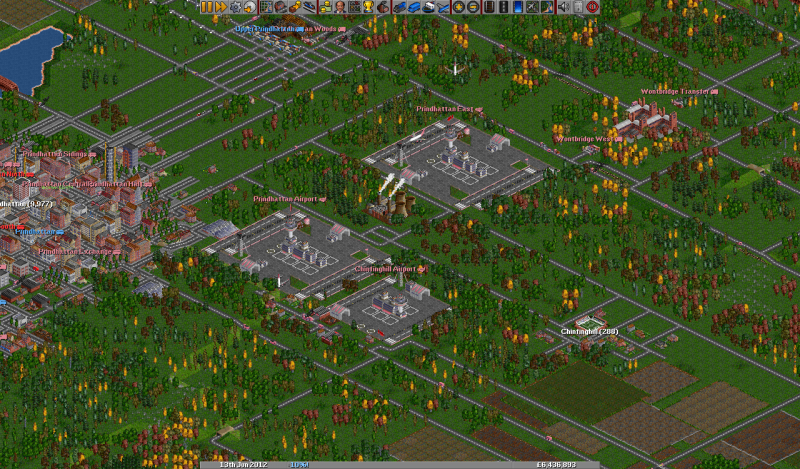 I am hoping that the 4 week rule doesn't apply to my own thread!

Here are some screenies from my latest game: this time on the Isle of Man scenario. I am trying to only use a mix of rail and light rail.

My first shot is of my attempt at a complex junction. You can see by the waypoints where my only freighter goes.

The second is posted for people to give me ideas. This station is in the busiest town on the map. As you can see, space is at a premium and my approach to it is, well, not too great. Anyone got any ideas for improving it within the limited space?

And here is a complex junction from my game on the Isle of Man map. Anyone have any ideas for speeding this up and adding a route from top left to bottom right?