Screenshots of your games! All Transport Tycoon games acceptable (including TTDPatch and OpenTTD).
Post Reply
94 posts

As the title says these screenshots are Epic. Please show us more

[quote="Emperor Jake
old-train.png
[/quote]
Just a question: how do you connect those two trains? I tried it, but I can't do it for which reason ever (maybe I'm just too stupid, what do I know...)
Top

Just a question: how do you connect those two trains? I tried it, but I can't do it for which reason ever (maybe I'm just too stupid, what do I know...)[/quote]
In the depot, you drag one locomotive to a position in the desired train. This is called multiheaded trains.
Like my avatar? See my screenshot thread
Top

You mean the Alco B-unit - I believe you have to flip the engine to turn it into a B-unit, unfortunately that isn't possible with newer OpenTTD versions until NARS is updated. However, due to the age of this game, I already own many flipped engines and I can clone them and they remain flipped

Current best hack for flipped engines: Start a game in an old version of OpenTTD (0.7 will work, not sure about 1.0), buy a heap of different engines, flip them. Then import the game into newer OTTD and clone them.

I have made a couple of videos of this map, I may upload them soon

Anyway, here are some more screenies of this map, just random ones...

The main station at Great Laketon, one of the biggest cities on the map. 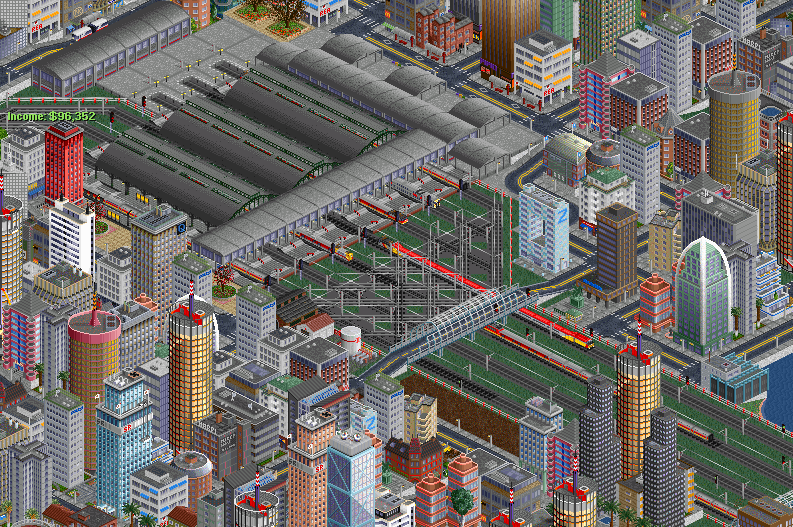 The old Union Station at Wroburgh. 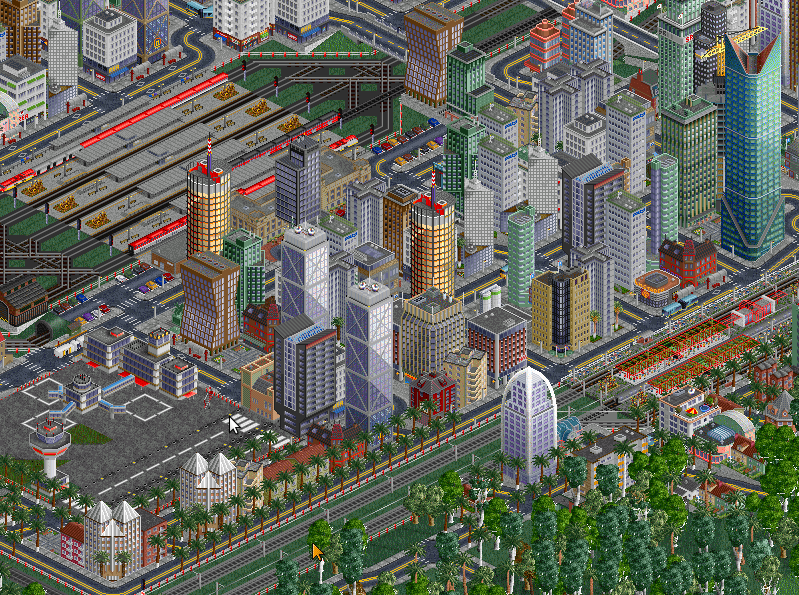 The shiny new Union Station at Wroburgh. The airport has been moved to the outskirts, and the separate High Speed station has been removed and the high speed trains now service the main station. 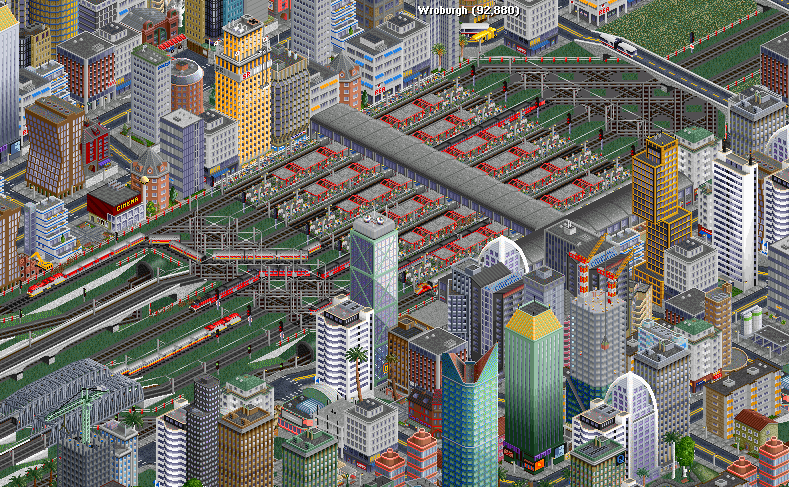 Tillyden in 1935. A local train from Main Town has just pulled into the station. 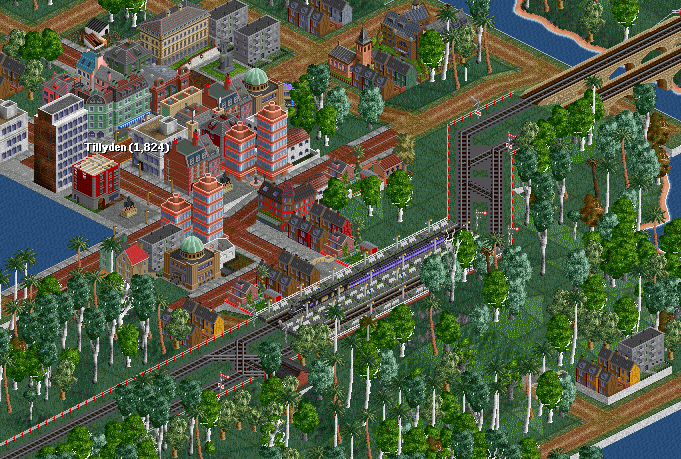 Tillyden in 2000. A local train from Main Town has just pulled into the station. This DC electric system was installed in Main Town's suburbs in the 1950s and was never extended beyond Tillyden. A Turbo Train in original green livery speeds through the bypass under the station. 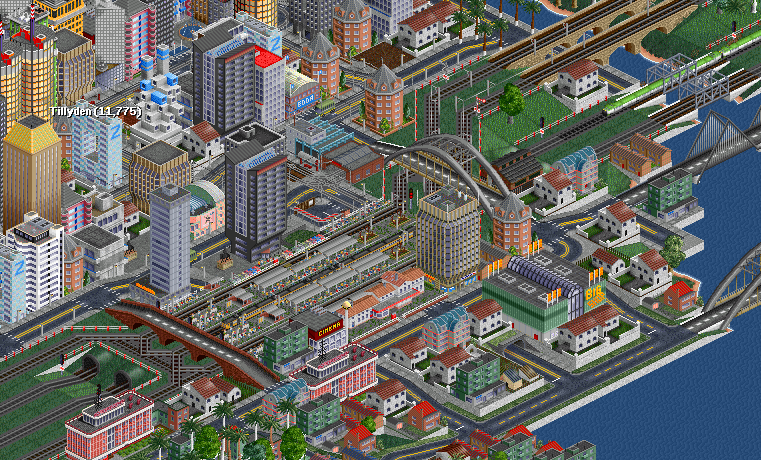 Tillyden in the present. The electric system has long been abandoned in favour of push-pull diesel trains of the type which operate in the whole northwest sector of the map. A Turbo Train can be seen on the bypass, probably the same one as in the 2000 screenshot. It is now in a red livery to match all the other trains. Some Costar Century fuel cell trains can also be seen, they are common on long distance services, especially to Main Town. And yes, the arch bidge and the semaphore signal are unchanged from 1935. 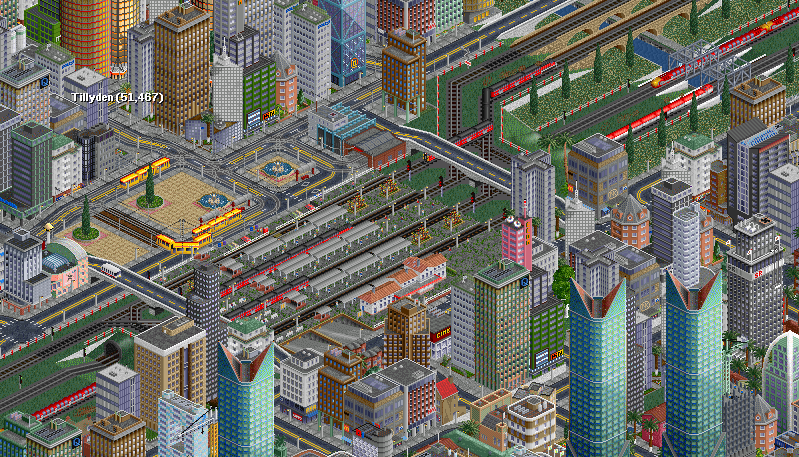 The most recent bridge built across the river near Tesdingwood. It carries several regional and intercity trains. The fact that there are passenger stations on both ends means it doesn't allow for freight trains; the freight traffic is mainly handled by the ships around here. 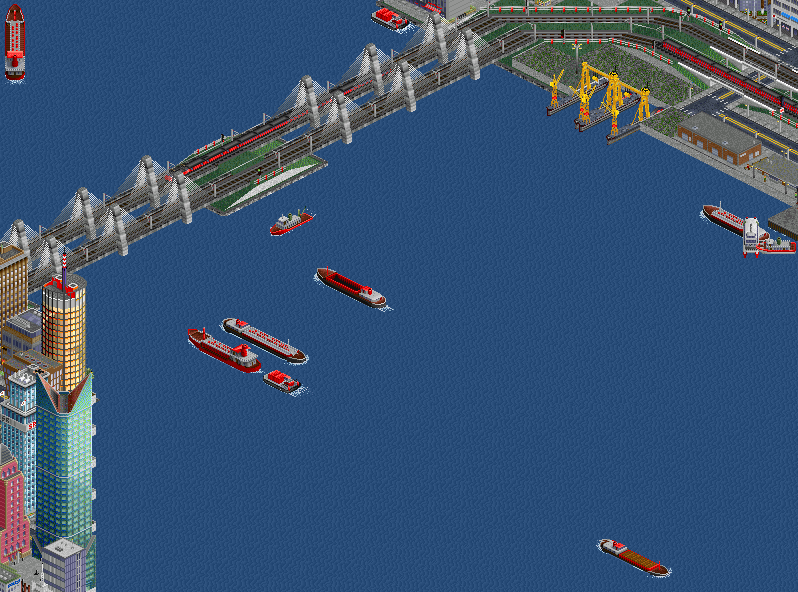 This town was originally called Chatwood, but I had to rename it Chatswood when I accidentally named a waypoint "Chatswood Bypass" 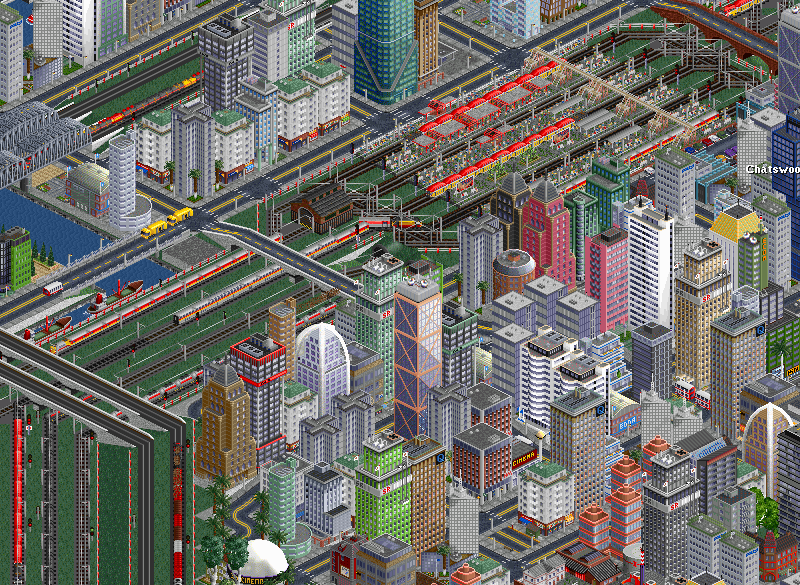 The town of Accpool and its large industrial area. The station serves the glass works and also as a transfer. The mine is the main source of iron ore for the Bradley's Green steelworks. 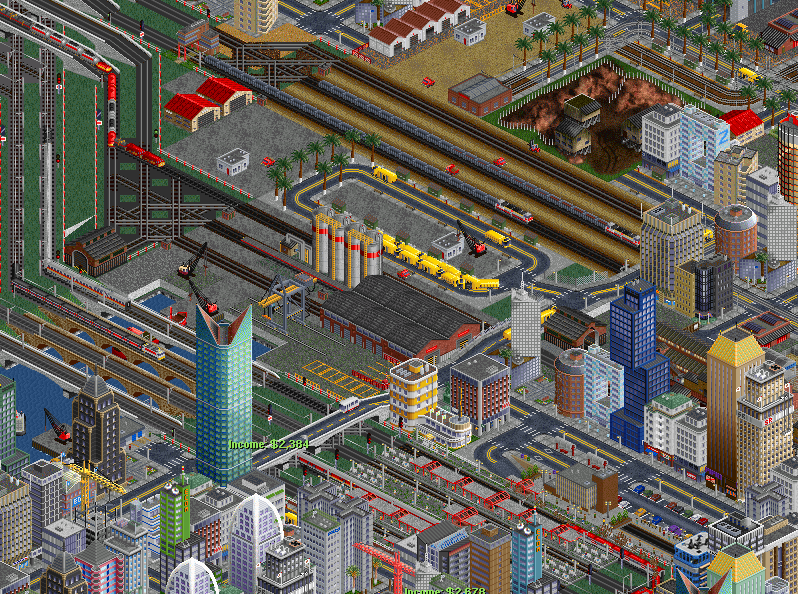 Thanks for the kind words. As a reward, here's the video I promised

This counts as 1000 screenshots, because, as they say, a video is worth a thousand pictures.

Song: "Oasis" from the SimCity 4 Soundtrack

Emperor Jake wrote:Thanks for the kind words. As a reward, here's the video I promised

This counts as 1000 screenshots, because, as they say, a video is worth a thousand pictures.

How do you make north america roads and Total Bridge replacement Compatible with each other?
Your Faithful Student, Twilight Sparkle.
____
Visit my screenshot thread

davidx123 wrote:How do you make north america roads and Total Bridge replacement Compatible with each other?

KUDOS on the video! Loved the music as well, great choice!

Thanks for the nice comments!

First, here's the northern part of the map, with the Main Town Terminus at the top, most of Main Town's suburbs visible. The Costar Hydra and Century trains have received a new black livery, and the company has renectly ordered several more to replace various older trains on long distance routes. A Hydra can be seen pulling into the Terminus in its shiny new black livery. In the bottom right is the first bridge built across the great river, and a nearby steel mill which was the first thing I connected on this map.

Next, this image is centered on the Whithead Refinery, the biggest freight station on the map. Many boats are visible on the river, and a long distance sleeper train hauled by a pair of Class 67s is about to cross the bridge near Tesdingwood. The town of Whithead is the northernmost end of electrification.

Finally, here is an image centered on Chatswood. Malbion Park, Bradley's Green and the small riverside town of Breams Island are also visible. The transfer station, Malbion Park South, is connected to the small freight station in the middle of Lenwich. This line was built to transport freight in place of a canal to connect the Lenwich canal with the Malbion Park canal without having to use the river which would have been a major detour. Die to the difficult landscape, a canal was impossible so this electric freight railway was built instead. The local passenger line was connected afterwards.


And remember, any requests of any place and time period (from 1935) are welcomed 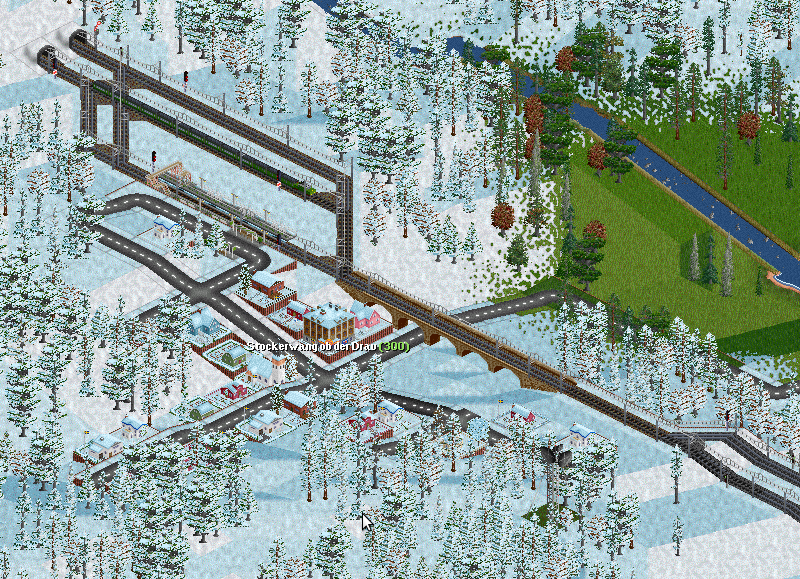 An express train hauled across the mountain pass by a Class 1020 passes a mountain village.
alpine1.png (606.31 KiB) Viewed 7432 times 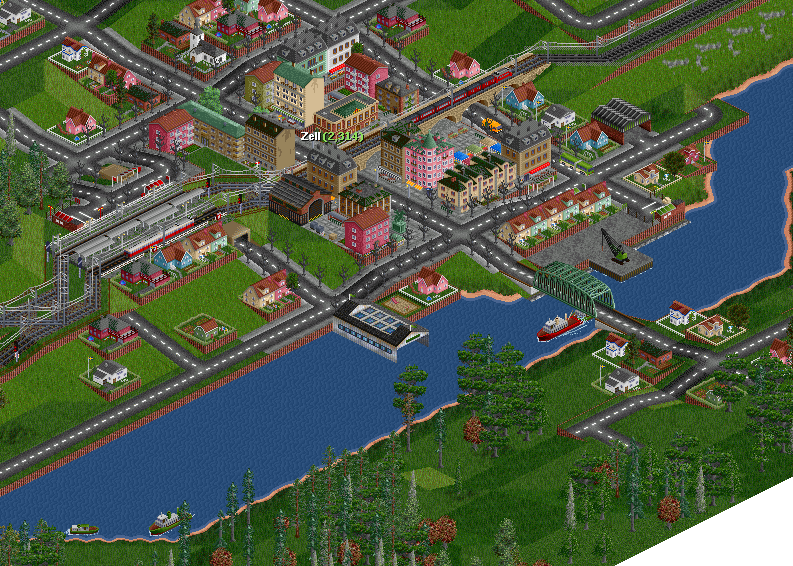 The riverside town of Zell. The express train trundles out of the town on the viaduct, while a local EMU waits at the station. Some boats, a bus and a mail truck can also be seen.
alpine2.png (676.03 KiB) Viewed 7432 times 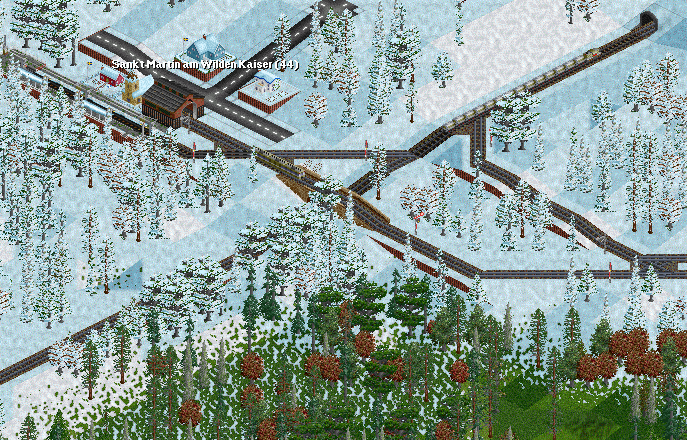 A small DMU pulls into the tiny mountain village while a diesel locomotive hauls a milk train from the valley up the mountain.
alpine3.png (429.82 KiB) Viewed 7432 times

The Talgo train is pushed and pulled by two F59PHIs, and the Superliner train is hauled by a pair of F40PHs. They have the same top speed of 177 km/h (110mph) but the lighter weight and tilting abilities of the Talgo cars mean that they must undoubtedly be the winners! Watch and find out the truth.

Great video! I watched both the original and yours and I must say that yours was the better of the two.

Love the videos and the big screenshots. Keep them coming!
Just because I'm a girl doesn't mean my CC has to be pink!

I now work for DE PHOTO - CLICK TO BOOK US TO SHOOT YOUR EVENT! We Shoot Kids with Canons!
Top
Post Reply
94 posts