Screenshots of your games! All Transport Tycoon games acceptable (including TTDPatch and OpenTTD).
Post Reply
168 posts

In terms of Freight only branches in this area there is a stub of the old Teign Valley line in Exeter which branches off after Exeter St Thomas station, there is the branch from Newton Abbot to Heathfield, which has logs carried from a station just south of the Teigngrace level crossing. There is the "Dartmoor Railway" which serves Meldon Quarry west of Okehampton with a branch to Crediton where it joins the Tarka line. In Cornwall there are a few which serve the china clay industries including Lostwithiel to Carne Point (near Fowey), from a China Clay mine near Luxulyan to Par Docks and from Parkandillack to a junction on the Cornish Main Line at Burngullow.

In terms of industries, the area North of Newton Abbot is filled with China Clay quarries and the area south with Sand/Aggregate quarries. Other than this, there aren't many large "industries" in the area, it is mainly farming, fishing and tourism. Newton Abbot itself has two largescale manufacturers: a large Yeo Valley food factory and Centrax, a company which produces parts for turbine englines (e.g. jet engines) and turns jet engines into power generators. I don't know how it would be classed, though.

Another industry I just thought of is a paper mill in the Exe valley north of Exeter near where the Exeter - London line meets the M5. Other industries which might not spring to mind straight away are the Gin Distillery in Plymouth, the Shipyard in Appledore, the Ginsters (Callington) and Ambrosia (Lifton) factories. As a side note, I find it funny how Ginsters advertises themselves as ridiculously Cornish, except that their main factory is only about 4 miles from the border with Devon, similarly Ambrosia's entire advertising campaign was "Only devon knows how it tastes so good" or something similar, however you could (and should) spit into Cornwall. the border is less than 1km from the factory. Maybe I'm just being a conspiracy theorist/need to get a life.

Anyone feel free to suggest an A to B for me to screenshot.

N.B. Ran out of room to show Penzance on the map but it is there and connected!

I really love the detail on this map. It is obvious how much time you have spent on it.

It has taken a while! I just hope my laptop can handle it when the map gets crowded - it is a 4000x4000 map after all!
Total Alpine Replacement Set: Industry, Town, Objects
Top

Oh! I just remembered you may need to add in a new station since it only opened during the summer. There is now a station at Greenway on the Paignton and Dartmouth line to serve Agatha Christie's estate. As a random irrelevant factoid, my mum grew up on a farm next to the estate, my grandad was Agatha Christie's milkman and my mum's best friend was the daughter of the estate gardener.

EXTspotter wrote:Oh! I just remembered you may need to add in a new station since it only opened during the summer. There is now a station at Greenway on the Paignton and Dartmouth line to serve Agatha Christie's estate. As a random irrelevant factoid, my mum grew up on a farm next to the estate, my grandad was Agatha Christie's milkman and my mum's best friend was the daughter of the estate gardener.

That's fascinating. I'll have to add that in!

SwissFan91 wrote:It has taken a while! I just hope my laptop can handle it when the map gets crowded - it is a 4000x4000 map after all!

Where can I find it?
Top

SwissFan91 wrote:It has taken a while! I just hope my laptop can handle it when the map gets crowded - it is a 4000x4000 map after all!

Where can I find it?

And would you believe, this map is still going! Here's the map so far:

I have recently had to completely remodel the Exeter region as I realised I had put it in the wrong place! A similar thing happened to Yeovil. Castle Cary and points along that line are still in the wrong place so that will be my next task! The West of England mainline has just been finished but is yet have any trains put on it. Having never been on it myself, can anyone shed any light on how the actual trains are made-up? I gather SWT use 159s and 158s on it. Are they mostly 3-car, 6-car or a real mixture?

so feel free to suggest anywhere to look at. Bear in mind that some places are just sidings that I haven't renamed (Yeovil Annexe, for example) so they are not much to look at nor are they real stations! Also, some are stations placed right on the edge of the map to make trains have the correct timetable (London Paddington, for example). These are clearly not in the confines of the map!
Total Alpine Replacement Set: Industry, Town, Objects
Top

West of England Mainline can be a mix, however the majority are 3 or 6 car. There is at least one down per day which is 5 as the 158 is on a day lease agreement to FGW, operating as part of a 5 car train, joining a 3-car FGW Paignton train at St Davids, going down to Paignton and back for the Torquay Grammar Schools service (which I used to take when it was a single 150/2 (proper wedged)). The 159 detatches again at Exeter, working up to Bristol and operating a couple of services there before working back down to Salisbury. Some of the services are also 158s, such as those which involve the peak Axminster services.

As for screenshots, just a variety would be nice...

Thanks! That was great, cheers.

Here we have the town of Colyton. Here, the Seaton Tramway starts on the track bed of the old London & South Western Railway branch line to Seaton. The track bed on the left of the screen runs towards Seaton Junction, a disused station on the West of England Main Line. 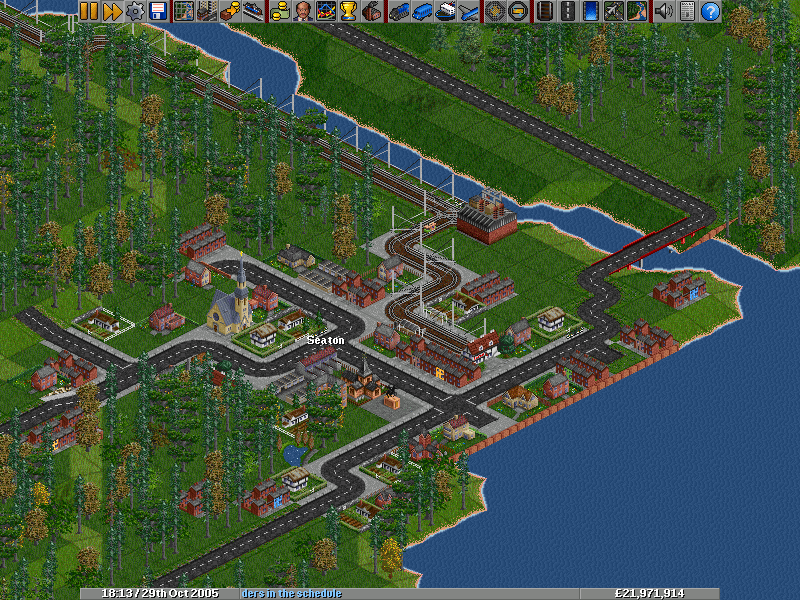 At the other end of the tramway we have Seaton. Pity about the huge catenary on the tram tracks!

Finally, something different. Exeter Central, complete with departure board showing the services I have implemented so far. A South West Trains service (yes, that's the best I could get their livery!) waits to depart for London Waterloo. Including a screenshot of the departure board really makes my story telling a lot shorter!
Total Alpine Replacement Set: Industry, Town, Objects
Top

SwissFan91 wrote:Pity about the huge catenary on the tram tracks!

Foobar made a thinner one, irrc

Invisibilize the catenary for the screenshot

The problem with this game is that I used a really old patchpack so I could have infrastructure sharing, bigger maps and more heightlevels. Therefore there are many more modern GRFs that can't be used which is a shame.

You should upgrade to Spring 2013 Patch Pack.

A couple more from our South West trains route: 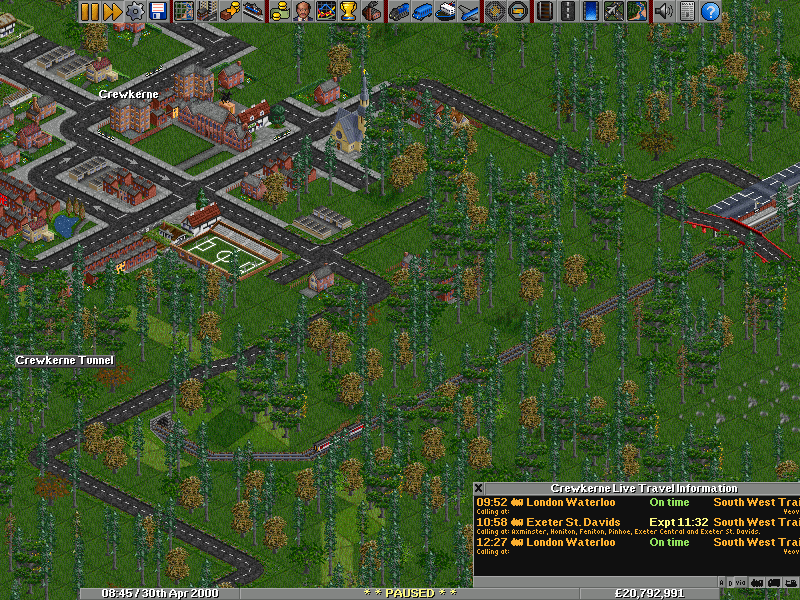 Crewkerne station complete with departure board and a train about to plunge into Crewkerne tunnel on its way to Exeter St Davids.
Network Rail, 30th Apr 2000.png (145.96 KiB) Viewed 4503 times 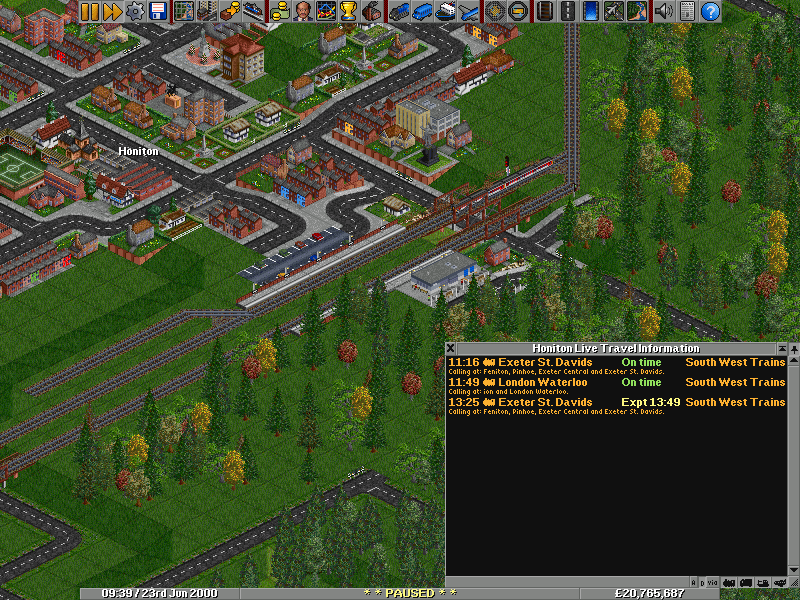 The map is coming along nicely..

I've started another game similar to the above South West scenario - this time the Thames area. It is a 2048x2048 map of the south east:

I am using the Spring PP so departure boards and infrastructure sharing are proving useful. Progress is slow but HS1 is fully operational from St Pancras to Folkestone (and on to 'Paris').

Let me know if you'd like to see the progress of anywhere!
Total Alpine Replacement Set: Industry, Town, Objects
Top

Today we're going to take a trip along with Bluebell Railway: 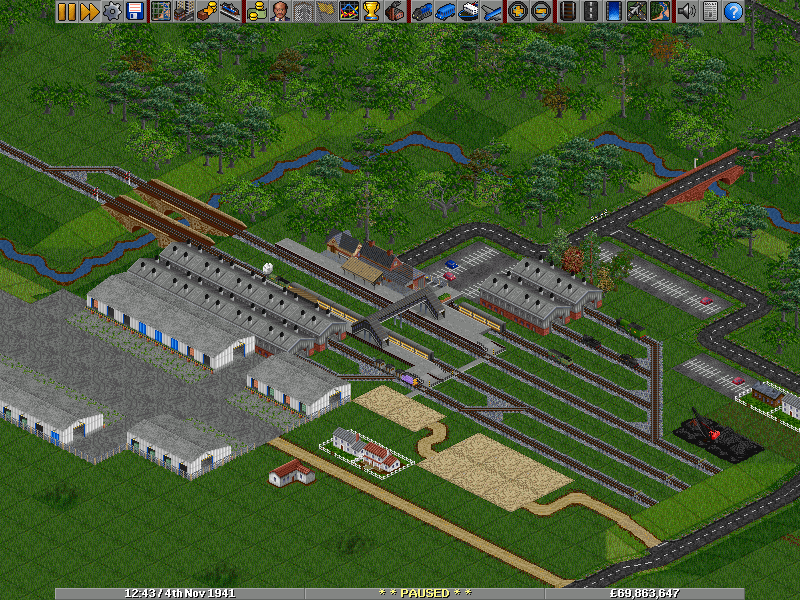 Currently the terminus of the Bluebell Railway, the London, Brighton and South Coast Railway (LB&SCR) used to continue southwards towards Lewes. Here we board 4-6-2 No 34059 Sir Archibald Sinclair pulling a summer service to East Grinstead.
Sheffield Park.png (218.49 KiB) Viewed 3116 times 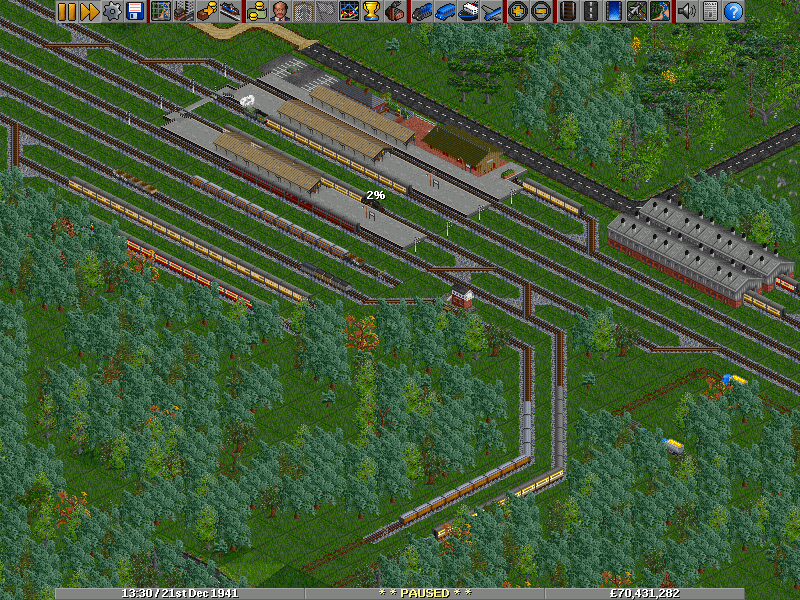 First we reach Horsted Keynes. Originally a junction station (with a LB&SCR branch running south and west towards Haywards Heath) the station is now home to the Bluebell Railway's carriage and wagon department. Here we pass 4-6-0 No 73082 Camelot with a service back to Sheffield Park.
Horsted Keynes.png (219.09 KiB) Viewed 3116 times

After the Sharpthorne Tunnel we pass the site of the original West Hoathly station. After closing in 1958 the site was used by contractors to bring in the equipment which demolished the line in the 1960s.
Sharpthorne.png (280 KiB) Viewed 3116 times