Screenshots of your games! All Transport Tycoon games acceptable (including TTDPatch and OpenTTD).
Post Reply
78 posts

petert wrote:Can we get a maximum emoticon limit?

I wish. Plus the Pictures he is commenting are over a year old.
Something goes here, hell if I know.
Top

but ill get over it

i feel bad for the people who crashed in trains

i bow to them

Hi! Please refrain from overusing emoticons, as it does make posts a little hard to read. One or two is a good thing, but if you have too many, it gets a bit messy! Still, good to see your passion for the game!
Posted by Raichase. Visit my Flickr! Gallery, Blog (get a feed of everyone at once at Planet TT-Forums).
Raichase - Perfect timing, all the time: [13:37] * Now talking in #tycoon

Check out some of my work
Top

Well................ It appears my computer screen is on the friz. When i play OTTD The brown ballast, looks green on mty screen. So there might not be any more pictures till I figure out the problem.
Something goes here, hell if I know.
Top 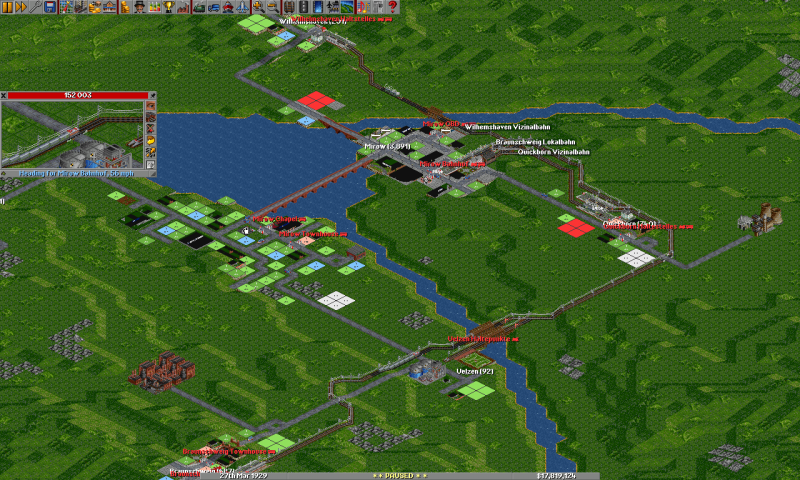 I'll Post some more latter if any one requested it. I'm here all week, Ya know!
Something goes here, hell if I know.
Top

Here are some SECRET pictures from my SECRET Game.
The German Rhine Bahn And the Prussia Mosel Bahn was the two most fierce railways in the country. The DRB Line was there first and had two elegance bridges. The Prussia Mosel Bahn then built a line under the bridges with a connecting line to the DRB main line. When the DRB and The PMB merged in 1960 to form the German Rhine and Mosel Bahn, the junction was deemed superfluous and would be downgraded. In the before picture A DRB Rhinegold train roars out of the shot while a small Railbus train(soon to be downgraded) pulls into Lubeck. A PMB Krokadile roars up the ramp to connect with the old belt railway of Mirow line.

My Golly, things has changed in just one year. Lubeck has been reduced to a terminal service by a railbus. and the elegance bridges have been removed. The new junction plays host to an F-Train heading for Flensburg Two Cities Bahnhof. My people are sad at the lost of the bridges that watched Lubeck for 30 glorious years. But Lubeck is still host to many steam trains. And as a mournful Steam whistle wails. The sound of clanking rods are now obvious. Then the railbus pulls in as we get on.

Next Up, Comm Cody covers the main freight yard of the DR&MB. 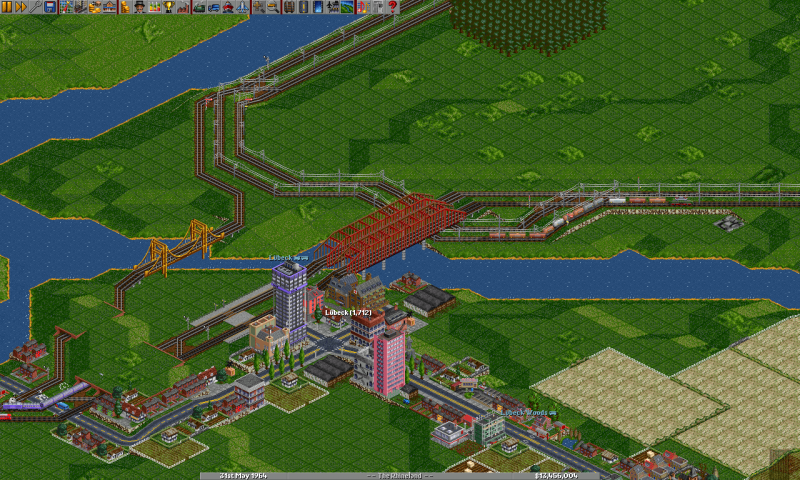 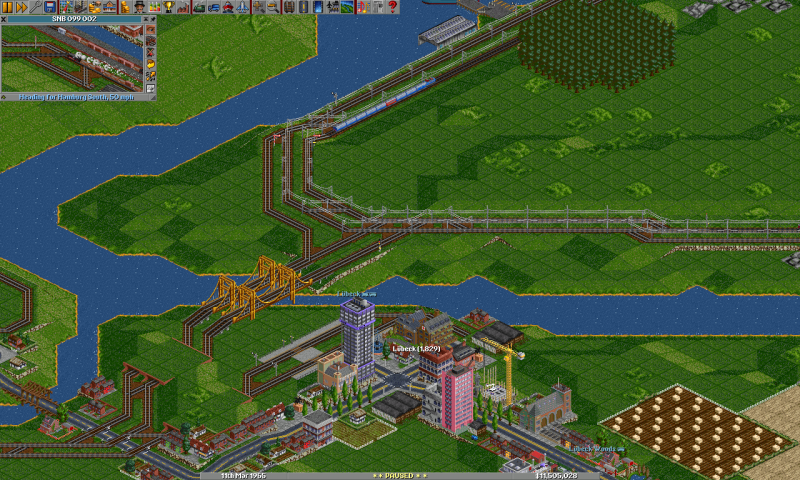 Okay First The pictures I'm posting are from the same game as above. But my save picks up in 1946.

For your convince, use this post as help to the Abbreviations I'll use.

PMB: Prussia Mosel Bahn. This was the first company and is exclusively electric powered.

DRB: Deuch Rhine Bhan. This was the second company and is all steam powered. (for now.)

BRoM: Belt Railway of Mirow. This is a holding company made by the PMB for it and any other company that wishes to use the trackage around Mirow. It extend from the Rhine River Bridge to the Danube Junction. This company owns all the station in it area.

SNB: Schwarzenbek Nord Bahn: An all narrow gauge company that focus on farms.

Edit. And a map.
Request what you want. Then I'll take pictures of the area and give background on it.

Today's Bump was Brought to you by Comm Cody Along with Snail In cooperation with Andythenorth and Pikkabird.

What you see is a quick Narrow Gauge network that I made. I focused on Passengers, but did have a Fish/Food Train.

Thanks to Snail for working on the French Narrow Gauge set and for allowing me to beta test.

Wow. It has been a while since I threw up some pictures of what I get up to.


You know, looking back, from 2008 up to now 2014, I have really changed in posting personality, for better. From an annoying eleven year old to a slightly less annoying seventeen year old.

This is Banff in 1937. In 1921, it was only 600 large. The Canadian Pacific and the Canadian National have led to it exploding in size. It is home to an oil transfer yard, a colliery, a food plant, and two stations. out of my 35 trains, 25 visit Banff or somewhere in the area.

I have more pictures, I just can't be bothered to put them up.
Something goes here, hell if I know.
Top

I have a map overview and a full map view.

If anyone wants to see a certain area, rolling stock, or how much red ink my trains produce, request it.

Couldn't start a game, so I downloaded Pikka's old Pineapple set/Aussie replacement and started a game.


Losing money like a sieve, but coal is saving me, and subsidizing the money loosing trucks, buses, and passenger trains.


First Picture is the convulted mess of my main base of operations. You can see the Power Plant that deals with six coal trains, you can see the freight/distribution yard of goods and food (Need to hook up fuel oil if I want the towns to grow. *grumble grumble*) and you can see two major stations in close proximity of each other.

Second Picture is the overview of my railline/road connections.

Third picture is where the money is lost at. I have three categories. Freight is obvious, Federally funded Passenger trains are money losers but needed to "ensure reasonable transportation service" and Non-federal passenger trains actually turn a profit, believe it or not. Not much, but it covers the running cost at least.

The AI has gone bankrupt ten times, it can't make money, and so can't I.

Oh, I remember that set. Where to get it? I like the extensive sidings.
Top

Well, that game is gone. Something something off to Uni, and the game was on my desktop.
Something goes here, hell if I know.
Top

Since I've gone off to University, I have found myself playing with JGR's patchpack quite often. One of the bigger draws of that patch pack is a very reasonably working infrastructure sharing patch. Being from the United States, it's almost unheard of for another company to NOT use other stations or infrastructure of a different company.

So I let the RNG of OTTD make me a map for the UKRS2 set and for Infrastructure Sharing.

There are six companies. I am controlling one, three, four and six. The other two are AIs from bananas.

Company one is the Southern Railway in bright blood red. Yeah, realism is out of the window here.

Company two is the Island Ministry of Transport (WmDOT, it builds roads if I give it money)
Company three is the Great Western Railway in a decentish dark green.
Company four is the Midland Railway in Dark blue.
Company five is AdmiralAI using only roads, because it botches trains and planes.
Company six is Caledonian Railway in grey. They haven't built anything yet.

I have plans to bring in two or three more railway companies to cover the rest of the map. Thinking about making a LNER-style company, a LB&S style company, and probably a Great Northern Railway style company.

Once I get the other few railways built up, then I will kick on the daylength patch and watch the beautiful chaos. Probably will use my Southern Railway company to buy out every other railway company and "nationalize" the railways, while leaving AdmiralAI alive to undercut me.

The Southern Railway, Mar 21st, 1923#2.png
God's Wonderful Railway, with very few trains in service at the moment.
(500.4 KiB) Not downloaded yet

And a picture of the trains of the three companies.

I've posted a few screenies relating to this game in the screenshot thread, thought I'd post some more here and bring this thread back to life.


So, what happens when you let an American, once who grew up with ideas of big, bulky, heavy drag freights, and tell him to play a Swiss based game?


You get these sort of monstrosities.

This is the biggest headache of my rail line. The coal mine, docks, Iron Ore transshipment, meat packing plant, and metal foundry are all TIGHTLY concentrated here. You want to talk realism, I'll listen, but with the amount of SLOW drag freights, I need the flying junctions, or else I'm going to get a major headache. I don't ever think I've designed a mess as bad as this. Not sure how to solve it.

A more, err, normal junction by my standards. Downward leads to the steelmill that all the coal and iron ore trains go to. Lower left leads to an iron ore mine, upper left leads to a small resort town that's a very major stop over for several steam and electric expresses, and upper leads to another monstrosity of a rail line.

The main city on the map. And yet another major mess. Notice the coal mine, those trains head to the yard in the first picture, notice the food trains, the fish boats, the sad S-Bahn, the two Bahnhofs, and my sanity slowly slipping away.
Something goes here, hell if I know.
Top

Don't be fooled, like half of those steam engines are laid up and not in service. I love steam, but they are pretty meh in the SBB set once you get the electrics.

granted, they're cheaper, and I'll probably commission a bunch back into service to haul clay to the main city port and to haul chemicals to the metal foundary.

Never sell your trains, keep them around until they blow up, then fix the boiler for another ten years.

Yellow is electric, grey is regular, and brown is abandoned/dirt trackbed.