Badger wrote:That is good, may have to borrow that idea!

As may I...
Posted by Raichase. Visit my Flickr! Gallery, Blog (get a feed of everyone at once at Planet TT-Forums).
Raichase - Perfect timing, all the time: [13:37] * Now talking in #tycoon

I've come to notice that it's a very small detail to make the whole station look a lot prettier and more incorporated. I haven't been playing much lately, running out of areas to expand into. I'll try to throw you some more before Mister 2010 arrives!

Bottom of page 1? Oh my! Plans to post new pictures before 2010? Oh my! At least I got here in time to salvage this sinking ship.

I've also added a routemap. Please request any interesting area - I've recently been working on re-designing the roads of cities and I've built roads between towns as well. Many towns have grown so that the station is situated in the middle, with the town growing percectly well around it. You could perhaps spot some in this routemap, the year is 1961. 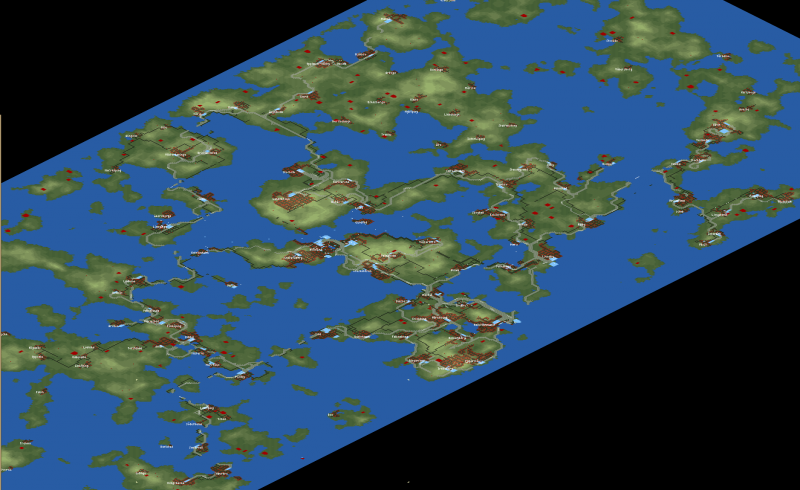 Keep 'em coming! What stations/bridges have you been using? Also where do you think buses or trams would be better?

Sorry about the questions, but I'm trying to learn to build better networks.
Top

Bridges, Total Bridge Renewal Set (I think it's called that...)

Buses and trams are more useful in city cores when not wanting to tear down houses, or in smaller towns where building trains is not suitable

Whenever you feel like. It's more of an eye-candy feature.. Then again, trams can hold more passengers but usually travels a bit slower - I never use them from city to city.

What are these trees that you use?
Top

What are these trees that you use?

I believe that is the stolentrees.grf.
Top

Chrill wrote:TTRS houses, era 1, spawns from 1920-1950. It's currently 1894. Since the Swedish houses can be built this early, they're the only ones actually being built, I guess. I love the looks of these towns with SweHouses though!!

As I posted my problem somewhere else on the forums, and it seems you made, what didn't work in my game: how did you get the second parameter (era) of TTRS running? Or did you leave it by default?

My problem is really annoying... but it devours me from the inside! Nevertheless thank you in advance.
Quintus.
Top

Also, if you force the area with parameters, you'll have to wait for those houses to start being built. Tear down a few other houses and wait

Finally, some new screenshots from Hawthorn & Co. Since we last visited you in 1961, not an extreme amount of things have happened. The year is 1981 and in the last 20 years, the emphasis has been on providing service by road or sea. To give you that in plain numbers, there are 321 road vehicles operating in 1981 whilst in 1961, that amount was 88.

There have been some rail-bound extensions, however. This routemap reveals those. Two new lines have been constructed, to connect the westernmost city of Göteborg (Gothenburg) with the mainline. One of them runs from Billdal to Göteborg, and one runs from Ljunginge via Västerhaninge to Göteborg. 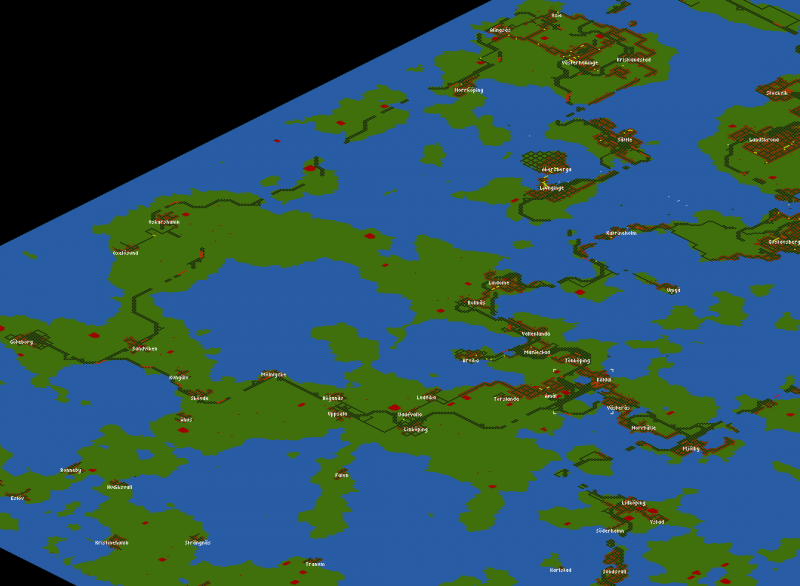 To give you an idea of how necessary those expansions were, the following two screenshots are of cities on the way from Ljunginge (slightly to the right in Routemap West) to Göteborg.

First up is Västerhaninge, where the new line leaves the mainline. The platforms in central Västerhaninge are newly built for this new line, whilst the smaller ones to the left hosts local trains: 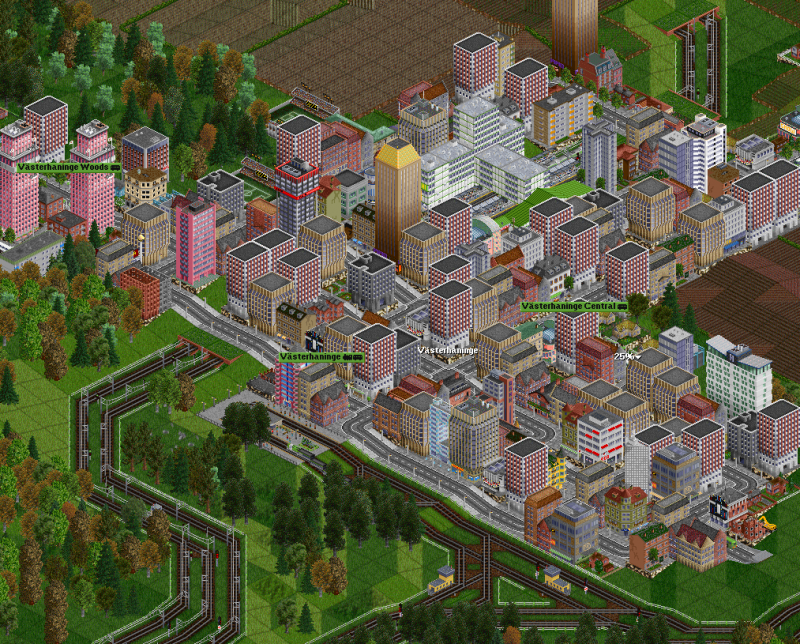 The second picture reveals Säffle, a town which started off quite small but has grown extremely much. It sees trains from pretty much everywhere arrive and depart, both locals and mainline trains. There are only 2 trains in this picture, but the station is often host to six trains at once: 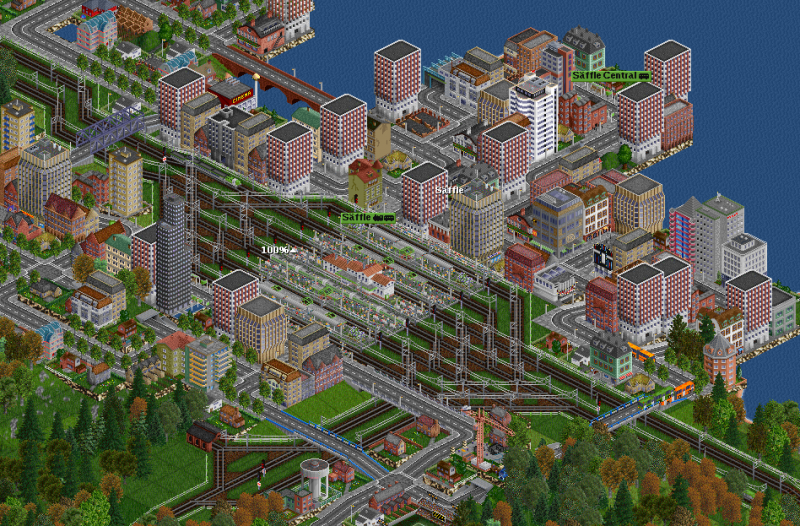 To continue the emphasis on Göteborg, here is a picture of the terminus station in the town itself. It plays host to nothing but electric trains, both the speedy Budd Metroliners and the EMD AEM-7 (both operating at the grand speed of 201kph). This particular screenshot, on a graphics-related note, is a perfect example of how pretty the Swedish Houses set can look in conjunction with other sets: 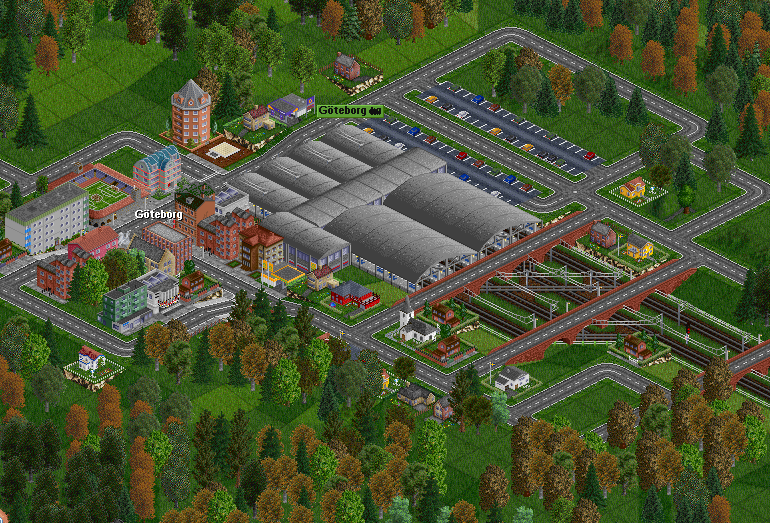 This screenshot does not show anything special, really. I just found it pretty. It shows the two towns of Uppsala and Höganäs on the line from Göteborg to Billdal. A bus feeder service is provided by the two Siccar buses.

To round things off, a screenshot of a smaller extension. Towns all along the mainline north of Billdal had way more passengers than our trains could handle. Two new platforms were built at Vallenlanda and you can actually see a DMU entering those platforms. In the tunnel, a TurboTrain passes by on its way north. 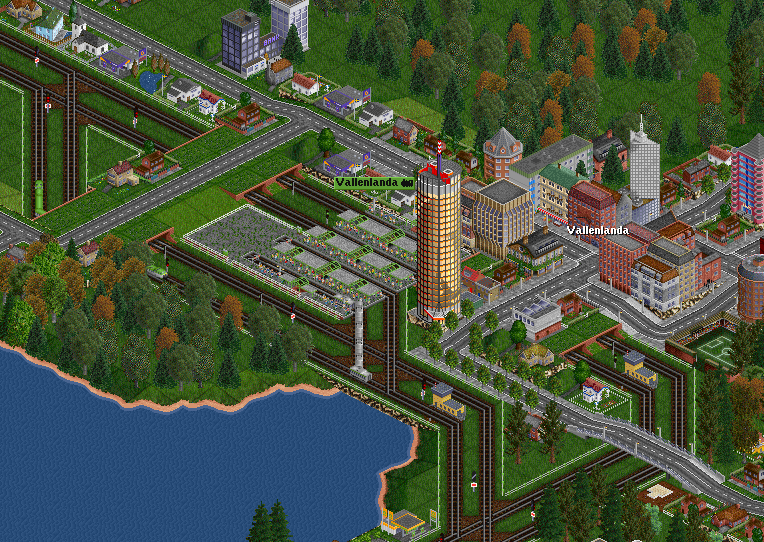 Please feel free to request screenshots. Most cities that I have shown before have grown a lot since they were last shown, and in many cases slightly rebuilt or expanded. I've heard many of you like screenshots of "Before and After" of cities, where an old and a new screenshot of the same area is put next to each other

Excellent shots matey. I've been meaning to play a map like that, but I've never got far.
My OpenTTD screenshot thread.

@ Nite Owl: It started with the through platforms and the bypass right next to it, but that's what happens with expansion. Stations often end up looking good if the cities they serve grow around them

EDIT: In 1946, this is what it looked like around Vallenlanda. It's similar, yet the picture from 1981 looks way better 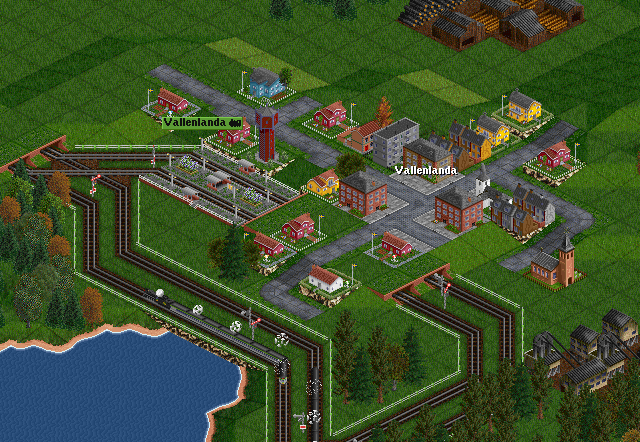 May I ask what settings you use to create a "nice" map? I am fiddling around with them but don't end up with suitable results.
Top
Post Reply
278 posts