Screenshots of your games! All Transport Tycoon games acceptable (including TTDPatch and OpenTTD).
Post Reply
52 posts

This thread shall showcase my sporadic adventures in the Land of OpenTTD.....land. I'm pretty sure this is my first screenshot thread, I'll have a look for any others in a minute, but anyway, be nice

Benshaw and South West
The year is 1930. The Great Depression is in full swing, but in this neck of the woods, the weather's too good for anyone to care. It's kind of like Pleasantville, only without Reese Witherspoon and Spiderman.

The year also saw the establishment of Benshaw and South West, a rail company headed by Mr Ted Curmudgeon. Here he is:

And here is the curiously Spain-shaped peninsula on which his early building efforts will focus. One of them there giant screenshots, and I totally didn't steal the idea off Ameecher. Note Benshaw in the top right, which is what I'd call North but what lots of you lot seem to call East. It's North

The first order of business would be to build a railway line from Benshaw to Genport in the South, with provision for future stations at all towns along the route. So, here's a look at the first station, Benshaw Central:

Just a modest couple of platforms for now, but plans later on would call for a much larger terminus...
Last edited by beeb375 on 27 Apr 2009 17:40, edited 7 times in total.
“Blackmail is such an ugly word. I prefer extortion. The ‘x’ makes it sound cool.”
Top

At the other end of the line lies Genport, a bustling coastal town desperately in need of a fast link to Benshaw. So, that's just what Mr Curmudgeon gave them.

Genport in May 1931, the express from Benshaw has just arrived into platform 2, rather inconveniently:

Next time we'll take a look at Avonstoke, Chadburg and Whitbridge, the 3 towns along the line, once things there are a little less sleepy.
“Blackmail is such an ugly word. I prefer extortion. The ‘x’ makes it sound cool.”
Top

Looks nice, the map looks to have a lot of potential. I do like how the openttd map generator does create nice smooth landscapes, TTDP is better for rugged mountain lanscapes though

You'll need signals at the stations though

Pfft, my mighty one train operation needs no signals!

All in time my friend, all in time...
“Blackmail is such an ugly word. I prefer extortion. The ‘x’ makes it sound cool.”
Top

Looks promising, I shall be watching

I agree with above, lots of potential here. What you've shown us ticks boxes with me; well cropped pics, buffers at stations, use of non-track tiles such as station buildings... check. I'm looking forward to seeing some more.

Well, OTTD can produce rugged as well, I guess many people dont use the highest setting though. I keep meaning to do a mountainous US/Canadian but I just haven't had the time recently.

. I also miss the signals though, stations look kind of plain without them.

You should still be able to switch back to the old landscape generator in OTTD. Well, it was possible the last time that I checked.
Don't panic - My YouTube channel - Follow me on twitter (@XeryusTC) - Play Tribes: Ascend - Tired of Dropbox? Try SpiderOak (use this link and we both get 1GB extra space)

Don't worry about signals etc., those pics were taken with one train running on the line so I hadn't put them in yet, when I get time to update, maybe tonight or tomorrow morning, you'll see things get a wee bit more interesting.

Oh, and cheers for all the comments

At last! I've had enough of learning the intricacies of tariffs and exchange rates for tonight, so as promised, here's a decent load of new screens for you

Come 1932, B&SW had enough money to expand their operation, and started a new local service from Benshaw calling at Avonstoke and Chadburg, two towns currently bypassed by the Genport express. Although only a local service, the company decided that the reasonable distance involved, and the importance of not holding up the express, warranted the purchase of another 0-6-0 Pannier Tank with the same 60mph top speed as the express. Teamed with three passenger coaches (no riding in the coal tender for this lot), the train would operate an important new transport link for the region.

Here we see our shiny new locomotive and carriages in B&SW's standard green livery loading up at Benshaw. With two trains now sharing the same tracks, Father Ted (as some overly keen citizens had dubbed the company's president) decided it would be best to install some signals, to prevent his trains becoming slightly crashed. Note also the bus leaving the station, heading to the other end of town. 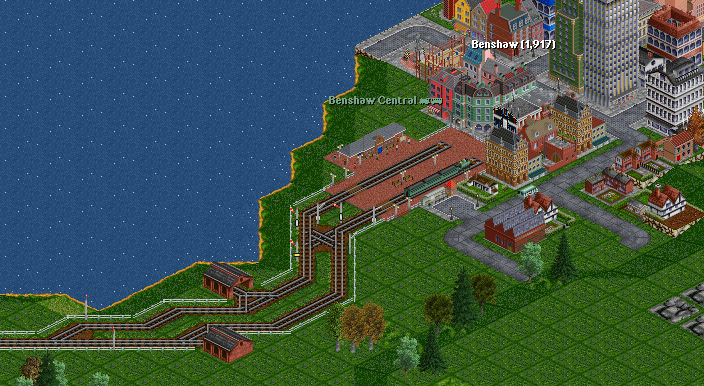 As the train potters down the coast, the happy town of Avonstoke comes into view, as well as the express heading back from Genport. Don't worry though, Ted also remembered to tell his train drivers what the signals meant, so the express will wait patiently for our train to pass. B&SW's bus operation has spread here too, a bus can be seen loading by the waterside at Avonstoke Bay.

Having exchanged some passengers at Avonstoke, the train heads away from the coast to the rural heartland of the peninsula. Chadburg is the last stop on this short route, and where the train leaves the Genport main line. Plans for the near future include introducing another train to shuttle back and forth between Benshaw and Avonstoke to satisfy demand. 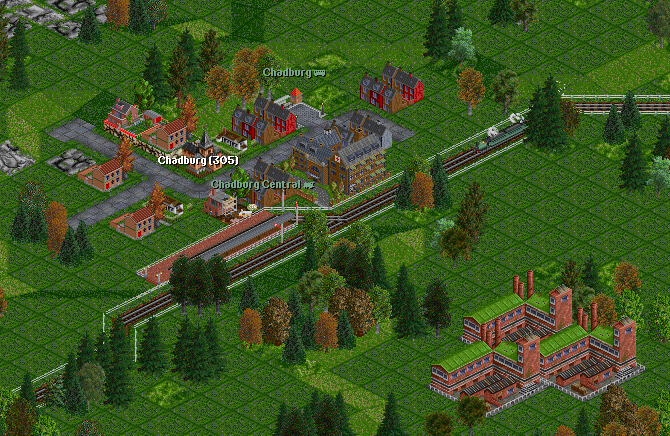 A short third platform has been added at Genport to accomodate the new Railcar purchased for the short run to Whitbridge. Absurdly, the railcar is the fastest train on the network, with a top speed of 70mph, but is extremely cheap to run, the main reason for its purchase.

The line has been dualled a short way out of the station, however, the plans weren't checked particularly well. As the keen eyed among you will surely have noticed (probably fellow OTTD players used to having no PBS), any train queueing at the pre-signal would prevent others leaving

. Still, in the ten years it took for this to be fixed, it never caused any problems, since no more than two trains ever used the station. 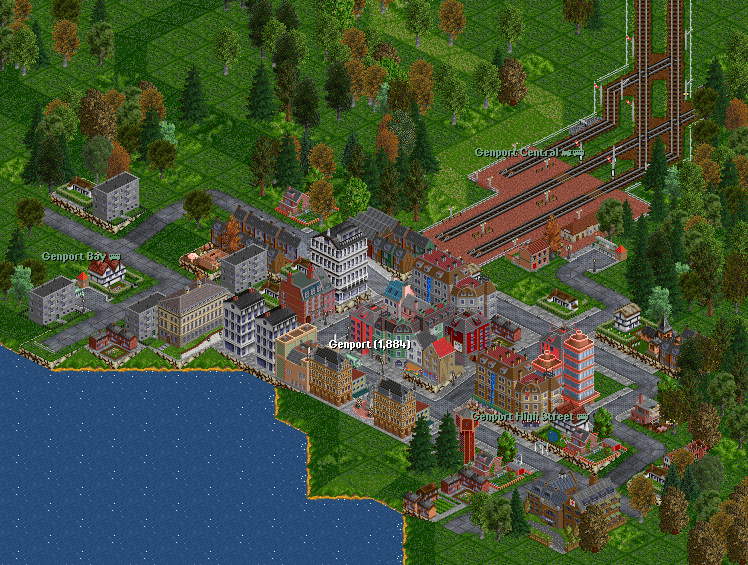 Here the railcar can be seen at the other end of its short route, loading up in the village of Whitbridge. Here men are real men, who spend their days cutting down real trees and drinking real goats' urine in the pub, or so the Genport-ians say. 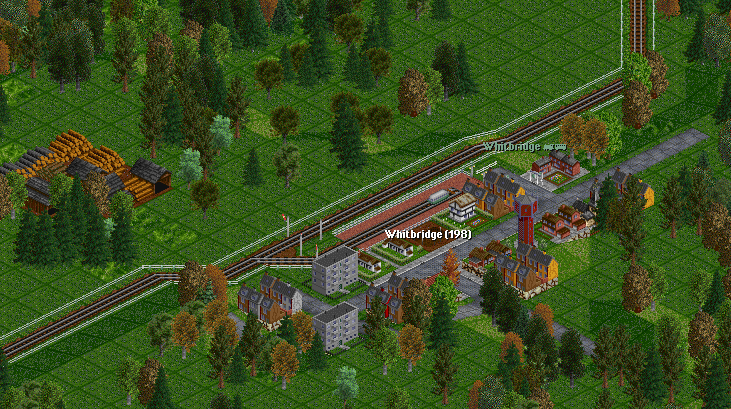 That's about enough for now, the year is 1935-ish in case you were wondering. I say -ish because all these screens are from older saved game versions, means I don't have to play for hours during exams whenever I want to post new screens

So don't worry, there's plenty more to come yet

I can see you're going to have issues should you need to make the main station larger? Crammed into a small space between the sea and the town. You're a bit buggered there!

Ah no no no, look at all the space to the bottom right of the station (I assume you mean Benshaw), that road gets blocked off and a couple of buildings get 'relocated' and voila, a 7 platform station. Speaking of which, here's a sneak preview of 40 years into the future to keep you all interested 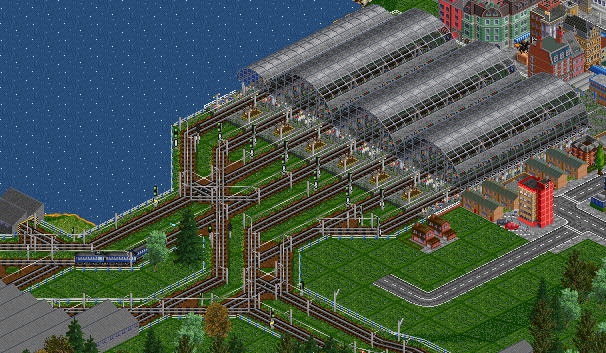 “Blackmail is such an ugly word. I prefer extortion. The ‘x’ makes it sound cool.”
Top

A very brave design considering you have no PBS. Very nice indeed

No PBS since it's OTTD... Shame, though I myself make stations like that as well.

*/me should make an epic game with UKRS and ECS soon too*
Retired JapanSet developer and creator of TIAS.
Top

Ah well I didn't want to give away too much, but suffice to say, there's 5 expresses terminating there, along with a few local services running in and out, we just caught it at a quiet time.

Thanks for the comments, as for lack of PBS, I've just noticed that I can move the platform signals on the fourth and fifth platforms from the sea a few squares forward to make it all a bit quicker, but other than that it works like a charm. And they're your depots, right Gavin? They look very good indeed, cheers

We'll be returning to the 1940's in the next load of shots to focus on the construction of a new mainline out to the east, which is the one that uses those rightmost three platforms. We might also have a look at the local line to the north of Benshaw.
“Blackmail is such an ugly word. I prefer extortion. The ‘x’ makes it sound cool.”
Top

beeb375 wrote:Ah well I didn't want to give away too much, but suffice to say, there's 5 expresses terminating there, along with a few local services running in and out, we just caught it at a quiet time.

Thanks for the comments, as for lack of PBS, I've just noticed that I can move the platform signals on the fourth and fifth platforms from the sea a few squares forward to make it all a bit quicker, but other than that it works like a charm. And they're your depots, right Gavin? They look very good indeed, cheers

We'll be returning to the 1940's in the next load of shots to focus on the construction of a new mainline out to the east, which is the one that uses those rightmost three platforms. We might also have a look at the local line to the north of Benshaw.

Hello again, it's time for some more pictures to be pulled from B&SW's aerial photography archive. The year is 1948, and passenger numbers are booming. Here we see Benshaw's expanded Central station and the newly constructed Benshaw North, which lies on the new local line from Whitton.

The new line passing to the north, and the line served by Central's new platforms, both head to the town of Sunleigh, shown below. It was decided that Sunleigh would serve as the junction between the two planned mainlines to the East, and so a large station would be needed. An area of land on the edge of town was purchased from a local farm and work began on the single biggest construction project in the company's history. The result was a four-platform station (which would later have a fifth added) and an equal number of tunnels underneath one of the town's main roads, leading to a large junction on the oher side. 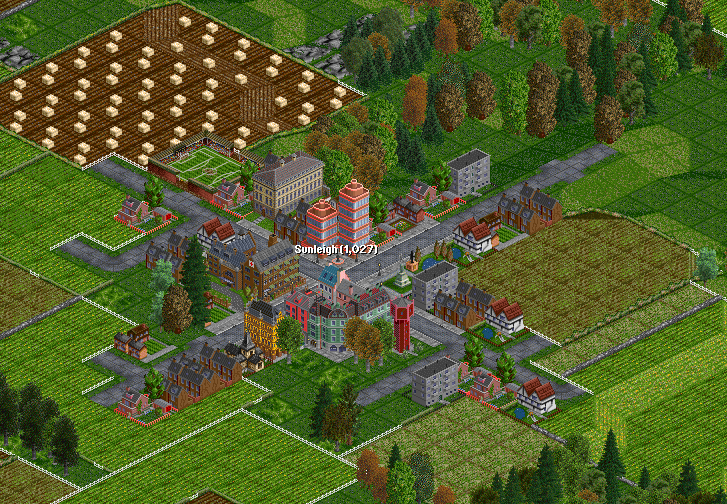 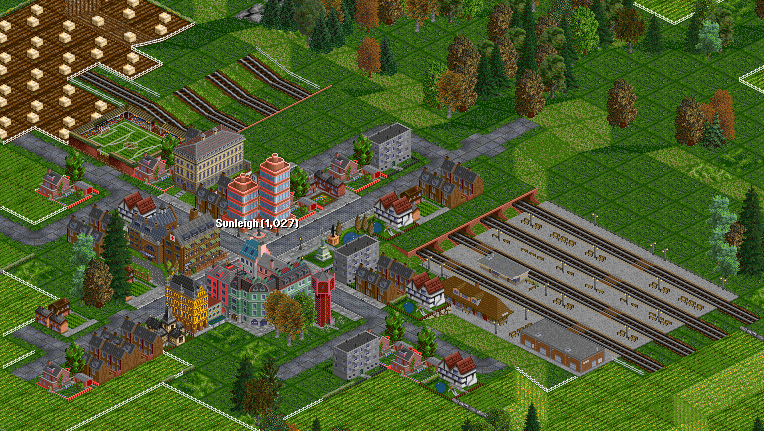