Screenshots of your games! All Transport Tycoon games acceptable (including TTDPatch and OpenTTD).
Post Reply
23 posts

Trying to create a screenshot thread, like Raichase's (inspired by him, but he's much better). I decided this seven years after the start of the game, so let's give an overview of my little network:

[1937overview]
Overview picture of the network until now. The lines disappearing on the right connect to a power station/steel mill.
I started with BR38 steam locomotives.
The first line was the short oil service in the lower-left part of the overview (Rufingbridge, will be renamed to Slochteren). Next, the oil wells on the top were connected.
Some time later I built a single, short iron ore line to this steel mill. Next the two coal mines were connected to the power station next to the steel mill.
I also started a bus line somewhere else.


[1937jul-cut]
I just cheated my railroads to electrified (I have cheatcost on, I choose this feature because it's less time consuming than manually converting tracks. Also, I always forget some spots), and built a simple junction connecting the oil wells to the 'main line' with the farm products. 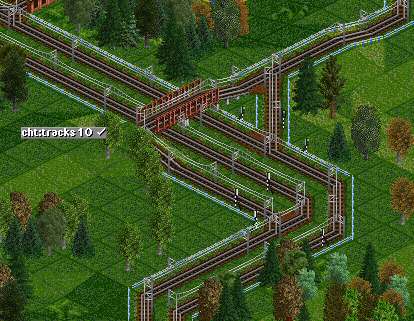 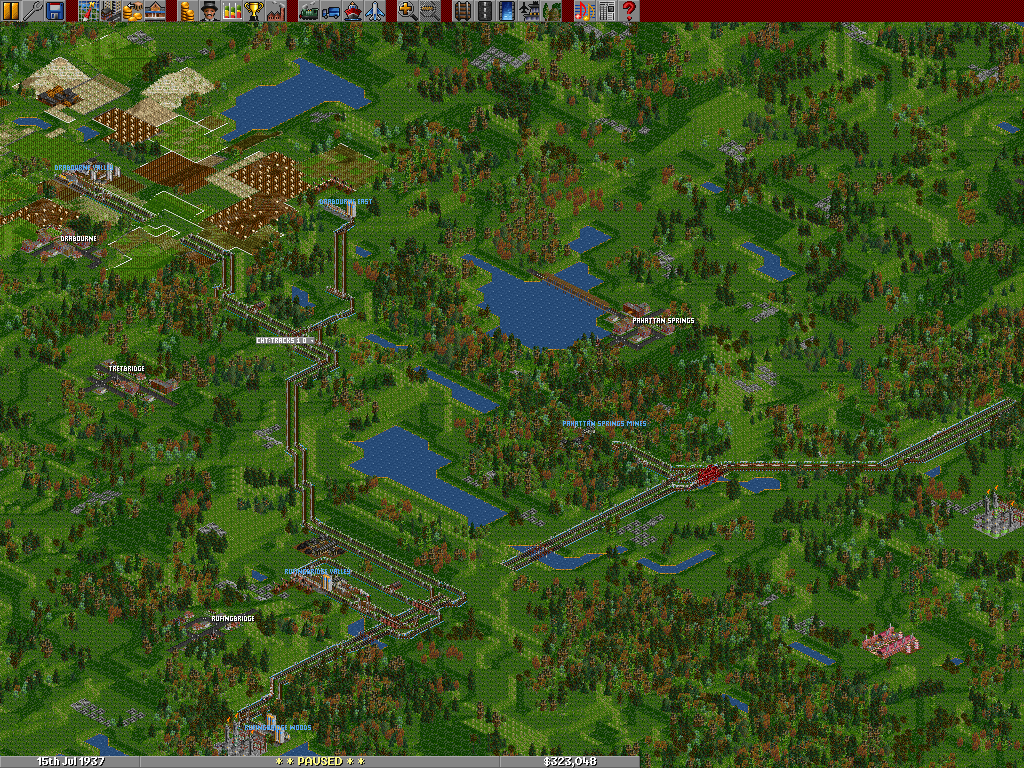 August 1937
Since we have electric railways, we can build electric trains that are actually worse than steam (or diesel), but their running costs are lower. I buy one electric loco to pull a livestock train so your beef won't smell like coal or diesel. For the grain I use a diesel loco, because it's faster. Still, it only goes as fast as the BR38. The line to the food plant is not shown.

[1937okt]
The first trains have not even left their platforms when insects visit our farm, decreasing the production.

I like straight, 90 degree networks, so I'm going to straighten the line from the farm to the food plant. 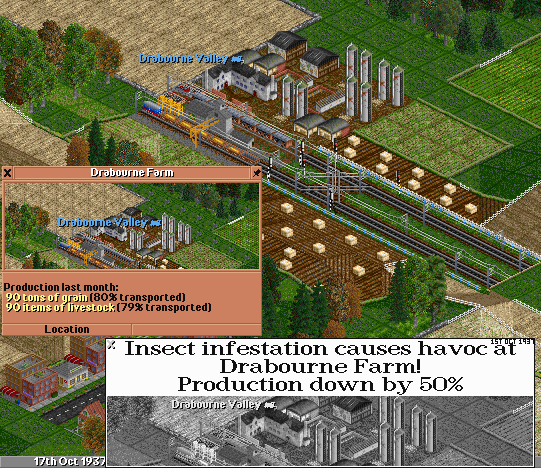 By novemer 1940, the line from the farm is straightened towards the food processing plant, resulting in a nice four-way junction.
The lines are connected in this way:
Upper left goes to the farm. Bottom right to the food plant, upper right to the power station, lower left to our second coal mine (near Slochteren, formerly known as Rufingbridge).
By now, I'm replacing my BR38's with BR01's, and I also own a BR116 elektro locomotive (I replaced the slow livestock loco with this one), just to make sure our catenary won't become rusty. 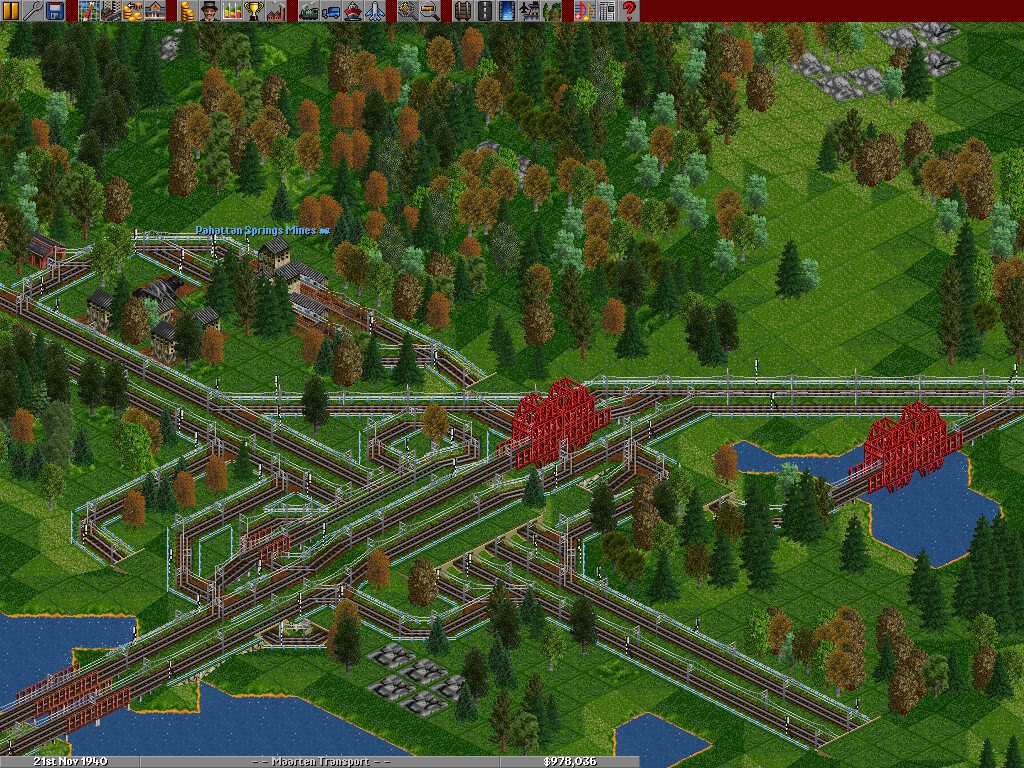 [1940rijssenstation]
I've just built a new station next to the bus stop, the signals are not yet installed and the citizens still have to watch big amounts of dirt.
People gather at the platforms, but no passenger train is planned: the station is built to deliver food to rijssen.

[holtenfoodstation]
I bought a short food train, just in time: soon after his arrival the grain train appears, followed by the livestock. Since there is only one farm connected with a low output, this short train should be sufficient. 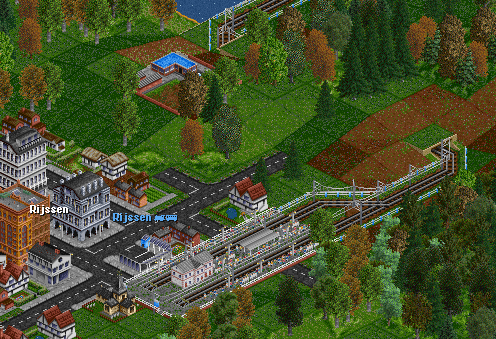 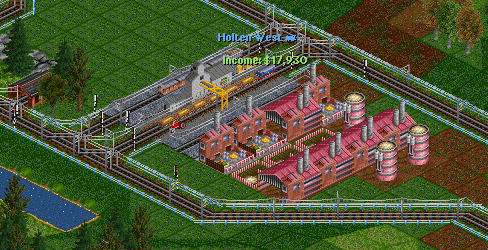 [fishing grounds]
I planned a passenger service from Rijssen to ?, but then subsidies were offered for the first fish service from Rijssen Fishing Grounds to Nijverdal Food Processing Plant, so I connected [fish1] to my food plant.
Lucky me that I hadn't read the newspaper right: Rijssen had two fishing grounds and there were two food plants close to each other, so I connected the wrong grounds to the wrong plant. A very short time later, Nijverdal food plant closed...
Next I connected the second fishing grounds.
To get the fish, I need docks in the water since I have the 'standard' non-stop handling, because sometimes I build stations on a line that shouldn't be serviced by all trains, so they need 'non-stop'. Therefore, I can't use buoys to load goods (unless I did understand something wrong). 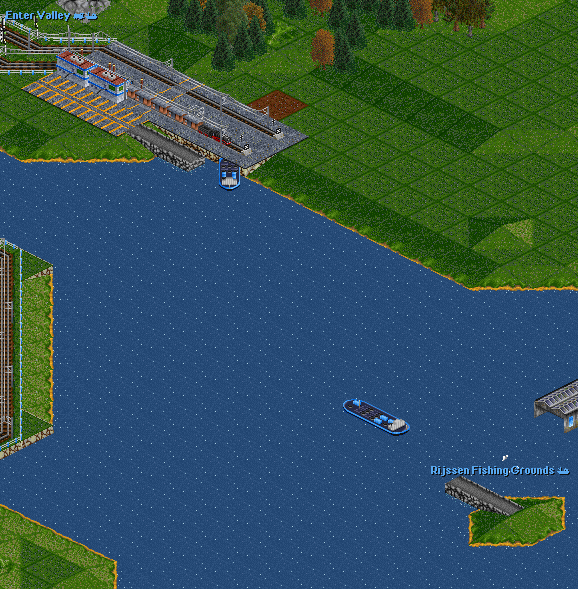 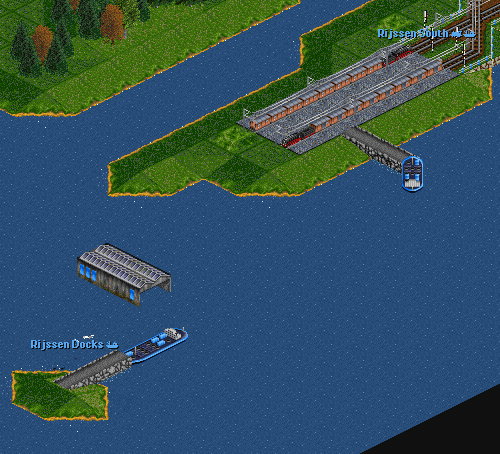 I will be off for a while since I am currently playing a game with new features from 2.6.1576. I could have started posting pictures of that game, but now it's too late (1980). I believe I should return, maybe with a new game.
Top

After being away for a while, I found myself playing a game that I started some time ago. When I decided to put pics here, I also found some shots made in the first years of this game. Here are some pics of my first coal mines (not very exciting) and a farm that has double tracks yet (this pic is from 1933, if I'm not mistaken) 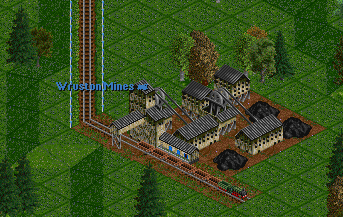 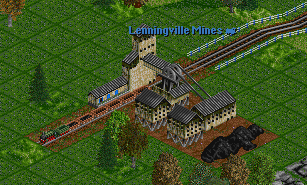 I tried that doublification trick (is that a correct english word?) on another farm as well; apparently something went wrong there.

On the next image, you see the main railroads crossing from this game. First you see it after I've been digging randomly, next you see when the engineers began to bother. 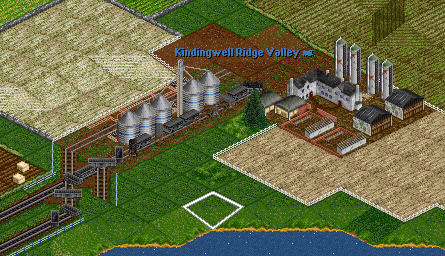 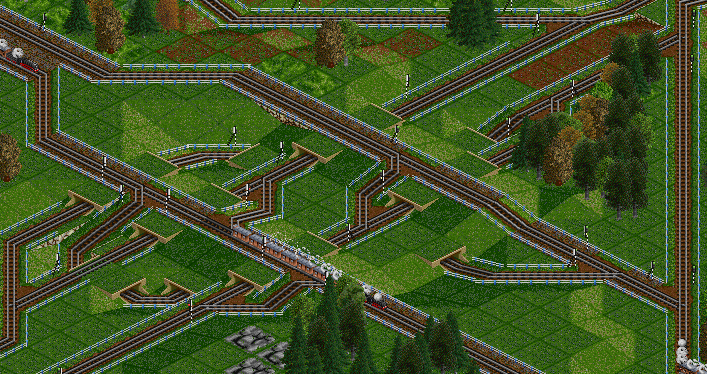 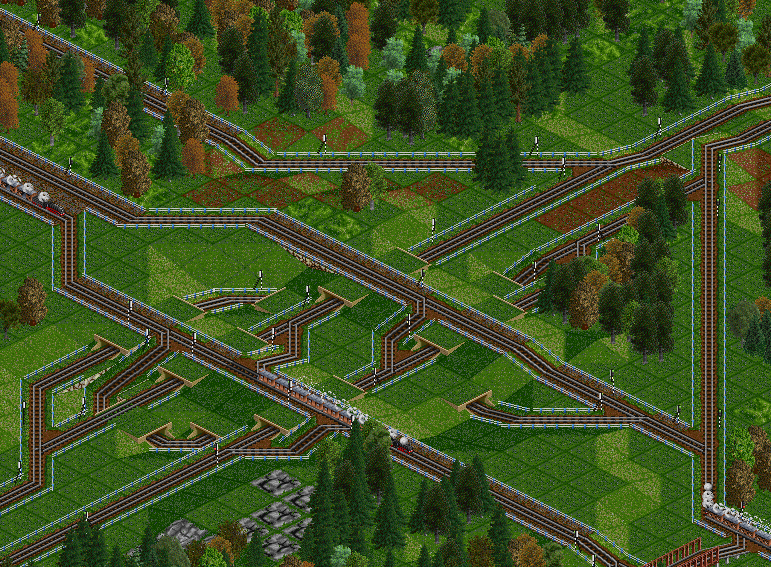 Here you can download a bigger picture of my main crossing, taken in 1949. Trains are storming the crossing, and the first electric loco's have entered service. The only reason for this is that we might score more points if we do as if we are an environmentally friendly corporation. Most people don't know that electricity is produced by coal, so...

On the other big pic you can see I'm trying to invest tose environment points in branching my passenger line (I've got no pics of this line, helaas, maybe another time), but Kindingwell Ridge is resisting. I've done too much havoc to their landscape (you remember that crossing?)

[edit] By the way, have you noticed I tried to add some more ballast to the 'horizontal' tracks? How about the results? You can give comments, of course. Also, I would like to know if you like my screenshots[/edit]

I suppose that comment is about that crash picture at Kindingwell Ridge? I was not trying to build docks there, but thanks for the tip. Maybe I can use it later in some game.
Traffic Manager, how about that!

Nope, its about the pics of the fishing grounds from July.
|||| My OTTD/TTDP pics ||||Currently slighty obsessed with getting Platinum Trophies||||Retired moderator||||
Top

Some new pics. Here you can see the brand-new commuter train, this is its first stop at Kindingwell Ridge. This also is the first station in the all-new Dutch layout.

Passengers are dropped off at Leborough, were they optionally can take the intercity trains, for example to Kindingtown. These two stations are (currently) my food dropping places, you can see another new train delivering its first load of fresh food.

About the fishing grounds: that was from another game, but again, thanks for the comment.

By the way, is there any way to re-center a stations name, except from breaking it down and rebuilding? Kindingwell Ridge was moved for this new commuter line, but the old platform was kept in service for some time since one of those 'intercities' had this as a stop. Now the signature is not near the station anymore. 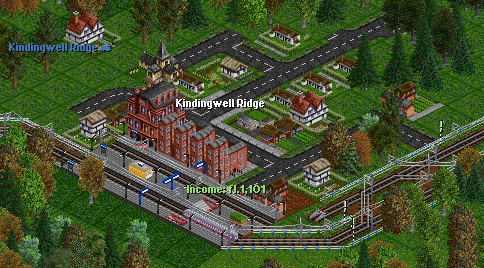 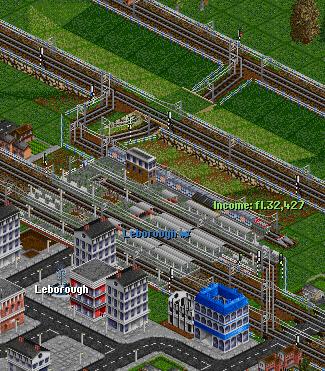 I think the train crash occurred because there weren't any traffic/signals.
Any dream worth having,
Is a dream worth fighting for!
Top

I am not a newbie to this game, I often have my trains crash when rearranging my stations, and especially those junctions like the one you can see somewhere earlier in the thread. Most of the time, crashes occur when rearranging a PBS junction, but I have too much money to worry about them that much.
Traffic Manager, how about that!

The workhorses of the (of my) economy: coal trains. Three of them are trying to outrun each other.

A brand-new V200, the first DBset-train that has a better top speed/more power, meets his older 'colleagues', the BR01. They say, train personnel is afraid of losing their jobs because these new trains don't need a fireman. We, of course, try to avoid enforced dismissals.

I always succeed in clogging up my network if I have a food plant in it: usually, the number of trains delivering grain/livestock and those taking away food grow faster than the stations' capacity. After a major redesign of the station, it should be able to last for a few years. 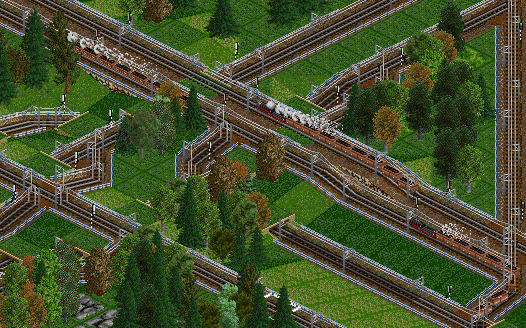 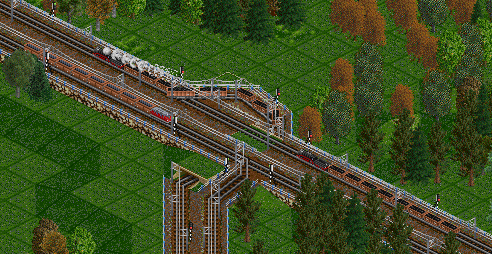 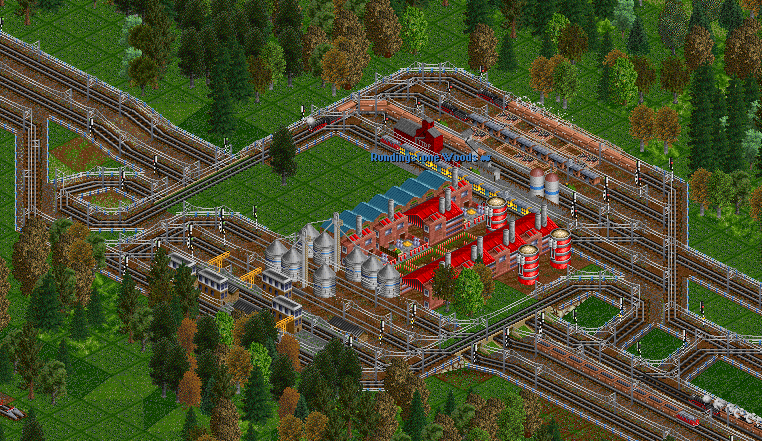 I couldn't leave this junction behind. I was waiting for the Dutch set, but that won't be in time for my holidays anymore

. I started this game last week using the UKRS, then found out it couldn't transport food and switched to the DBset XL. Unfortunately, this shot was made with transparent buildings, otherwise you would also have seen a nice Dutch station at New Frondwood Airport.

This really was a great junction just to watch trains passing by. Passenger trains and mail/money trains from SE and SW take the route to NF Airport and Rarnley Market, respectively, to continue their way in the 'opposite' direction. Goods are delivered using the separate double line to the north. Food trains approach from the east and used to clog up the junction by taking the wrong exits (why just the food trains?) so they were dropped later.

Last but not least, coal trains can be seen loading in the norhtwest corner of this picture.

Also, note that I lost my self-painted gravel bed.

Right, so I thought about a revival. I started a new game using the UKRS, since I'm not planning to transport any food anymore (in my last game, the newsreader kept buzzing station x, y, z... no longer accepts food/ does accept food...) and the Dutch set is not yet ready.

A map of industries is provided here: 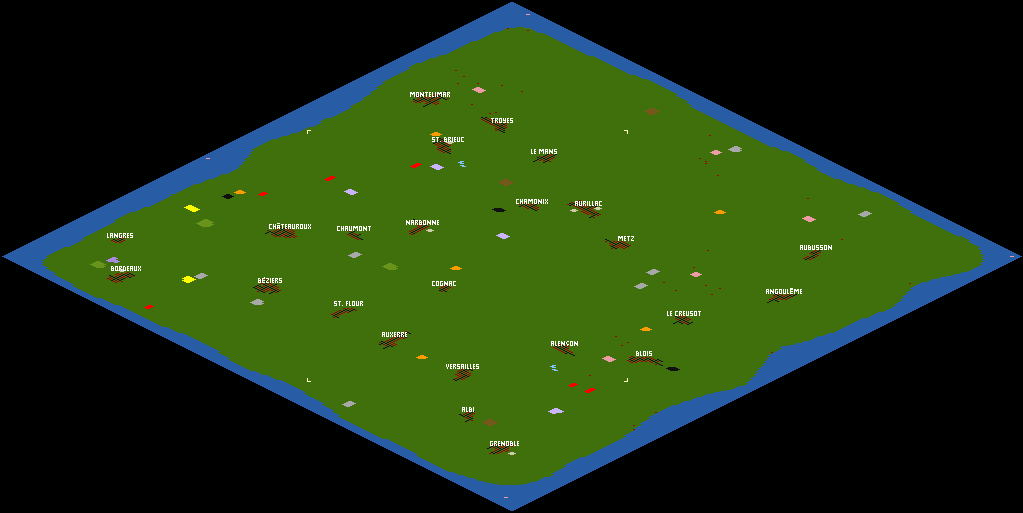 As usual, I started by hooking up some coal mines to a power station, as you can see in these pictures (firstmine and firstrevenue). At Châteauroux Mines a train (0-6-0 freigt) can be seen loading its first load of coal, and then delivering this to the Narbonne Power Station in the second shot. Another station is closer but I think (don't know for sure) it is more efficient to deliver any load of goods over a slightly longer distance; also this power station is closer to another coal mine - the second one I connected. 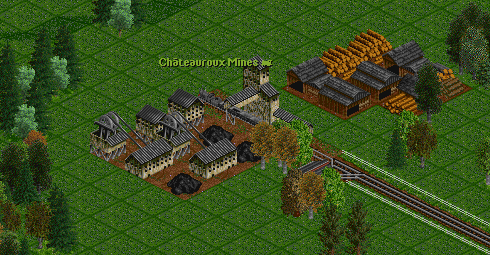 Next, I had a look at subsidies and found out that some towns would offer 'double' subsidies: for transporting passengers from St. Brieuc to Aurillac and back, for instance, so I built a line there, bought a 0-6-0 Pannier Tank and attached one passenger wagon to it (and by then, all my money was gone).

In the Aurillac picture, you will find a double station and a continuing track; that was of course not the case in 1930 (but I had forgotten to take a screenshot then). 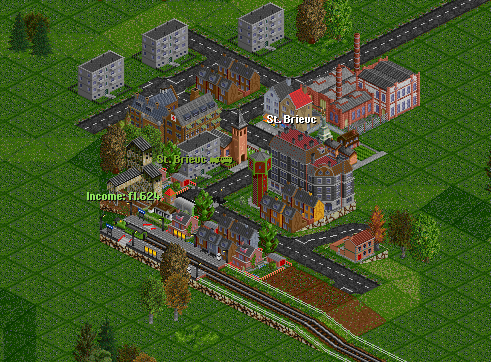 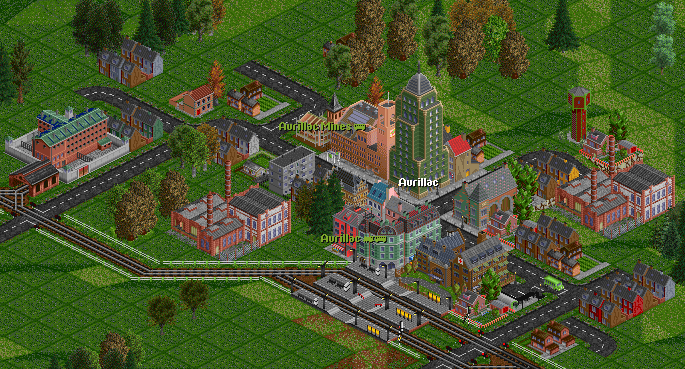 I found enough money to service a third coal mine. Here you can see a brand-new 0-6-0 tank engine (slightly cheaper than a freighter) reversing towards a power station with its first load of coal.

Back to the second coal mine: having no money for thorough landscaping, it's a long way back uphill (and then downhill again) to that mine, and the Freight engine has to work hard, even with this empty train.