Lankku wrote: I have no idea what I'm doing.

But you doing it pretty good, I like those screenshots a lot

BTW why the steel trains being pulled by diesels? Aren't the line fully electrized?

Lankku wrote: I have no idea what I'm doing.

Add some more trees next time. Hope it fixes the no worth part. (If you bored with trees, just download the Stolen Trees GRF from in game downloader)


colossal404 wrote:BTW why the steel trains being pulled by diesels? Aren't the line fully electrized?

The most powerfull electrics have less TE than what he currently uses. So... well, depends on players.
YNM = yoursNotMine - Don't get it ?
「ヨーッスノットマイン」と呼ぶことはできる。
Top

Yoursnotmine wrote: Add some more trees next time. Hope it fixes the no worth part. (If you bored with trees, just download the Stolen Trees GRF from in game downloader)

Already using Stolen Trees. This map just has practically no trees on it. It's kind of like the Falklands is some ways. Not sure why that happened.

colossal404 wrote:BTW why the steel trains being pulled by diesels? Aren't the line fully electrized?

The most powerfull electrics have less TE than what he currently uses. So... well, depends on players.

When the original steam hauled services were replaced, electric traction wasn't advanced enough to make large scale electrification viable, so diesel was the answer, therefore most sections of the network remained non-electrified until the mid 80s, the steel stations among such sections.
My OpenTTD screenshot thread.

Yoursnotmine wrote: Add some more trees next time. Hope it fixes the no worth part. (If you bored with trees, just download the Stolen Trees GRF from in game downloader)

Already using Stolen Trees. This map just has practically no trees on it. It's kind of like the Falklands is some ways. Not sure why that happened.

Next time, if starting a new game (or loading heightmap), see the random seed, try to set it more than 0 (you can also type it manually). Check vegetation distribution, choose anything from "medium" to "very high". This should work on Normal OTTD

If still no trees (or small amount of trees generated) , just tell me are you using any patch.

Also, check the construction settings in Advanced Settings, check that trees are allowed to put in anywhere in game.
YNM = yoursNotMine - Don't get it ?
「ヨーッスノットマイン」と呼ぶことはできる。
Top

I love it when cities grow utterly out of control.

It's currently 1921 and my little company runs a passenger line from Tokyo to Takasaki, on which agricultural trains also run. I am also working on another line southwest out of Tokyo which will eventually reach Nagoya. There are a couple of farms on this route also which will help boost the profit. Still yet to find a suitable place to ship the goods from the factory however.

A lot changes in thirteen years. Now it's 1934 and the company has expanded rapidly. Trackage now stretches from Yamagata to Kobe, with passenger services operating all mainlines. In addition to this expansion of passenger services, agricultural traffic has continued to grow due to the ease of connecting farms to the network and the large number of well located factories to use for production. Goods is now transported from these factories to various cities, a group of services which are proving to be extremely profitable.

One of the aformention factories in Tsu.

Another, this one in Shizuoka. Wood trains come in off the single tracks branch line to serve the sawmill.

Osaka Junction and its two stations.

Nagoya and it's local line which connects its two main stations.

By 1940, most of the major population centres on Honshu are connected to the network, which passenger services up and running. Electric traction is beginning to be used on some of the shorter routes, but on the whole, steam remains king.

Yamagata station and junction. The station is the terminus for four different routes and acts as an interchange between services.

Takasaki is the terminus of the companys first passenger line, but has recently seen the addition of four through platforms for the line from Nagano. While it is currently only a terminus for three routes, a semi-fast service from Nagano to Tokyo will soon be added, with Takasaki being the only intermediate stop. 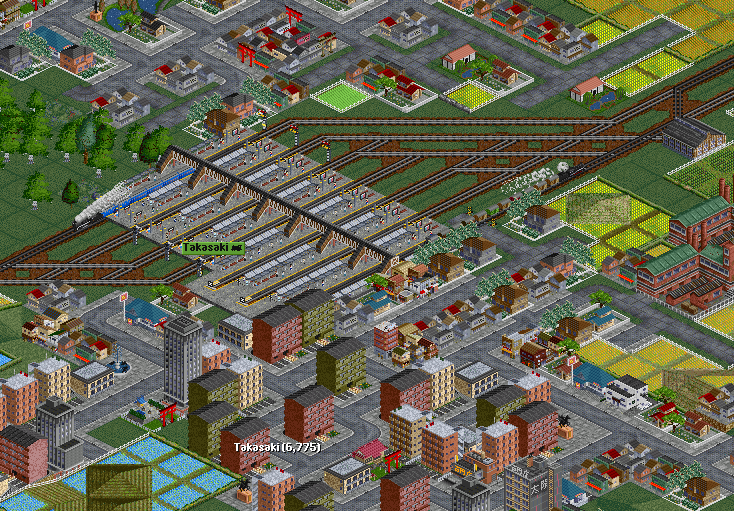 Kyoto, like many major cities, has multiple stations, however unlike most, which are served by a termini at each end of the city, it is instead served by a local station and a larger terminus. The local station was the first to be built, being part of the Nagoya-Kobe line, while the terminus was constructed to serve the Kyoto-Wakayama and Kyoto-Kanazawa routes. A service from Kyoto North to Kobe was also added, stopping at all station, allowing passengers to change trains to reach their destinations.

Okayama is another exception to the usual trend of two termini in large cities, with the original terminus and the newly built, though equal in size through station. The through station is on the Okayama-Hiroshima line which continues on to Shinmonoseki where ferry services will connect the Honshu network to the planned Network on Kyushu. Similar connections are planned for Shikoku, between Okayama and Takamatsu and Wakayama and Tokushima, as well as Hokkaido, between Aomori and Hakodate.

And as of 1945, the Kyushu railway has been opened to both passengers, and agricultural traffic. Branchlines into the interior of the island will so be built to serve the numerous forests found there.

One more shot and the map of Kyushu. 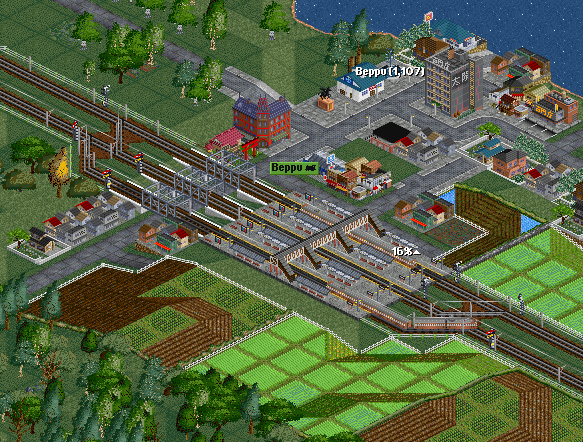 The Shikoku Railway opened for both passengers and agricultural traffic in 1950. There are two routes on the island. The main north coast line serves the larger cities along it, and carries the bulk of the freight, while the south coast line, being mostly single track, serves the more minor settlements.

Takamatsu is one of the cities on the north line. A ferry service connects it to Okayama on Honshu, while goods from the only factory on Shikoku is transported here.

The station for the aforementioned factory in Matsuyama.

Meanwhile, back on Honshu, the forests, of which there are many, are rapidly being connected to the network.

One of the sawmill stations, this one in Morioka.

And another in Hiroshima, also showing the trackwork on the approach to Hiroshima station.

The additional trains from wood services, their associated goods trains, as well as increases in both passenger and agricultural traffic are beginning to cause problems and choke points are starting to become noticable, particularly where heavily used mainlines intersect.

An example is Fukushima. The station acts as an interchange bettwen passenger routes on the two mainlines it sits on, causing higher than average traffic to pass through. This is made worse by the large amount of freight passing through. Additional platforms will be added, as well as an avoiding line so that freight trains on different lines do now interfere with eachother.

Yamagata on the other hand will be somewhat more difficult to improve due to the presence of a terminus station. While the current layout works well at most times, there are occasions where a sudden flood of trains pours through and slashes their speed. Redesigning the junction is an option, though I will more likely just reroute the freight services via a new line to connect to the planned Fukushima avoiding line.

As of 1955, with the opening of the Hokkaido railway, all four of the main islands of Japan have rail networks. Currently the Hokkaido railway carries only passengers, but due to the sheer amount of farms and forests on the island, I reckon freight trains will soon heavily outnumber passenger trains.

Sapporo station, with a few EMUs on passenger services. This particular class sees use on all four islands. On Hokkaido, Kyushu and Shikoku they are the only class in used for passnger traffic, however steam is too well established for conversion of all services on Honshu to electric traction, though most new passenger routes are electrified. The rest will be converted in time. 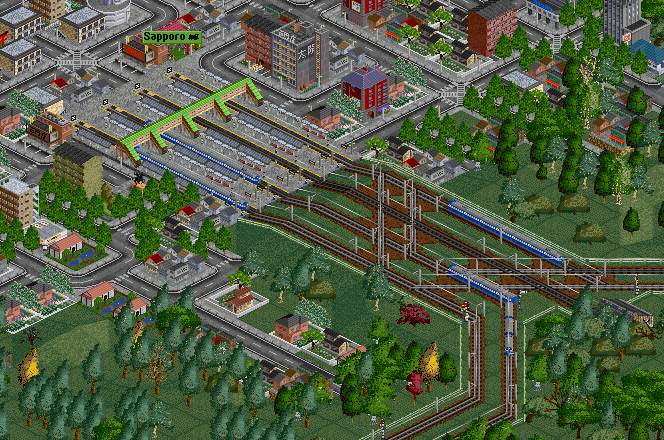