Screenshots of your games! All Transport Tycoon games acceptable (including TTDPatch and OpenTTD).
Post Reply
928 posts

Now here's something you don't see every day. I remembered that diesel shunter with the rake of old AEC cars, so I had them all hauled off to the scrap yard, and then sent the diesel to move three mk2's sitting in one of the depots. As the metro network now only uses EMU and DMU stock, they were just going to waste. 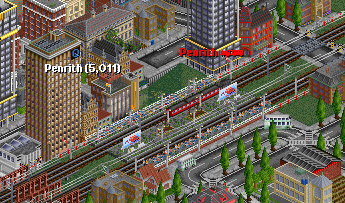 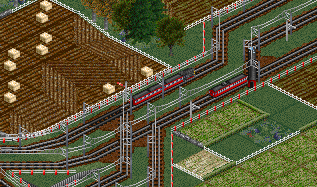 So year, 1975 is coming up, and more works are being done around Loxhill. The rest of the network seems to be running itself, with a decent handle on passengers waiting at stations. The suburbs of Loxhill though, and the nearby towns, keep growing, and the metro network needs to be upgraded to suit, yet again!

Firstly, the upgrade to the station at Burnham has begun, with a new couple of platforms provided for the Northern Sprinters. This resulted in the line being ripped up between Burnham and Loxhill, as it was decided it was easier for passengers to change trains here, and have the Sprint trains continue on south, as a metro service, rather than terminate the trains at Loxhill and have another terminus at Burnham. This way, trains flowing down into Burnham can unload passengers/luggage, lock the luggage car, and then continue as a metro service (albeit with more comfy seats) through to Godmanchester.

Not only does this give people in Godmanchester a direct link to York, in the far north, it also gives passengers in the inner west more options re: rail travel. 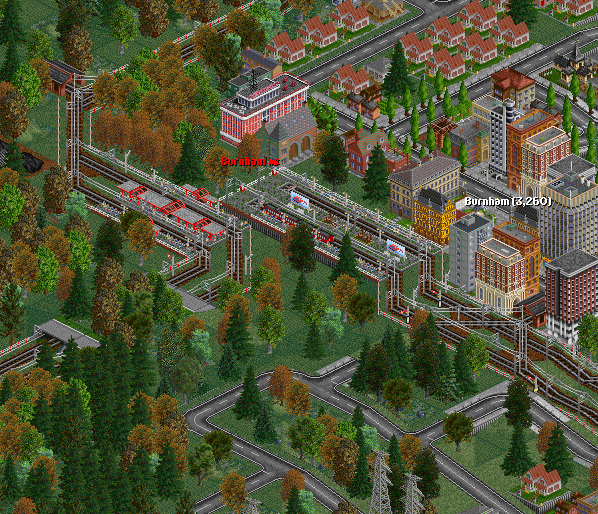 A temporary terminus was built at Grimsby, to terminate trains coming through from Irlam, although eventually the line will extend to Godmanchester.

Meanwhile, with the whole new section built in the south showing very high passenger numbers, more trains would need to be ordered. Originally, the plan was to make the existing trains 8-car trains, and order another 2 4-car sets, but there would be a very poor frequencey of trains on the line with only 3 sets in operation. So, the whole line was duplicated, at a massive expensive (remember, most of this line is balanced on the ocean cliffs between the highway and the ocean). The hardest bit was at Bristol, where the town had swallowed the railway line.

Finally, after all the duplication, 3 more 4-car sets were introduced onto the line, bringing the total modified AM10's up to 5 4-car trains. 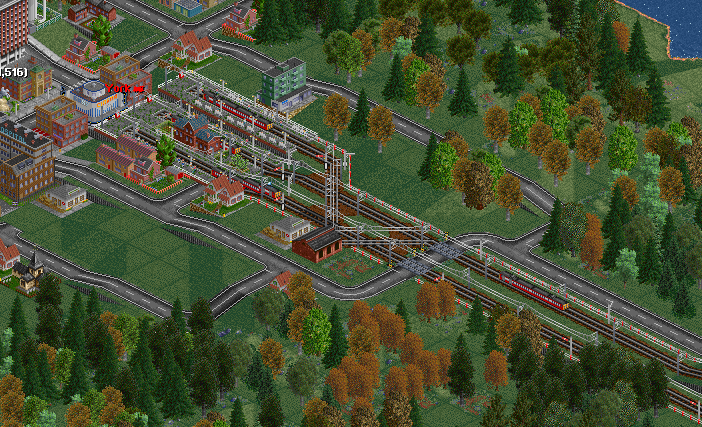 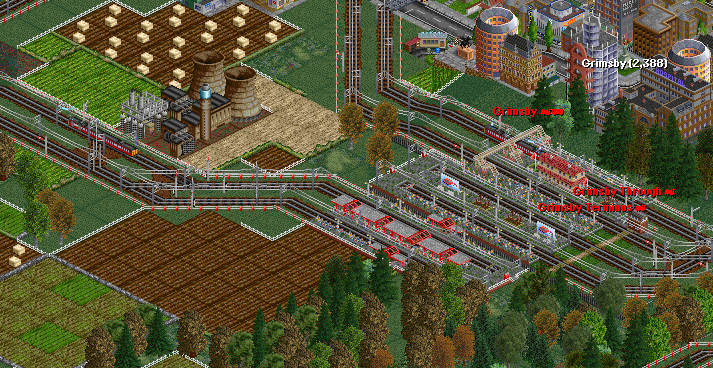 Finally, while all this was going on in the north, construction work was being done at Godmanchester, again. Commuters were annoyed with the delays to their trains, but at the end of the day (actually, 2 years on), when the new platforms opened with their new rooves, and the new train service to the north, they were pretty impressed.

I've also included a couple of screenies of my network around Loxhill, followed by screenies of what the scenario looked like in the beginning. 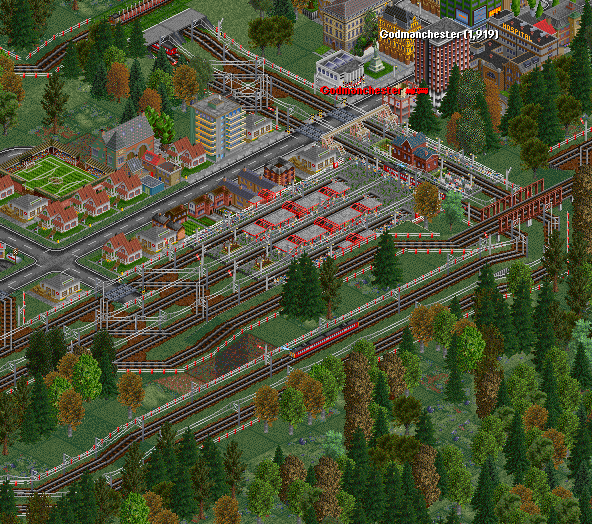 A couple of quick updates.

I finally gave Workington Station the upgrade it had been crying out for. All the other major stops on the line were 4 platforms, except this one. And with more and more all-stops services, it wasn't getting away with just 2 platforms anymore.

Secondly, Quedgely can now turn trains around, thus allowing for trains to terminate here, rather than going further up the line for no reason.

So many screenshots! They're nice

How many trains do you have right now?
Top

Woo, some very nice shots. You've made me want to go back and play my game again now.

orudge wrote:Woo, some very nice shots. You've made me want to go back and play my game again now.

You should want to do that already

. Thats one of the things that gets me through the last hour of my shift. The others being food, quiet bus ride home with book, and the promise of ICED TEA at home.

More shots to come, I'm reinventing my timetable, and reworking the entire inter-city roster.
Posted by Raichase. Visit my Flickr! Gallery, Blog (get a feed of everyone at once at Planet TT-Forums).
Raichase - Perfect timing, all the time: [13:37] * Now talking in #tycoon

This is definitely my favourite screenie thread. All your junctions are class!

I really like your screenshots, Rai. You make it look very nice

i missed something.. those roads! which set are the from?

They are part of the Japanset landscape, and are not currently available for download.
Formerly known as Lachie
Top

Japan Set Roads GameR, try the Japan Set website (it appears in a few peoples signatures, and I believe there is a link to it from the patch website).

High class roads, but the crossings are not very British, so when the Combined Roadset or British Roadset has Japan Landscape support, I'll switch over. However, the Japan Set roads will always be in the same leauge as those sets, in regards to quality.

In the news, a recent purge of services was completed, as there were a number of irregular services timetabled, which didn't make much sense now that the whole dynamic of the network has changed. Mail trains with passenger coaches have been removed, and a lot of the express trains were cut. Now, there are various Intercity Services connecting Loxhill, Lyonshall, Chelmsford and Godmanchester. Shared by rosters of AL6's and HST's, these trains provide a fast link around the network.

Stockton has been taken off the stopping pattern of all Intercity trains, mostly due to the sheer volume of all-stoppers servicing the station. Passengers can change to an Intercity train at Quedgeley if they so desire, or even Workington.

Also, as of December 1981, all of the existing mk1 coaches still in active service on the network have been scrapped, or withdrawn. Most coaches on the network are now Mk2's, with Mk3's on the newer trains, and on the HST's.

Type 4's have been removed from Intercity trains, and are now supplementing the aging Type 2's and Type 3's on all-stops trains.

Following are some promotion shots used by the company to promote the new Intercity trains.

Firstly, one of the "Test HSTs" can be seen. 3 sets of 9-cars were bought for testing, one running trains between Loxhill and Chelmsford, and the other two replacing Type 4's on the express between Lyonshall and Chelmsford. They consist of two power cars, capable of running under their own power, one mail/baggage van, one buffet car (following the mail/baggage van), 2 first class trailers, and 3 economy trailers.

Secondly, a Type 2 can be seeing hauling one of the last trains containing mk1 coaches (the all red ones). They really had to go, being old and clunky. 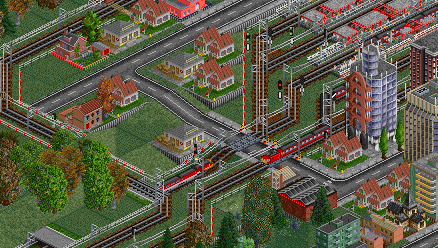 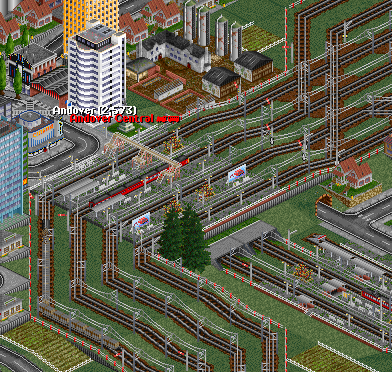 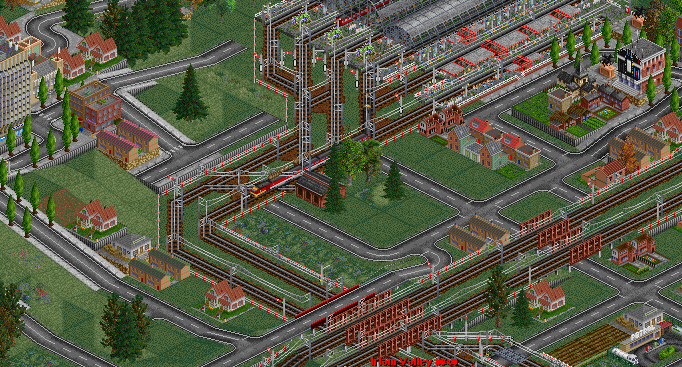 i touhgd the japanese road st looked different... must be an new version...

Whoa, was posting as Whitehand posted. I could have sworn the roads were in the public domain, as I don't (think) I'm a Japan Set tester. I don't know though, I seem to test a lot of things

If you're ever looking to trainspot one of the new HST trains before they get dirty, or delegated to less-than-premium services, travel to Chelmsford. Here you can see all three of the test HST's on display. Another two HSTs have been purchased as part of a larger order, the new sets will be 10-car trains, with an extra baggage car being added, with the buffet put into the end of one of them, allowing for the existing buffet car to be turned into an economy trailer.

At the same time, some "half" HST sets were ordered, both to supply spare power cars, as well as trailer cars, however they have now been put into service running trains from Godmanchester to Lyonshall, to save passengers having to change trains at Loxhill. These mini-HST's are single baggage car, single first class/buffet trailer and 3 economy trailers. Saves extending Godmanchester Station, and still provides residents with a fast connection across the map. 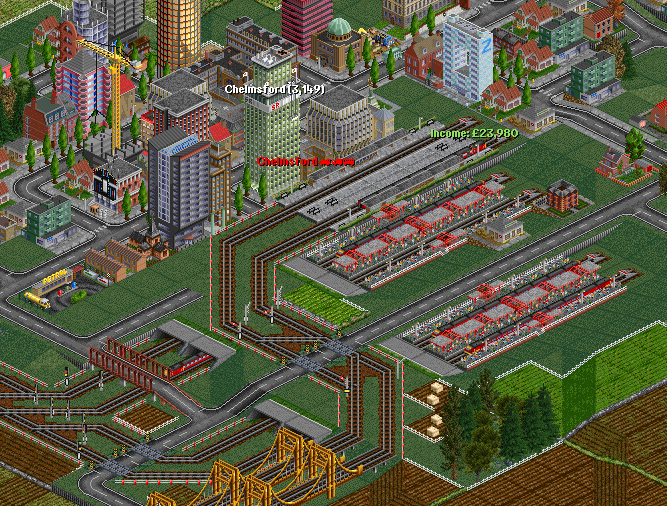 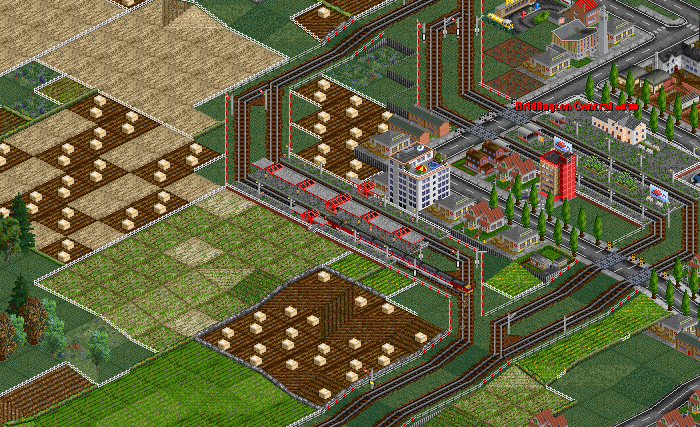 Well, I do, but you make me want to do it even more so. But then I'd end up neglecting the forums, heh.