uzurpator wrote:Ok - I think we should really disregard this thread and build the tree on the fly.

BTW - I name classes by their level in the tree:

Creative, maybe, but WRONG. Should be the other way around (ie Satan as the server), as a server process is generally a DAEMON!

There's only a very small chance that our architecture will be right the first time. So, I propose to do things incrementally.

When looking at the (preliminary?) task list, I think that the small demo I've posted earlier today satisfies task 1 and a part of task 2.

Now, for the rest of task 2 and 3, I propose the following architecture:

The View and Controller part of both applications will be done properly at a later time. We will focus on the model, for now.

The model of the client will look like this:

The Map interface is used by the View and the Controller to access the map. It is implemented by the MapCache class, which stores (caches) individual Tiles. The tiles are retrieved from the server through the ClientSocket class. Communication is done with Packets, which are created by the PacketFactory.

The server has a ServerSocket which is comparable to the ClientSocket class in the client, but still quite different. Perhaps those two classes can share a super class. We'll see. We can always refactor in the future. The ServerSocket connects to the real Map, which happens to support all the same actions as the Map interface in the Client.

Notice that some classes are shared between Server and Client: Packets are only a medium to transmit information. Hence, it makes perfect sense to share these classes between the two applications.


Now... What is the purpose of all this. A prototype/demo/pre-alpha/whatever version of Transport Empire must satisfy these requirements: The following items will be milestones for task 3: Anyone willing to help is welcome. 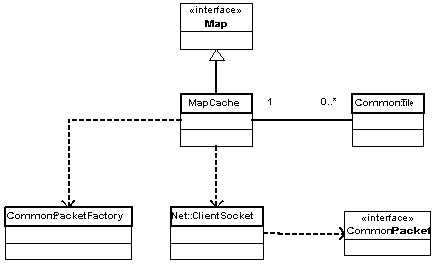 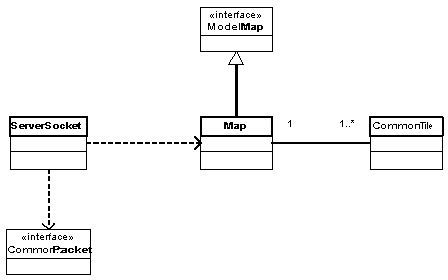 Milestone 1 has been reached.

In the zipfile is a _very_ simple application that meets the requirements. It's basically the same as the demo I made earlier, except that this is Object Oriented and uses some form of abstraction over the data traffic.

The same condition holds nevertheless: compile it on linux or mingw on windows and run from a console. Start the Server first, then the Client.

A little refactoring and a few new classes and voila! Milestone 2.

The same rules hold for this program: compile it on linux or mingw on windows and run from a console. Start the Server first, then the Client. Windows executables are included.

Talking into an empty room sucks... I hope at least someone will show up sooner or later and read these posts.

Milestone 3 should have been a part of milestone 4...

Task 4 is done now. The included source code is based on RakNet. This wasn't really necessary, but I think we should go with RakNet anyway. I can still rip it out later if other people think otherwise.

One sidenote: both the server and the client application do not terminate anymore. I did this for two reasons:
1. I'm too lazy to write exit code.
2. The transition to milestone 5 is easier this way.

Another note: I have not tested the code on Linux yet.
Edit: The code werks perfectly on Linux, but it does not compile without libpthread, which should be present on almost all Linux installations. I've changed Makefile.var to add the library on non-windows systems. When I upload milestone 5, this glitch will be fixed.

Can you send me an executable. I don't know if it will fit on a PM?!

two-clients.png
Just for fun, I added another client. It connects nicely, but because some small design decision, all packets from server to client are broadcasted. That's why the first client receives the map fragment twice.
(74.17 KiB) Downloaded 56 times

Conclusions from this exercise: