Many of the industries in this game take up too much real estate, specially in mountainous scenarios.

So I've made two new objects.

They produce iron and coal respectively. They both also produce a small number of passengers (workers who want to go home). They both accept passengers (new workers) and lumber (for bracing the tunnels).

Download the dat files and place them in your locomotion objdata folder. They have unique file names, so they don't replace any existing file.

Figure 1 shows the small iron ore mine during the game. Figure 4 shows both new buildings just sitting in a field. 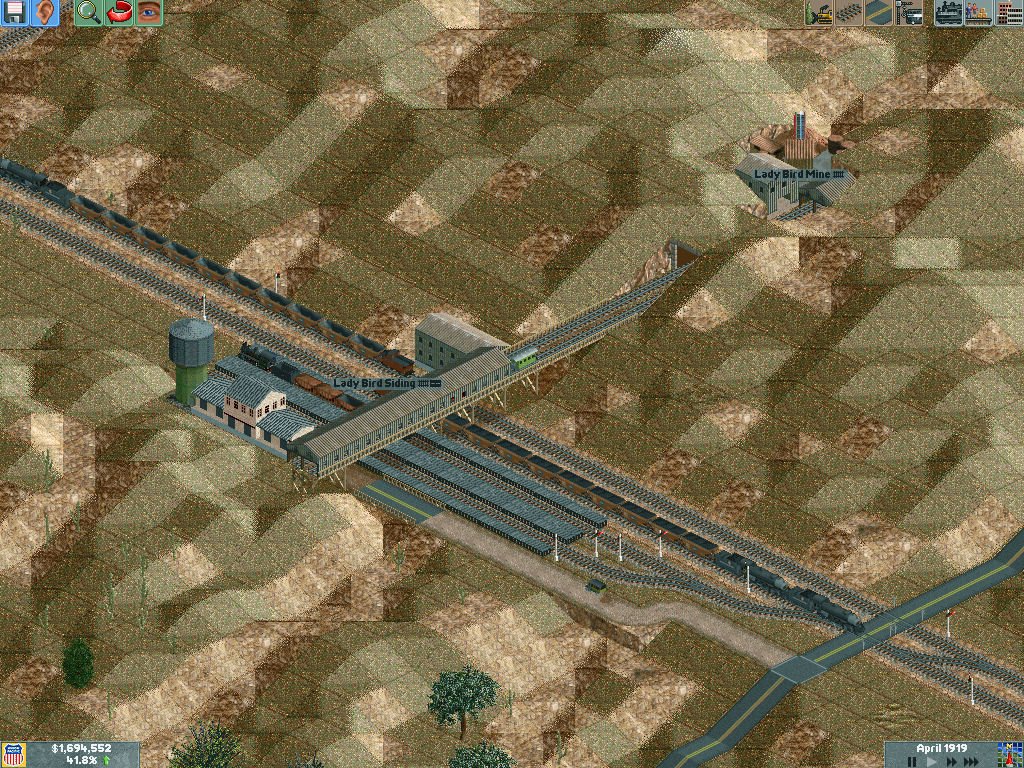 Put the dat file in your objdata folder. It doesn't overwrite any locomotion files. 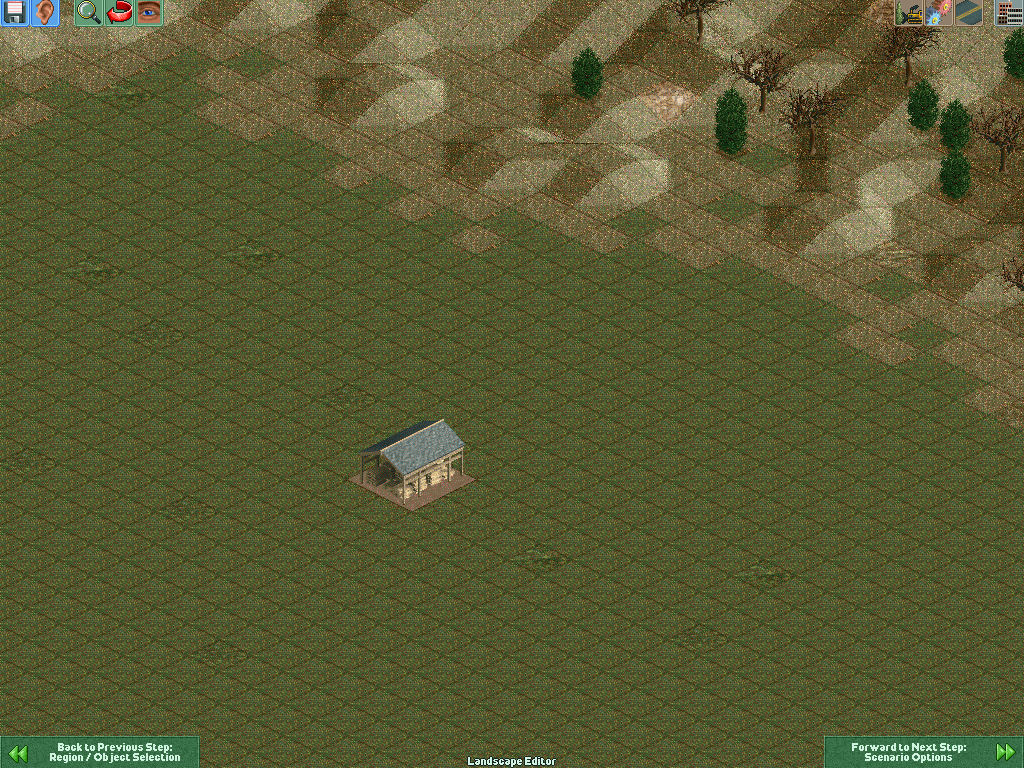 You may have to have a word with Emperor Darth Sidious (EDS) because he does the same sort of thing. But his industries don't close down. There is a way to change that in the XML so that the city buildings don't close down. Then there's the issue of production. It seems that yours are slow and so the vehicles loading lose money.

A good idea though. Keep at it.

Thanks for the feedback, Greyfox.

Fixing the production is sort of simple. Plastikman (small corral and grain farm) and EDS both have the "city" industry produce one type of item twice, such as livestock - livestock or coal - coal. My first attempt at this has the "city" industry producing two types of items, such as coal - passengers. Picking up passengers at the mine isn't working quite the way I wanted it to anyway, so having the mine double produce coal or ore works fine.

I used the small corral as my template for these. It has a chance to disappear during the game. I've compared the xml code to EDS's "city" coalmine. There are some differences. I have no idea if any of those keep the building from disappearing during game play or not. I can certainly try using one of his "city" industries as a template and see if that fixes the problem. It's not a simple test, though. I've run some of these scenarios for 40+ years and not had a building disappear. I've had other buildings disappear in the first couple months of playing. So failure to disappear doesn't mean the building won't disappear in the future.
Top

Nice to see that you are being creative mate, but most of these things are already build and released. I released the gold, silver and diamondmines, windmill and oilwells as city-buildings. The coal- and iron ore citybuildings are also released by me (in my valuables-mod), but not made by me. In fact these two city mines where edited as city-buildings by Digidampfman. The buildings of course are created by Chris Sawyer, but he did all of the editing.

So in fact you use his city-mine-templates if you wan't to see how it works. I can also show some things for you...

It's all about this line:

If you add this one in the XML-code, then the building becomes indestructable. It cannot be destroyed by the city, the player or the AI-players and will last forever. Another nice option to make city-buildings produce the maximum amount of cargo can be found in this line (it's from my city-coalmine released with the valuables-mod and edited in a different way then Digidampfman's version):

This works together with this line:

As you can see, there are 4 types of cargo that can be used for city-buildings. You can let it produce 2 types of different (or the same in this case) cargo's. 255 is the maximum amount. That stands for like 12 ton's of coal per month. I have used both slots for the production of coal at the maximum, so for each building 24 tons of coal is produced each month.

Since [0] and [1] is coal, and it should not accept coal (only produce) I left the two lines for "numaccept" empty and filled in "0".
However [2] and [3] are food (for the workers) and timber (for the support of tunnels) is needed there. If you fill in 255 again, the maximum amount of food and timber is accepted at the mines. But you can also keep this amount a little lower...That's completly up to you.

I hope that this helped, and that you learned a little more about XML-editing.

(I do not give permission to release my own city buildings for these 2x2 buildings, because anybody can download them already via my mods)

I figured out the production part earlier today.

I gather the code " <bit name="bit_2">1</bit>" makes the building like a lighthouse or electric power line tower. That's probably ok.

I was beginning to get the feeling I was recreating items that had already been created. Oh well. It was a bit of fun trying. I've got your valuable's mod. Guess I'll hunt through it for the items I want to use. I'm using some of your mine tram vehicles now.

I'll probably go ahead and create the "fishing camp," the "resort," and the "tavern." The Colorado Central, the Denver, South Park and Pacific, and the Denver and Rio Grande established these items out in the middle of nowhere in scenic locations. They generated a small amount of passenger traffic. They may be what I want to generate a need for a small local or mixed train in the mountains.
Top

TJ-99 wrote:Thanks EDS. I was beginning to get the feeling I was recreating items that had already been created. Oh well. It was a bit of fun trying.

You are one of those people that like to try things first. I respect that, because I have seen a lot of people come and go on these (Locomotion-Forums) that kept wining, asking and saying that they are just to lazy to try things out for them selfs.

It doesn't matter if you try to recreate stuff that other people already created and have fun with that, that's alright. You see, that's the way to learn stuff. I started too with stuff that other people created (never released it, apart from my mistake with NAM wich I still would like to work on and release if I find the time and inspiration to do it. Because it was by some people on the forums being called as one of the best mods for Locomotion, and that's why I still play with the original NAM as I made it) and I enjoyed and learned from it...That really took some time. Of course I still haven't learned to create my own buildings, that is way too much work now that I have a family with two daughters and other responsibilities. But I still enjoy creating some other stuff with the things that I did learned and found out all because of trying things out for myself.

It's amazing to see how a train that you created (in my case converted) drives on the tracks for the first time without errors, or to know that because of an idea (for the NAM, Valuables Mod and Food Mod) people have fun again with the game and things will come to life in screenshots and videos on YouTube. Of course there where a few people who helped me a lot like Zimmlock, Illegal Alien, Tattoo, Walter1940 and even Plastikman...to get to know stuff that I didn't know before and I thank them for their efforts and help...All of these guys created great stuff for this game and I'm happy that they were able to help me understand things as well.

An example of how I started to figure out things for myself is my topic "Problem with Bridges" wich you can find in my signature...

Keep on trying and keep having fun and you'll see that you can create great things, there will always be people who will like your efforts...even for a game that's already ten years old !

The small coal mine produces coal and coal, and accepts passengers and lumber.

The two small lumber facilities produce lumber and lumber, and accept only passengers.

The attached zip file contains the six dat files for these objects. These files will over write earlier versions of the same files (from posts above this one). They do not over write any locomotion files or files from other mods. Unzip these files and place them in your locomotion objdata folder.

I'm still going to work on making small mountain mining town buildings, such as a general store, tavern/saloon, resort hotel and fishing/hunting camp. The idea is to have a small mining camp in the mountains that generates and receives cargoes without growing into a monstrous city. Two or three town buildings clustered around a mine or logging camp is what I have in mind. Or the mountain resorts operated by Colorado's narrow gauge lines in the 1880s and 1890s. 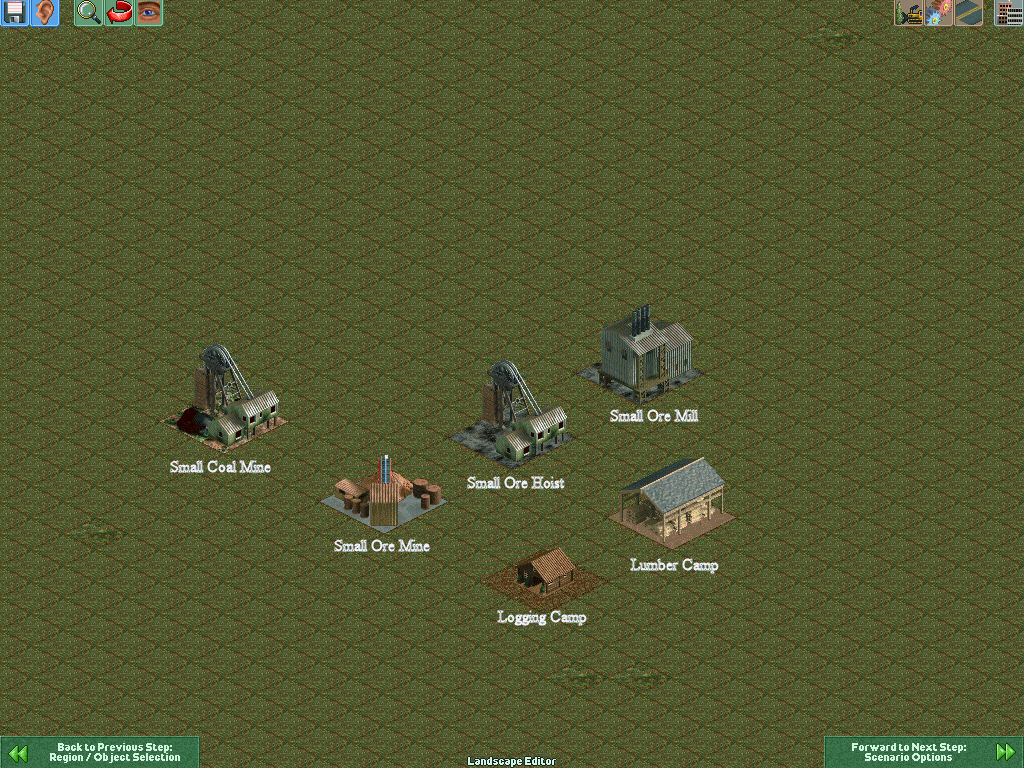 And where is the attached zip file?

Nice work, figured I would offer input (after the fact, but oh well).

I'm not a fan of the "passengers" idea, though I haven't used these yet. It's a nice thought, but as far as gameplay is concerned it's a bit counterproductive. For instance, if I decide not to deliver the passengers it produces then my performance index goes down because I'm ignoring cargo, which doesn't happen with regular industries.

I tend to play maps with long runs, such as Serpent and Tehachapi, and change the victory conditions to delivery of specific cargo, usually goods, to the opposite end of the map. So I didn't really give your point much consideration when I was developing these. To me, they generate a bit of passengers and cargo to generate the need for a mixed local running from mine to mine through the mountains picking up and delivering small amounts of cargo. Not too useful in 1970+ with modern diesels, but useful in the early 1900s with dinky little steam engines. I can see where those passengers could be annoying if you're playing for a performance rating.

Thanks for the feedback.
Top

I don't know if this has been talked about already, but sometimes these buildings glitch out and are offset from the base, making them look 4 dimensional.
This happens in 2/4 views that you look at, has there been a solution or is this not fixable?
Let the good times roll!
I make locomotion videos!