by teccuk
Westward Ho!
Okay this is the last of my back catalogue of releasable scenarios. I had fun with this one, i hope you will too!

Background
With the roaring twenties in full swing, expansion of American Railways is still needed. These two lush valleys have been seperated by a foboding desert since settlement. Link the eastern valley to the western valley and provide a much needed service by hauling mail between them. 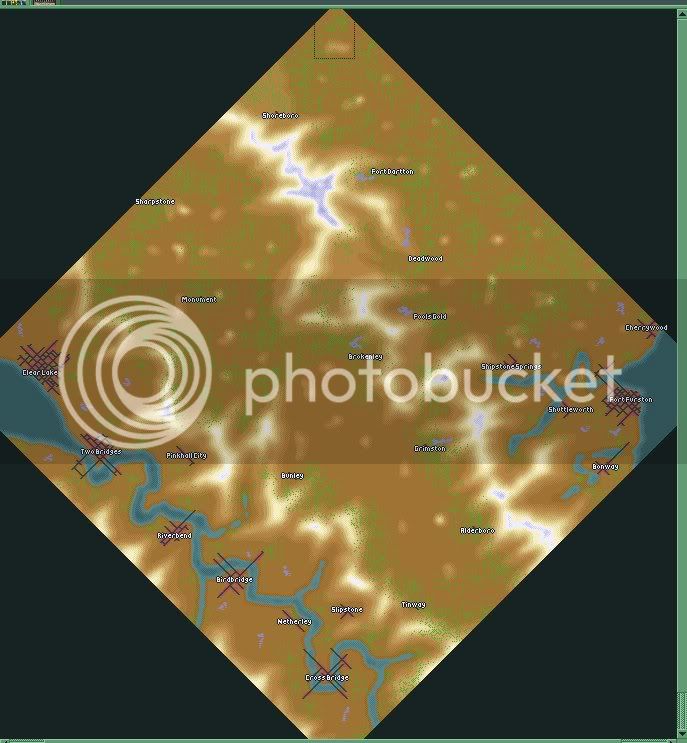 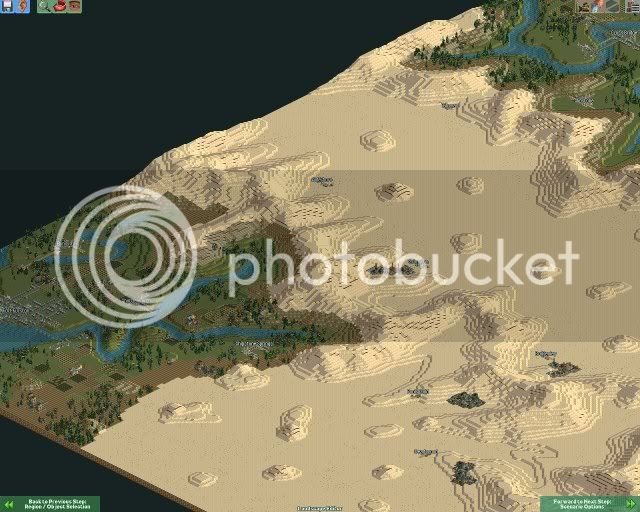 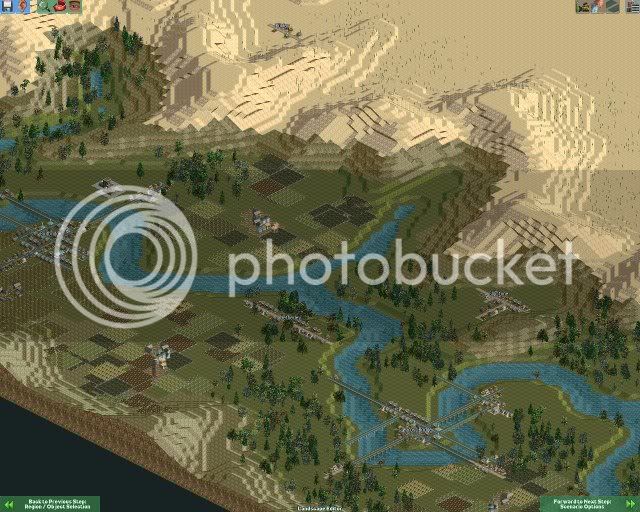 Notes:
I'm getting the hang of limiting of town growth, through carefully selecting which buildings allowed, even with good services 50 years on the largest towns can be managed easily to stop them going mental metropollis.
by Jose
Very nice map, very US. im off to play (add US pack).
by teccuk
Shame... i like this one

I like it too. I've been playing it on and off but I haven't finished yet

by DJC
I have finished this one, and great fun it was too. Thanks for the map, it goes very nicely with Plastikman's trains.

by Emperor Darth Sidious
It was a nice scenario to play. Only i didn't do it the same way you did. The first thing i did was add some other trains (mostly USA) and some more industry, didn't changed the map and all.

Then I started building with a few screens here for the process as it is today...(in case they work, but i'll find out soon)

by Emperor Darth Sidious
And this is one of the stations near a Steel Mill. Almost every Ore or Coal-Line in the game goes to this particular station. From hear it's steel is transported by 8 different American Trains from the USA and AMTRAK and CANADA set's.

Thank the maker for that, and the creator of this scenario who brought a lot of fun to dress it up.

by Emperor Darth Sidious
I also got these screenshots, this is the first line that I lay on this map. A connection between the cities in the middle of the map. All connected via trains I used from the US, Amtrak an Canadian packs.
by teccuk
Hey guys, nothing much more satisfying than seeing other people enjoy it too! I quite liked this one, and its very pretty

The ironic thing is, judging by the screenshots, your all much much better at the game then me! My trains get lost, my tracks get congested, my passengers leave, my industries stop producing... quite funny really.
by Samo
well, first, i must say that this is a great map, awsome for plastik's trains

on a second note, i'm not a huge fan of the food industry, so i hope u don't mind but i converted it to a steel production map and had it start in 1900. but other than that and adding more trains and stuff, great map, hope this isn't the last from you.

teccuk wrote:Hey guys, nothing much more satisfying than seeing other people enjoy it too! I quite liked this one, and its very pretty

The ironic thing is, judging by the screenshots, your all much much better at the game then me! My trains get lost, my tracks get congested, my passengers leave, my industries stop producing... quite funny really.

I got one tip for you for helping that you're trains won't get lost.
Most people give a train an order to go like this : (example)

When you got a mega track situation the best thing to do with the orders is to start giving you're orders like this :

The best way how this works is when you make use of double track lay out. Please don't ask me why this system works bettter I just used this because I had the same problems with trains getting lost. Even when these tracks are the first one to be build I use this type of orders for trains because later on in the game you might wanna use a part of this track for an other route of an other train wich is connected via an other track. So the best thing to do is to give the new train orders and using the option "route through waypoint (nr)", if you make use of more trains on the same routes then make sure that the "route through waypoint" marks come after a crossing or change of direction.

If you still don't know what I'm talking about please say so because then I will give you a better explenation via a few screenshots.

by Emperor Darth Sidious
The double track layout as simple as it gets with only two trains on two tracks. If it is a larger network and if you have more trains on this line perhaps Train 1 and Train 2 need new orders so that they will follow there own line. In a later stadium of the game you may have to give extra orders to train Train 1 and Train 2 to keep them on there tracks and then the won't get lost.
by Illegal_Alien
Hey a train made by me

by Emperor Darth Sidious
That's right Illegal. I just downloaded it from Ami Trains. I already had the Shinkansen 500, and I didn't know until now that the Shinkansen 700 was availeble as well. That I used this one for the "train orders example" is no coincedance because I like the Japanese trains and I wanted to see this in the game. So this is the first screen that I made using the Shinkansen 700.

by Railwaymodeler
I enjoyed the scenario. Even more with the US and Amtrak Packs. I found I could build trams early on, and supplement them with mail trucks around the cities. This worked pretty well to win, actually.
by LocArny

Illegal_Alien wrote:Hey a train made by me