I decided to go back to work on fences. That's what I've got so far:

mph wrote:(its a little bit like my railway fences. I've been trying to get round to using a fence like that for a building for ages!)

Yes, your fences inspired me to create these. Plus I always liked the mesh fence in Rollercoaster Tycoon, so I wanted to do one here.

I don't think it's good practice to let the bus station roofs go round the corner, as the originals have that same kind of setup. Same for a possible building. Why would one need a building on a bus stop anyway, when there's already a thing that could be a timetable or a ticket machine

The shelters look good on drive-thru stops. At least, the sprites look good. They still have to be coded before I can see them in game; I'm not mocking everything up.

I added streetlights to the truck station. I think it looks much better now. A sign would probably do too, but as I already had this one made, I'll show this first. Streetlights also give a bit of height, without obstructing view too much, as opposed to a sign. I think this does just fine.

@Soeb:
Hey, those fences look like mine (which on their turn look like mph's)!
Try adding some more random pixels. They look very clean right now.

Very nice bus and bus-stop and loading-bay FooBar.
But I do think the busstop needs some work on the fence (is it company color?), it looks a bit low.
I also would move one lamppost next to the shed and maybe place some wooded boxes piled up next to the loading area.
Top

With lamps it do look better.
Top

Well, that's a bit too random

At first, there might not be much difference, but when you look closer, you can see that the graphics aren't a 100% 'clean'. They're a bit weathered, with some pixels a couple of shades (not too much!) off. This gives this a textured look, which you can also see on the truck station: it's not one colour, and it's not a gradient.


EDIT:
How's this for the truck station?

I have been doing some work on the train wagons ready for converting my generic road vehicles - what do people think?

*edit* they are looking quite "flat" in-game, any tips or tricks on improving them?

nice, looks just the way I had it in my mind

I worked a little more on fences:

Zephyris wrote:The reason the maglev looks underground is because the edge of the platform has a fainter white line than the original. The dimensions of the new platform are the same as the old, but ...

The placement (xrel, yrel) seems to be a bit off. Compare the train position on the monorail (green) in the two parts, and you can see that in the new station the train is driving beside the track. The same goes for maglev, but isn't as visible. 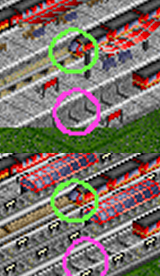 I'm not sure how true to the original game you want to be. I think fences like those are more realistic, but i would have thought that for this project your other ones would be more appropriate. If you do want something more like this- you can use my ones. (or edit them if you like). I'm not sure about the company colour posts in yours. I haven't seen them in game though.
previously known as daylight
Top

Trying to be useful: Some box cars and tanker so far unused may be found http://www.tt-forums.net/viewtopic.php?f=26&t=26573 here.
I like to look at great maps and see how things flow. A little like a finished model railway, but it is evolving and actually never finished. http://www.simutrans.com
Top

I've not been entirely sure whether I think they are good or not. Having looked at some screenshots of the new industries, Im not very keen on them. I think there may be a few bits of them that need polishing, however, the biggest thing that I think needs attention is the windows. They don't look very lifelike, more like blue squares stuck on the building.
Zephyris, I'm not sure if they are still WIP but if you want me to have a look at them, drop me a PM.
Top

For me, Zephyris' wagons are GREAT!

They look hmmm... clearer than original ones, I can't find the word to express my feelings properly 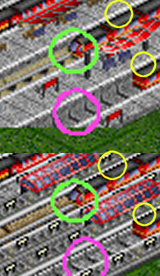 I don't see any problem with them, they look very pretty, at least outside from the game. Do you have a screenshot of them in-game?
Top

New version of RoadDepots!
Now includes different sprites for Arctic Climate. CC in arctic is all around, to make some people happy!

NOTE: The grf will not change the depots in Tropic Climate. This is intentional.

Also fixed a typo in code of Toyland RoadDepots.

What about Tram depots? Are the addons in OpenTTD extra grf new artwork or copy-paste from TTD sprites? 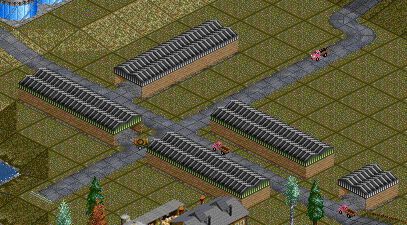 This all looks wonderful, great work guys!! Look forward to seeing more of it

“Blackmail is such an ugly word. I prefer extortion. The ‘x’ makes it sound cool.”
Top

I'm very much interested in helping to design everything, i also tryed a year ago but then i didn't have enough time, Purno provided me with tutorials and stuff and worked a bit with those

now i wanna contribute and i hope someone can gief me something to and point me in the right Direction.

i still have purno at msn i'll contact him thru that also.