So... I am making a map, possible because of the new height limits (I started it in 2014, before the height limit increase, result was super crappy and I gave up, now I am trying again).

One thing is bothering me is that my map to look good would require diagonal rivers... and seemly those doesn't exist (yet?).

I am a professional C++ coder, so if I decide to make a patch, would it be allowed? And what I would need to do?
Top

When it comes to graphics issues:
OpenGFX + Landscape has diagonally rivers. 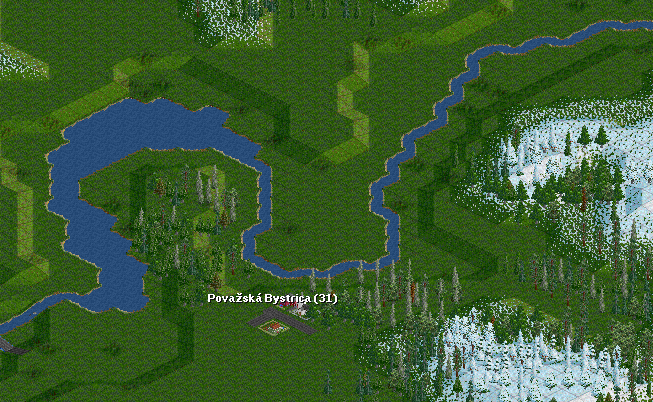 Regarding diagonally canals:
I haven't seen it anywhere, but I have pre-made such graphics.

I could finish them, but I would need a template that I couldn't find. This is nothing special, it would certainly be more difficult to code it, although it might be possible to adapt the code for diagonally rivers from OpenGFX. This code is not perfect, not everything looks good (especially wider rivers and lakes) so it could be improved a bit. As for the river graphics themselves, I also have their improved version.

They're not perfect, but at least you can't see those horns.

Regarding construction of diagonally rivers and canals:
I have graphics for the construction of such elements. This is also nothing special, but it might be useful (or maybe not). Most of the graphics I did about a year ago, when I was working on a map, where there were a lot of such diagonally rivers - building point by point was a arduous. I wanted to post a suggestion to improve the editor, which would be very useful...

Edit: I am not entirely convinced to change the graphics in the main version of the game. But it can always be an addon or even a new base graphics set.
Top

LaChupacabra wrote: ↑
19 May 2020 16:26
Edit: I am not entirely convinced to change the graphics in the main version of the game. But it can always be an addon or even a new base graphics set.

These would be a great contribution to OpenGFX+ Landscapes.
Do you like drones, quadcopters & flying toys? Check out Drone Strike Force!

I always wondered whether that should be done - and it definitely is a good addition to OpenGFX+Landscape. And tbh, I forgot why I didn't include the diagonal rivers in the OpenGFX base set itself... or if it was just lazyness and/or a desire to keep one unique feature to OpenGFX+Landscape or some technical limitation for base sets.

The source of OpenGFX+Landscape is freely available under GPL v2+. You find the river (and canal) code at https://kallithea.openttdcoop.org/ogfx- ... ivers.pnml - I might soonish migrate that to a GitHub repository.

I have been toying with diagonal rivers using newobjects since way back in TTDPatch days. One of the advantages of TDDPatch is that it used the same "water" for seas, rivers and canals. With this, one could use diagonal steep slope sea tiles as <groundsprite> and draw a diagonal half steep slope/half river tile as a <buildingsprite> for some interesting canyon/fjord effects. Unfortunately this is not currently possible with OpenTTD.

planetmaker has done some amazing Action5 work with OpenGFX+Landscape but to be honest, this should be generally available throughout the game (steep slope/water included). I took a look at his code a while ago and to be honest I found it to be quite complicated. Perhaps I need to take another look at it when I complete some of my current projects. The pity is that it is currently a GRF solution to add to an existing feature. Hopefully somebody can develop a way to expand the feature itself.
wallyweb on tt-forums: Screenshots - Projects - Releases
wallyweb on Simuscape: Projects - Releases
Other Stuff: TTDPatch 2.6 "Nightly" download - cirdan's OpenTTD branch (New Map Features)
Screenshot Of The Month Contest Winner: August 2015 - Tied May 2016 - January 2018 - December 2018 - May 2019
Top
Post Reply
5 posts • Page 1 of 1