You forgot to show the feature video of this patchpack, really interesting!


I am trying to compile on linux, if someone can help to make it work, it fails (I'm not a programmer, dunno how to do it):

I'm getting this now compiling on linux, if someone can help... I'ill compile on linux and post the binary.

Hello Keldor,
I have more than one error, the original source code from your trunk, after ./configure and make the following errors occur: 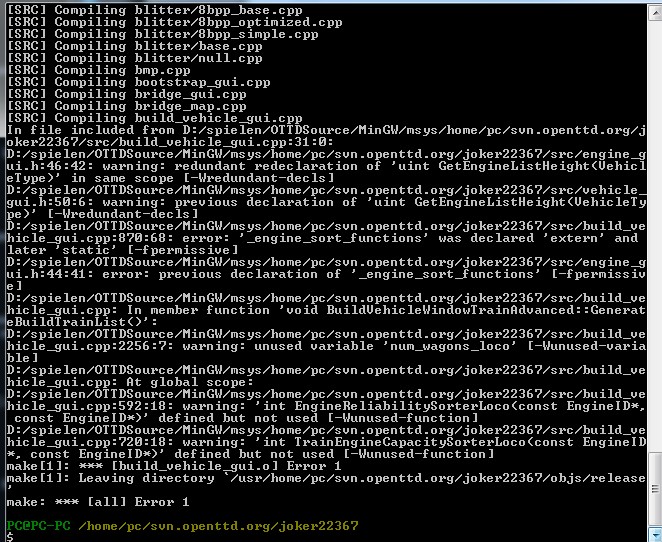 As I mentioned, I haven't tested any other platforms or compilers. If you can figure it out or fix it go ahead. But I can't maintain different platforms and compilers for this, I don't have the time.
Top

Streckenläufer wrote:Hello Keldor,
I have more than one error, the original source code from your trunk, after ./configure and make the following errors occur:

I've had the same problem, and googled it, after that more 5-6 errors came... then I stopped at my post above yours... need to change something more complex for me, so I'm waiting someone to figure out

don't have the changed files now, tomorrow I can send you.

@KeldorKatarn Found a bug, if drag the new semaphore to a bridge (possible tunnel too) openttd crashes.
Top

Thanks I'll check for that.
Top

Fixed the logic signal dragging issue and also fixed another problem with them not evaluating and setting states correctly.
Top

Hi,
Great pack, but I do have a request
Could you add the Terminus Airport Patch and extra large maps patch?

where is the station rating adjustment setting? i cant find it and with the original rating system the game is unplayable.
Top

For what it's worth: you need to add overlay_cmd.cpp to source.list, otherwise compiling from a fresh clone from GitHub fails.
Top

Now supports having 32 rail types active at the same time instead of 16. I found an unused bit on the tilemap structure.

@JGR, as always you might want to steal this one

The commits are are from the last two days, should be easy to track them down. I think it's only two commits. One adding the feature, one fixing bugs and making sure loading additional ones during a running game via NewGRF doesn't break everything.
Top

Are you still updating this patchpack? Love it btw.

Unknown Cause of Crash

Every time I open up my savegame I get the following message:

Could anyone please translate this into English? How do I fix this problem

Btw, my name is not Andreas, so I don't know what it is even doing there...
Top

It looks to me that you are trying to open a saved game from a patched copy of openttd in a trunk version and its attempting to call a function that doesnt exist in trunk.

Is this isolated to a single saved game file? Can you share it here?

Leanden wrote:It looks to me that you are trying to open a saved game from a patched copy of openttd in a trunk version and its attempting to call a function that doesnt exist in trunk.

The assert statement is really in a function that exists, or it would not get called and fail

@Translink:
Official openttd versions don't use "andreas" afaik (the path there is where the source file was located at the system while making the executable), so you must be running either a self-built version (unlikely, as you don't know where "andreas" came from, so it's not a file system path at your machine), or you are running a randomly downloaded openttd version from somewhere.

Assuming the latter is the case, I'd suggest you ask there about this problem.


For the future, if you use patched versions, please indicate that as such, so we don't have to reverse-engineer that information.
Being a retired OpenTTD developer does not mean I know what I am doing.
Top

I was actually referring to Trackfun.h

In any case, a savegame cannot call a function

don't worry, be happy and checkout my patches
Top

It's no fun, those tracks

Being a retired OpenTTD developer does not mean I know what I am doing.
Top
Locked
94 posts