, but I'm back now. So I'm going to port the patch to the newest version.

- A patched OTTD 0.3.5 which will have the patch disabled in network mode (So as to keep it compatible with the official OTTD version).

- A binary which incorporates all the changes of the nightly builds, and hopefully a network support for subsidiaries.

Here are some details for the planned network support, feel free to suggest anything

1. It will not be possible to create a new subsidiary in network mode (subs can exist only by buying out an opponent, which can be done as traskjd suggested). This is because OTTD allows only 8 players, and each sub counts as one player.

2. As in the single player game, subsidiaries can use another companies tracks and stations, however players cannot administrate other subsidiaries (I'm still wondering if this is a good idea, any insight on this particular point would be highly appreciated). This particular point means than the owner of a company which has been bought out keeps the ownsership of his company (which is IMO better to keep the game interesting for the bought out player).

3. Players can still transfer money, however any money request (as in A asks B some money) is subject to acceptation from the player playing the company which sends the money (so B is asked "Do you accept to send XXXX € to A" with a possible to increase or decrease the amout, and one to simply refuse the transfer). This makes sense only if point 2 is implemented.

4. To make this whole thing really usefull, have some kind of cooperative station and city ratings to virtually remove the competition between the subsidiaries, and make using subs financially attractive. (This one also needs some thinking, please just say anything that comes to your mind, even if it seems obvious: Any suggestion is usefull).

That's it, now the bug reports:

tgsc:It is normal not to see the new 0.3.5 menus/buttons in my patch, because it was made before those were added to the game. From what you said, I suppose the savegame you had a problem with was from OTTD 0.3.5, which might explain the problem. I'll investigate this problem anyway.

jake:Will it ever become part of OpenTTD? I was told by someone on IRC that one of the devs though this wasn't a good idea, but I was never told neither who nor why. But heck! This won't keep me from posting new versions on the forum...

, but I'm back now. So I'm going to port the patch to the newest version.

- A patched OTTD 0.3.5 which will have the patch disabled in network mode (So as to keep it compatible with the official OTTD version).

- A binary which incorporates all the changes of the nightly builds, and hopefully a network support for subsidiaries.

First of all, congratulations for your Ski instructor licence.

On the patch now:
Assuming that you'll post windows binaries, I would like to see the source posted as well...
I'm playing on Linux, and REALLY want to play this patch

Looks really great, but how do i install it?

(May be a dumb question but i am still an engineer ain't i?

LordOfThePigs wrote:Sure, no problem, I'll post both the binaries and SVN .diff file, as usual.

As I've pointed out to other people, a diff is not sufficient if you post a binary.
To get a good answer, ask a Smart Question. Similarly, if you want a bug fixed, write a Useful Bug Report. No TTDPatch crashlog? Then follow directions.
Projects: NFORenum (download) | PlaneSet (Website) | grfcodec (download) | grfdebug.log parser
Top

here'a an updated version. It's built against the SVN revision 1480. For some reason I have been totally unable to make it compatible with 0.3.5 for network play.

This version is just an updated version of my last post. I'll post a version with proper internet game support as soon as possible.

I won't post the full source right now, since this is just an intermediate release until I get the network to work.

Please report any single player bugs. These must be cleared out in order to have a consistent network play.

hi Lord of the Pigs,

I would like to do an german language pack, what do you need?
Bernhard

LordOfThePigs wrote:Sure, no problem, I'll post both the binaries and SVN .diff file, as usual.

As I've pointed out to other people, a diff is not sufficient if you post a binary.

A diff is perfectly sufficient because it allows people using any platform to try the patch.

If you need to compile it on Windows then read here: (Cygwin)

Edit: oh and by the way: This is completely redundant. Because SVN is being used, you can check out any version/revision you like, and since LoTP has told you which revision it is patched against, you can easily get the correct source code for yourself rather than wasting harddrive space on this machine
Top

Jango, I think his argument was

"What if the SVN crashes, I can't get the correct source code to apply the patch on." The case where they decide to discard some old revisions to save disk space on the server is also possible.

I think the argument makes sense for along duration project. But right now,everything works fine and it's easy to grab the correct source. If getting the correct revision becomes impossible, I'll post a full source code. But until then, a diff is enough.

Bernhard, i you want to create a german language pack, download the attached file and translate all of the english strings into german. Your next duty is to stay tuned on this topic and I'll tell you whenever new strings are added.

ok.
will do that.

Bernhard, now dowloand the attached file and extract it into your langs directory. You should then be able to play it in german.

Hmm, I'm not sure what's happened, but I loaded my main save game into the new subsiduries version and within a couple of minutes my trains started running into red signals. Here's a screenshot.

I have some problems with running your patch. I have OpenTTD 0.3.5 and everything was ok. I downloaded your patch (windows bin), unzipped and copied to my openttd directory. When I run ttd.exe it wants: TRG1R.GRF, TRGIR.GRF, TRGCR.GRF. I have this files but without last 'R' in the name. So I renamed this 3 files. Game started but it looks like on screenshot (this pink color arghhhh). Could you help with this? 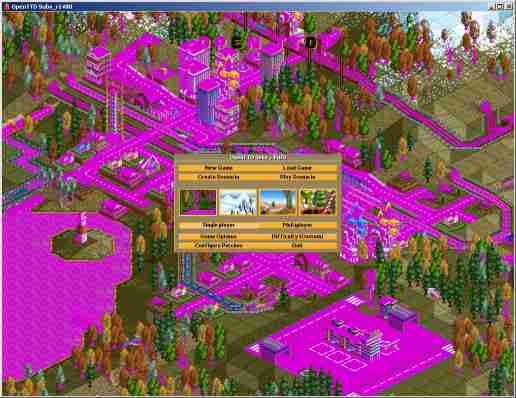 you are useing the DOS-grf's.

The win grfs do contain the 'r'.
Bernhard

Bernhard wrote:you are useing the DOS-grf's.
The win grfs do contain the 'r'.

Well ok, but openttd 0.3.5 works fine with DOS-grf's and this patch doesn't.

Maybe I can download win grf's from somewhere?
Top

Bernhard wrote:you are useing the DOS-grf's.
The win grfs do contain the 'r'.

Well ok, but openttd 0.3.5 works fine with DOS-grf's and this patch doesn't.

LordOfThePigs wrote that he has a problem with 0.3.5 and his patch is based on the svn revision 1480! unfortunately there is no nightly aviable with this rev. I will hope that the nightly with rev.1483 will do.
Don't you have the win-grf?
Bernhard

Now I have, thx a lot

LordOfThePigs: it's the best add-on to the original ttd, keep up the good work

PeteB, could you please post the savegame so I can look into this in a little more detailed way please.

When you report a bug, it's always preferred to post both a screenshot and the savegame. It's much harder to debug if I don't have the screenshot.


[edited 15mins later] Ok, I've been able to reproduce the bug. I'll take your case as an example for explaining the problem.
When a train passes that signal, the signal goes red (until then, everything is normal). But if the train chooses to get out through the green or the red exit, the signal on the blue line is not notified that the train has exited the block. This is probably due to the fact that your signals are all on different colored tracks.