For many years now we've used the cargo refit system to also double for livery refits. I have come to a conclusion that this really is not sustainable as NewGRF projects continue to evolve. For example, the CS Bus Set has dozens of livery refits for a single vehicle. Combine that with the ability to change graphics based on cargo size - such as adding additional vehicles or wagons as demonstrated in HEQS, and it's going to be a mess.

I would like to see the vehicle refit menu separated into sub-menus for liveries and cargoes.
Do you like drones, quadcopters & flying toys? Check out Drone Strike Force!

Well, could be useful in the future.
Špajdy | Slovakia | languages: slovak, eneglish | I code in NML |

This lacks pictures, and has too many words.

Implementing these improvements would certainly be very useful.

Sorry, I don't know how it is all encoded, but I have some ideas how it might look like as a result of the changes. It may be nonsense, but it may be useful after all.

It seems to me that my vision will be the closest to the description of the third solution.

Vehicle purchase window
1. If the vehicle has different variants for the selected cargo, an icon would appear next to that vehicle on the list, indicating the option to select a version.
2. Version selection could be made in:
A. An additional configuration window, very similar to the refit window (more on that below)
B. Vehicle purchase window - here you could select the main version, while additional options such as painting would be in the configuration window
In both cases:
-Double clicking LMB on the bar with the icon or name will quickly buy the vehicle in the default version (it is still possible to rebuild after the purchase)
-Clicking LMB on the additional version icon, RMB clicking on the vehicle bar or on "Configure and Buy Vehicle/Ship/Aircraft" will open a new vehicle configuration window before purchase.
3. In the case of vehicles having different variants, if the data differ, it would be good to show the data range for all versions and at least for the price. 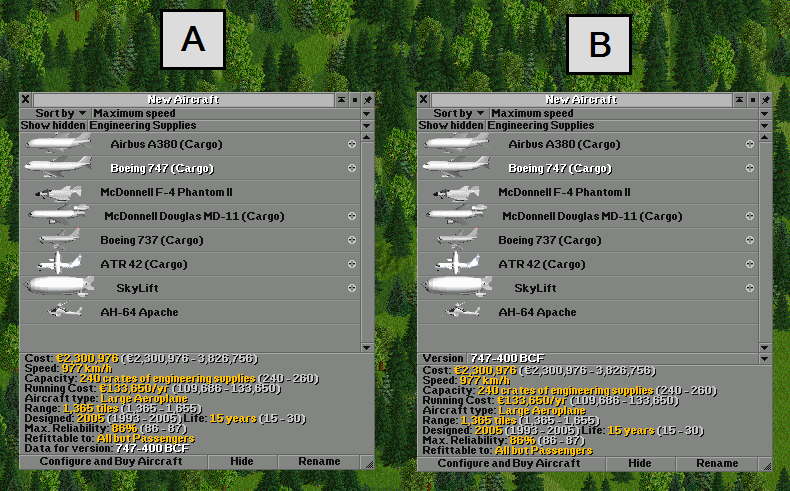 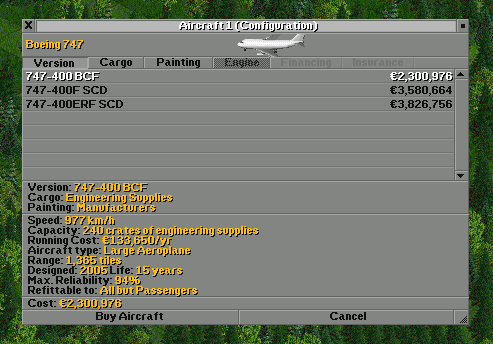 Configuration window before buying (rebuilding)
1. Each vehicle could be assigned several different conversion options that would be available under the tabs. The tabs would be placed side by side. In the case of a large number of tabs, they would be placed in subsequent beams. All options such as cargo, version, painting, load capacity, power, type of bodywork, number of trailers, financing, etc. should have specific identifiers, i.a., to replace vehicles and to maintain consistency between additions.
1a. In the case of older versions of add-ons, all additional conversion options would be available under the "Cargo" tab in the current form of a drop-down/collapsible list (+/-).
1b. The order of tabs should be constant for each add-on. If a given add-on or vehicle doesn't use extensive rebuild options, the additional tabs wouldn't be visible.
1c. Under the first tab - if the add-on would give you such a choice - there should be a choice of version, because the range of cargoes that the vehicle can carry depends on it. Only those versions that can carry the cargo selected in the vehicle purchase menu would be displayed. The Boeing 747 from the WAS set can be an example of the usefulness of such a layout. The choice of version would also be very useful in the case of trucks that may have different bodies adapted to different cargoes. An example is the Polroad, where each truck has several versions of the body. If McZapkie were to give each version as a separate vehicle, the purchase menu would be ridiculous in length. Another application of the version selection is the EMU and DMU unit trains. Some sets have any number of wagons. However, if the author wants to keep the actual sizes of such trains, having the option of choosing a version would be very helpful as very often there are several versions, which are additionally available in the colors of different carriers or regions. Incorporating this into the current layout would require creating each version as a separate train, which would also be a huge clog of the purchase menu.
1d. If the first tab is version selection, the second tab would be cargo selection. If there was no version selection, the cargo selection was the first tab.
1e. The further order of tabs is an open question.
1f. For the curious: The financing option would include a purchase
for cash or by leasing, where the price would be low but passed on to the maintain cost, which would be higher. The insurance option for an appropriate fee would change the type of aircraft from large to small.
2. In the middle of the window there could and should be information about the selected configuration
3. In the lower part of the configuration window, it would be good if the vehicle data was included. They can be all, or at least those that can change depending on the configuration chosen. Here, the author should also be able to write down additional information.

Vehicle replacement window
1. As in the purchase window, next to the vehicle name (if it has multiple variants) there would be a version selection icon - active or only informative.
2. The choice of the version would be similar to the case of purchasing the vehicle: clicking LMB on the vehicle bar means selecting the default version, and if it has the same variants, then the version with the same painting, power, etc. RMB click on the vehicle bar or on the version selection bar added below would open the configuration (refit) window.
I am sorry for may English. I know is bed.
Top
Post Reply
5 posts • Page 1 of 1