I think that the system's Save As dialog (on Windows) is much easier to use than OpenTTD's Save Game dialog, for a variety of reasons:

[*] In OpenTTD's Save Game dialog, I often accidentally click on "C:" at the bottom of the file list, bringing me back to the hard drive, and then I have to manually navigate through like 10 folders to get back to the folder where I originally was. This rarely happens in the system dialog, and when it does, it's not a big deal because the system dialog has a "back" button.

[*] The system dialog has a list on the left of folders that I commonly use, so it's easy to navigate to those folders in the system dialog. In OpenTTD's dialog, to do the same thing, I have to go to manually go to "C:" and then navigate though all the folders until I get to the one I want.

[*] In the system dialog, I can easily copy-paste the path of a folder into the address bar. I can't do that in OpenTTD's dialog.

These are just the points I think are the most useful, there are a lot of other things that are also better with the system dialog since it's designed to be particularly easy to use since most programs use it. So could OpenTTD please use the the system Save As dialog instead of OpenTTD's original Save Game dialog?

It would also be useful to use the system Open dialog, though I personally don't notice that as much since I've configured Windows Explorer to open .sav files with OpenTTD. But other people might find that very useful as well.
Top

Indeed, the current form of the game save and load window is not the best. Honestly, I don't know if anyone uses these shortcuts to other partitions / disks at all (?). It seems anachronistic to me and in 99.9% of the cases it makes no sense. The same is true for the (Parent directory) shortcut, which you can go outside of the Save folder. But for what?
Regarding the problem of the green link to the parent location, there was already a topic with a proposal to add a separator - apparently adding it would be quite troublesome.

Personally, to improve readability and avoid accidental clicks, I use fake lines, which are de facto save files with appropriately changed recording dates. I use the same method to separate saves for each years. 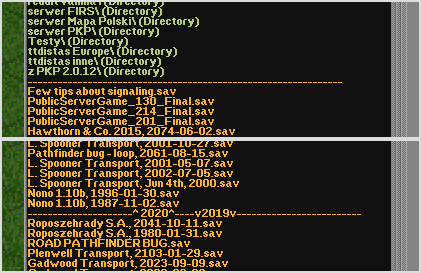 As for your proposal to replace the save window with a system window, it doesn't seem like the right way to go. First of all, the loading window could not be replaced due to the additional information and functions. Neither Windows nor Linux, I believe, will provide you with any information about the saved game, much less allow you to download the missing add-ons before loading the game. However, if only the save window was changed, in this case the player would have to use two different and inconsistent ways of viewing the content. This window is also used to select a scenario or a heightmap so the inconsistency would be quite glaring.
I also don't know if the change of the writing method itself would not be more entertaining than introducing a few most important improvements.

Another argument I would have against such a change would be the possibility of introducing additional information and improvements that would give the original window an even greater advantage over the system window. 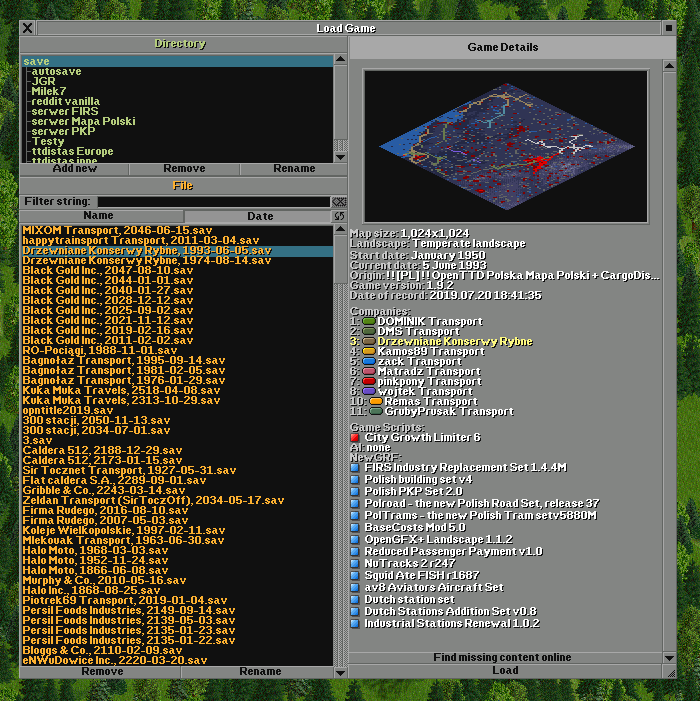 The left side of the window would mostly be shared by the save function. I will post a description with a few more changes soon (I hope)

Using the system Save As dialog is certainly possible technically (for Windows and macOS, and I suspect you could have a stab at it in Linux depending on the window manager used etc), but it would take the user "out" of the game (and in particular might be problematic if the user is playing full-screen). For loading, you would of course lose the custom information - this could be added for the Windows dialog at least, but would be a lot of work.

A basic load/save native dialog could potentially be toggled by a config option for those users who really want it. Improving the current dialog would be nice though.
Owen Rudge
owenrudge.net | Owen's Transport Tycoon Station | Owen's Locomotion Depot | The Transport Tycoon Wiki
Top
Post Reply
3 posts • Page 1 of 1