When I started playing OTTD I was convinced that towns just stopped accepting goods after a while. This is because every single town I used to sell goods would eventually stop accepting them, forcing me to build a new station at another town, where the same thing would happen again; lather, rinse, repeat. Now I know that it's actually towns tearing down old buildings to build new ones. The very growth caused by selling goods makes the towns stop accepting goods.

In normal maps it's not a huge problem since they'll probably build new, goods-accepting buildings eventually. In sub-tropical or arctic maps, however, it's a huge problem. I've had towns which repeatedly stopped accepting goods, sometimes for decades at a time despite constantly spending to build new buildings and setting up enormous road networks for them to build new buildings. This becomes almost game-breaking, since towns start so small and grow so slowly that you can run out of goods-accepting towns entirely.

In arctic and tropic climates it's especially problematic, because houses will either accept goods or food, never both, so as a town grows, the proper locations for stations might shift
You might not exactly be interested in Ferion, but if you are, have fun

It's a common (and reasonable) misunderstanding that delivering goods to towns causes them to grow.

andythenorth wrote: ↑
10 Jul 2020 05:46
It's a common (and reasonable) misunderstanding that delivering goods to towns causes them to grow.

Having trains making pick-ups and drop-offs makes them grow. So goods do make them grow.
Top

andythenorth wrote: ↑
10 Jul 2020 05:46
It's a common (and reasonable) misunderstanding that delivering goods to towns causes them to grow.

Having trains making pick-ups and drop-offs makes them grow. So goods do make them grow.

Unless you're using a game script which forces the delivery of goods, it's not the goods that makes the town grow.

It is the frequency of visits to any station by any type of vehicle. The cargo can be goods, passenger, mail, doesn't matter.
Do you like drones, quadcopters & flying toys? Check out Drone Strike Force!

The point is that you cannot deliver goods to a town without making the town grow, however slowly; and as the town grows, there is a chance that it will stop accepting goods.

However, the arctic and tropical climates offer a reliable solution to this problem. Pick a town that needs food or water to grow, and make sure food and water are never delivered. As long as these cargo types are missing, the growth will not occur no matter how frequently other types (goods, passengers etc.) are delivered, and cargo acceptance will not change.
Top

I could and should have written more clearly

As you point out, any cargo loaded/unloaded will cause town growth https://wiki.openttd.org/Town_growth#Town_Growth

How about not delivering the goods to the town? Then the acceptance doesn't matter.

You can grow the town instead with passengers/mail.

Just make sure your station covers enough houses. I played a lot of citybuilder games in arctic and tropic but don't remember losing acceptance ever being a problem. Getting acceptance of food from a tiny town can be be an issue, but in non-cb games it can easily be solved by funding town few times until in grows enough houses (funding completely circumvents all growth requirements).
Top

A very long time ago, I wrote a patch to :
- forcing cities to have at least one church
- forbidding cities to destroy churches
- allowing them to build at maximum 1 church per 1000 inhabitants

This wasn't very hard to write (but did interested noone).
I think a such patch could forbid cities to destroy buildings that are actually deserved, or at least forcing them to replace it with a new similar building (same acceptance or better).

IRL old city town center remains most of the time with old building, the inhabitants don't destroy their house/shop/office every 10 years...
Top

every building has a "lifetime" until it gets renewed/replaced. you can simply increase that.
You might not exactly be interested in Ferion, but if you are, have fun

I created a NewGRF house replacement set that uses default graphics and aims to fix many of the problems with towns, including protecting goods-accepting buildings from demolition when they’ve received goods in the past month, lengthening the minimum lifespan of buildings to prevent the rebuilding churn, protecting churches and other landmarks like stadiums, 2x2 shopping centers, etc, from destruction, and ensuring that every town has at least one goods-accepting building to avoid breaking town growth scripts.

The set is temperate-only (no snow sprites) and has other game-changing features so it’s not a universal solution, but could be an interesting demonstration of how some of these problems can be solved.
Improved Town Layouts | Improved Town Industries
Top

I am sorry L.Spooner but you really have unusual problems.

Personally, I have never had such problems with the acceptance of goods for default buildings. Really, either you are building stations somewhere on the outskirts of cities, where in fact the city may stop accepting some goods, i.e. you are asking for problems yourself, or you are using some faulty newGRF with buildings where acceptance of goods is sometimes limited to several types of buildings (which is clearly a fatal solution). Currently there is such a problem with UK Town Set and Improved Town Layouts - there it is indeed a real and often very irritating problem. Overall it's a problem of add-ons, not the game itself.


2TallTyler wrote: ↑
10 Jul 2020 18:12
I created a NewGRF house replacement set that uses default graphics and aims to fix many of the problems with towns...

Unfortunately, but current version of your set doesn't solve this almost non-existent problem, but actually creates it. Acceptance of goods or food is very limited. Once I had the situation that in a large city (+8000) there was not a single building accepting goods! Apparently, I accidentally deleted the one which accepted them or disappeared before the first truck arrived. Therefore, really, acceptance of such goods should be assigned by area and not individually to selected buildings. Alternatively, the set should have buildings-enterprises that would not be deleted.

You're right that it's not a problem on regular maps, but in arctic or arid maps it is a serious problem.

Additionally, since we added the 16 cargo types in/out for industries in 1.9, it's actually also been possible to specify up to 16 accepted cargo types for houses! So you can absolutely make a NewGRF that makes central zone houses accept both Passengers, Mail, Goods, and Food. And could even have them accept Water instead, removing the need for the water tower industry.
Top

Personally, I have never had such problems with the acceptance of goods for default buildings.

Black swan fallacy. Just because you haven't seen it doesn't mean it's unusual. You might just be unusually lucky. Maybe buy a lottery ticket

I have regularly seen towns stop accepting goods due to construction of new buildings. It will particularly affect single-tile truck stops

This is why FIRS specifically includes industries for towns that accept goods or similar town cargos. These can't be replaced by the town.

L. Spooner Inc wrote: ↑
11 Jul 2020 00:53
There are no other towns within any reasonable distance which accept goods.

This game just requires a lack of reasonable. So just send this goods as far as you can.

Then you will become really rich.

...
This is why FIRS specifically includes industries for towns that accept goods or similar town cargos. These can't be replaced by the town.

I just have a completely different style of play, thats why I really didn't have too much opportunity to notice.

[offtop]
These stores are good, and they would be even better if they had limited acceptance depending on the size of the city (it probably would have to be a set of buildings with shops) and if they were always optional or obligatory in cities with a certain population. Division into small and larger stores would not be bad either.


Ok, there is a problem, even two... or three, but generally one.

1. Buildings that should accept goods but do not
It seems that one of the buildings in the Arctic climate should be assigned some acceptance of goods, as indicated by its name, location and similarity to another building of the same type, but there is no such acceptance. 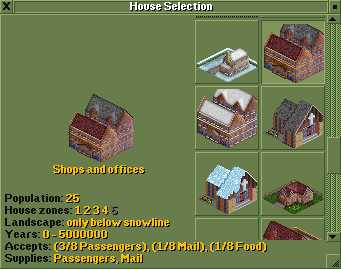 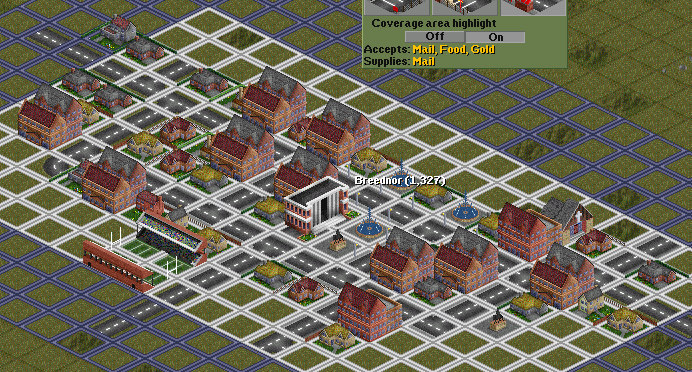 I don't know if it will be justified to make changes here, because it can be done through newGRF. Anyway, adding a certain acceptance of 1/8 or 2/8 goods for this building will not significantly and most often in no way affect the current gameplay, but it would remove the problem of disappearing acceptance of goods, which is caused by the fact that often buildings accepting goods are just being replaced the building that doesn't accept them. The change could consist in adding acceptance to this building and at the same time reducing it to others so that the sum would remain at a similar level.

2. Buildings accepting goods are replaced by buildings not accepting them
This is the main problem here. If the city would not previously accepted the goods, L. Spooner (or any another player) would not have built a line to this city but to another and there would be no problem. The solution could be point 1, but one could also add the rule that a building accepting a load cannot be replaced by one that doesn't accept it. However, such a solution could be limiting for new concepts of city development in future, that's why it seems to me that if you will want make any changes, those from point 1 seem optimal.

3. The lifetime of buildings is extremely small.
Barely something will arise and it is already changed into something else. Such a continuous change of buildings doesn't affect the size of the population, but it can affect the acceptance of a cargoes in a given place.
I am sorry for may English. I know is bed.
Top
Post Reply
16 posts • Page 1 of 1