I would like a feature where each station can be configured to have 'terminals'.
Each terminal would have it's own passengers/cargo waiting.
Then when configuring vehicle orders to the station you can chose to transfer to a particular terminal if you wish.
You can also configure, if you wish, vehicle orders to pick up exclusively from one of the terminals.

This is similar to having two stations in one (for the purpose of orders and cargo/passenger waiting lists).

This can prevent the problem of a vehicle transferring passengers to the airport from picking up passengers waiting at the airport which didn't arrive by plane.

It is possible to do this by having two airports next to each other but it would be better if they were different passenger terminals(areas) within the same airport. As otherwise it requires the aircraft to land at one then take off go to the next.
Top

If you just want to fill the airports using feeder services, this can be achieved by ordering the feeder vehicles to transfer and leave empty at the airport. This will work only if passengers are accepted at both airports.

Something similar to the two-terminal scheme you described can be implemented with a single terminal (that is, an ordinary station). Both planes and feeder vehicles would have separate orders for unloading and loading, with another order between them (such as a forced maintenance). However, this would work as intended only with very precise timing of every route, and the slightest hiccup in the feeder services can break it.

If your goal is more realistic travel routes for passengers, just use Cargodist.

signalsrule wrote: ↑
10 Nov 2019 13:35
It is possible to do this by having two airports next to each other but it would be better if they were different passenger terminals(areas) within the same airport. As otherwise it requires the aircraft to land at one then take off go to the next.

That's a nice idea for a feature — allow planes to taxi between adjacent airports.
Top

Yes, I wanted to fill but also take without taking the same exact cargo I just dropped off.

The 'transfer and take cargo' cannot do this sadly - the train just drops its cargo and picks it up again. A useful feature might be 'transfer and load any cargo where the original cargo source is not in the train's order list'. In other words - as the cargo waiting knows the original source station the train could not load the cargo if its source is in the train's order list (to stop it going back to where it came). However you still can't really force the cargo in a particular direction with this if there are many feeder services to the airport.

I'd like to chose where the cargo goes, which I understand can't be done with the cargodist feature.

The extra service order doesn't sound easy to work. The taxi between two touching airports is an interesting concept - however that would I guess allow you to create large airports by just joining smaller ones.

I attached a picture of the kind of airport I currently have if that makes it easier to see what I'm doing - would like to go down to one airport really and have all ariving cargo from non-planes to go on to a plane and all arriving cargo from planes to go on to non-planes. So far this is the best way I can do it - with two airports acting as one. 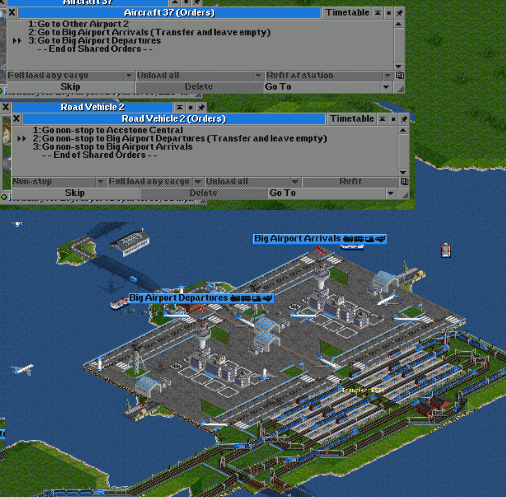 signalsrule wrote: ↑
17 Nov 2019 11:04
The taxi between two touching airports is an interesting concept

out of all the different ways to handle this "i want a transfer station, but not cargodist" dilemma, this is probably the most complicated suggestion i've seen over the last few years
You might not exactly be interested in Ferion, but if you are, have fun