So, I have no idea if it's been suggested before or asked about (I did a quick search but didn't find anything).

Would it be possible for renamed vehicle models to be company-side instead of game-side?
Right now if you rename a vehicle model it gets renamed for everyone, not just for the company that renamed it. Would changing this be possible, or not?

To clarify, I'm talking about renaming in the build/purchase menu, not the consist renaming thing. See the image as an example. 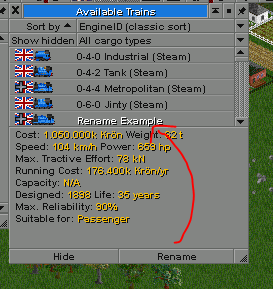 From what I've tested, no. If I rename something as one company in Multiplayer, it also gains that name for other companies. 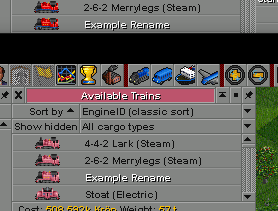 Red is host, they renamed the vehicle. Pink then gets the vehicle's name too.
Capture2.PNG (13.7 KiB) Viewed 662 times

...in fact, if a non-host tries to rename a vehicle, they get kicked, apparently for using a server-only command.

Personally the ideal way this would work is not as how you described it, but close. You'd see other people's vehicles named the way they named them, to allow people to customize their companies just that little bit more.
Hi~
Top

sounds to me like renaming shouldn't have been possible in multiplayer in the first place, but it's probably a rarely used feature and wasn't noticed that it's broken.
You might not exactly be interested in Ferion, but if you are, have fun