I checked the common suggestions and couldn't find anything, so here it gioes:

A part of the map generation that has been bugging me for years is the fact that rivers have the same level as the surrounfing land. While this might be true to real life in some cases like flood endangered areas, most river surfaces are lower than the land surrounding them.

I guess it would be very hard to change the map generation (correct me if I'm wring), but I still would like to suggest "low" rivers, screenshot attached.

Right now, this is only possible by painstakingly building an entire map by hand, which can be quite cumbersome.

What do you think?

Tricky one. On some level I'd agree.

But most bridges as far as I'm concerned do have a bit of a slope to them, if only because it increases stability compared to a perfectly flat one. And in OTTD you basically only got "extreme slope or perfectly flat". So since neither case quite hits the spot I'm not too upset about erring on this side of the problem.

The other "issue" of sorts is that while sea-level water "flows" like proper water with rivers, well, the don't really follow the landscape. So in corners and so on you got those effect as visible in the screenshot, where pieces aren't properly covered in water. Now that's again also not something that doesn't happen irl but imo it'd still need some rework on how river graphics work.

Which would mean extra work in addition to redoing the map generation.
Top

maybe another solution is to make some new graphics for the rivers ?or to allow the game to propose different kind of rivers ? something like track type or road type...(i m now running to hide myself xD)

here is a screen of what i use to make it visually lower (newgrf still in development), makes the river not usable by ships...unless the river is 3 tile wide (those are newobjects)

there are two problems with sunken rivers

There's also an issue of scale - in OpenTTD slopes are steep, where with most rivers the slope next to the land is much more gentle.

I think a solution would be another revamping of OpenGFX's river graphics so that they give the illusion of a gentle banked land next to the river.
Do you like drones, quadcopters & flying toys? Check out Drone Strike Force!

Hello all and thank you for your input!

@Pyoro:
It is true, OTTD only offers the choice between 1 and 0 in geographical terms. I still think that flat bridges and sloped riversides are more pleasing to the eye. Maybe Instead mountains and slopes would look more realistic if levels change in increments of 2 instead of 1 more iften? Sometimes I miss things like valleys etc.
And yes, I specifically showed the changing of the river into a 2-tile river (Bigger rivers are also seriously missing in this game!) to portray the wird 90-degree angled rivers and how badly they fit into a natural setting

But apparently most of the criticism is about the implementation and implication to the currenct game and terrain generation; not the idea itself. Is that correct?
Top

I would like erosion events to occationally occur in the game. See the following screenshot where the rivers have undergone 0 to 4 events:

The map generator could apply a lot of erosion events (configurable amount).

Delta formation could also be applied (possibly linked to erosion): 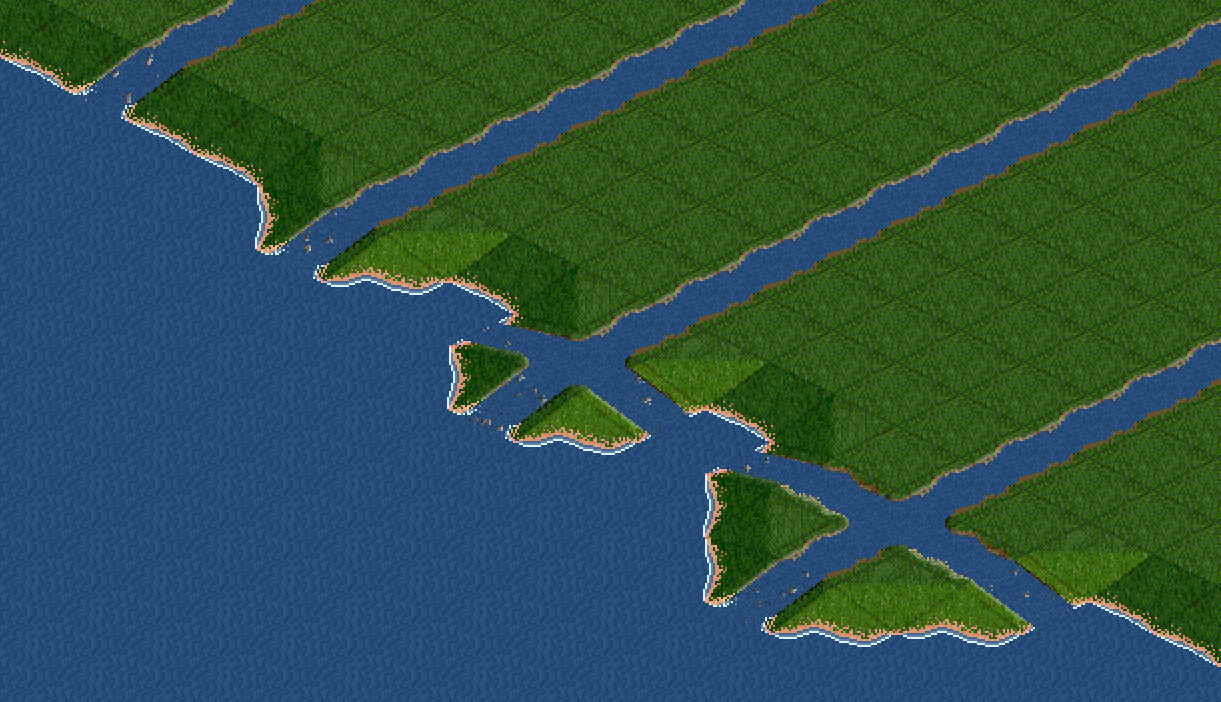 openttd_erosion.png
(104.53 KiB) Not downloaded yet

openttd_delta.png
(75.21 KiB) Not downloaded yet

Honestly, between "nice river banks" and "erosion" and wanting wider, diagonal and navigable rivers, I think we'd be better off deprecating the "rivers" feature altogether in favour of sea-level terrain-generator carved channels.

I'm on the opposite end. I want better usable rivers. I want to be able to include them in the elevation changes and have them flow more naturally with the landscape. We need to be able to put docks on them without the ridiculous-looking slopes we already use for seas (or we need to re-design river graphics to look deeper, I dunno). They need to be wider to properly accommodate two passing ships.

Water Way Roads is an interesting alternative to canals and rivers. I like that you can have vehicles which transition from road to water, I like that it's NewGRF controlled so creators can have different types of tiles not only for decoration but for function. The natural river tiles could be slower than canals, and they can be more nicely integrated into towns. But the big downside is that because they are roadtype, traffic mostly flows bidirectionally and vehicles are not able to freely change direction like ships in normal river tiles can. For wide rivers using this technique you'd basically need to use a lot more intersections, and you'd have to create some easily visible way to denote this (bouys as corner pieces? I dunno?). Another small issue is that traditional OpenTTD ships can't use them, but I have no problem with making sea ships and river/canal ships two separate classes. I don't think it would be too difficult to modify the OpenTTD water menu to accommodate both. It might be harder getting OpenTTD players to embrace this.
Do you like drones, quadcopters & flying toys? Check out Drone Strike Force!

I'm not sure about that. It seems like everything you describe, except elevation changes, is best achieved by simply using sea water.

As you say, narrowboat-style industrial canals can be best represented by roadtypes now. That leaves big ship canals - and surely they're best if they require serious planning and earthworks to accomplish, rather than the half-baked ships-can-climb-mountains canals we currently have?

PikkaBird wrote: ↑
16 Jan 2020 07:31
As you say, narrowboat-style industrial canals can be best represented by roadtypes now. That leaves big ship canals - and surely they're best if they require serious planning and earthworks to accomplish, rather than the half-baked ships-can-climb-mountains canals we currently have?

Ships can't climb canals or rivers without a lock, which has always annoyed me, but now that we have a way to make more sensible lock-less rivers via NRT for smaller boats, I can be happier with that compromise.

I like the current OpenTTD rivers for one particular reason, that's because they help make maps look more natural and provide you with a natural barrier you must overcome. Destroying rivers should not be cheap, which mostly requires you to bridge or tunnel around them. And in nature rivers are super-abundant, so it's an issue that we deal with all the time.

Pondering more on the issue, I think it could be a neat idea if one could convert a river into a NRT-river (or the reverse) at zero cost. But to upgrade to a canal of either type, or a canal of one type to the other, or to remove a canal, it would incur a construction cost. That would give players more flexibility in its usage.
Do you like drones, quadcopters & flying toys? Check out Drone Strike Force!

All rivers only at sea level? That would be a terrible idea. Many maps would then look comical or have to remain without rivers.

What's wrong with the canals?
I am sorry for may English. I know is bed.
Top

Regarding canals ...
As for their "squareness", I drew their diagonal versions. The code to use them exists... 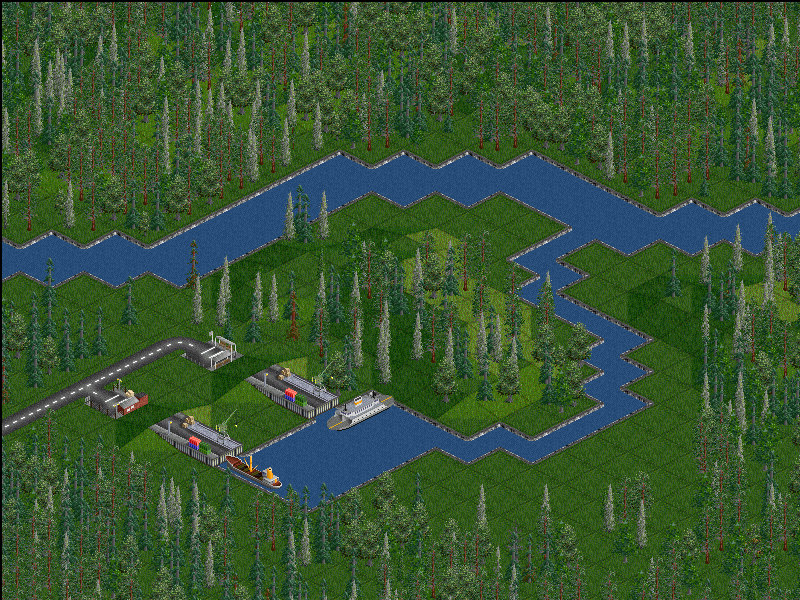 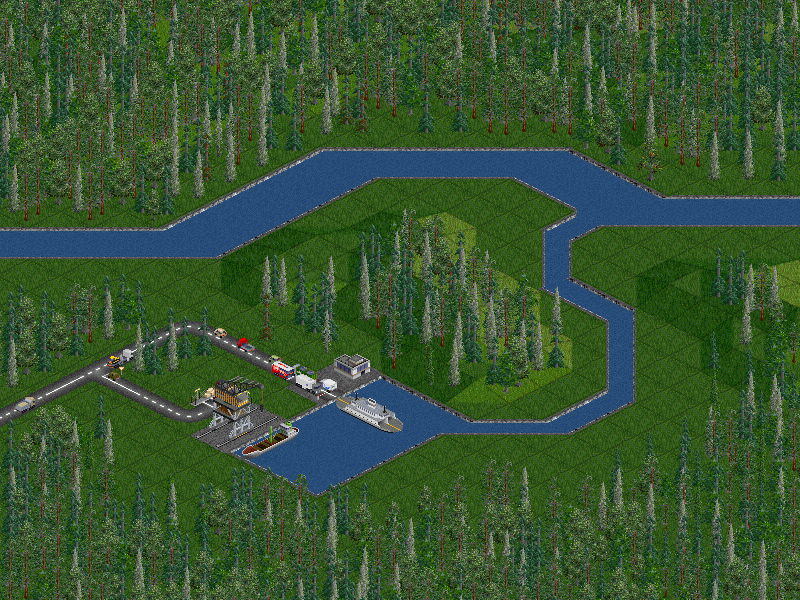 All the suggestions about bank erosion, deltas, flooding etc. have a common problem: OpenTTD has no such concept as a direction of river flow. Basically, a river is just an unowned canal with a "natural" look, and there is absolutely no distinction between a river tile and a lake tile.

Of course, the map generator must calculate the flow somehow in order to generate more or less realistic rivers, but that information exists only while the generator is working. There have been proposals to improve the generation algorithm, but this doesn't solve the main problem. You could make the rivers look as if they flow upwards, and that would still be a valid OpenTTD map.
Top

Well, there's still plenty of room for more data in the map array for water tiles. Storing a flow vector would not be impossible. It could also make it possible for rivers to re-flood terrain, if players interrupt them.
Top

In my opinion, the main problem lies not in the way of storing the data about water flows, but in the fact that these data will have to be recalculated after every landscape change.
Top
Post Reply
17 posts • Page 1 of 1