I am trying to understand how path signals work. I have made this test scenario (see in attachment).

Question is, why both trains are waiting for free path? As far as I understood, each train should reserve highlighted (red & blue) piece of track and they should not interfere.

This only happens, when the middle trainstaion is connected from back side too (so it creates loop). If I remove the green highglighted connector, they don't wait for pree path and work normally. But the manual says, that trains should only reserve the path to the safe stopping point, which is the station. They should not care about what's after the station.

Can you help me uderstand this situation? Thanks

Have a look, basically the tracks need to be sectioned.

Althought have you any idea what happenned in my situation? (i would really like to have a full grasp of these path signals

thought that if station acts like a signal (because it stops the trains and forces them to find free path), it is also a safe point ... but since trains can enter station from both ways, it can't be safe .. that would make sense .. ok, thank you

The situation is that the train reserves the path not only to the nearest station, but to the end of the orders list as far as it can. Only signals or the end of the track can interrupt searching of the path.

If you want to better understand how path signals work, there is a useful feature to show them. 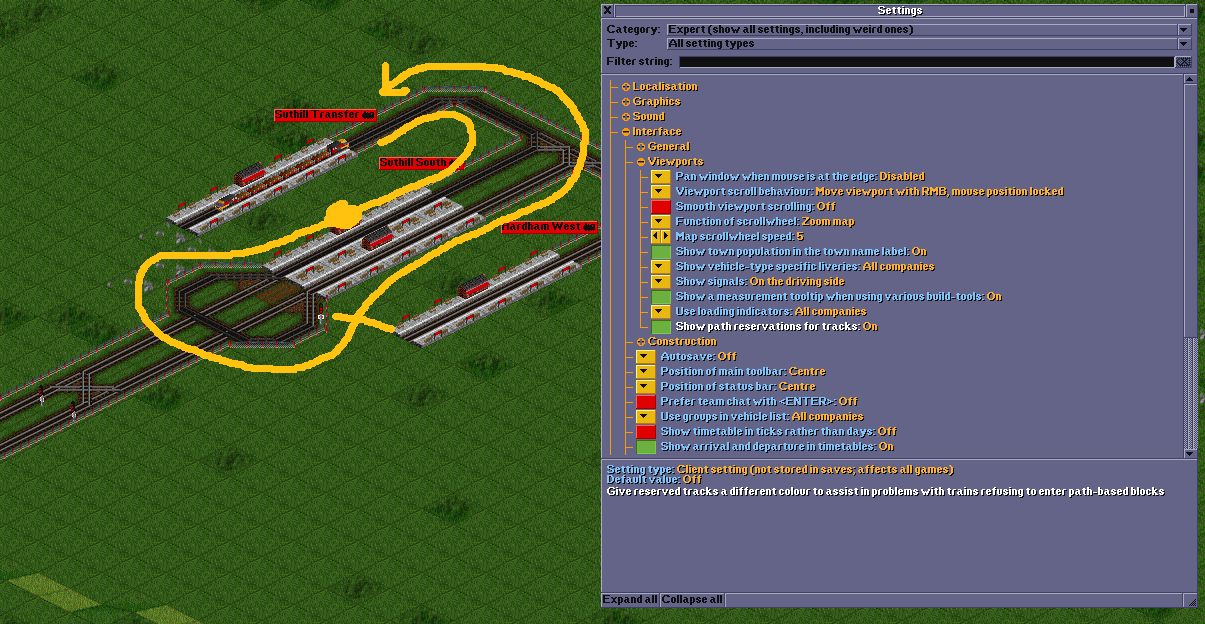 In the case you showed pathfinder without any signals restrictions, he also tried to search for the rest of the route, i.e. back to the first station (orange line), and he did so, but could not let the train start because the road to the first station was already taken, by some train - in this case the same train. It was enough to put up a signal to break the search and let the train move. Interestingly, after stopping at the second station, pathfinder will search the paths again and send the train the same way it came (unless the option to prohibit U-turns at stations was not enabled).

I think it has been explained by others but as I understand 'path' signnals they protect a path (section) of track and a train cannot enter that path (section ) if another train is on it or the train cannot find a path to the next signal without crashing.
Another screenshot, you will see a few trains on the crossing lines, they were allowed into this section because they could find a safe path to the next signal, if there is not a safe path the signals would not allow them onto that section (remain red)
I have included a save as an example, without any GRF's and three trains.

thank you, it's much clearer now, I can continue testing

I was thinking about some plugin that would highlight the track reservations, didn't think that it's already implemented in the game. That will help a lot
Top
Post Reply
8 posts • Page 1 of 1