A group of us tried a multiplayer game but after a while it became slow.

Does anyone know how much of an effect each factor has on the game, for a example:
- should maps be kept to a reasonably small size (how large can we get away with?)
- should we limit the number of concurrent connections?
- should we be more selective in which NewGRFs to use?
- is the problem more likely to be down to having a high number of vehicles in the game?
- should we avoid having large station catchment areas or train lengths? I understand these can make a difference, butninwoildnt have thought they would make much difference?

Is the issue more likely to be processing power from the host, or the clients? Or is bandwidth more of an issue?

Number of connections/players in the game has little effect, as far as I know, other than that more companies typically mean more active vehicles.

Some NewGRFs can definitely cost lots of processing power. However I don't have any handy list of "known slow" ones.

More vehicles = more processing (pathfinding) needed per tick, so yes that's an important factor. Previously ships and road vehicles could be really bad for performance, but since we added some route caching mechanisms in 1.10.0 those have much less impact than they used to.

Large stations or long trains should not affect performance significantly.


The performance of the host/server determines the speed the game runs at for everyone. (Clients run in lock-step with the server.) However, if there are any clients connected that can't keep up with the simulation speed of the host, I think they can end up being kicked out for being too slow.
Top

an important piece that often gets overlooked, is the amount of cargo packages travelling around on the map, especially when cargo distribution is active
You might not exactly be interested in Ferion, but if you are, have fun

By orange color I marked what may cause a significant increase in the load of the game and a decrease in its speed or the inability to enter the server.

Basically, the number of vehicles in the game is the most important. Also the number of elements that the vehicle has (wagons, trailers) have singnificant impact for the game speed. A lot more load will be caused by 100 trains with 20 grids length than 500 with a length of 2. There are also sets of trains, where each wagon consists of 2 elements, one of which is invisible - these are all wagons with a length greater than 0.5. Similarly with articulated vehicles. The speed at which vehicles move is also important.
In the past ships could actually cause a heavy load on the game, today it's much better.

What most affects the number of vehicles is the industrial set used and the way cities grow and how they generate passengers.
In the case of industry, unfortunately, but the worst in terms of performance is FIRS 3 and AuzInd. Both due to the very large production, which requires the use of a large number of vehicles. For this reason FIRS 1 is still used on one of the most popular servers with the map of Poland, which had significantly lower base productions. The newer version of the map will contain FIRS 3 but with the blocked possibility of new industry creation and manually reduced production of all over 300 enterprises - this is the only way to keep an acceptable game load with large number of players.
For cities, the basis is setting a linear method of generating passengers. A good idea is also to use one of the scripts that change the conditions of city development and slow it down, so that cities do not grow too much and do not generate millions of passengers at each station.

As jfs wrote, the third important factor is the map size - the indicated sizes (1024x1024 or smaller) are the most optimal.

Since version 1.9, a very useful load and speed measurement tool is available in the game, so you can check for yourself what causes the greatest load.

You can find them under the question mark icon 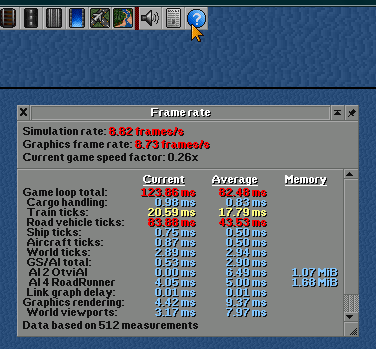 jfs wrote: ↑
30 May 2020 16:36
Large stations or long trains should not affect performance significantly.

I can't believe that you are writing it...

The number of wagons (elements) has a very large impact on the load on the game.


jfs wrote: ↑
30 May 2020 16:36
Previously ships and road vehicles could be really bad for performance, but since we added some route caching mechanisms in 1.10.0 those have much less impact than they used to.

Unfortunately, this doesn't work well. There is a bug in the pathfinder I wrote about earlier - it has not been eliminated.
Here you have to save with an example of a player from the Polish forum who had such a problem:

Look at the pink AI - it has 193 vehicles, and the game load that it causes is huge. You can ignore the lack of newGRF because it doesn't have much impact here. See what happens after removing this AI with its vehicles (repurchase of company does not help - it's pathfinder's fault not AI)
I am sorry for may English. I know is bed.
Top

While technically pretty much everything affects performance I'm yet to see a game that's lagging (in simulation) because of anything else than a large number of vehicles (~5000) or bugs.
Top
Post Reply
6 posts • Page 1 of 1