Okay, I have an odd complaint but one that can hopefully be solved easily.

I remember in earlier versions of OTTD it was possible to modify the NewGRFs in-game if you didn't like a particular set, wanted to upgrade it with a new version, or just play around with the parameters. It seems for some reason they've been locked-in once the game has been started.

What I used to like to do was put in redundant newgrfs and then remove them, thereby replacing the redundant grfs with the original grf locomotives and cars. This allowed me to play with the Pikkabird UKRS set and have the Manley Morel DMU, and the Dash DMU running around with the MetroCammel, SuperSprinter and Sprinter DMUs in the UKRS set. That wasn't all, I could play with the original buses (MPS Regal, Hereford Leopard, Foster and Foster MkII) along with the HOVS UK Bus set and those from the Cargo Set (RTL, and Park Royal).

I understand I'm using an outdated version of OpenTTD. I'd only be interested in upgrading if this issue with being locked-in with the newgrfs and parameters from the start, and the inability to load savegames from previous versions has been fixed.
I tried toying around with the newgrfs in my data, and ended up locking myself out of the savegames due to missing files. (Luckily I'd backed them up). 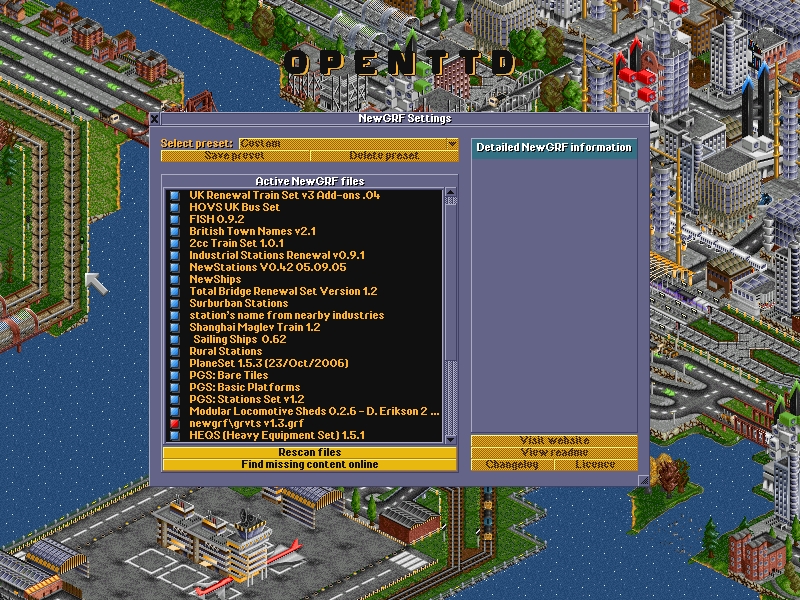 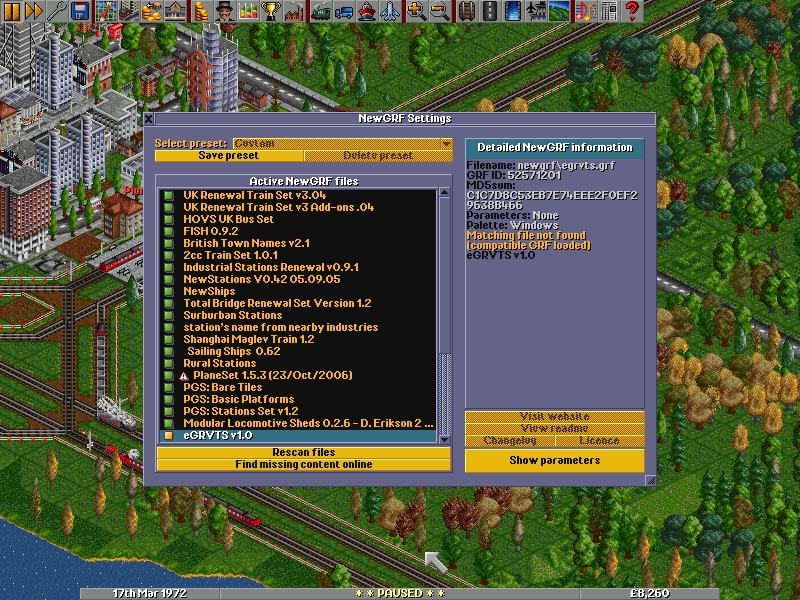 The ability to automatically do that in-game was removed because it causes games to become corrupt. Games can be corrupted in very large or small ways, and it may be immediately seen or it might not be detected until much further into the game. These corruptions are not the fault of bugs in OpenTTD, but the programmers were being drowned in bug reports none the less.

The bottom line is that modifying a game or a save in the middle of playing it is inherently unstable. The best practice is to set the NewGRFs you want to use before the start of the game and don't mess with them after that.

There is a way to go back and enable this ability. I'm not going to tell you how because, again, it's unsafe, but it is well documented in the forums. And before you enable this feature back, you are presented with a very large, prominent warning that by enabling this option, you effectively forfeit any further technical support or troubleshooting if you submit a bug report and it is found that you've changed NewGRFs in the middle of the game. Developers do not have time or resources to chase down issues caused because you intentionally corrupted the game.

Looking at the issues you've brought up, if you are using a NewGRF vehicle set that has replaced the original vehicles, you can download OpenGFX+ Trains or OpenGFX+ Road Vehicles. These are NewGRF implementation of the original vehicles, which will allow you to use them with other NewGRF sets. Most NewGRF building sets have a parameter which allow you to retain the original buildings in addition to using the new buildings. I would advise doing this rather than allowing for changes in NewGRFs in the middle of a game.

Doing this will allow you to enjoy OpenTTD 1.10 and all the previous improvements. You're missing out on a significant number of features that are quickly becoming the standard for gameplay.
Do you like drones, quadcopters & flying toys? Check out Drone Strike Force!

I appreciate the reply, and your answer does make sense. I never had such a problem with my games becoming unplayable, to my recollection.
Top

I've found out another option one can do if they become attached to their map but want to play with different newgrfs, one can simply toggle the console and enter 'restart' after selecting a new preset at the game intro menu.