Locomotion ladscape has steeper slopes than TTD and terrain allows to have vertical "walls", so you need new sprites for that.
Also, it allows to rotate the camera (in 90º steeps) or allows curved bridges or with switches or crossings (Not all bridge types allow them).

Tunnels needs 2 height steeps to be allowed, TTD needs 1, also, they are done only in vertical walls.

Look at the mountains on right: 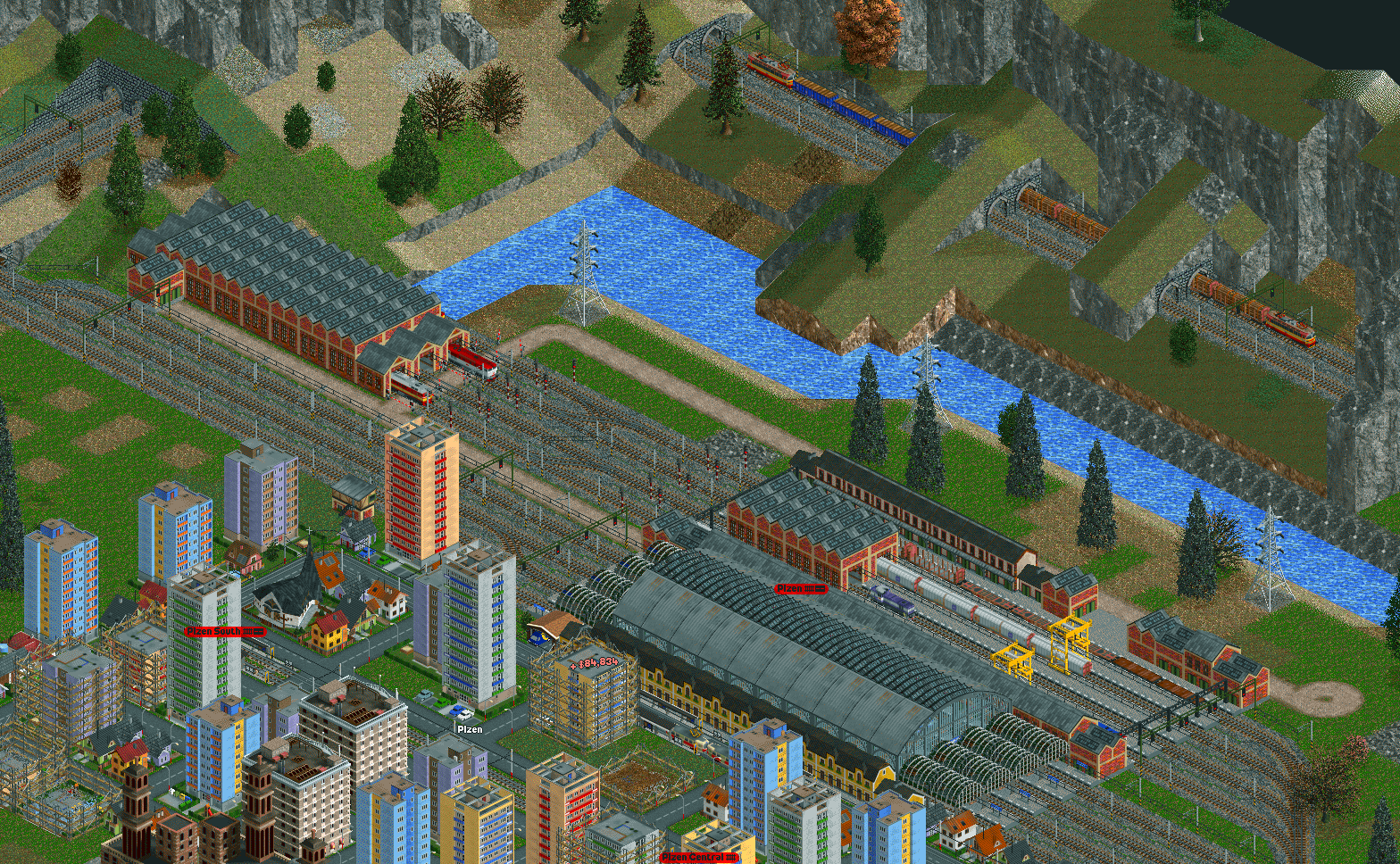 I think this has been discussed before, and I think I again did some mockups. Again I will look them up given some time.

Do you know how the turning is solved Locomotion? Do they have the same number of model views?

I don't know the internal code of Locomotion, I only know that there are 4 different curves (1×1, 2×2, 3×3 and 4×4) that could be overlapped in order to get railway switches. 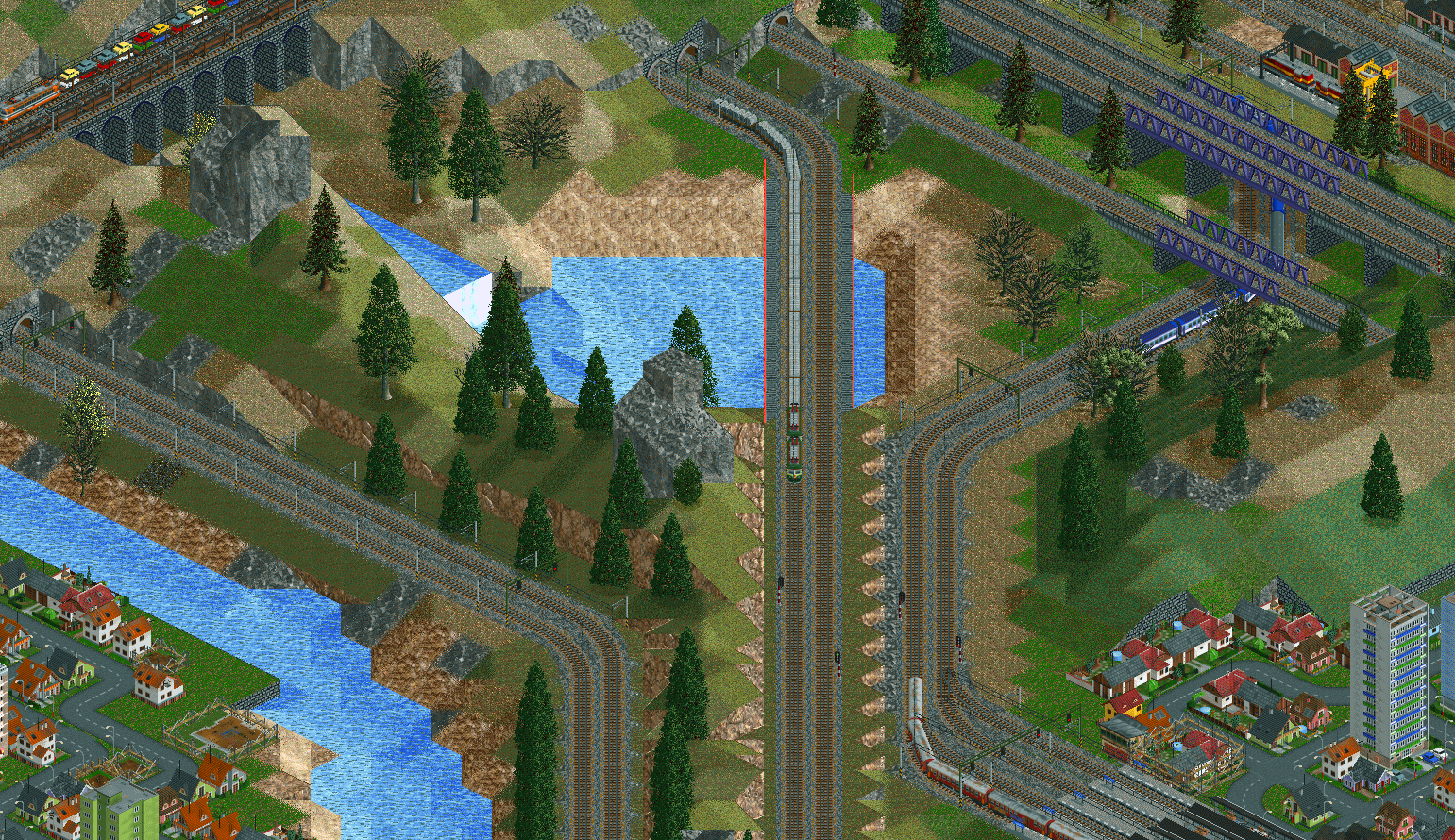 Do you mean the resolution or different proportions?

Booth.
In Locomotion some sets has a small reduction in length (Spanish trains, for example is 0.

, but trains could have a realistic length. In TTD trains cannot be longer than 1/2 tile. In Spain set for OpenTTD, there are three trains with the same real length (200 m: TGV Atlantique, Talgo 350 and Velaro) with different lengths in game.

Also, TTD trains have a 2:1 scale reduction, so a bus is bigger than a train coach.

OpenLoco has been a thing for a while now: https://github.com/OpenLoco/OpenLoco

Sadly, it doesn't get a lot of commits these days as most of the team is still primarily preoccupied with OpenRCT2 instead.
Top

More individuals coming out of the woodwork would be what it needs to get more off the ground, but most people who are interested just have a reason to avoid helping, be it a lack of coding experience or just a lack of time.
Nations Game Season 4 | Locomotion Screenshots | Twitch | YouTube | Noteflight

¿Do you know how we can help the project?
I mean, if there is something that can be done by someone who only have some experience coding in C at basic level.
Sorry if my english is too poor, I want learn it, but it isn't too easy.[/list][/size]
Top

It probably needs the same thing as OpenTTD - somebody willing to start taking a look at things and providing patches.
Do you like drones, quadcopters & flying toys? Check out Drone Strike Force!

I just downloaded the new update 20.03. It is getting better and better. I think we just need more people working on it. I love both games.
Top

I think increase max on number of bridges, signals, compatible with and track mods, station length. (LSP mod doesn't work on my english USA version). Fix the scroll in vehicles so more can be in objdat folder an be seen.
Top

Hi. Now there is a newer version, 20.07. I think there is still a lot of work to do but we are making progress with it (I am also working on this now and hopefully will have enough time to continue).
Top

We are mostly on discord but if you wish it's possible to make a separate forum also here on tt-forums. What do you think? Would be useful also to do it here?
Top

It might be helpful and bring more traction in both directions. I'd ask orudge about it, he's the forum administrator.
Nations Game Season 4 | Locomotion Screenshots | Twitch | YouTube | Noteflight

Seriously nobody thought about forbid trams in small villages in population below 1000 ?
It's funny to watch trams in village with 500-600 population... xD
Locomotion without OpenLoco is unplayable for me, so for me OpenLoco is must to have.
Find new graphics easier:
GRFCrawler -> http://grfcrawler.tt-forums.net
BaNaNaS -> https://bananas.openttd.org/
32 bit gfx in OTTD: https://wiki.openttd.org/en/Community/N ... 20graphics
32 bit gfx comparison: viewtopic.php?f=67&t=88503 Check "online content" button in the game menu % type "32bpp".
Top
Post Reply
33 posts