Finish sentence: "Locomotion will be ...

im affraid i have to agree with rak, the graphics are not soo good at the moment. the slopes are too steep, the bidges are not round but angular. the planes take off through buildings.

though we shall wait and see
(though i still believe in 3dtt)
John Mitchell
http://www.johnmit.net
Top

FOR CRYING OUT LOUD!!!!! We've seen ONE piece of rolling stock (A coach) and ONE locomotive. How can you say the trains look bad? Geez... Some people...
Regards,

SHADOW-XIII wrote:anyway trains are still not nice (and I hope CS will change that)

I'm pretty sure it will look better when they are in motion...
Top

Me wonders - why airports still have only one runaway?

Terrain is unrealistic (come on! single slope squares were ok 10 years ago, but I would expect some development here (hint 3DTT hint))

Elevated railroads? Phulleeezzz. They are like 0.000000001% of world's railroad system. Show us some busy junctions with tons of signals!

Build on slope is a cool feature, but the LCM brings it to the limits of nonsense

Anhoo - I agree that the graphics is *unimpressive*. Not bad, but could have been better.

BTW I hope CS will implement wideeeee curves like in TG (and 3d vehicles please...)

DanMacK - there are two locomotives - brown player on scr3 uses different loco then red/pink player.
All art and vehicle stats I authored for TT and derivatives are as of now PUBLIC DOMAIN! Use as you see fit
Just say NO to the TT fan-art sprite licensing madness. Public domain your art as well.
Top

Actually, take another look. It's the same loco (a Krok) =>Just half hidden by the station. I originally thought it was another loco as well. 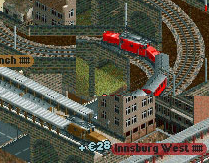 uzurpator wrote:Elevated railroads? Phulleeezzz. They are like 0.000000001% of world's railroad system. Show us some busy junctions with tons of signals!

A little remark on that: Here in Belgium, where we got a dense railroadnetwork, when the railroad is entering the city it is elevated, this is to reduce in the early days of charcoalsmoke from the steamtrains on the houses, and it also reduces the noise at the direct neighbourhood. so most cities got it, especially the bigger cities, like Gent, Antwerp, Brugge,Sint-Niklaas,... there aren't houses under it, most it like heaped up under it, like a stretched hill and sometimes just a viaduct, with a road under it or parking space, never saw housing under it.
but I admit that the elevation is a bit confusing.
Weeeeeeeeeeeeeeeeeeeeee!!!!!!!!!!!!!!!!!!!!!!!!!!!!!
Top

And even if it wasn't realistic, I'd like to see a Rollercoaster Transport network in action

I think LoMo will be great but it remains to be seen.

The feature I like the most though is that you can build bridges over houses!

That's real neat, I wish we could to that in TTD too. It would make it A LOT easier to build a nice and decent rail network in the Artcic climate (Atleast for me).

As for the graphics, I think that the fact that the picture has been compressed, the graphics are A LOT nicer in real life than on those screenshots, so I find it hard to make up an oppinion on that matter but I think it look promissing.

The most important matter (to me atleast) is gameplay.
I really don't like the way you build roads in RCT(2) and I hope that it woun't be the same in LoMo.

One thing puzzels me though. In one of the screenshots (Can't remeber which one) you can see a bus (Or a tram, not sure which) turning and it looks to me like there are only 4 angles on the bus, because of the angle.
So either there are only four angles like in TTD or CS took the screenshot at the excact moment when the bus (Or tram) was at that angle (Does this make any sense ?).

Yep I know what you mean, and I think it just when the screenshot was taken. Take a look at the trains and you get the feeling the turn like the trains in RCT/RCT2.
Top