Badger certainly didn't reserve on his words, but he is true. I'm not saying I'm the greatest in this game but cease the sharp curves please.
Also, having many lines come together at one station is something that is quite impossible in this game: I've tried many times and always failed. The only option that doesn't jam and looks ugly is simply joining the tracks in one direction, but if you start combining them it will be disastrous for the network eventually.
Top

Badger wrote:dedmicz - A lot of track and no trains. Building extra capacity when you've barely any trains on the current lines is a bit boring to look at. Show us more trains and you will also be on to the winning formula.


As I said in a few post earlier. It's year 1940 in game and I've chosen BR pack, which trains begin being available in 1957 or so. Lots of tracks are to serve heavier traffic in future, when I can use many more trains. Till then I just wanted to show some of stations and lines.
Top

When i have converging lines at a terminus station i sometimes keep them seperated from each other but give each line two or more platforms. The converging lines with access to all platforms works for a short while but as your network gets busier it will start to back log along both lines. Dont forget there is likely to be upto double the amount of trains trying to get to all platforms than there would be if it was seperated from each other.
Top

Well any screenshots would be appreciated, I appreciate what you're saying but without large terminus stations there is no realism. I have had large busy networks on previous games and you're right it can cause a lot of queing of trains but as long as the signalling is right all they do is turn around in their block section until the path is clear and in the stations they just keep turning until the path is clear which either isn't really a problem just got to be careful not to overload the network with trains!
Top

I checked out your pictures which were pretty neat but your stations seem to be part of a one way system as opposed to a terminal, I think i am going to take a look at my stations and see how i can improve them to have more of an efficient and eye catching approach lines
Top

Ah yes you're right indeed. The way I build that scenario was without real terminal stations, except for the commuter lines which have an ordinary two platforms station with double crossover in front of it. In prototype, at least where I live, it is possible for trains to transfer to other lines at terminal stations but platforms are always assigned to certain platforms. I guess that is also the case with many terminal stations in other places.
Top

Really good shots there Dedmicz, love the motorway and railway sharing the bridge good idea, some more screenies of this scenario would be good!
Top

hayeswood wrote:yes but when do you see that many freight engines on a uk freight train

Here are some bonus shots.

hayeswood wrote:yes but when do u see that many fraight engins on a uk fraight train

Not a good one though, a pair of Class 92s where the 2nd one hasn't got it's pantograph raised and is probably just being moved dead.

You really don't get many, if any, triple-headed freights in the UK, even double-heading isn't that common anymore.
|||| My OTTD/TTDP pics ||||Currently slighty obsessed with getting Platinum Trophies||||Retired moderator||||
Top

Obviously freight trains hauled by more than one engine are not common in UK. However in LoMo it's pretty hard to be realistic and effective at the same time. As I'm fan of long trains, I rather add another engine, than shorten the load. I tried to run long freight with single engine and it was causing jams, especially at slopes.

Here is screenie from latest game.

first diesel express and electric local.PNG
(423.45 KiB) Not downloaded yet

I have started the process of improving my station approach layouts as suggested and there has been a significant difference which you can see in one of the following screenies at Charton;

Improved Layout at Charton.jpg
(638.1 KiB) Not downloaded yet

Web of Industrial lines surrounding Shorehall.jpg
(632.83 KiB) Not downloaded yet 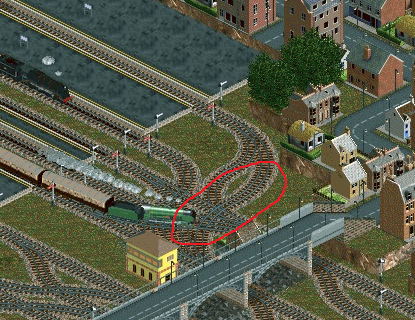 This is what I'm talking about, the line is a right angles!! It don't look good!
|||| My OTTD/TTDP pics ||||Currently slighty obsessed with getting Platinum Trophies||||Retired moderator||||
Top

I haven't improved that station yet I am waiting to remove the building next to the bridge for more space and don't have enough approval yet, i will get round to it at some point
Top