Also, I had an oddly productive year for automobile delivery. 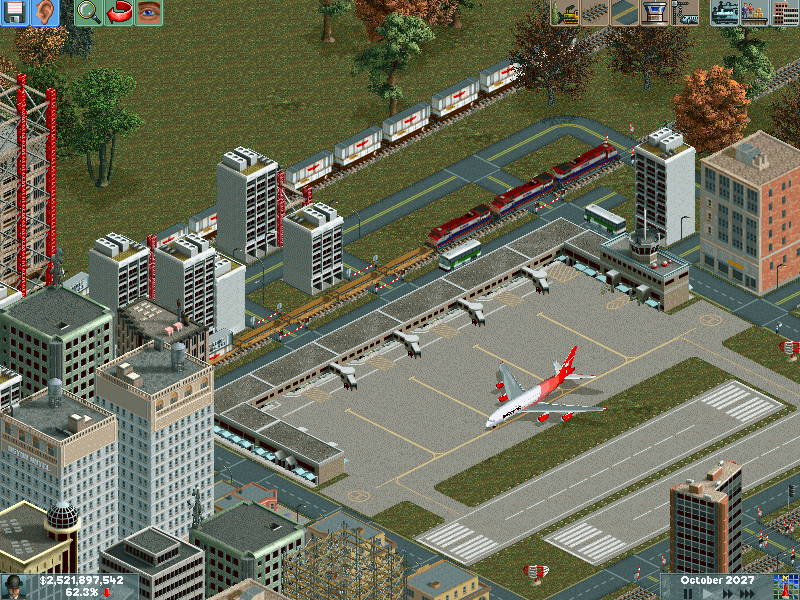 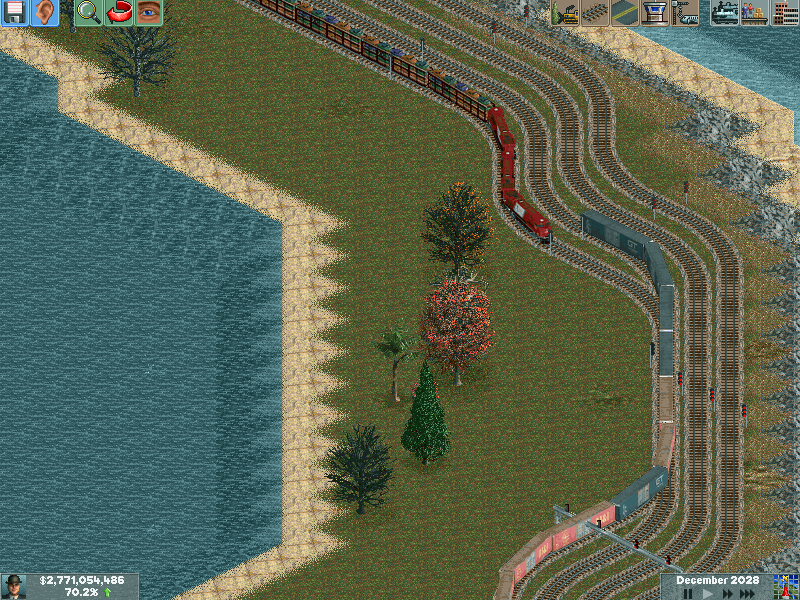 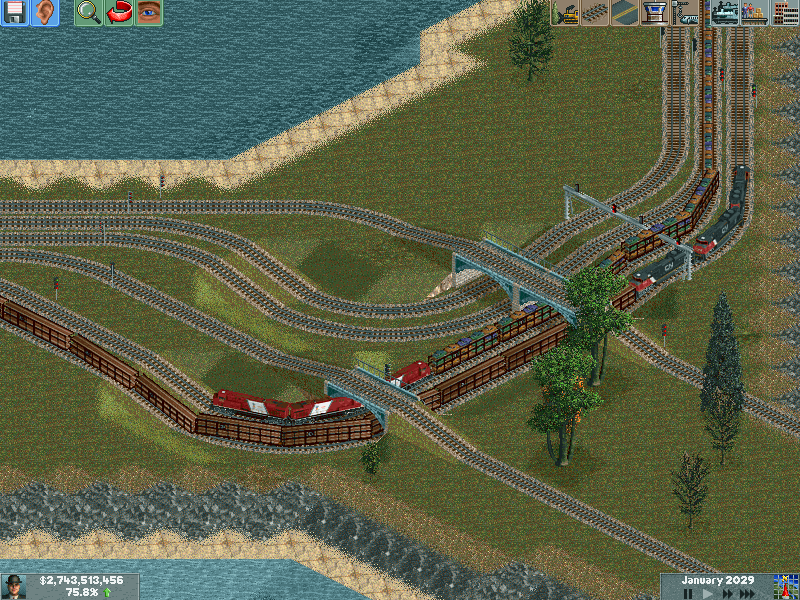 The long-awaited Oil Oasis reboot is on its way! I'll get to work on the game itself fairly soon.
Nations Game Season 4 | Locomotion Screenshots | Twitch | YouTube | Noteflight

So you decided to do it

Also nice screenshots a few posts back...are we still in a contest with that ?

Oh I don't know, I have another stockpile of screenshots sitting around though. I'm also having trouble deciding which engines to use.
Nations Game Season 4 | Locomotion Screenshots | Twitch | YouTube | Noteflight

Hahahahaha, I always have the same problem except now with the Soldier Summit

It's because of that 224 limit that I never know what to select and what not...

Maybe I'll go with Santa Fe. That includes a lot, but not everything. That is, after I'm bored with RCT.
Nations Game Season 4 | Locomotion Screenshots | Twitch | YouTube | Noteflight

Also a nice oldie...Wich RCT do you play, 1, 2, 3, 4 or the newest edition RCT World ? For myself I prefer RCT2 with all of it's expansionpacks. I made a few scenarios for the game, most people know my Titanic-scenario for RCT2. It's not that I play the game on a daily base anymore as it is the same as with Locomotion, but when I do I still enjoy every minute of gameplay that I can get

No RCTW for me, at least not until the horrid reviews cause them to drop their price. I'm holding on for Parkitect.

Which one specifically would be the original, because most of the scenarios have more character in my opinion and you can choose exactly what to charge money for as opposed to being limited to either rides or park admission.
Nations Game Season 4 | Locomotion Screenshots | Twitch | YouTube | Noteflight

Going thru all these screens is making me wanna see how many links are still working for these assets you are using. (mostly interested in the stations and bridge/slope-types, vehicles are a bonus)

(*nudge nudge* Looking for mod packs and sets list, searches can usually do the rest)
Top

I feeeeeeel like my replies are just a tad late, but I'll respond anyway. Been gone for a few years, moved, new romance, things like that.


mathwizi2005 wrote:(*nudge nudge* Looking for mod packs and sets list, searches can usually do the rest)

For stations I use a mix of Digidampfman's station packs 1-4 and some of the freight stuff that comes with the Provo pack. Vehicles are from the North American Megapack. Some assets in the Megapack might also be found in the Provo pack, such as the gantry signals. I have no idea for sure though, so download both if you want. As far as bridges, some are from the Provo pack (grass slope, flyover) and others from various places on the forums. Some I honestly have no idea where I got.

AmiTrains (redirects from Amitrains.co.uk) Look at the list on the left.
All earth slopes concept 1 and 2

If you're not familiar with modding the game then you'll need to take a crash course on Locotool as which bridges and signals the track can use are determined by the trackst.dat file in Objdata. There's also a hard limit to how many of each asset you can use (7 stations, 7 bridges, 16 signals) so you'll have to choose wisely. Each pack which modifies trackst.dat allows only its own add-ons to work, but they can't be merged nicely. 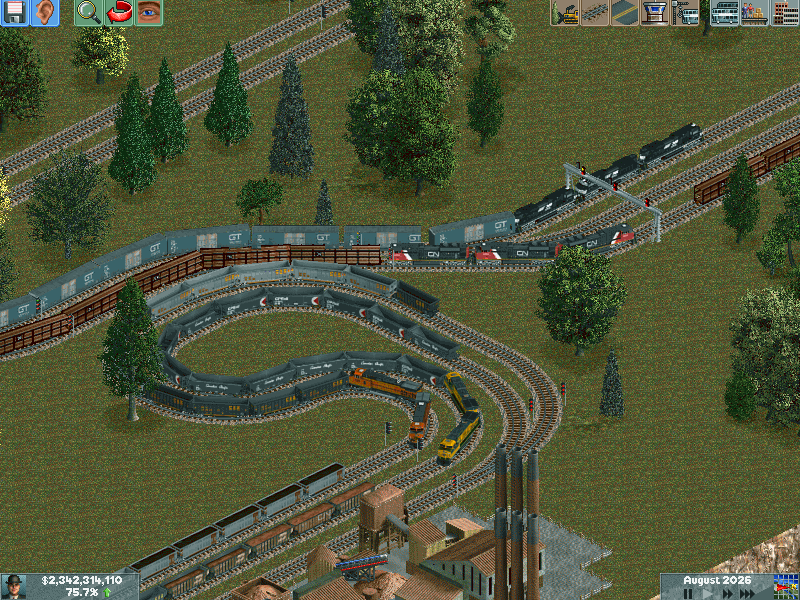 Screenshot15.png
Final shot of Blackwater.
(646.91 KiB) Not downloaded yet

Apparently I also took some shots of when I played the Lake District the default way. 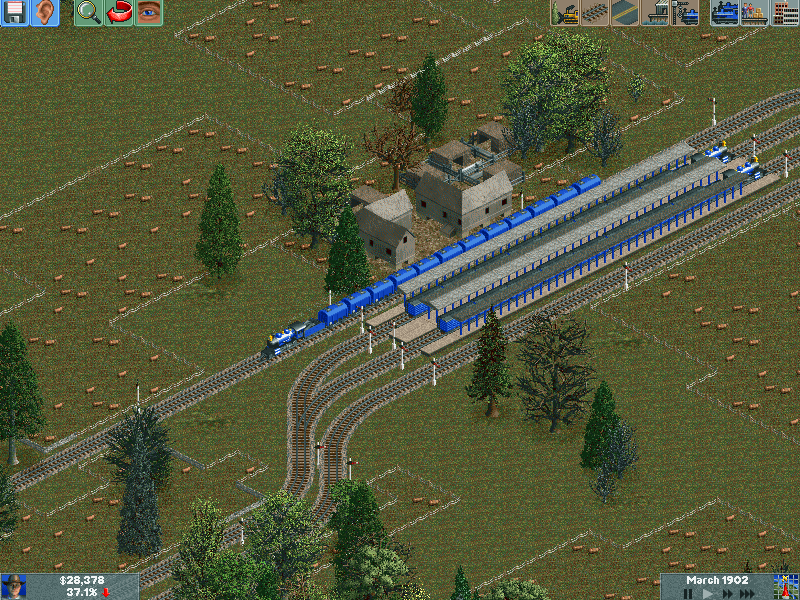 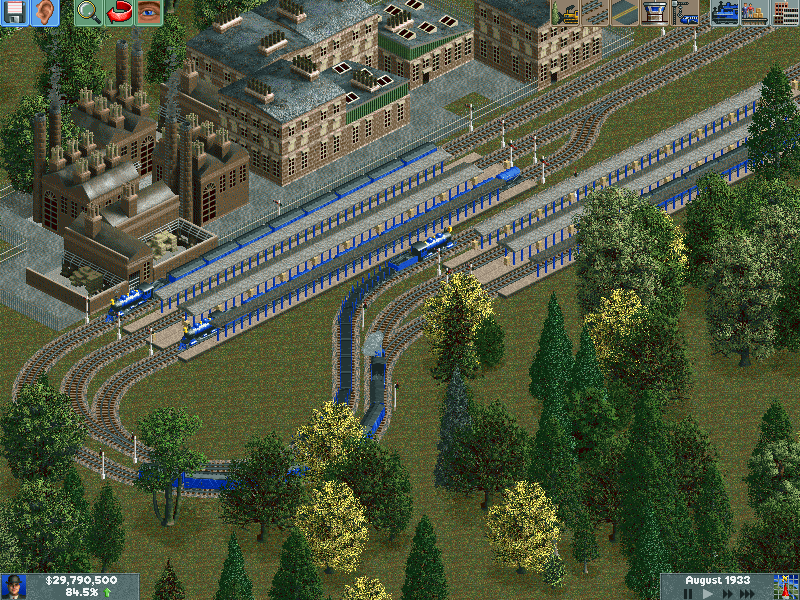 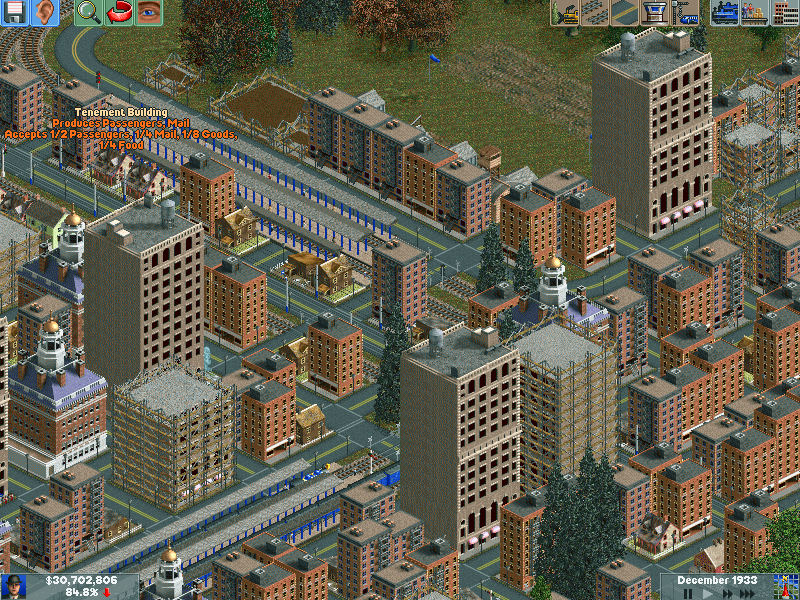 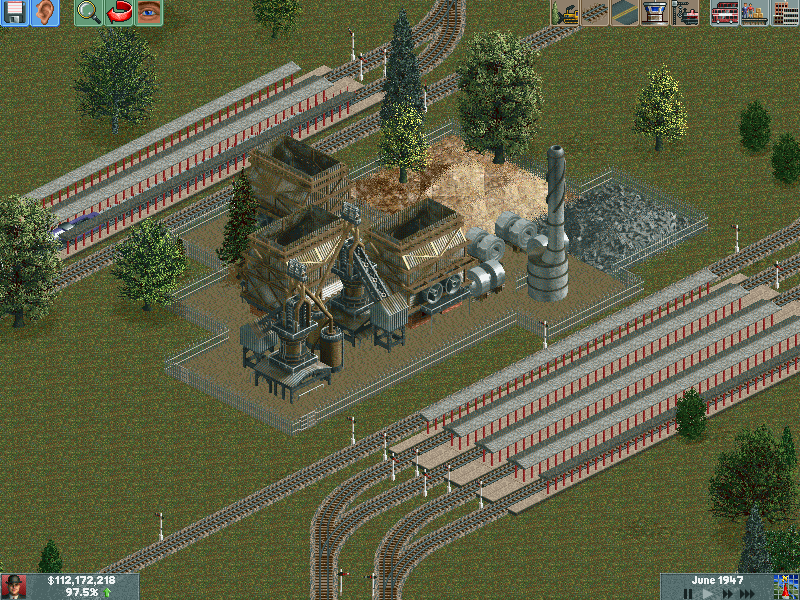 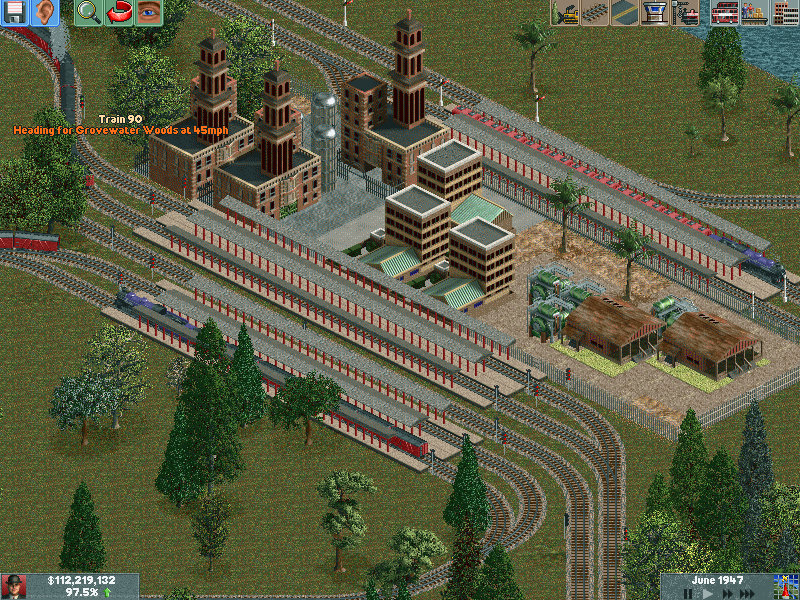 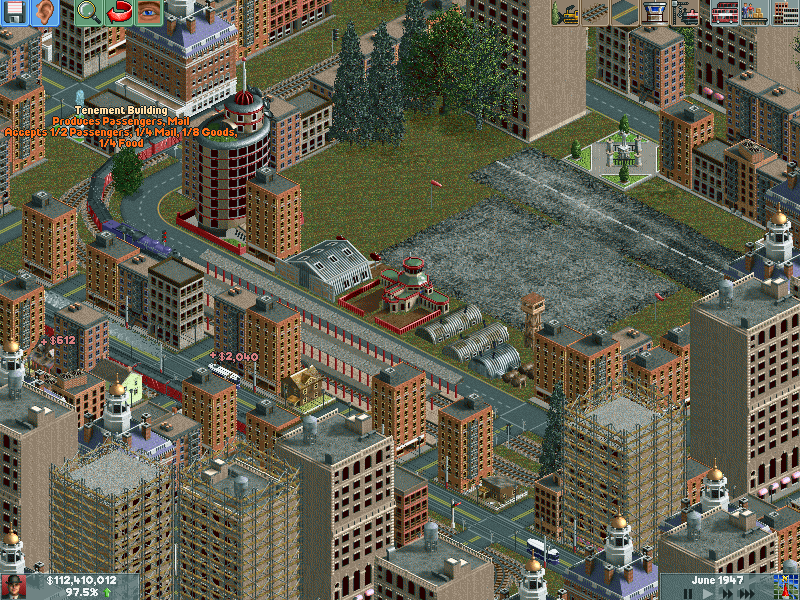 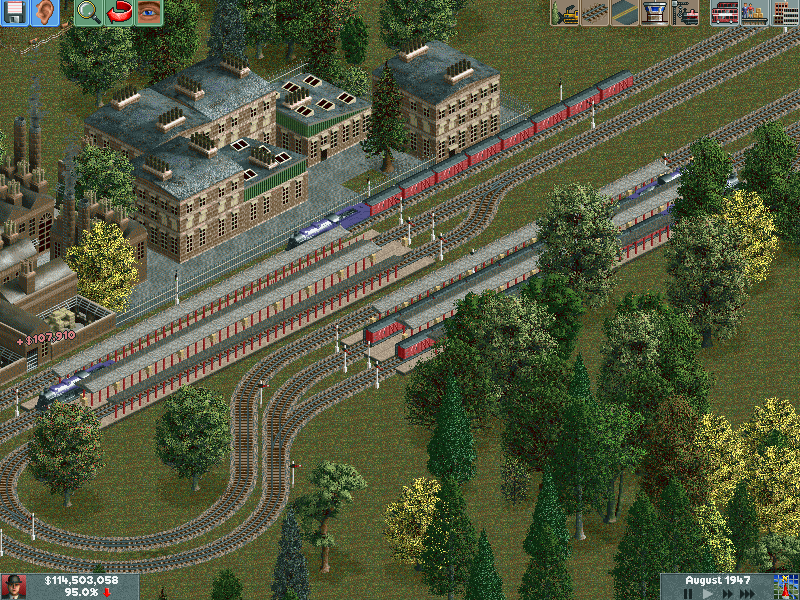 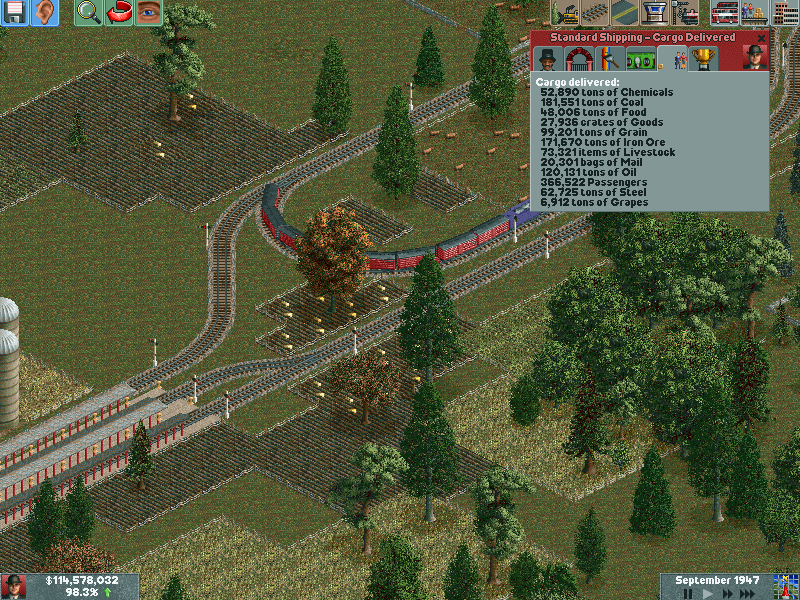 Finally, here's a few from a more recent adventure. I'm trying to finally beat all of the default scenarios and I got sidetracked on North America (East) 1950. I have assumed direct control over Baton Rouge and I tried to keep competing companies out of the area, going so far as to reload the game if one of them built an airport or rail line and blocking any road or tram lines. The AI makes everything ugly. I swear I would do this less if they knew how to build in a straight line.

Also might switch my resolution back to 800x600 if people want to be able to see screenshots right away. I prefer playing in high-resolution, but if anyone is bothered I'll switch at least for screenshots.

Do you find it a bit messy to make routes on some of the Loco-created maps? Like North America... some really RANDOM terrain and whatnot.
Top

I go for the flatter areas on the hilly maps or build road services mostly. When I get more money and I can afford underground or high-rise tracks I'll go anywhere though.
Nations Game Season 4 | Locomotion Screenshots | Twitch | YouTube | Noteflight

I will say, this thread is pretty neat to get inspiration on how to build nicer layouts, for sure. Experimenting with 20-block trains with the normal station size... Trying to sort-of mimic what you've got on some maps. Thanks for all your work!
Top

Thanks, I plan to continue posting now that I'm back on PC for a while. I might also stream, in which case I'll link the stream on the first post.
Nations Game Season 4 | Locomotion Screenshots | Twitch | YouTube | Noteflight