Hints and Tips on playing Locomotion (No off-topic posting)

Leave your Station building Untill all your tracks and signals are layed, This way, the ratings of what ever the station will handle wont drop before you have a train running on it and you will start with a high rating so you start making money asap.

Put your slopes underground for maximumspeed if the train can drive faster then the normal slopelimit of 60mph-1 that is.

JonnyRocks wrote:If you open the waypoints of one vehicle, and build a new one, you can copy the original waypoints of the first train, by clicking "End route list" instead of on a rail or station, and it automatically copies the route. (Sorry if thats not very clear)

If you double click on a waypoint int he waypoiunt menu, you will go to it

Sorry if people already knew these, I only just discovered them!

Hobgoblin wrote:
thats a good tip i discoverd yhat myself the other day it saves A LOT of time

nice tip but beware. if one plant is producing at a much faster rate, itmight cause a back up of trains at one mine wile the other is trainless. i had that hppen a few times.

That will only happen if you have Wait for full Load, right?
Anyway, nice tip

ChrillDeVille wrote:That will only happen if you have Wait for full Load, right?
Anyway, nice tip

Personally i do use full load but if 1 industry is producing slower than the other i leave off the wait for full load from some (but not all) of my trains For the smaller industry. I usually find after a while that the quieter station catches up in production as it will have less empty time between trains and as i use double stations the quieter industry will tend to have 100% constantly so will begin to increase production earlier than the busier station


talking of lumber i recently played a game where 2 forrests were side by side i couldn't resist but because i was concentrating on trucks in the and it was (1920) i had only 1 train available a tiny 450hp steamer so i built my station 27 long 4 blocks above ground had 34 wagons behind a tiny train and put a ramp down off the end of the station 1 way signals all the way and dropped the other 3 blocks down along the way ended up with about 16 trains with 4 platforms (2 stations).
The empty trailers were a little slow coming back but i was making a fortune just kept adding trains as the forrests upped production. (SIDE NOTE at four blocks high you don't destroy the trees). I used the same trick with goods to a local town
which reminds as i didn't want to take the goods too far i did just as i say below took (see tip) 2 game years before i could take goods there by that time i had finished building the connection and had started to expand my lumber operations and had enough money to buy the tons of goods trains i needed to keep up

here is another tip

If you have no where to take goods, or simple want to use a town you cant use yet. It will cost a little effort but not a lot. Build your station very close to the town you want to use and build some roads around your station connect your roads to the town roads and be sure to build roads both sides of your station now build a tram or bus route but build as though your new roads have loads of houses on them as well as in the already populated area this will cause the town to grow quickly round your station and tram route (so make sure you build all your access tracks before the staion is over run

(also as the town grows your Tram/bus will start to make a good profit too)
english trucker intrests transport games and driving cars...............i must be mad

also another good tip is to take a break every 45 minutes to an hour from you computer (you may leave the game running if you are not afraid the AI will use every last bit of empty space with their ugly designs) and also check the refresh rate of the monitor is at least 75Hz (after 2h locomotion I had a terrific headache and i saw that the refresh was 60Hz! bloody direct X...)
Top

Costas wrote:also another good tip is to take a break every 45 minutes to an hour from you computer ()

That is a great tip because I get bored sometimes and If I go away for about 10 minutes, I want to play again.

This isn't really of much use, but I'll share it anyway.

If the game names a station with a suffix (e.g. Layfield Central, Layfield Woods) and you want the station named after the town itself, just rename it to the town name and add a space afterwards. The game counts it as a different name and there's not much of a visible difference.
Scenarios that I have made: ECML - Brighton-Cardiff
Top

Transport Typhoon wrote:Put your slopes underground for maximumspeed if the train can drive faster then the normal slopelimit of 60mph-1 that is.

Or use the land slope that was made. They don't have a speed limit.

Never drive trains manually on a main line. Trust me, You can't see the signals if your going fast so you could run a red and... BOOM!!!

Another tip is for rapid service, Don't use buses. Use Trams.

So you can have a articulated route and a normal route. I usually use the ALRVs on routes that don't go up hills. They also have great capacity plus if you let them go fast without stopping they will go fast. Trust me on the speed. In Toronto I was on one going about 100 kph (60 mph). It was beside a highway and since cars here in Canada go 120 kph they were passing us but it was still fast.

So in otherwords the CLRV is good if you want to have a system that is like buses except on rails.

I like Articulated Buses or Streetcars (Although I really like anything with wheels including planes, Thanks to Seelenquell for making Toronto's ALRV and CLRV for Locomotion. All we need now is a TTC D40LF and D60LF to go with the LRVs. Plus the Scarborough RT vehicles too.)
Resion for the LRV's is to make a good alternative to buses. Visit Here for more info.

Man; It's been age's from when I last played. And I still do play it, but not having the net any-more makes it a real snooze; mainly because I see no point in making realy fancey set-up's if no-one is able to see them.

I have to think another great tip is to keep going to this site.
Top

BlenderUser wrote:Man; It's been age's from when I last played. And I still do play it, but not having the net any-more makes it a real snooze; mainly because I see no point in making realy fancey set-up's if no-one is able to see them.

I have to think another great tip is to keep going to this site.

Still you got a great tip, keep going to this site.

Isn't it a good tip?

I like Articulated Buses or Streetcars (Although I really like anything with wheels including planes, Thanks to Seelenquell for making Toronto's ALRV and CLRV for Locomotion. All we need now is a TTC D40LF and D60LF to go with the LRVs. Plus the Scarborough RT vehicles too.)
Resion for the LRV's is to make a good alternative to buses. Visit Here for more info.

here's one i'm slowly starting to do do more often

I have found during game play that when you have an extensive rail network with many junctions leading off to other lines that terminate at a station can be a problem as the trains AI i think is set on a course so that it tries to go in the direction of its destination however the direction of the destination can say lead this train to the wrong place for example a small branch line that leads to a coal mine so by which time this train is confused wondering why its a dead end and the coal train is trying to get into the station blocking the other trains way. the only thing I can suggest is too select the route by clicking the track which you want it to run on and have a order of (route through way points) that you want it to run through in order to get to its destination i tend to think of them as ghost stations as they act as destinations in order for it to reach the one you want it to eventually get it to without relying on locomotions poor AI
If anyone has any other ideas to overcome the problem feel free to comment back
TOM!
Top

Who digs this, may tell.

If you have A LOT of cash and want to make a rail station for passenger why not make it in the heart of the city and you wont have to demolish a single building just simply build the station above the city, you will hav to build a slope up of course to the right height above the buildings but once your up to the level you can build wotever you like up there. 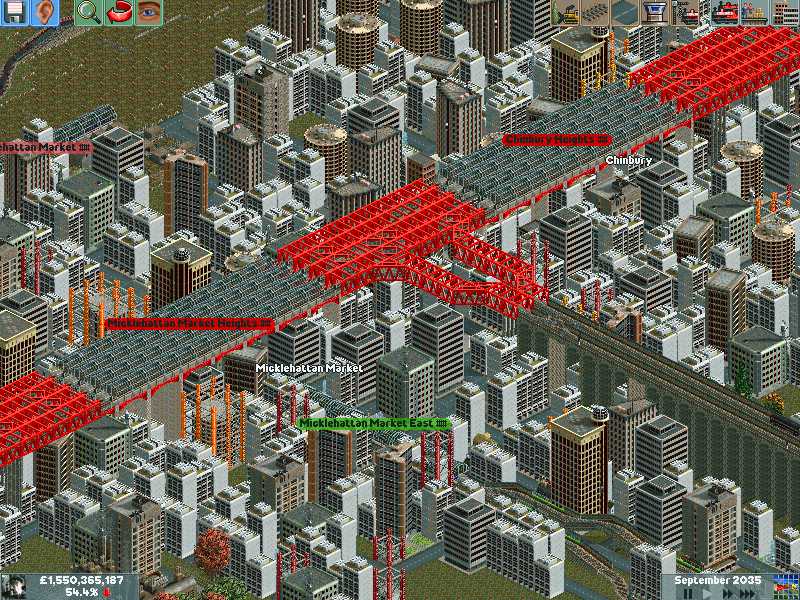 That's a cool station, but why not just build it underground?
Nick - Creator of the virtual railroading review series:

Building such a thing uderground is a hell of a job, I only build underground when I have no other way
Well, back to work, lot's of it in the near future
Top

Here's what I think may be a very helpful tip:

Have you ever had a not-so-busy line with a few trains and a fair amount stations in between the terminals and the trains are fairly spaced out but somehow a few months down the line the trains manage to be trailing behind the other with the first picking up all the passengers and making all the profit while the trailing trains are wasting you money and picking up 0 passengers?

Well, thanks to Bahn 3.83 and a little thinking, I came up with a very simple solution. Reduce the amount of signals placed down to the point where the trains are spaced out to the way you want it and not where the trains are always given the go from the signals and have the oppurtunity to catch up to the train ahead.

Signals are very frequent and trains are almost always given a green signal and often catch up to the train ahead.

Signals are more spaced out and trains aren't given the go at a signal until the train in front is cleared out of that specific section causing the train to be held at a signal not allowing it to catch up to the next train.