It was indeed greyscale. Also, you can download it from http://download.transporttycoon.net/ - better to have the original disks, of course, but if you can't find them, there's that option.
Owen Rudge
owenrudge.net | Owen's Transport Tycoon Station | Owen's Locomotion Depot | The Transport Tycoon Wiki
Top

Not really good pictures but I got two versions. The powerplus one is from 1994/1995 (TTO) costed me 100 guilders. (About 45,37 Euros's)
I got TTD for my birthday. (Don't remember wich birthday) I also don't know what it cost but it seems like it's not the original TTD CD but more like a "Mircroprose Best Buy" CD or something. (I didn't get a manual or what so ever with my TTD game. But I did got one with my TTO. (I already knew how it worked because I played a 30 minutes demo)

That demo is different from the one posted here in the beginning of this thread. (I played with that one too, but it crashed too much) the other demo I got had the exact look and feel of the TTO version I took this picture of. And it lasted about 30 minutes, but you could save your game so I played once beyond 2000 to see if there was a real monorail in it. (And it was

Too bad I don't have the original jewelcase of TTO anymore.

Sorry to say this, but what's with the picture quality? Were they taken by a mobile phone camera?

I wish I could buy TTO/TTD or both... They're just too rare to find. It looks like you're a lucky one since you own both

Sorry to bump a 4 year old thread but someone might find this interesting.
I have an additional version that I don't think has been mentioned in this topic yet..
Its version 1.0.6.021, May 1995
It was distributed in Australia (maybe other countries too) on a CD containing Theme Park and Transport Tycoon.

This version does NOT have the martian landscape/scenario editor.
It fixes the money rollover problem where you can build a massive tunnel and have the cost added to your account instead off subtracted. From my limited testing it seems that versions 1.0.6.011 and earlier would roll over at around 2 billion, in this version I've had more than 10 billion in my account.

I also noticed that when you get a red error popup from illegal construction or holding shift to get a quote, you can clear the popup by right-clicking. In earlier versions you had to click the X to close the window.

EDIT: After further testing I've found that version 1.06.016 (english, Feb 1995) has these two fixes as well- nonetheless this version is here for comparative purposes as well.
I've had a poke around with a hex editor and this may just be a localised version for non-British English markets. In the TYCOON.EXE file some strings have changed- Tonne has changed to Ton, Quit has been replace with Abandon in some places. 'Trident' has been added to the list of video cards to display on the About Transport Tycoon dialog. There may be more but that's all I've found so far.

I didn't get my hands on the Deluxe version, or the version with the scenario editor/martian landscape until years later. I had a 486SX25 with 8MB RAM and it absolutely chugged, a game year would take more than 2 hours towards the end of the game when I had maxed out the number of allowed vehicles, but I loved the game so I just kept playing anyway.

I have provided a link here for comparison purposes, contains installers for English, French and German versions.
http://dl.dropbox.com/u/9151127/TT106021.zip 7MB
Top

Interesting. I shall take a look and see if it's an EXE I know about. (TTDAlter supports every known version of TTD, but there may be others I don't know about...)
Owen Rudge
owenrudge.net | Owen's Transport Tycoon Station | Owen's Locomotion Depot | The Transport Tycoon Wiki
Top

Interesting indeed. Even more as I have been unknowingly offering 1.06.016 on my own website (you might want to check my signature

DonutKing, could you provide a cover image or title of the CD-ROM you ripped that from? I don't think that bundle you're describing has been widely known around here.

LOL sorry I didn't realise that was your site

Unfortunately the box and the original CD are long gone, they were originally bought by a friend of mine in Australia sometime around 1996-1997.

However it is part of this series http://www.mobygames.com/game/dos/essen ... Id,158726/
Although that is the Essential Selection: Flight pack, the pack this came from had a blue cover rather than the purple of the Flight pack, and was called Essential Selection: Business. It included only two games, TT and Theme park. And obviously the version I bought had English on the cover rather than German

The installation utility is a DOS program, here is a screenshot of it: Owen: Does TTDAlter work with TT original? Just had a quick look and I couldn't get it to work.
Top 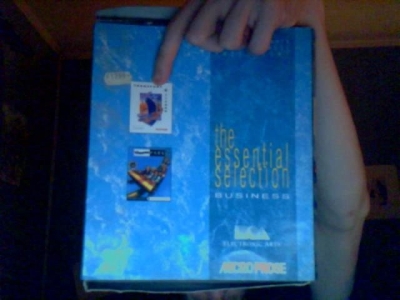 DonutKing wrote:Owen: Does TTDAlter work with TT original? Just had a quick look and I couldn't get it to work.

Ah, no, I realise that now I came back to re-read this thread that it was about TTO and not TTD. Sorry!
Owen Rudge
owenrudge.net | Owen's Transport Tycoon Station | Owen's Locomotion Depot | The Transport Tycoon Wiki
Top

Lord wrote:Aah, it's this one, I see:


Amazing, that's it exactly! Did you find that somewhere or did you already own it?

DonutKing wrote:Owen: Does TTDAlter work with TT original? Just had a quick look and I couldn't get it to work.

Ah, no, I realise that now I came back to re-read this thread that it was about TTO and not TTD. Sorry!

No worries, thanks anyway

I had seen the box already, but never knew that it contained that unique version. I only own the "original" unbundled versions listed on http://www.tt-ms.de/about, plus the "Tycoon Collection" bundle, because it's the "original" release of the Windows version.

There must be yet another version floating around btw, with unknown version numbering. Various games magazines reviewed TT back in 1994/95, at least two of them showing screenshots that are clearly taken from a version prior to the earliest known release version, which is 1.06.011. I attached one of those screenshots for fun below, taken from the finnish MikroBitti magazine. It's a shame that no one has been able to find that version yet. It MUST be in some editor's archive. 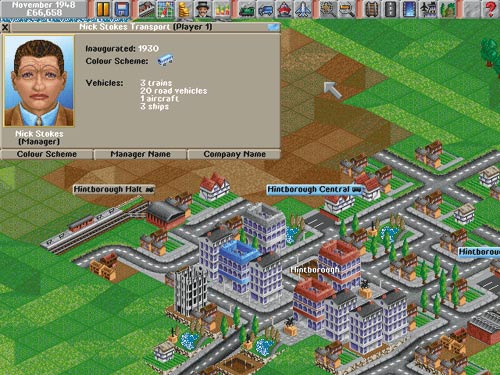 So, some years have passed, people have become more experienced...
I propose that we attempt to crack this early demo once more to remove the crash occurring at 1932, and to enable road vehicles, airports, and ships for the player so that we can properly experience this early 'beta' of TTO and Transport Tycoon in general.
Top

This project exists and is called OpenTTD.
Correct me If I am wrong - PM me if my English is bad
AIAI - AI for OpenTTD
Top

No it doesn't and thus it is not called OpenTTD. If it existed it would be called OpenTTO or TTOPatch.
Formerly known as r0b0t_b0y2003, robotboy, roboboy and beclawat. The best place to get the most recent nightly builds of TTDPatch is: http://roboboy.users.tt-forums.net/TTDPatch/nightlies/
Top

I cant see how OpenTTD is related with removing the demo limits from the 1.03 build.
We need someone who can hack it and remove the whatever blocks them so we can fully explore the only "beta" of TT

The game crashed automatically at 2nd januar 1932.
Something must be causing that, and we need to unite and "fix" it.
Perhaps the date on a savegame can be boosted to 3rd january 1932?

In that case, I have a savegame here:

I'm not much for bumping but I need to attract people's attention.

Is anyone with experiences in HEX willing to attempt this?
Top

Gurluas2000 wrote:I'm not much for bumping but I need to attract people's attention.

Is anyone with experiences in HEX willing to attempt this?

And the fact that noone replied on your earlier post doesn't give you enough clues?