How often do you service vehicles

How often do you service vehicles

And does that help with breakdowns?

I'm trying to 'play' Open TTD by building a timetabled network on a UK map, but a reliable timetable is hard to do with lots of breakdowns. As I trial on one of my lines I am building a Service into the schedule, but I've read that means the train won't get serviced anywhere else. I can allow for breakdown by scheduling increased times but the Breakdowns seem to happen a lot to some trains and not at all to others
Top

A lot of players turn off breakdowns, especially in a case like this. I never use them, because they don't add any enjoyment or realism to the game for me.
Improved Town Layouts | Improved Town Industries
Top

I'm with the "Turned off breakdowns" crowd too - they happen unrealistically often, and are very lacking in nuance (eg if one car of an MU breaks, the train stops rather than continuing at reduced speed as may be possible). But more importantly they're just frustrating to deal with..

Regular servicing availability (lots of depots) and replacing vehicles when they get old will both help a lot with reducing breakdowns though - the two main factors (as far as I'm aware) for breakdowns are vehicle age and time since last service.
Jon
Top

I'm using the Reduced Breakdowns setting, because I think that the game becomes boring without some element of randomness. I'm always setting up mandatory Depot services roughly at the regular service intervals, or at least 1.5 times the regular intervals, which will keep my vehicles reasonably healthy. Short routes will always have one mandatory Depot service at each round trip, usually immediately before loading. 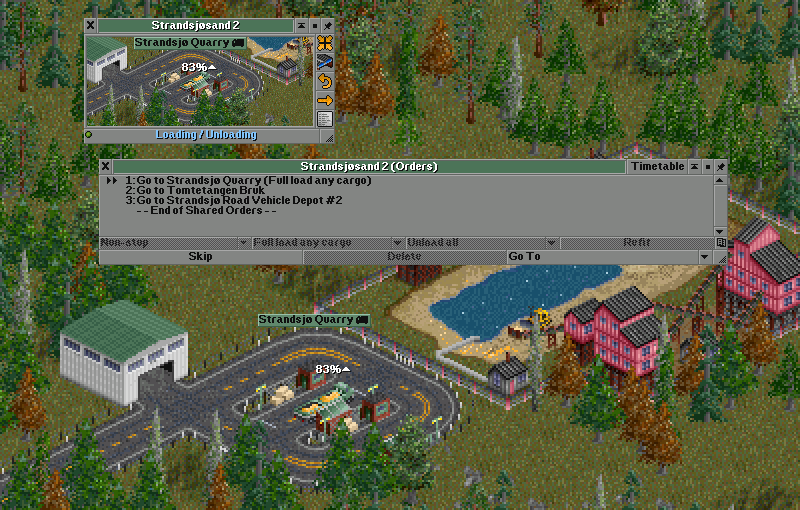 I believe it's not possible to keep accurate timetables with breakdowns. At best it would require very generous time margins and passing loops at regular intervals for trains that go in the same direction.

If you're playing with breakdowns, you should set up your routes using mostly the full load order. It is quite practical even for passenger routes, but you should make sure that the full load order corresponds to the largest town on the route. In this case, your trains will serve the largest passenger source to their fullest capacity, and all the other sources will be serviced more or less regularly.

Of course, it is crucial to provide frequent servicing opportunities for your vehicles, especially for long-distance trains. It is a bad idea to use planes when the destinations are more than 400-500 tiles away: the longer the plane is in the air, the higher the chance it will break down. Once it's broken down, it will not land on any intermediate airports for servicing — instead, it will fly all the way to its destination at a greatly reduced speed.
Top

Of course it is possible to make a fixed timetable with breakdowns turned on. As long as it's not a "Normal" breakdowns setting - I can't imagine playing with this setting, it's terrible. More than once I have had a situation that the vehicle broke down even just after leaving the workshop!

This screenshot is from 2015, when the last time (by accident) I played with this setting. Version of the game 1.5.X, but it probably works the same now.

Reduced breakdowns are ok. Maybe they are not realistic, especially the fact that the vehicle travels with passengers for inspection during the course between stations. Probably everyone who traveled by rail has such experiences, right?

As a curiosity: On the Polish-Belarusian border (general on the old soviet union border), trains enter workshops, passengers stay in the carriages, and during this time the chassis of the entire train is replaced... This is not a joke. This is happening! The reason is that the track gauge has changed. Currently, a special mechanism is being introduced or has been introduced, but previously it was similar to OTTD.

Anyway reduced brakedowns can be an interesting challenge, especially with more complex networks.

General, the basic rule I follow is the service at least every 100-120 days. The distance between the workshops is not important, but the travel time. During this time, the risk of brakedown is minimal and thanks to this I practically never have any failures - it is an unknown problem for me. The second, equally important rule is the lack of train / vehicle driver will - the service is to take place where I want, and not where blind fate will decide. Services are either specified in the timetable or are imposed by the way the routes are built. Another important thing is to exclude the possibility of going for a periodic inspection by self - it is enough to extend this time to the maximum in the company settings (the condition is your own, scheduled workshops at appropriate intervals). 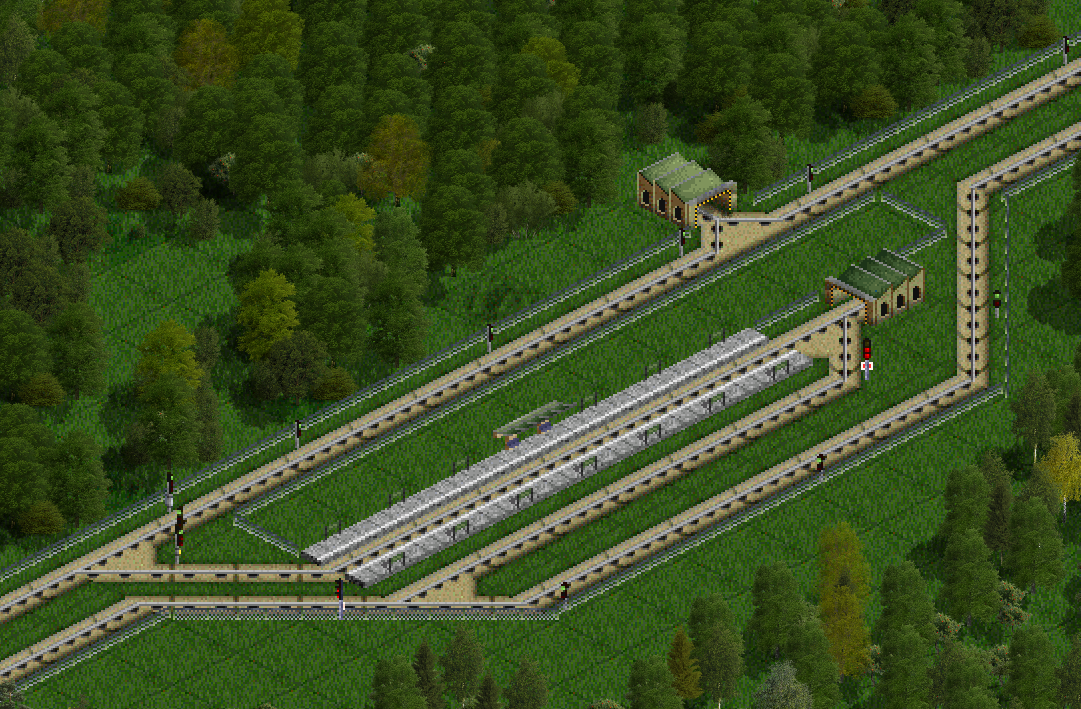 It is possible to create a workshop layout that can handle any traffic volume. Sometimes you have to use a waypoint, sometimes pre-signaling devices are enough. Creating an efficient machine can sometimes be an interesting challenge. 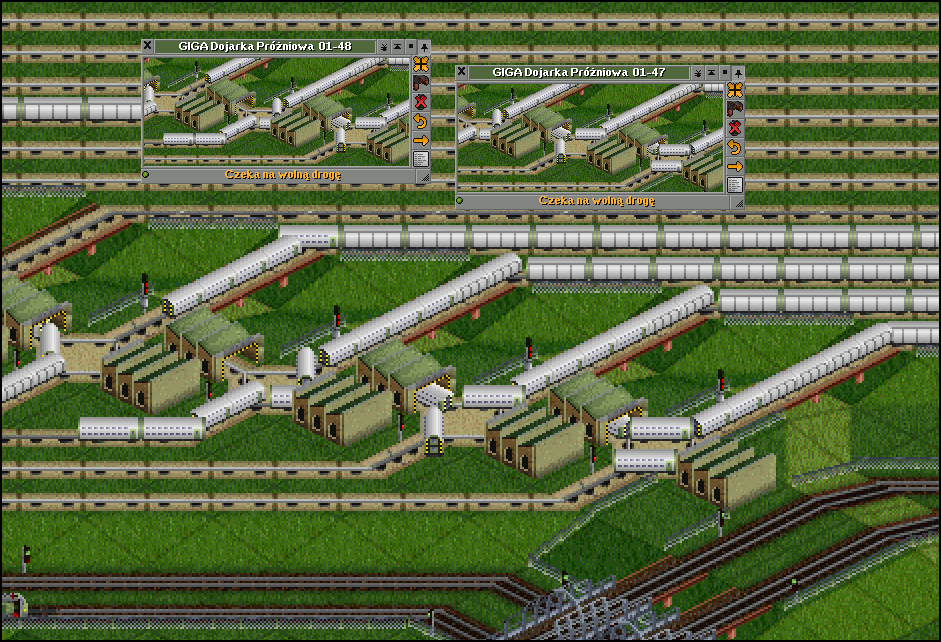 When it comes to the timetable, despite the fact that breakdowns are extremely rare for me, I always give some extra time for unexpected situations. However, I don't extend the time of each trip or stop, only those at the ends of the route, even by 10-15 days. Sometimes I also use a different method and leave one or two sections at both ends of the route without a set time, but this requires the creation of special buffers (for example, a station with a single platform where the train doesn't load or unload, but only waits for a certain amount of time.) that ensure the appropriate spacing between vehicles.
Good luck!

Forced servicing.PNG
(861.35 KiB) Not downloaded yet