What's your preference when building track for a high-volume, multiple train, long train (6 tiles+ is long to me, I'm sure someone else will think I'm silly) run of track between two industries? When I just started playing recently I was building one-way track with block signals and path signals to control traffic flow into the station platforms, but I was goofing around on the Wiki and saw the screenshots of bi-directional track with path signals and started messing around with that. Is there a particular advantage to using one style or the other? I like how the bi-directional track allows for re-routing around broken down trains, but I'm having a hard time telling if it's better or worse for traffic in the line.
Top

I always go for single directional track, since it is easy and consistent. I can see the advantage of bi-directional running, especially with 3 tracks (the middle for overtakes). I should perhaps try it out...
Top

I think this would be a good use for entry/exit pre-signals. That would be one way of avoiding gridlock.
Top

Gwyd wrote:I think this would be a good use for entry/exit pre-signals. That would be one way of avoiding gridlock.

They were created before path signals existed. The latter are superior, since they allow several trains in the same block.
Being a retired OpenTTD developer does not mean I know what I am doing.
Top

Yeah, I actually went ahead and did 2 tracks in each direction to allow bypassing broken down trains. That works well, and should scale nicely. Takes up a lot of space though.

I've noticed on seriously taxed cargo routes the bidirectional tracks are a mistake since the cargo output is so high, trains are running nearly back to back to back. I think there might be some use for this in very long distance passenger routes that are point to point or circuitous, since it seems they're usually less dense and more spaced out than a lot of high-volume cargo routes.
Top

Well, as i'm a fond user of road vehicles, most of the freight goes by trucks, or cargo trams for recyclables sometimes (when using FIRS).
However, all my train lines are nearly mixt - only the stations are separate. Because of this, all my lines are bi-directional, and I always make space for making 4-track stations for faster trains to pass slower ones.


I make 4-track lines only for suburban train lines (or S-Bahns if you prefer), as there are many, many trains needing high capacity going through those lines, so they need to be separated from regional / intercity / highspeed services. I never activate breakdowns, despite it being realistic most times i'm using high-speed services, there are at least 3 breakdowns on two orders.
NewGRFs by Tony Pixel :
North American Passenger Railroads
Not Enough Subways

Gwyd wrote:I think this would be a good use for entry/exit pre-signals. That would be one way of avoiding gridlock.

these things never work properly for bidirectional tracks, as they cannot distinguish between directions.
You might not exactly be interested in Ferion, but if you are, have fun

A Bi-directional track, I would only use that when demand is low and money scarce, actually, only using it as a single track. When making a tight schedule for this, this works out very well, but there must be enough resilience in the schedule. I however made such stretches in a very complex map of the Netherlands (4096x4096) as the end of a line that is interconnected with loads of other lines (it's Utrecht Centraal-Tiel, a selfmade map btw). As, just like the real world, trains are planned tightly there is a delay every now and then.
Top

I also make single-track lines, but these are usually street-running (roadside) lines connecting stations, or secondary lines, as i want to make them keep their rural charm

i tend to build semi-bi lines, like in this picture for example, hte trains are mainly right hand drive, but if the station is being serviced by a train, any other traffic will switch and pass... 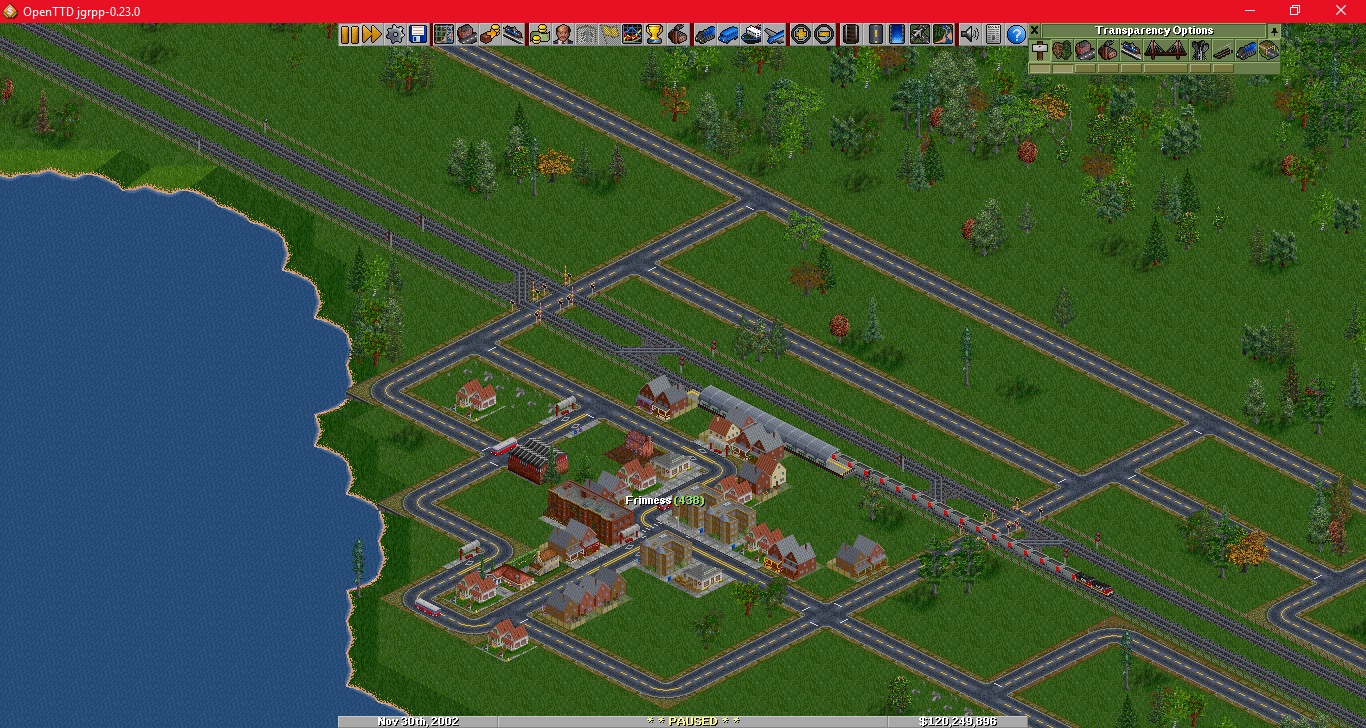 Definitely one way. The only times I use bi-directional track is for very low volume, temporary track...or both. If I think there will be much in the way of volume, I usually just build one track in each direction. As volume increases, I will begin adding passing zones in each direction. On track that will be high throughput from the get go in both directions it's two tracks in each direction connected to stations with dual inputs and outputs. These I build with a space between each pair of tracks in the same direction...like this "I II I". I do it this way, so that if the track gets really crazy, I can add an overtake line in the center in both directions. I then add switchers every 10 tiles in alternating directions with programmed pathfinder penalties on the overtake line. This way the trains only use the center line when necessary, and they tend to only stay on that track as long as necessary to pass an obstruction. Hundreds of trains can operate on long runs on this track with very little congestion. The trains I use for this tend to be 5ish tiles in length and as high performance as is available. Much longer, heavier, and/or slower, and they begin blocking one another when they switch tracks.
Top
Post Reply
12 posts • Page 1 of 1