How To: Generate Superb Heightmaps :)

Before importing the final greyscale, decide on what newGRFs to use, as it's very difficult to change this once you first saved your edited greyscale.

So decide what kind of scenario you want to make out of your greyscale, what industries should be there, everything. Especially if you work on a huge map, where a lot of work goes into landscaping and placing industries it can be a big slap in the face to discover you have to rework the scenario... from the ground up...

If you want to share your scenario then also keep the public in mind. Some people might really like to play your scenario but not with some 'out of theme' newGRFs or they want to keep the newGRFs to a minimum. Etc.

I have now started to do some concept development on my imported greyscale. Identifying the right locations of towns, rivers, industries and mountains and labeling them accordingly. Since you can create a greyscale out of your OTTD scenario, I might point out towns by raising mountains and lowering rivers, just incase I need to reload my newGRFs.

Then once I feel I'm confident with all the settings, I will start adding in all the cities, towns, hamlets, rivers and industries... O.o But for a student in town-planning and urban design, thats actually lots of fun. Hehe

I have worked my way through the tutorial (which was very easy to follow I may add) and came out with this: 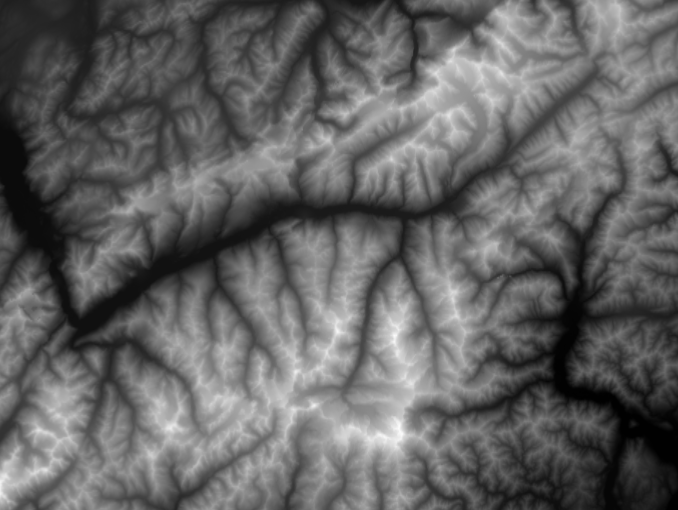 which is fine. Super.

However, I have a couple of questions:
Still, a really easy to read tutorial so thanks to all who contributed!
Total Alpine Replacement Set: Industry, Town, Objects
Top

If you want to tweak the map for use with MoreHeightLevels, you will have to recolor entirely by hand. While the heightmap program under MHL will recognize 256 shades of grey, DEM only generates 16 shades. Thinning the data under DEM won't create more resolution, it throws away data, so that won't help either.
Do you like drones, quadcopters & flying toys? Check out Drone Strike Force!

Without any thinning, the maximum resolution (zoomed to 1:1) is 1 pixel per about 90 meters of map area - more than enough, even for regional maps. To get the highest possible resolution, do these steps:
1. Open your downloaded ArcASCII file
2. subset your desired area (no thinning!)
3. click the "No zoom (1:1 view)" button

If that isn't enough for you, your only choice is to enlarge the heightmap image in an image editor and lose a bit of resolution. This isn't too bad, because it will only make your map a little "softer".

About more heightlevels... for me, the image output already has 256 shades of grey (much better book title

) and should work fine with the patch. I think, the tutorial may be a little outdated, using an older version of MicroDEM or something. It's not bad at all, but some of the steps are far from optimal.
Top

And there are some functions of Microdem that doesn't exist anymore...and I've forgot about the SRTM data which is pretty messed up as I've seen (no SRTM for upper Europe, some seas are without coastal terrain and the shape of the seas are square....etc.)
Train Videos
Follow me here: http://www.youtube.com/user/Sadguardian/videos?view=0

I never noticed these things about the SRTM data. It seems fine to me.
It only has some relatively small gaps that can easily be filled with any graphics programs. All the coastlines were fine in the maps I made (after adjusting the levels to work with openTTD, of course). The missing data above 60°N and below 60°S is a bit annoying, but there's still [url=hhttp://www.viewfinderpanoramas.org/Coverage%20 ... s_org3.htm]this page[/url] - don't know how good their data is, but it should work for us.

Could you please post an example of the data where you think it's messed up? I may be able to help you.

There'll be some updates to the tutorial soon... either MGSteve comes back to make some changes or I'll have to rewrite the whole thing, since I seem to be one of the few mapmaking gurus right now.
Top

I did give up after 2 weeks of trying to make an 2^4096 Europe heightmap...I know that there's already an Europe map but it doesn't deserve it's name because it doesn't include some same important Europe countries...after this attempt I tried to make an 2^4096 map with Hungary - Ukraine - Bulgaria and Romania but the SRTM data of the Black Sea it did show only square coasts not how actually should be...and unfortunately I didn't found someone to have the required time to do one of those so I did give up on that idea too

I've tried with editing an Europe map extracted from an World height map on 21000 x 10000 resolution but I did give up ending with the sea level higher or to low...
Train Videos
Follow me here: http://www.youtube.com/user/Sadguardian/videos?view=0

Oh well, that's neither your nor MicroDEM's fault.
There is just no good data above 60°N or below 60°S. The Black Sea, Caspian Sea and the Great Lakes in the US are also missing. Lakes and inland seas seem to be a big problem, especially if they're not exactly at sea level. The site I linked in my previous post isn't very helpful either. It has decent height data for the north and south, but it's somewhat more complicated to get the coastlines right.

There is a rather time consuming solution I just tried that involves some advanced image editing. See the attachment for results. I'll probably write a new tutorial for getting the perfect heightmap soon. MGSteve doesn't seem to be around anymore to edit this one.
For now, if you still want to make that Hungary-Ukraine-Bulgaria-Romania scenario, I could just quickly make a heightmap for you. Just say a word if you're interested. I'm always happy to help other mapmakers.

[edit]
Attached a heightmap of the whole world for everybody to use. I haven't downloaded the complete data for the extreme north and south yet, but I know how to make it into a working heightmap. Stay tuned for more.

[edit 2]
...and another example of what is possible with my (soon to be published) method of creating heightmaps: The first draft of the 2048x2048 Expanded Europe Scenario. So far it is automatically populated with 538 towns (every town with a real life population >100000). The original heightmap is 6500x6500 pixels. Could have made it bigger, but I don't see why anybody would need that.

I guess, the biggest interest was for Western Europe and less East Europe and Black Sea

If found an huge heightmap with whole World and I've tried editing with PS and Photoscape, converting to GreyScale and resizing with Irfanview but no luck. I did use the image posted down in this post.

Regarding to Europe, a heightmap 2^4096 with whole Europe (including Moscow), Black Sea, Istanbul, Cyprus, Scandinavia and British Isles, Spain and Portugal would be perfect !
I tried to reduce as much I could from the African continent, Atlantic Ocean and Nordic Sea to fit as much land I could but it was a bit impossible to do that...

The idea with HU-RO-UC-BG is that I wanted to make an Romanian heightmap (eventually with neighborhood countries because SRTM data was in that way) and I wanted remake my country infrastructure (better than nothing, because I couldn't find a good 2^4096 Europe map with desired countries)

The problem is that if I'll do a RO map I won't have any trainset and industry to place (everything was destroyed after 1989) so I would prefer Europe.

So does anyone have ready-to-use heightmaps to share? I'm not to pleased with what i find in the online content system (mostly they are to huge). I'm searching maps with sizes like 512(1024)x1024(512)
Top

Ok, so what am I doing wrong with the GE plugin?
I've installed it, and ckecked the boxes "SRTM4.1" and "elevation" but I dont get any green dots to download data from

Magicool wrote:Ok, so what am I doing wrong with the GE plugin?
I've installed it, and ckecked the boxes "SRTM4.1" and "elevation" but I dont get any green dots to download data from

I had the same problem. It seems that the plug in doesn't work anymore. Anyway I've gived up.

Go directly to the STRM site and download the files you need manually:

Does anyone know if there is a Mac version (or equivalent) to MicroDem?

I'm trying to create a 4096x4096 map of The Netherlands, but I'm using a Mac. I have GE and Photoshop, so only missing MicroDem.

Thanks
A Planeset Painter
Top

Thanks very much for your valuable information. I appreciate it.
Top

Guys,
Can anyone shed any light on how to accurately place cities on a 2048*2048 map.
Ive managed to create a near perfect heightmap but accurately placing towns and cities is becoming a real pain. Ive only found one guide on here using an overlay and mspaint but just cant figure out how to get the co-ordinates to match.
Any help appreciated
Cheers guys
Steve
Top


I'm trying to get this kind of map of the Netherlands.. a certain area called "Randstad". It includes the cities of Amsterdam, Rotterdam, Utrecht and Den Haag. (also some smaller, nearby cities).

I can't manage to get it right. My computer isn't built for it....

My question: is there anyone who can help, or is it too much work to do?

Making an accurate map is not something you can do on the first attempt, you need to try and experiment, and probably fail and try again a few times.

If you don't have the patience for that, there is a dutch scenario you can use. The Randstad is on it, just ignore all other parts

The plugin for Google earth seems to not working with current GE version.

Can someone say me which version of GE to use ?
Is the tuto up to date ?

You can use Photoshop to generate only the height map? Or other software is needed?

The photoshop 2014 has a work that is gradient map, that work for that function?

In that website is a good database of maps to use?

You can use any software you choose to edit.
Do you like drones, quadcopters & flying toys? Check out Drone Strike Force!