sevenfm wrote: ↑19 Dec 2020 17:17 Timberwolf don't you think default depot sizes are a bit too huge/high, especially compared to buildings around?
That's the reason I use smaller depot variant for road vehicles, in my opinion it fits much better. What do you think?

In 26 years I'd never noticed this about the Simon Foster depot... but yes, now I look it's quite outsize! Transport Tycoon scales are all over the place (even before idiots like me start adding overscale trains into the mix), I always feel you end up chasing your tail trying to fix them so I tend to just stick with the same sizes as the original objects. The way I'd consider solving it is:

1. Make the depot buildings more impressive to match their size, the 1890-1936 depot looks a lot more natural because it's based on a much larger real-world prototype.
2. Build a town set that fixes some of the most underscale buildings such as the three-story "modern" flatblock.

Maybe I'll have a play around with the depots, past a certain point you end up with something too small to realistically contain a double decker bus or line up with the standard catenary so it might be more of an approach of making the buildings look like they represent a larger and more impressive prototype.

Kamnet, I think this might be one of the divisive elements of the set

. Personally I think a lot of roadsets look too flat, they are technically more accurate than the original roads when you consider the height of a house but I prefer the exaggerated effect. Ignoring my own opinion, I'm currently about equal in comments for and against the curvature

. For some reason it does look a little too strong on the non-junction corner, maybe I might see about toning that down if it starts annoying me.
Top

Timberwolf, you've done it again. First road vehicles, then trains, follow by stations and now, you have expanded to roads. I'm wondering if ships and airplanes are next on the list?
Top

Timberwolf by saying depots too big I don't mean realism, but the look and feel of original depots. For some reason the depot variant I posted is not really much smaller but it fits better visually, maybe because of it's design.
Also I have to agree about road curve, it looks too bulgy, it would work great for some comic/toyland set probably, but not for regular "realistic" landscape. And cobblestone in my opinion has too big stones, too, would look better with smaller pixels I think.
Top

sevenfm wrote: Also I have to agree about road curve, it looks too bulgy, it would work great for some comic/toyland set probably, but not for regular "realistic" landscape. And cobblestone in my opinion has too big stones, too, would look better with smaller pixels I think.

Can I also add to the annoyance?


sevenfm wrote: Also I have to agree about road curve, it looks too bulgy, it would work great for some comic/toyland set probably, but not for regular "realistic" landscape. And cobblestone in my opinion has too big stones, too, would look better with smaller pixels I think.

I noticed that too, but with less pixels, IMO it wouldn't look like a cobblestone (more accurate is 'sett' or 'sampietrini') anymore.
We 'd better think that they are flagstones and then they have the proper dimensions. Problem solved! 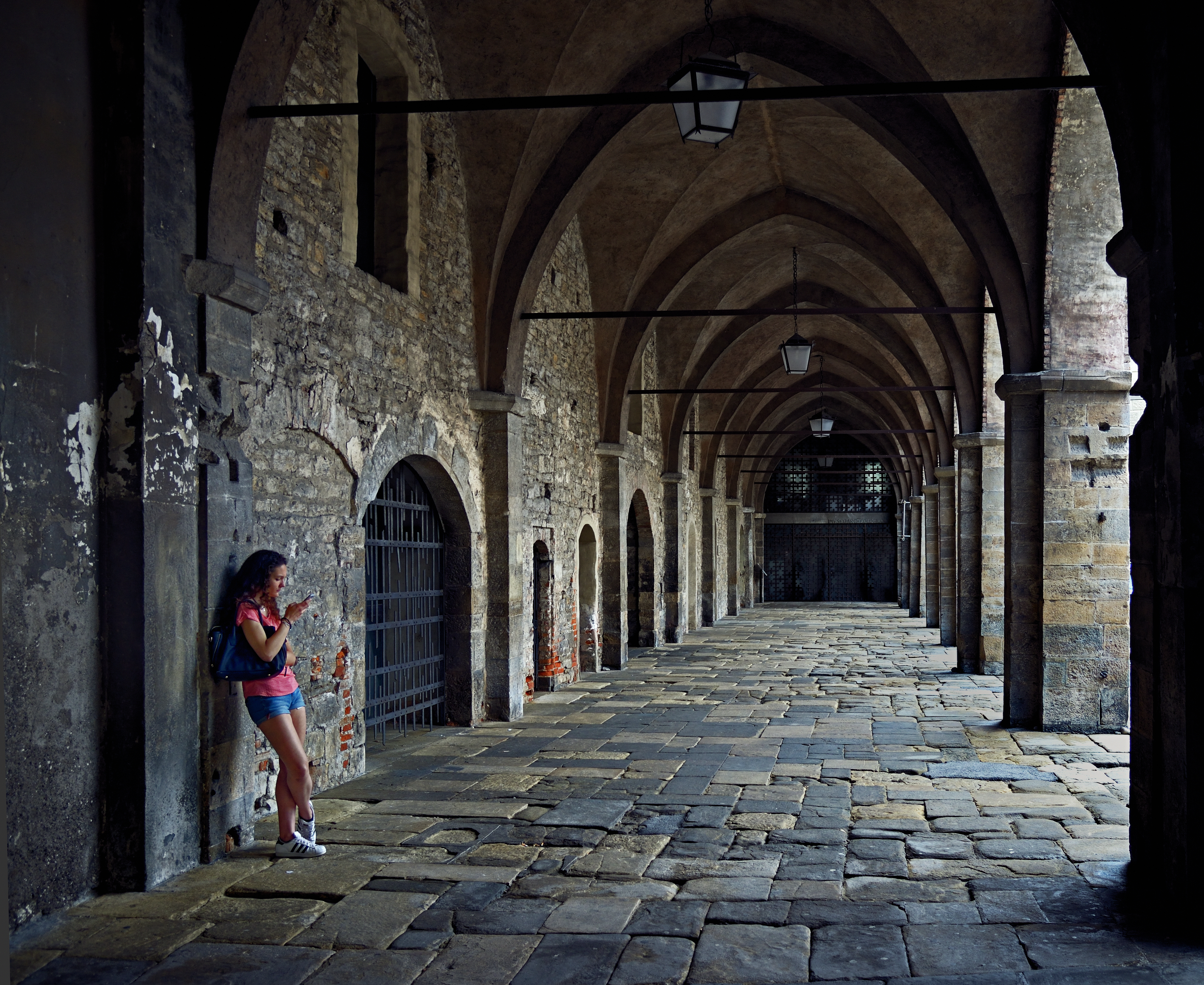 So... road crown height. Which of these do people prefer?

I have a preference (and interestingly having done the exercise, it's not the original), I'd like to see which is the most popular.

On the setts, perverted monkey spotted what I spent hours scaling models up and down to solve. The stones in most 1x sets that offer sett or cobble roads are oversized, often massively, because it's necessary in order to have even the definition of a single pixel. When you scale that up to 2x, suddenly they start looking very big despite still being in the same proportions. The size I ended up with is a compromise between workable 1x and 2x zooms, and personally I like the slightly caricatured look.

(Cobbles are a little large though, maybe those can be shrunk a bit as the colour variation will still work at 1x)
Top

That's about where I was at, as soon as I started rendering the different profiles I preferred Option C, then even starting to prefer Option D.

As it seems I can work faster than people can reply, I've gone with that latter option as the new road profile. It applies to everything - I also reduced the size of the alternate "cobble" surface for early tracks as it was possible without losing too much definition. Results of the update: 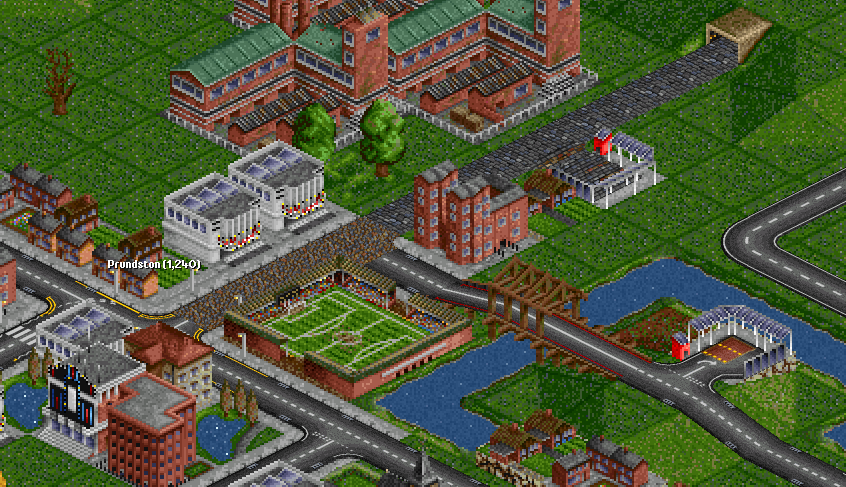 Finally, I realised I'd missed having custom map colours for the different road types. I've added that now - the differences are subtle, but allow you to see what type of road is where when deciding if a speed limit upgrade is required.

So far, they look beautiful

I just played a game with your roads when some of the towns started to die out. When checking what caused the issue, I found out it was because of changing the town roads to "A Road Construction". I wanted to give you bug report when I found on your github that it is intentional

I would suggest to expose this information to the road selection list, because after changing a town to this road, it will not allow to change it back to a lower speed one resulting in a dead town...

It's in the README (which of course no-one, me included, ever reads for a grf)... not sure how you surface it in a way which doesn't make the menu massive, though!

If you want a bit of a cheat, towns will build houses alongside B-roads, which I put in to allow some nice rural villages. Of course the pro move is mixing A road and Motorway with the regular town roads in just the right grid to allow every spare tile to have a building on it

Good morning, the one-way symbols for the down/right direction are showing up as the no-entry logo. Using v1.0.1

Hello, just wondering if the color rocks should be brown/reddish or stick with some gray variation on the crossings, seem a little distracting if have many of them.

Surprised to find I actually like that more than the original. 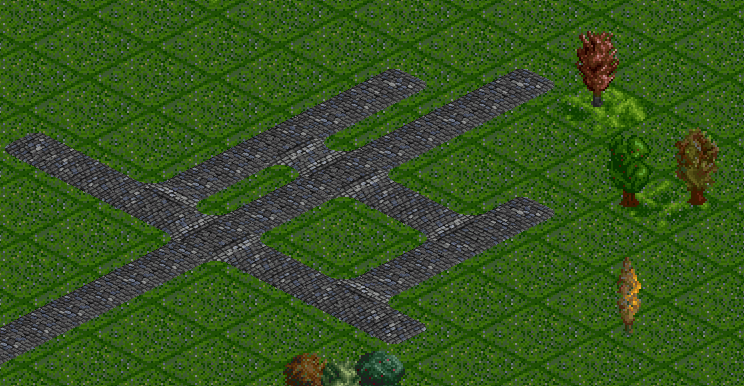 Uploaded a new version 1.0.3. This also improves outbound compatibility for multiple roadtype situations, although I don't define these roadtypes myself you can now use stagecoaches on BRIC, GRVL and OFFR roads from other roadsets.

(If there's enough demand I might extend that to support the sets with publicly-available source code where I can get a good idea what roadtypes they have and what they mean, but for now this at least gets people out of the hole of being unable to build stagecoaches for the roads they have available in the 1800s in multiple-roadset situations)
Top

It looks better this way, it was a bit like broken before

For the second time, the city disrupted my tram turntable. I haven't noticed it with another road set yet.
Top

Have you got a before/after screenshot? It's not clear what you mean... there may be some odd interaction between NRT and the labels I've used, but difficult to figure out what without an example of exactly what happened and why the behaviour is broken.
Top

When that happens again, I'll try a screenshot, city building a barracks across the dorm.
But I'm not sure if it was my fault, I'm tracking it,
Google Translate is a donkey, sorry for the confused sentences

Important whether you have options in Ngrf parameters that the higway is free from buildings, if not you whant to do it?
Top
Post Reply
39 posts

Users browsing this forum: No registered users and 22 guests