Oasa 901 HD12 was the first post socialistic high-deck luxury coach designed 1990 by a bus repair workshop and produced 1990-1994. It was built on the wheelbase of Karosa with Liaz ML640 engine.

Finished the livery refits for this one today. 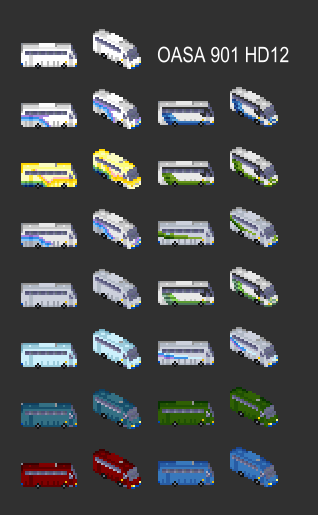 Just a update, if all goes well, the B part containing buses and coaches from 70s till 2000 will be released this month. I don't have a precise date yet, but am getting close.
My project: CS Bus Set viewtopic.php?f=26&t=87962

I am actually curious about your B part!
With best regards,
Špajdy.

As an example of newly done graphics, this time I am posting some low-capacity vehicles:

So I finished the Robur, Ikarus 553 and 543 drawings with refits, done all the refits for C935 an for C943 and even added the Skoda-Lahti 402 Cz-C, so I consider the regional buses graphically done and will proceed to coding of the regional buses file. I didn't do much for the long-distance set, finished the FR1 drawing and did one refit for it, but it needs much more love still. Iliade has the base from FR1 (after all it's just a facelift of the FR1), yet I still need to complete details. I will also need to compare all the high decks to see if any need fixing compared to others height-wise (note for myself: Next time do that prior to doing refits).

I also had fixed the Ikarus 280.08, 280.10 and 280.87 buses, as they were thinner then my other buses both in roofs and front/back + had different shading, which made them look much smaller. The result isn't perfect (due to the fact they are 16,5m long compared to modern 18m long buses and their dark livery they will always look smaller), but it is better.

I also dug some more into the low capacity buses/coaches during socialism. All of them (Robur, Ikarus 553, 543 and Chavdar) were mostly used as charters and for long distance routes for various non-transport companies, as their company coach for vacations of workers, or transport to various work related travels. Their use in public transport was minimal, yet it was documented. Despite intended for Long distance, I will redistribute them into regional, as that is where they were used in public transport.

And here some more sprites for you! 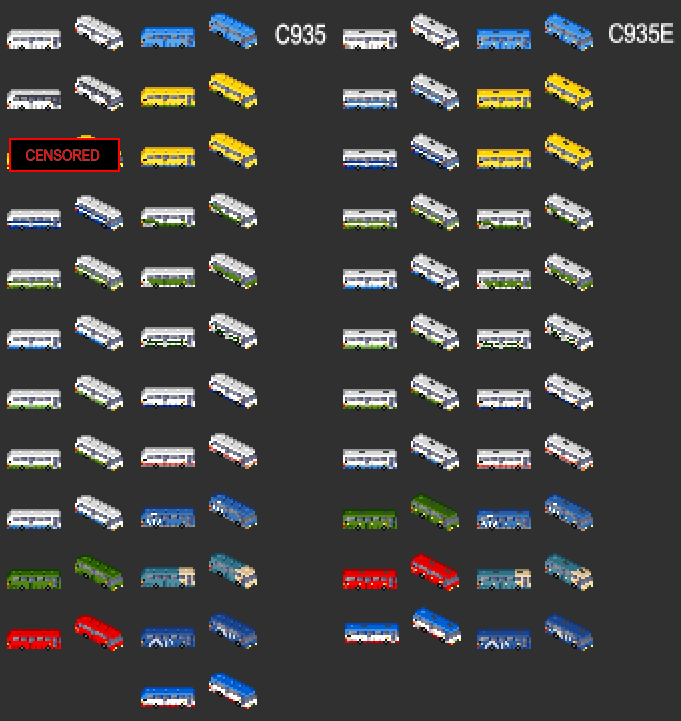 Unfortunately I will have to postpone the release of the buses and coaches from sixties till 2000. I hit a few ugly mines in my code, which caused bugs and delays.

Still, there is progress.
Urban bus file is coded, fixed code issue, that caused random refits triggered by time, fixed code issue, that caused articulated buses to run through randomiser for each part separately, causing the bus to have each part with different livery, adjusted the S11 graphics per feedback. Ikarus 283 needs to be fixed (roof thickness, width of the fronts, etc), also power and capacities of articulated buses need to be fixed. Balancing still needs to be done, but for that I need all three files finished.
Suburban coach file is also coded. The above code issues still arent fully fixed with the articulated coaches. Mini buses need bounding boxes and road alignment corrected.
Long distance coaches are partially coded, the comparation of sizes of various high deck types was done and thankfully no rework is needed. Slovbus SB135 needs AC on roof added, Renault FR1 already has most refits done, work on refits for Karosa HD12, GT11 and LC936 has not progressed mostly due to the needed reworks on the code.
My project: CS Bus Set viewtopic.php?f=26&t=87962

I din't do much last days, namely on the long distance coaches - I was pretty demotivated as my Firefox crashed and with it all my researched pictures for HD12 liveries. Doing these researches consumes an awful lot of time and last days were pretty demanding on time. So I at least fixed the LC936 roofs, so now I will be able to work on the livery refits for the 936 as well. I had to do something different due to the HD12 block and something to fix my mood, so I finally gotten to doodle some early-early pre-WWI buses. So I got now a couple buses started from the period 1900-1914 for the next update & expansion of the already released set. 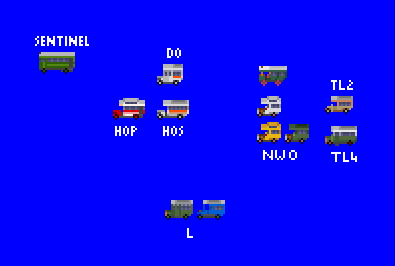 Sentinel belongs to Skoda
HOP, HOS and DO are Laurin and Klement
O, TL2, TL4 and the steam bus from 1900 are from NW (former name for Tatra)
L belongs to Praga

Hey everyone, time for an update on the progress.

For the long distance coaches file - for the Karosa HD12, GT11, LC936 and Renault FR1 all refits are now completed. The air condition on Slovbus SB135 roof has been fixed. The only graphics work that needs to be done are refits for Renault/Irisbus Iliade (a facelift of FR1), which is still missing 4-5 refits at most. From the coding perspective, the code is yet missing switches built for some 7 coaches. Language file also has to be updated. Once that is done, the file can be compiled into a GRF. The next step will be the bounding box alignment to properly align the coaches on the road. Once that is done the balancing of all three files will need to be done to set prices, runing costs, reliability and cargo value decays. After that and some testing the three B files (buses and coaches from 70ies till 2001) can be released.

The already released A file (1914-60ies) had more trouble reported, I did a couple fixes already (fixed file not yet released) but there will need to be a lot more reworks done, so once the B package is released, the A one will need to get some rework. With that I also plan to add some new buses to the set. The list is below:
1900-1914:
NW steam bus
NW O
NW TL2
NW TL4
Laurin & Klement HOP
Laurin & Klement HOS
Laurin & Klement DO
Praga L

Some of the newly added buses/coaches are already completelly drawn, others exist in side views or multiple views, yet incomplete. I will first release the fixes and what I got complete, then will be adding those I still have not finished, to speed up the release of the fixes.

And finally... You sure have noticed a slow down in my work on the B package. It is caused by increase of work at my job and some more demanding family life recently. But there is also another reason an that is exhaustion. For the couple of last months I have spent most of my free time drawing and coding buses and I had to slow down a little to avoid a burnout. So I have worked on something other for OpenTTD when I felt too overwhelmed by buses and coaches. Trucks. It is very early to show you more than a couple of views, but here you go. 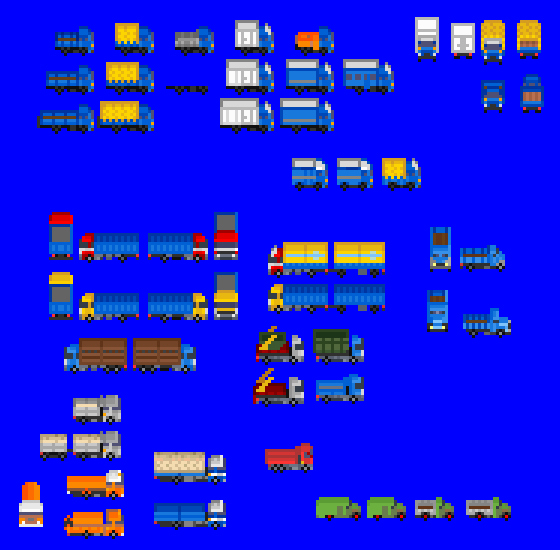 Also, we talked with Spajdy about trams and joining our efforts to not duplicate work and the result is an agreed scale and rules with which we will be doing a tram set together. As a test 7 proof of the concept, I did a couple of tram doodles, have this Bratislava GANZ from the year 1910 with a couple of realistic livery options: 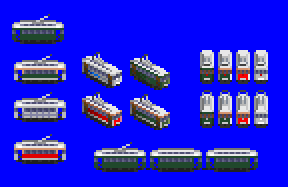 At your ease.
Top

I am excited to tell you that all graphics is now drawn and all buses/coaches coded for the B-package. I am currently debugging the code and once I am happy with it, I will do the balancing and release.

The package consists of three files, as announced earlier, but I have redesigned the vehicle distribution. When I coded all three files as originally announced, I realized it really doesn§t look good ordered based on the bus use, as all city buses were one under another, then there were all the regional an the last were all long distance ones. It looked messy given the fact the original A-package that is released was ordered based on year prouced. And to order it, you woul have to use the filters and I disliked that, as I think you should not have to do changes right when you run the game.

Also, the distribution was very uneven. The long distance set was full at a bordering capacity, while the regional file was half-empty. So I re-orered it based on the year produced and I am now happy with it. As a result, I was able to fit in 6 more Sor types, even with some reserve. An the last file has capacity to be updated later with more types.

So this is it

Or you can download CSBusSetN7.2B1 - B3 directly in the game.

The files still are only in English, I am working on expanding to more languages (slovak, czech), but it may take a couple days.

The next steps beside the language translations will be to revise the A package, correct all the issues that have been reported to me, do the code corrections and upgrades and add some more early game buses. And also I will proceed with the trucks some.
My project: CS Bus Set viewtopic.php?f=26&t=87962